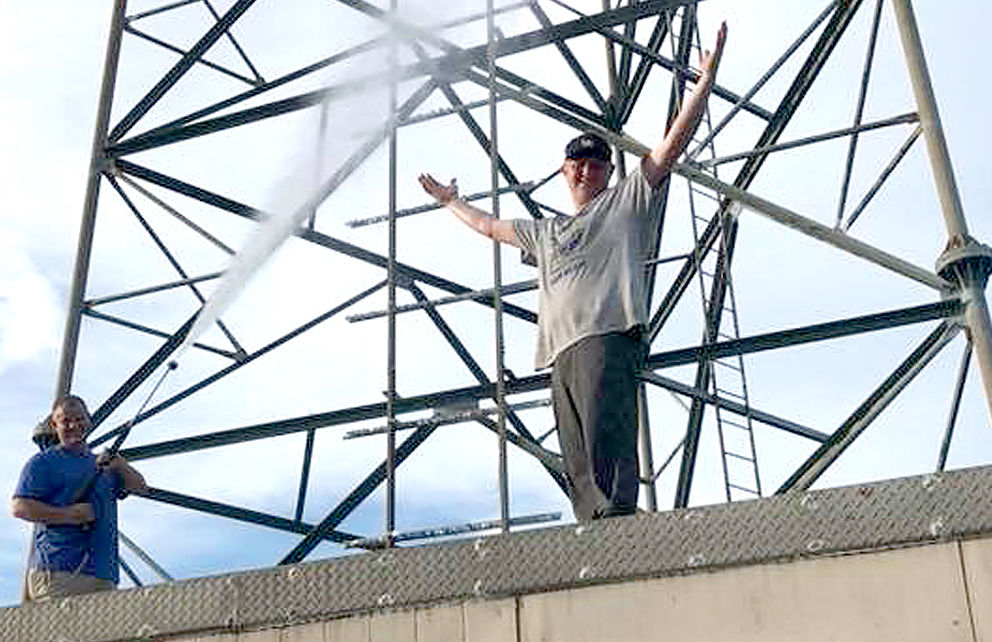 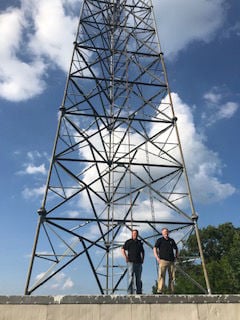 The co-founders of Bluegrass Fiber stand proudly in front of their first tower in Bald Knob. The two purchased the tower in the summer of 2018. Since then, the partners have maintained it themselves — meaning they are forced to climb it. "Learning all the systems was pretty tough," said Collins. "But the hardest thing might have just been going 200 feet in the air!"

The co-founders of Bluegrass Fiber stand proudly in front of their first tower in Bald Knob. The two purchased the tower in the summer of 2018. Since then, the partners have maintained it themselves — meaning they are forced to climb it. "Learning all the systems was pretty tough," said Collins. "But the hardest thing might have just been going 200 feet in the air!"

Collins and his partner, Michael Shaw, also of Frankfort, realize the necessity of internet access in today's world. So when Shaw discovered Collins had no WiFi or internet access in his home on Bridgeport Benson Road, the two decided to take matters into their own hands.

"When we started talking about how Roy didn't have internet," said Shaw, "I just thought that was crazy. So at first, we decided to try and shoot internet from my house to his."

After experimenting with ways to bring internet to Collins' home, the two saw an opportunity to improve their community by providing high-speed connection for rural areas. Prior to the establishing their Wireless Internet Service Provider (WISP) company, Bluegrass Fiber, county residents, especially those who live outside the Frankfort Plant Board's service area, had few options for broadband access to the internet.

"It's important that rural people have choices," said Collins. "Not just one single internet provider."

Collins and Shaw ventured into uncharted territory last summer when they purchased a 200-foot tower in Bald Knob. Wireless broadband service in isolated areas had not been attempted before in the county. Recent advancements in technology made the idea feasible, but the process of kickstarting the WISP took commitment.

"We leased a tower on Bald Knob that was in pretty bad condition," said Shaw. "We had to clear all the weeds, replace the flooring in the building — but once we found the tower, we started researching, ordering climbing gear and really getting things going."

The two launched their company in October. While the original mission was to bring wireless broadband service to the county, after extensive research, trial and a few obstacles, Shaw and Collins have expanded their area of coverage to residents in Farmdale, Flat Creek and even parts of Lawrenceburg.

All of Bluegrass Fiber's plans include a $100 setup fee.

"Internet is almost a utility in today's world, like water or electric," said Shaw. "One woman told me, 'I knew it would be fast, but I didn't think it'd be this fast!' It's rewarding to see a customer's face light up when they realize they have a fast, secure internet connection."

The two co-partners handle all aspects of the operation, from installation and maintenance to climbing their 200-foot tower.

"Everything is automated, meaning we can control it from our phones," Collins said. "A customer can just text us if something is wrong, and we can reset their connection through our phones. There's also a customer app where they can find anything they might need."