Following a warehouse fire this summer that caused bourbon to spill into the Kentucky River, Jim Beam Brands Co. will pay fines to the state of Kentucky.

Jim Beam agreed to pay the fine, which amounted to $600,000 in civil penalties as well as a reimbursement to the state of $112,000, according to an agreed order from the Kentucky Energy and Environment Cabinet that was signed on Dec. 6. The payments are due within 30 days of the execution of the order.

The fire happened the night of July 2 at a Jim Beam warehouse on McCracken Pike in Woodford County, destroying 45,000 barrels of young bourbon and spilling debris into nearby Glenns Creek. A 23-mile plume of alcohol later made its way through the Kentucky River. It was out of Franklin County by July 7.

By Friday of that week, Franklin County residents noticed dead fish in the river, bourbon foam and other debris from the fire moving through the Kentucky River. Lowered oxygen levels in the river led to fish kills. Kevin Kelly, a spokesman for Fish and Wildlife, said Monday that the department estimated 120,170 fish died and populations of 26 species were affected.

Customers of the Frankfort Plant Board and Peaks Mill Water District reported after the fire that there was an odd odor and taste coming from their water. 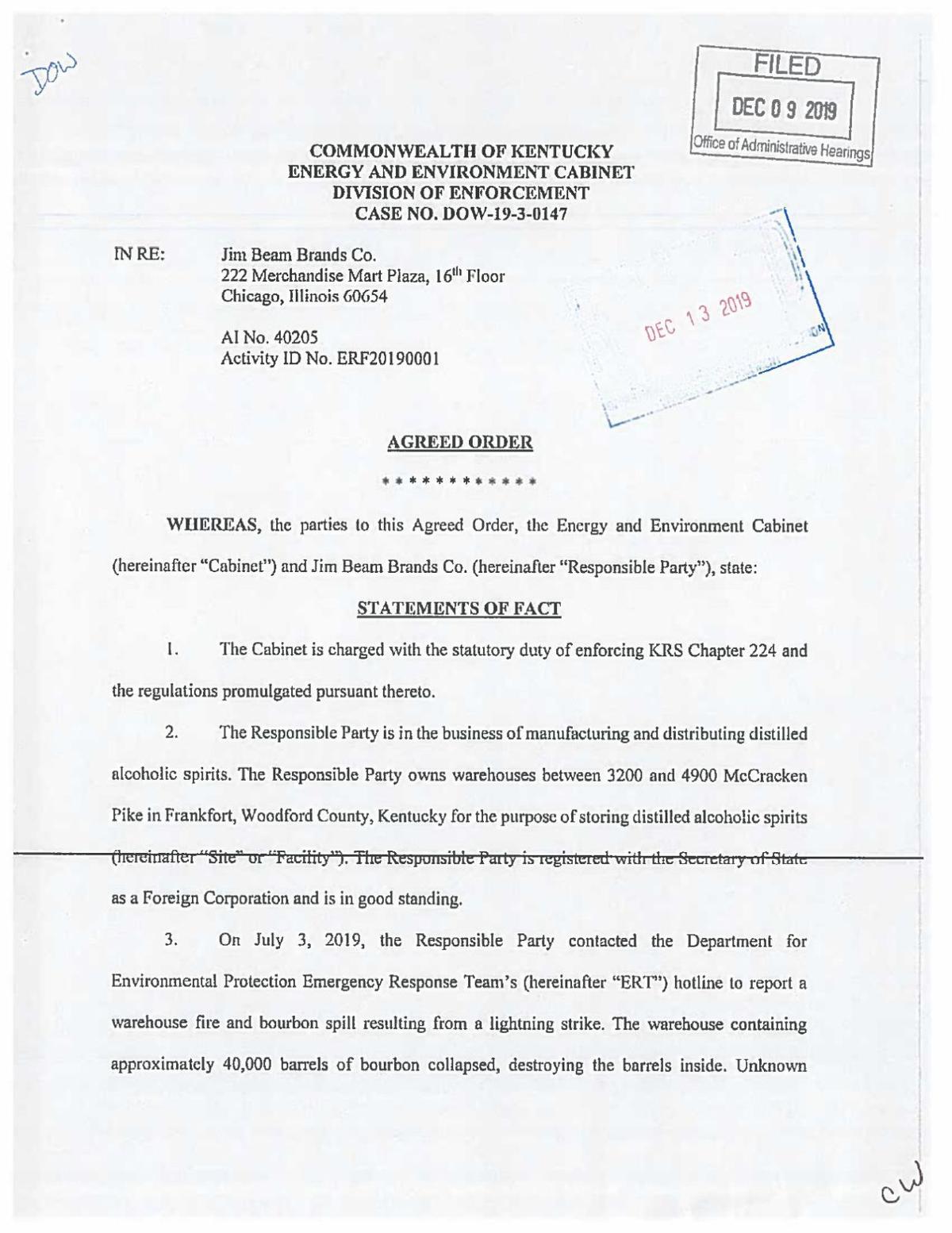 According to the agreed order, the Kentucky Department of Fish and Wildlife Resources investigated a fish kill along approximately 62 miles of Glenns Creek and the Kentucky River. Responders from the Environmental Protection Emergency Response Team and an inspector from the Kentucky Division of Water were dispatched shortly after the fire. The ERT and Jim Beam monitored water for dissolved oxygen, pH and temperature as well as took samples for ethanol and chemical oxygen demand.

“Significant impact to Glenns Creek and the Kentucky River was documented,” the agreed order said.

In addition to the fines, the agreed order outlines remedial measures that Jim Beam must take, such as showing documentation of proper disposal of waste from the fire and creating a corrective action plan in the future. The order has a section on other remedial measures, which includes that if any ethanol is detected on property not owned or leased by Jim Beam, the company must notify the cabinet within 48 hours.

In a statement to The State Journal, Jim Beam acknowledged that it worked closely with emergency management personnel in Franklin and Woodford counties, the counties of Owen and Carroll, the KEEC and the EPA.

“While we were able to minimize impacts to the surrounding environment and wildlife — including by deploying aerators in nearby creeks and the Kentucky River, fire suppression and containment strategies to minimize runoff, and ongoing water sampling and water field screening — we recognize the regrettable and unavoidable impacts of the incident and have been committed to doing what we can to restore the environment,” the statement said. “That includes making payments to the state to compensate for time spent, resources utilized and costs to supplement the local fish population. We are pleased that the spirit of cooperation we've pursued throughout has extended to an agreement on the payments the company will make. Amidst the challenge and heartbreak of the lightning strike, ensuing fire and resulting impacts, we will always remain grateful for many things: the fact that no one was hurt, the unsurpassed courage of the first responders, the inspiring support of the community and the natural beauty of Kentucky that we're all committed to protecting.”

Risk of coronavirus is low, but Franklin County is prepared

Ask the City Commission Candidates: Discuss an important issue for Frankfort that not enough people are talking about.

Double-issue of FRANK. magazine to be included in Friday's State Journal

Registration for Easter at the Trace opens March 5

Should the Frankfort City Commission pursue a conservation easement as a means of permanently banning bicycles in Leslie Morris Park?