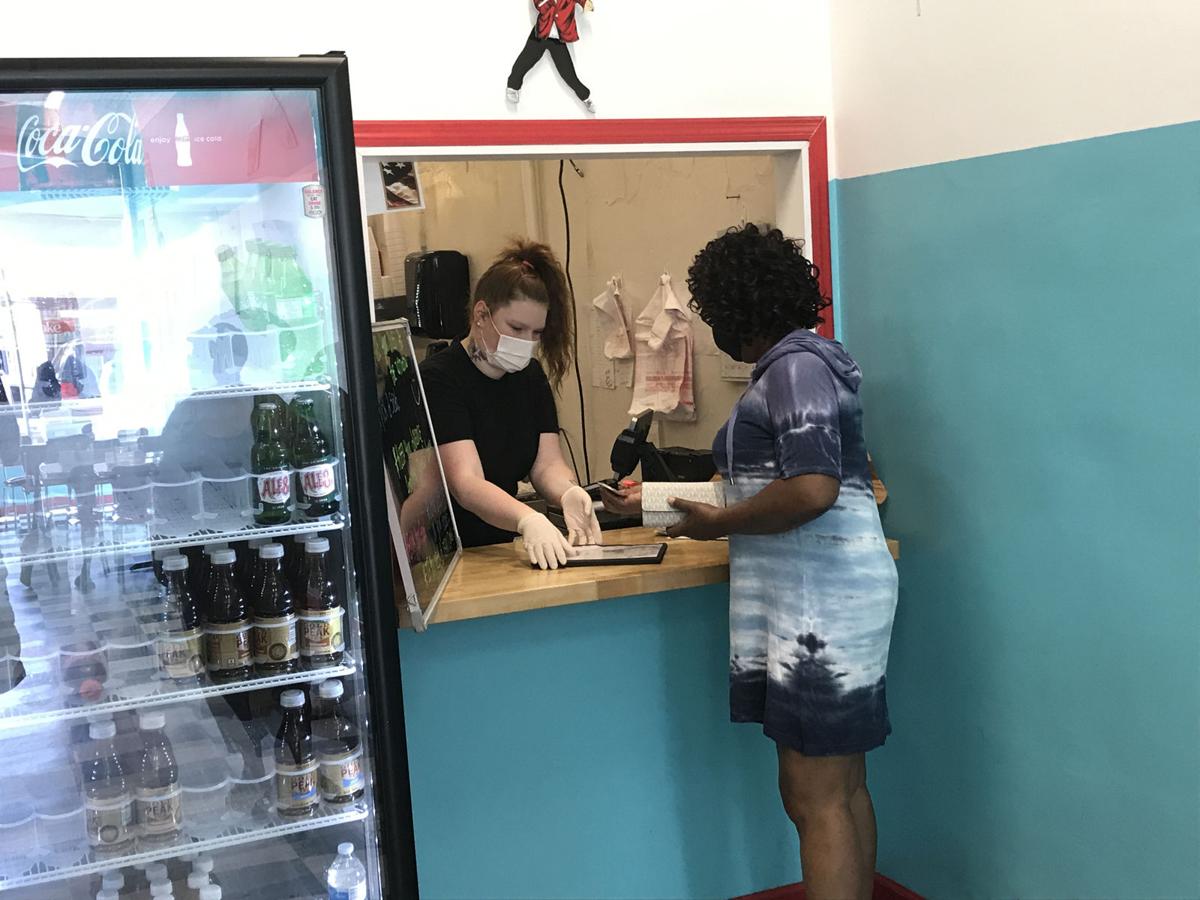 Monica Webb places her breakfast order Saturday at the Main Street Diner. Saturday was one of the few times she had been out to eat since restaurants were allowed to resume inside dining. (Photo by Fred Petke) 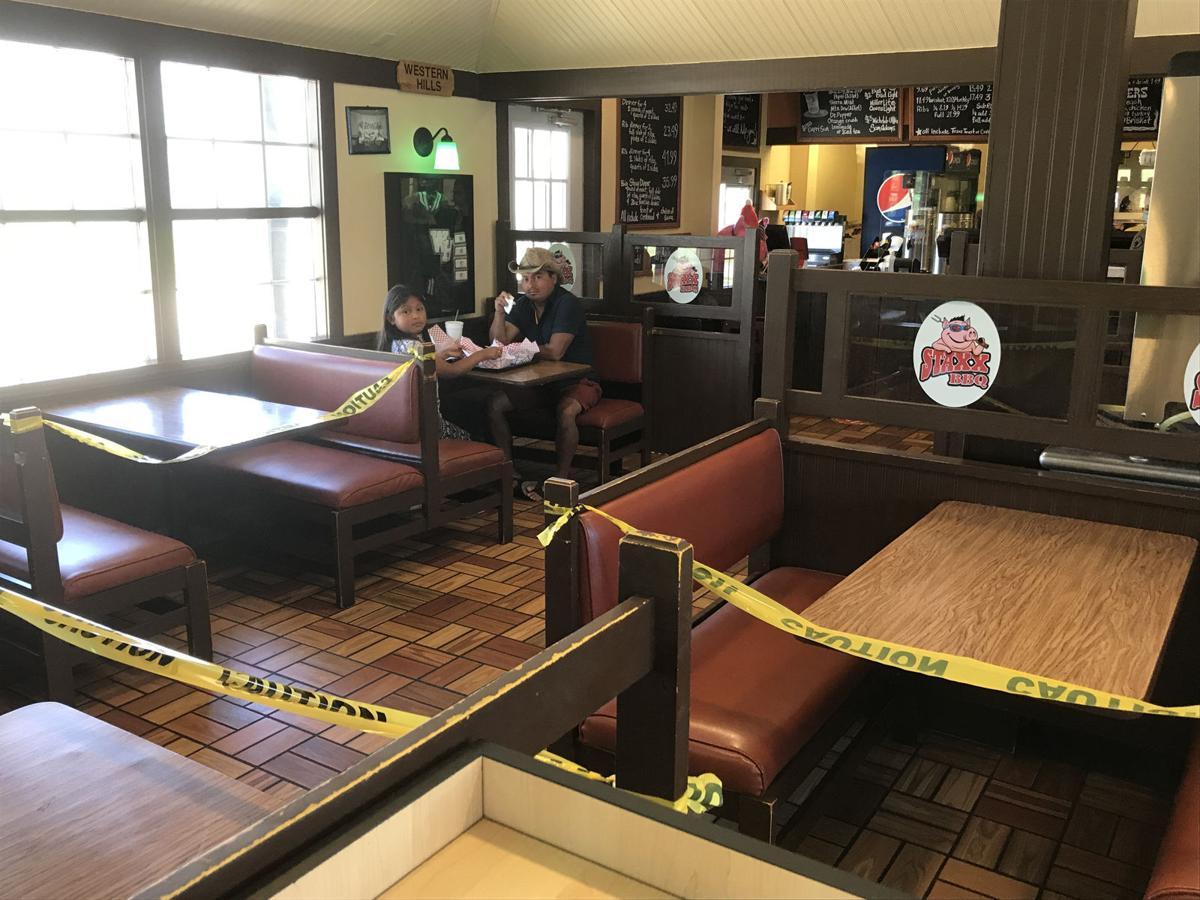 Adrian and Alondra Vela have lunch in one of the available booths at Staxx BBQ Saturday. Restaurants were recently allowed to reopen for dine-in service at one-third capacity. (Photo by Fred Petke) 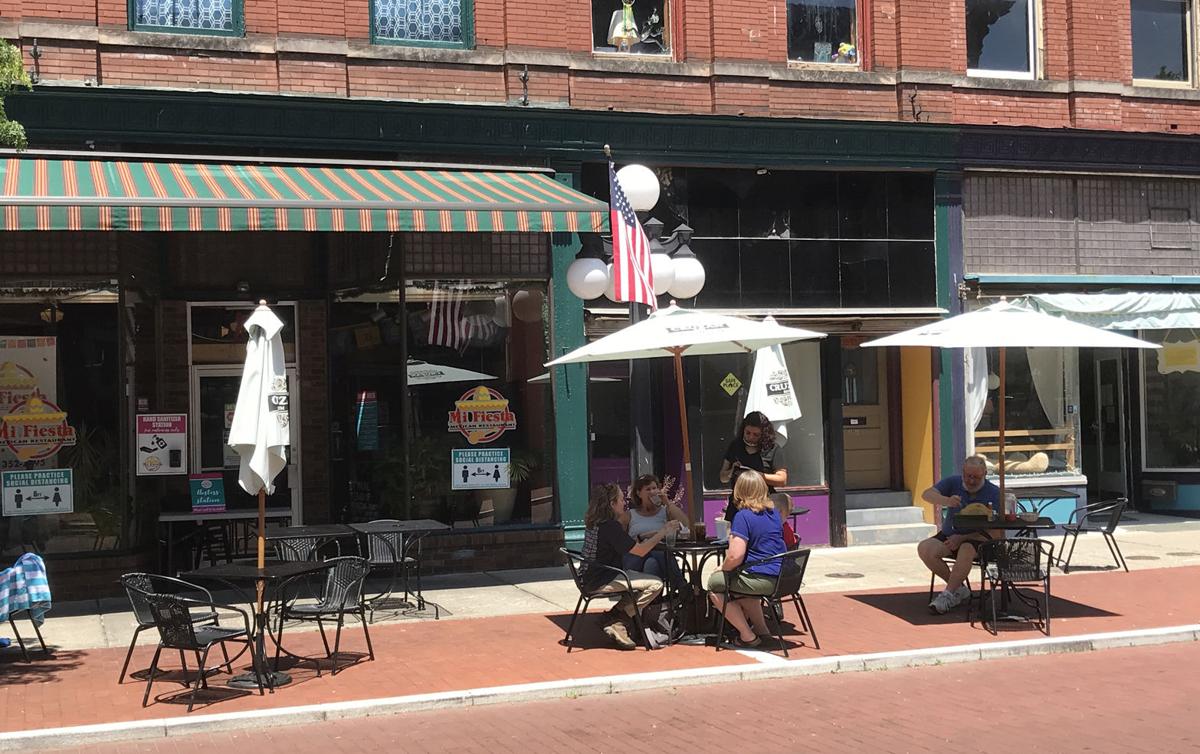 Diners at Mi Fiesta in downtown Frankfort enjoy the late spring sunshine while placing their order Saturday. Restaurants were recently allowed to re-open to inside dining and outside dining, within social distancing guidelines. (Photo by Fred Petke)

Monica Webb places her breakfast order Saturday at the Main Street Diner. Saturday was one of the few times she had been out to eat since restaurants were allowed to resume inside dining. (Photo by Fred Petke)

Adrian and Alondra Vela have lunch in one of the available booths at Staxx BBQ Saturday. Restaurants were recently allowed to reopen for dine-in service at one-third capacity. (Photo by Fred Petke)

Diners at Mi Fiesta in downtown Frankfort enjoy the late spring sunshine while placing their order Saturday. Restaurants were recently allowed to re-open to inside dining and outside dining, within social distancing guidelines. (Photo by Fred Petke)

Three weeks after restaurants in Kentucky were allowed to reopen their dining rooms, business is picking up for Frankfort restaurants, though there is still a way to go.

Saturday, the sidewalk in front of Mi Fiesta in downtown Frankfort was filling with patrons for lunch. The owners, Ismael and Raquel Valladares, were enjoying a busier sunny afternoon.

“Everyone loves the outdoor seating,” Ismael said. “The first thing they’ll take is outside.”

The difference from pre-coronavirus business is stark.

“It’s been slow,” he said. “I used to keep four waiters for lunch. Now I keep one. Lunch is very slow. What will help us is if they get all the state workers back in their offices. They will come out and eat.”

A couple of blocks away, a handful of people were inside the Main Street Diner enjoying a late breakfast Saturday. One of those was Monica Webb, who was trying the diner for the first time.

“I’ve been a few places,” she said. “Most just require a mask when you come in. It’s good. It’s the new norm.”

John Moschella, one of the diner’s owners, said business has shifted again with open dining rooms.

“Being at one-third capacity, it limits us,” he said. “The delivery (business) has gone down. We’re waiting for 50 percent.”

The diner has a capacity of 48 people, he said. Presently, it is limited to 16. Tables have been moved upstairs, but are ready to come back for the next phase later this month.

Not having dining room service allowed the owners to do some work at the diner as well as at the Riverboat Grill, which they also own.

Meeting the state’s guidelines has meant some extra work and, for some, adding staff to keep up with cleaning.

Staxx BBQ owner Dan Liebman said he’s added people to help keep up with cleaning and disinfecting at his restaurant. One-third capacity and adding picnic tables outside have helped, but there are a lot of added expenses with running a restaurant during the pandemic.

Inside Staxx, some booths are closed with yellow tape. Everything has been removed from the tables, including barbecue sauce and salt and pepper shakers. The pitchers of tea have been removed as well, he said, to eliminate the potential of items touched by multiple people.

Liebman said he was cautious about reopening the dining room, but said customers have been happy he did.

“I was hesitant, and I’m nervous,” he said. “I think you have to get back to people feeling comfortable about coming inside.

“I think the people coming in are universally so happy … to be back inside a restaurant.”

Webb said she has been cautious about returning to restaurants.

“It took a minute,” she said. “My mother was skeptical about going out, but she’s opened up to it. Concerned, but not worried.”

Moschella said the Riverboat opened later than normal this year, but its location has helped its business. Being on the river, boaters are able to dock outside and eat in their boats, all within social distancing guidelines.

“Everyone got their stimulus payments and bought cheap boats,” he said.

Like Valladares, Moschella said the return of state workers will only help his business.

“With the state workers coming back, we’re starting to see more (people) at breakfast,” he said.

All three owners said strong support from the community helped carry them through the last couple months.

“I really want to thank all our loyal customers,” Valladares said. “I can feel them supporting us. I have no words to thank them.”

“People have been so supportive of all our local restaurants and businesses,” Liebman said. “It’s impossible to thank them enough.”

“This city has taken care of its restaurants,” Moschella said. “That’s been phenomenal. We are fortunate for that. I’ve seen a lot of small businesses close this year.”