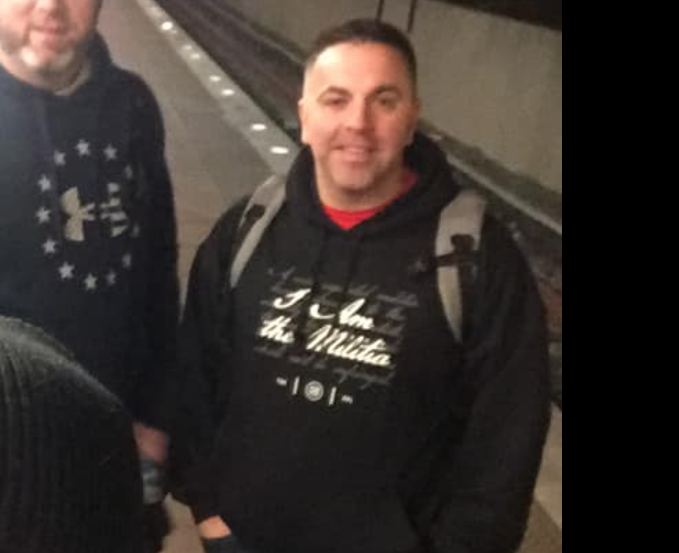 Jeff Farmer is shown above wearing a sweatshirt that reads "I am the militia" on the day of his attendance at the infamous pro-Trump rally that ended in a mob siege of the U.S. Capitol. The sweatshirt does not appear to be associated with any specific militia. (photo submitted)

In posts linked to his since-deleted Facebook page, embattled Franklin County Sheriff’s Deputy Jeff Farmer wore a sweatshirt with the words “I Am the Militia” and questioned whether rioters who sieged the U.S. Capitol were Donald Trump supporters.

These details were included in a fair amount of content released about Farmer’s attendance at the pro-Trump rally in Washington, D.C., that turned into a mob siege of the U.S. Capitol Building last week — much of it released by Farmer himself.

Between an interview with Lexington television station LEX18 the day after the event and several Facebook posts by Farmer and friends, Farmer expressed both his excitement in the lead-up to the event and his disappointment in the violent turn it took.

Farmer, who is a detective, told The State Journal that his attorneys have advised him not to comment on the matter, or the internal investigation into his conduct that Franklin County Sheriff Chris Quire announced Thursday. Farmer deleted his Facebook page last week.

Two days after a widely publicized letter from all five Franklin County public defenders critical of Farmer’s attendance at the Trump rally as well his police conduct, Quire reassigned Farmer to "non-law enforcement" administrative duties, but emphasized that he supported Farmer’s right to attend the protest given to him by the First Amendment.

A photo posted on Facebook by one of Farmer’s friends shows the detective wearing a sweatshirt that reads “I am the militia” on the day of the rally. The sweatshirt does not appear to be associated with any specific militia, and is distributed by pro-gun company Colion Noir under the brand “Pew-Pew Life.”

“Anti-Gunners love to say that the Second Amendment only applies to the militia,” an online ad for the sweatshirt reads. “Ironically, they don’t realize that we are the militia, and now you have the perfect hoodie to remind them.”

Farmer’s exact location at the time of the rally is also unclear. Photos only show him at a subway stop and at the Washington Monument, where Trump spoke to a rally before a mob overtook the U.S. Capitol, halting lawmakers’ certification of Electoral College.

Per one of Farmer’s Facebook posts about the event, screenshots of which The State Journal obtained, he says that he made it to the “base of the steps.” It is unclear which steps he referred to. If he meant the main steps at the East or west entrances to the Capitol, that would place him inside the initial fence barrier that Capitol Police set up to keep protesters out of the building, according to a timeline of events published by the New York Times.

LEX18 reported that Farmer told the station he left the event when the violence broke out, before reaching the Capitol steps.

In both the LEX18 interview while riding back to Kentucky from D.C. and comments the day after, Farmer has consistently expressed disapproval of those who breached the Capitol, saying they “deserve to go to jail for what they did.”

In the interview he also referenced largely discredited claims about “voting discrepancies” in the 2020 general election, and said that he attended the rally as a “send-off party” for the president. He told LEX18 that he didn’t expect it to change the results of the election.

“I do not condone what they did and I feel sorry for them for being idiots and thinking that would help a ‘revolution,’” Farmer wrote. “But I sincerely, and I stress this sincerely, have a hard time believing those people were truly there to support Trump… I’m disappointed that it occurred and skeptical of who they really were.”

At the time of his post, Farmer also estimated that there were around 20 to 30 people storming the capital.

Michael Sherwin, the acting U.S. attorney for the District of Columbia, said on Tuesday that investigators had identified at least 170 people who they believe committed crimes on the Capitol grounds.

According to the Department of Justice, as of Thursday 42 people had been charged in federal court related to violence at the Capitol Building.

In the absence of criminality, it's fair to support his right to free expression and assembly. However, expression of that right does not necessarily reconcile with the values our law enforcement needs to uphold. Surely someone going to a "Cops For Racism" rally- also expressing their rights- would be automatically removed from their responsibilities. Reassignment to a non-public-facing position falls well-short of the zero-tolerance position needed to restore and maintain the public trust.

This Farmer fellow's statements re the Jan. 6 riot at the capitol insists there were only 20-30 people who stormed into the capitol. I CALL B.S.! I watched hundreds crashing in and hurting other people, trashing the place, disrespecting the very seat of our government. AND OUR DEPUTY SHERIFF WAS RIGHT THERE WITH THEM!

I know that Farmer 'had the right' to be there, but I keep coming back to how his 'being there' reflects or influences his job.

Trump had loudly expressed the notion of "Stop The Steal" and had publically called for his 'followers' to come to Washington that day to.... change history? "And it wasn't any SURPRISE to him what they were there for. Trump had tweeted out on Jan 2 asking "participants to demand that Congress overturn the election results in swing states..." IN DIRECT OPPOSITION TO THE CONSTITUTION.

There are plenty of ways for someone to express a hearty 'Good Bye' to a president leaving office. There are also ways to be his ill-fated, ill-advised, and ill-intentioned mobsters showing up to intimidate the elected Members of Congress who were assembled to do their Constitutional duty.

Many of Farmers comments, actions, choice of apparel, and sketchy history of allegations of improper conduct while performing his sworn duty cause me to repeatedly question Farmer's fitness for a position of trust with the "color of law" as his personal shield.

In my view it is hard to be both a sworn law enforcement officer who promised to uphold the law at all times AND a vigilante 'militia' intent on subverting those actual laws.

PICK A LANE! Except a 'deeply held belief' or a 'personal ideology' that intimidation is the proper method to obtain what they could not at the Ballot Box is kind of hard to ditch for a life of service to established law and order that all sworn officers promised.

Bottom line? Sadly, the Constitution gives you the "right" to do many things. The Constitution never said that those 'rights' mean you can DEMAND employment in an entity that has the duty to always demonstrate 100% fidelity to the RULE OF LAW.

Like JimDan says “ you can’t serve two masters!” ( that’s what the CINO’s were attempting to do when they voted in Trump)

How about Farmer’s admission/brag that he made it to the steps. Just being on these steps during a riot is a crime. Of course Farmer is Cray fishing back out of that statement nowadays, but you can’t unsay it or unsee it.

In this investigation, it is essential to take a good long look at Farmer’s social media communications. Even Farmer should be able to understand the importance of that, if that’s how they hung all those involved in the happy pappy case that he was intimately involved with. That’s how we knew that Frankfort police chief Abrams had 63 communications with the Curtsinger guy. That is how they tied FPD DARE rep, Mike Wells and KSP DOT Steve Oliver into this crime syndicate.

Farmer’s phone needs to be “broke” to retrieve all of his deleted messages and the days preceding and the day of the riot. And it’s only appropriate that Farmer finish this off with his own words and deeds. He’s done such a crack up job already.

Great reporting. I am sure that the FBI will be appreciative when the State Journal submits it to the tip line.

Either Detective Farmer is a commissioned officer in our Sheriff’s Office, sworn to protect us and the Constitutions of the USA and Kentucky, or he is associating himself with a lawless militia of thousands of people who stormed our nation’s Capital in an insurrection. He cannot be both.

You cannot serve two masters as a police officer, either you are for us or against us. Cops are never really off duty.