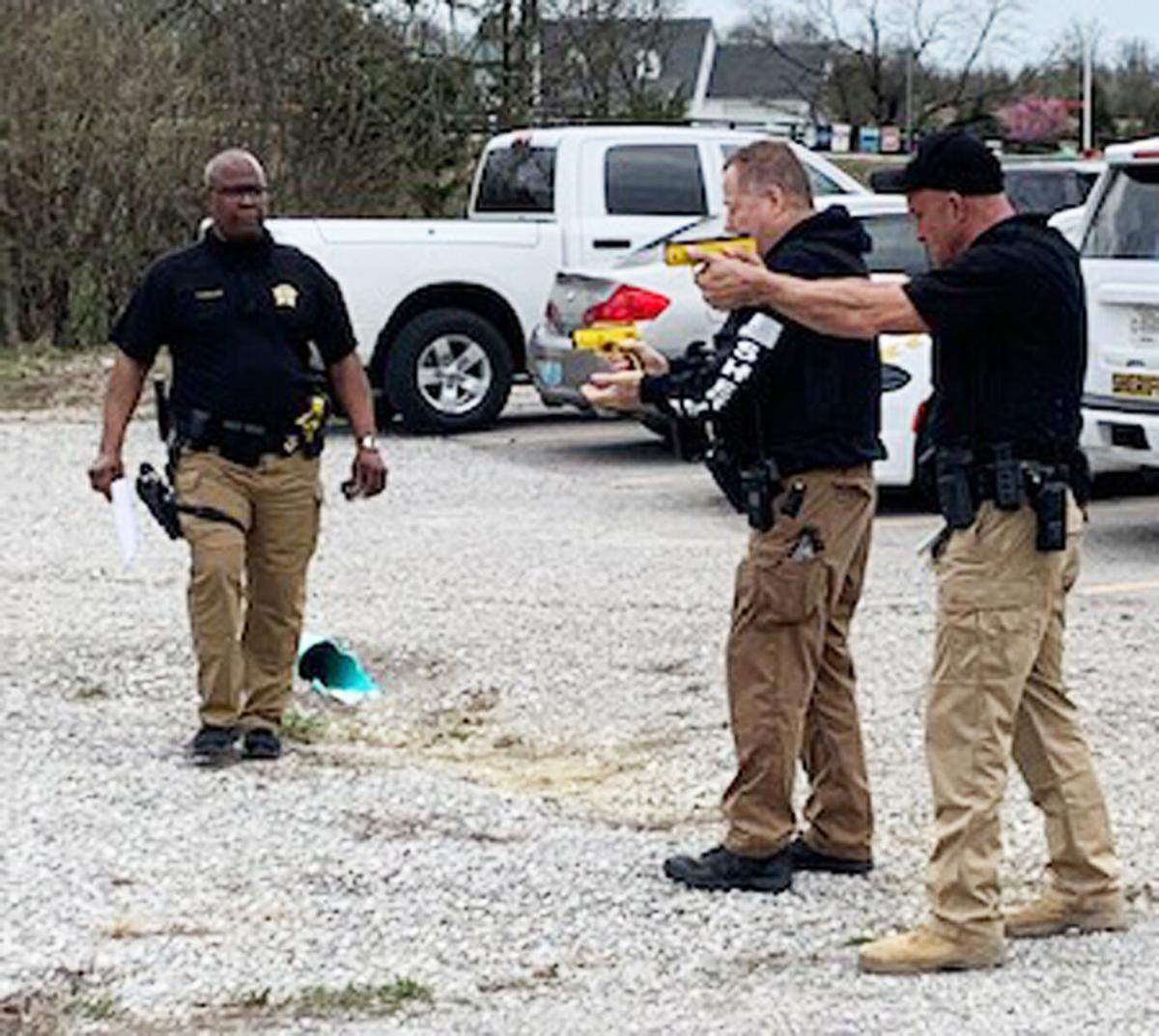 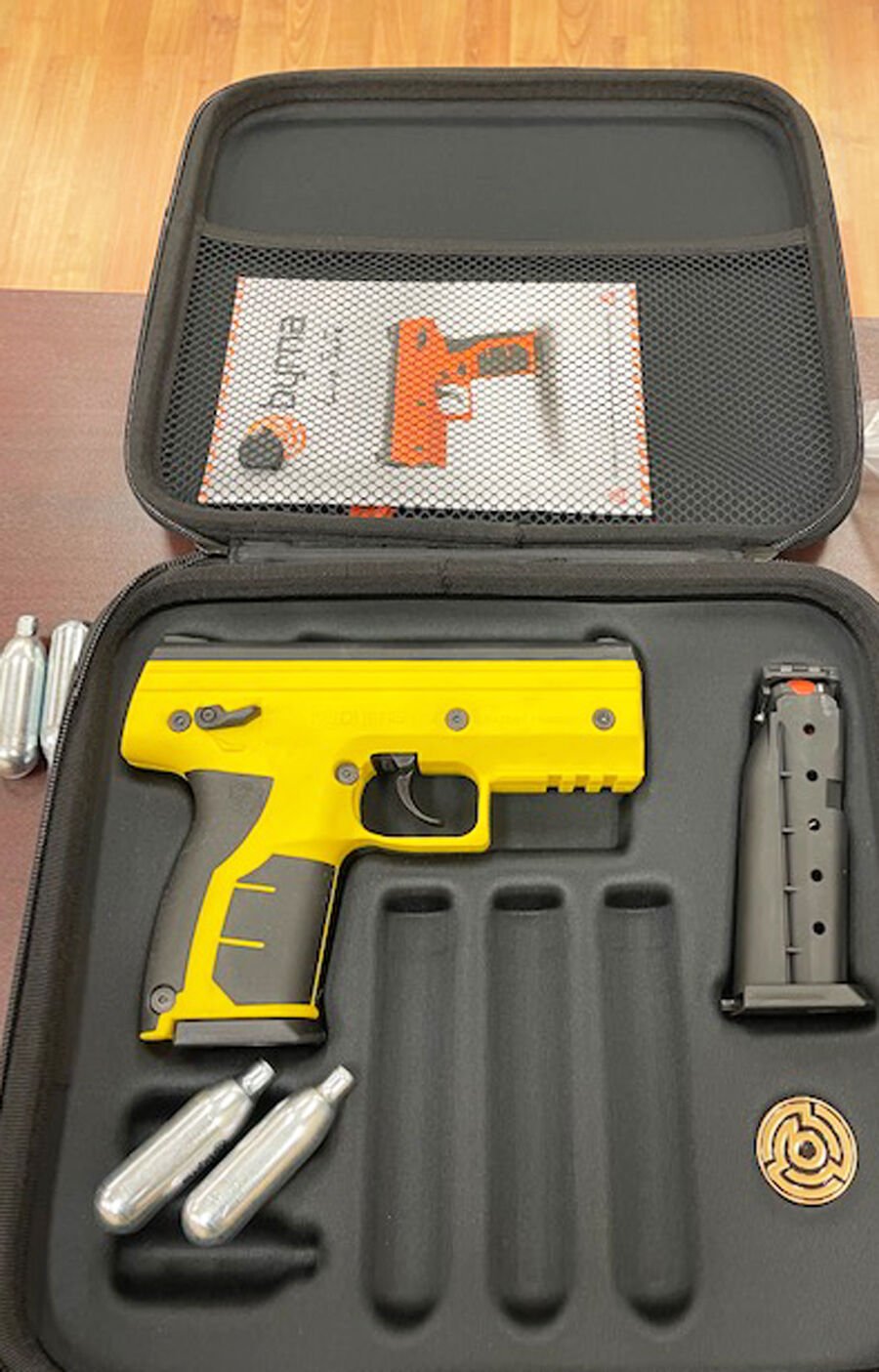 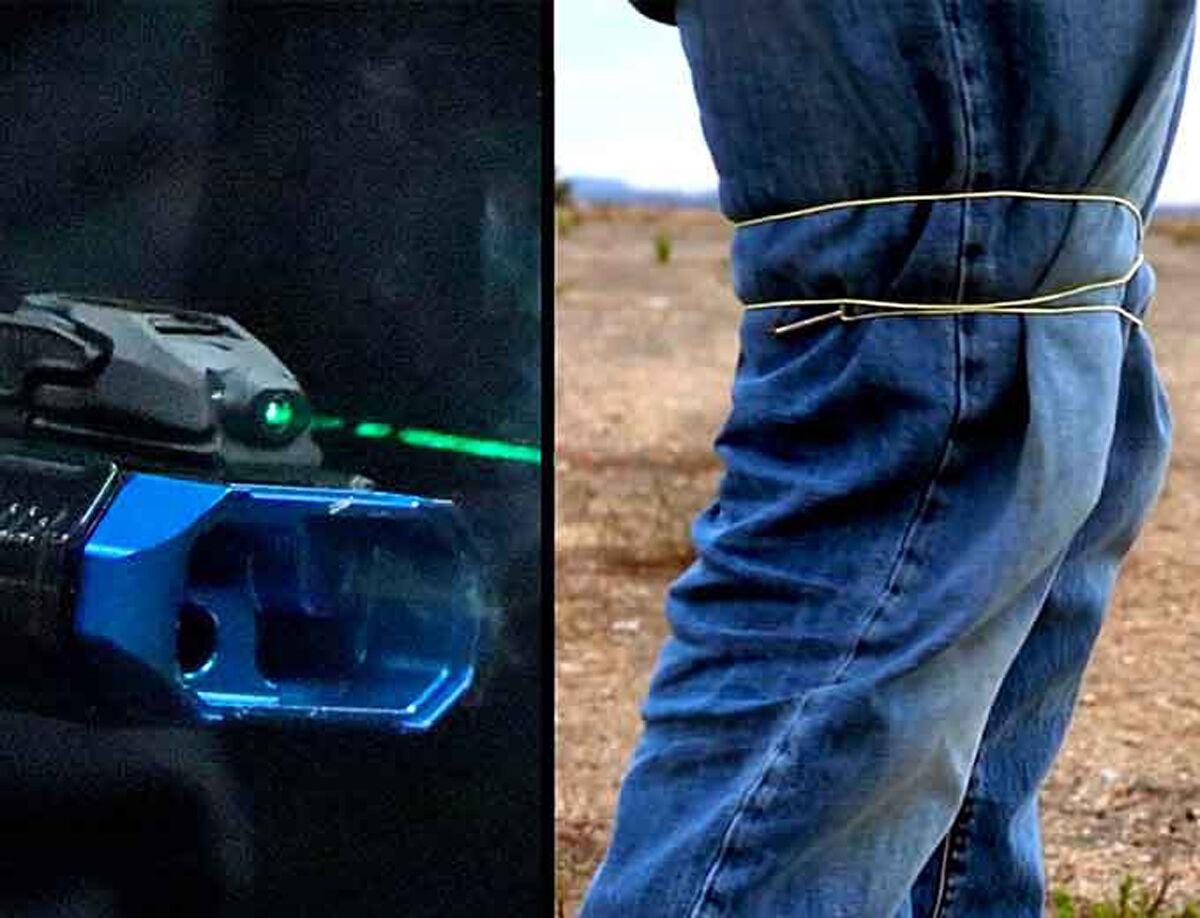 BolaWraps are devices that discharge Kevlar wires outfitted with hooks that wrap around a person’s legs similar to a lasso to effectively render them immobile. (Photo courtesy of Wrap Technologies) 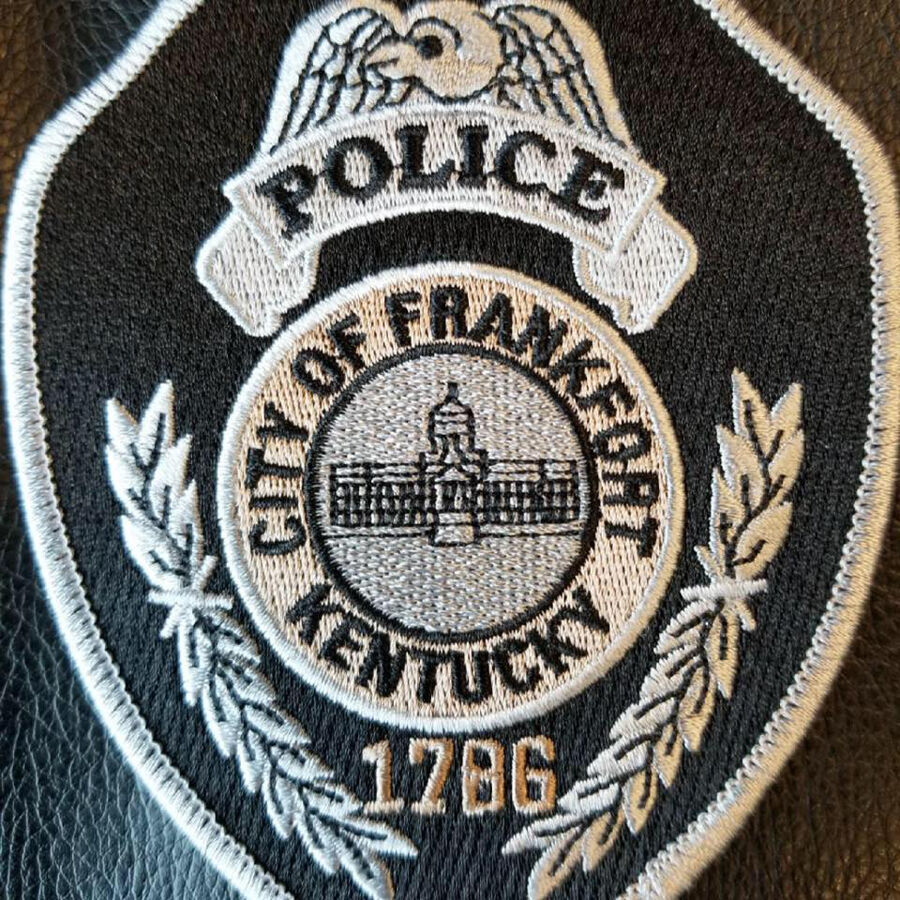 On the evening of May 2, 2020, two officers had to make a split-second decision: whether or not to use lethal force.

An armed and intoxicated man, who had already fired a gunshot inside an Indian Hills residence, was acting aggressively and not complying with repeated commands from Frankfort Police to drop his weapon outside a Hiawatha Trail home.

Officers Carlos Carcamo, then a 12-year veteran on the force, fired one shot and Josh McConnell, who had been with FPD for six years, fired four shots. All five were shot from rifles, according to police records.

The suspect, Edward Dean, 37, was injured after being stuck in the chest and torso and transported to Frankfort Regional Medical Center. He would spend the next seven weeks recovering.

Following his release from the hospital in June, Dean was indicted and charged with first-degree wanton endangerment, a Class D felony, and menacing, a Class B misdemeanor. He pleaded not guilty at his arraignment and is due back in court for pretrial motions on April 9.

After the shooting, Carcamo and McConnell were off duty for one week and reassigned to administrative duties for another week.

It is the only incident since 2018 when FPD officers have used lethal force.

“Outside of putting an injured animal down, our officers have been involved in one officer-involved shooting in the past three years,” said FPD Assistant Chief Lynn Aubrey.

According to department policy, the use of deadly force is allowed when “the officer is faced with an imminent threat of serious bodily harm or death to him/herself, or some other person who is present.”

The Franklin County Sheriff’s Office hasn’t had an officer-involved shooting in the past three years.

However, both local law enforcement agencies have added another less-lethal weapon to their holsters. Deputies and a select number of FPD officers are now carrying pepperball pistols to help diffuse certain situations.

The new devices are powered by compressed air and designed to shoot .68-caliber round pepperballs, which are small plastic capsules — roughly the size of a paintball round — that release Oleoresin Capsicum (OC, or pepper) spray on contact and has the same effect as getting pepper sprayed at close range — irritation to the eyes and sinuses.

“There are no non-lethal weapons. Any weapon could be considered lethal in certain circumstances,” explained Aubrey. “That is why they are categorized as less lethal.”

Both she and Sheriff Chris Quire told The State Journal that the pepperball pistols will not replace Taser guns, which both agencies still carry.

“These are another option of less-lethal weapons and can travel up to 60 feet — farther than a Taser,” Quire said. “Additional options to lethal force are priority.”

Not only are less-lethal choices more safe for all involved, but there is a better probability for a positive outcome, Aubrey added.

“Less-lethal options are utilized when the actions of the other individual are not deemed to be deadly force,” she said.

“There have also been times when deadly force would have been justified but our officers were able to utilize less-lethal to bring the situation under control.”

The sheriff’s office recently spent roughly $12,000 to outfit all full-time and school resource deputies with Byrna pepperball pistols. They were trained last week on how to use the weapons, which carry five rounds.

Some FPD officers are certified to carry beanbag rounds and pepperball rounds, Audrey explained, but it is usually only one person per shift.

According to Quire, there are several situations when pepperballs would be preferred to lethal force — such as when dealing with a combative or mentally ill person, attempting to disarm a suspect with a knife or bat, dispersing crowds and “anytime a person is non-compliant and force is necessary to affect an arrest.”

Frankfort police officers are equipped with a handgun, a Taser, pepper spray and a baton.

Audrey said FPD is researching another less-lethal weapon to add to the department’s repertoire.

“We have looked at some new technology called BolaWraps that we are considering. I do not have the cost to outfit the entire agency for those yet,” she said.

BolaWraps are devices that discharge Kevlar wires outfitted with hooks that wrap around a person’s legs similar to a lasso to effectively render them immobile. They are used by law enforcement to detain those who are not complying with commands — especially someone experiencing a mental health crisis or those under the influence of alcohol or drugs.

According to the company that makes them, BolaWraps fill the gap for an officer deciding whether to approach someone or potentially use a lethal weapon.

“We want the community to know we are always looking for ways to improve the office and modernize the way we operate,” Quire added. “We want a sheriff’s office we can all be proud of.”