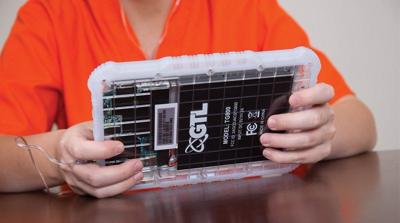 At one point, the only tablets allowed in jail would have been to cure a headache.

But recently, the introduction of computer tablets into incarcerated life has become more accepted across the country. And Franklin County Regional Jail is one of the most recent participants.

FCRJ launched a program at the beginning of May allowing inmate access to GTL Inspire tablets.The initiative is touted as helping better connect inmates and their loved ones on the outside while improving conditions for all inside the jail. Now most areas — excluding segregation units — have access to a tablet for a variety of purposes.

The tablets came at no cost to the jail, officials said. GTL charges inmates for use of some services and reimburses the jail's commissary for administrators allowing them into the jail, effectively generating revenue for FCRJ.

Ron Wyatt, spokesman for FCRJ, said the shift toward the technology is long overdue but becoming widespread.

"It helps us comply with regulations," he said. "Many jails have them and many more will. To me, it's bringing the corrections world into the 21st century like the rest of us."

Wyatt said the tablets' video visitation functionality also acts as a security measure. Physical visits are a major undertaking, he said, because jail staff have to gather inmates from their housing units, facilitate their movement to visitation areas and monitor their visitation. But with video visitation, all those are absent, which decreases the potential for contraband entry and passage within the jail.

"They can still have face-to-face conversations with loved ones while reducing the number of visitors," Wyatt said. "The inmates love it. It gives them more contact."

Much like other tablets, the GTL inmate tablets allow access to books, movies, music, messaging and video calls. FCRJ allows each inmate 30 minutes of tablet time per week. GTL charges the inmates a fee of 21 cents per minute for video visitation; other paid content varies from 2 cents to 5 cents per minute, jail staff said.

GTL, which serves about 2,300 facilities across the country, has faced criticism for fees that some inmate advocates contend are excessive and, in some cases, even rise to the level of gouging. However, the tablets also provide access to free services such as grievance forms, information queries, the law library and news articles.

"As a company, our focus is on partnering with facilities to implement the solutions that work best for them," wrote Matt Caesar, GTL executive vice president. "At Franklin County, we will be providing online GTL education courses and GED prep classes via the tablets, but they will be administered by Thorn Hill Learning Center... We believe that (FCRJ) will see major benefits following the implementation of their Inspire tablet program."

Wyatt said the tablets — which can be monitored and withheld when issues arise — are less of a luxury and more of a tool in the arsenal of jail staff.

"Jail is not supposed to be pleasant, and it's not," Wyatt said. "Tablets reduce the stress among the inmates, and it makes for a great behavior modification tool."

Parade at Dominion gives residents a chance to visit with families