Attorneys representing all five Franklin County public defenders filed the final response in an ongoing back-and-forth over whether a judge should dismiss a defamation lawsuit by Franklin County Sheriff’s Deputy Jeff Farmer.

Now Judge Karen Caldwell of the U.S. Eastern District of Kentucky will decide whether to grant or deny the defenders’ motion to dismiss the suit, which seeks more than $1 million in damages.

The defamation claim stems from a widely distributed letter the public defenders penned critical of Farmer’s attendance at the Jan. 6 pro-Trump rally that preceded a mob siege of the U.S. Capitol.

In the most recent filing, defenders’ counsel reasserts previous claims about alleged shortcomings in Farmer’s suit.

The response claims that Farmer’s counsel, led by Northern Kentucky attorney Chris Wiest, exaggerated what the public defenders wrote in their initial letter.

Wiest said that the defenders’ letter included the “worst kind of lies” against Farmer.

The public defenders, through their attorney, say that none of the defenders’ claims are provably false. They also say that Farmer’s claim of “retaliation” against him is based not on the letter but on actions that were taken by others.

It adds that one test for Farmer’s defamation claim is whether the contents of the letter constituted an “adverse action” against him that would “deter a law enforcement officer of ordinary firmness” from political participation. Citing the fact that Farmer initiated political engagement with the public via social media and an interview with LEX18, the response indicated that he, along with other law enforcement and public officials officials, ought to have "thicker skin" when choosing to engage in political matters.

“Farmer attempts to obfuscate this test by focusing not on the actions of Defendants (writing and publishing a letter) but on actions that were taken by people other than the Defendants (e.g., temporary reassignment by the Sheriff and purported harassment of Farmer’s children at school),” the response reads. “The alleged ‘adverse action’ by the Defendants is writing a letter about Farmer. Farmer does not allege that Defendants reassigned him at work or harassed his children.”

The response goes through each of the claims that Farmer called defamatory and makes a case that those claims “raised concerns,” but did not state anything provably false.

Notably, the defenders also submit an exhibit partially backing up a claim previously made about how Farmer “often charges all individuals in a vehicle.”

It quotes a case in which Farmer charged all three people in a car found with a small amount of marijuana in the console.

The defenders’ filing was the final argument submitted before Caldwell decides whether to dismiss the suit.

If Caldwell grants the public defenders’ motion to dismiss, Wiest said that he will appeal to the U.S. Court of Appeals for the Sixth Circuit.

If Caldwell denies the public defenders’ motion to dismiss Farmer’s suit, Wiest said the case would move to discovery and that there would likely be a jury trial. 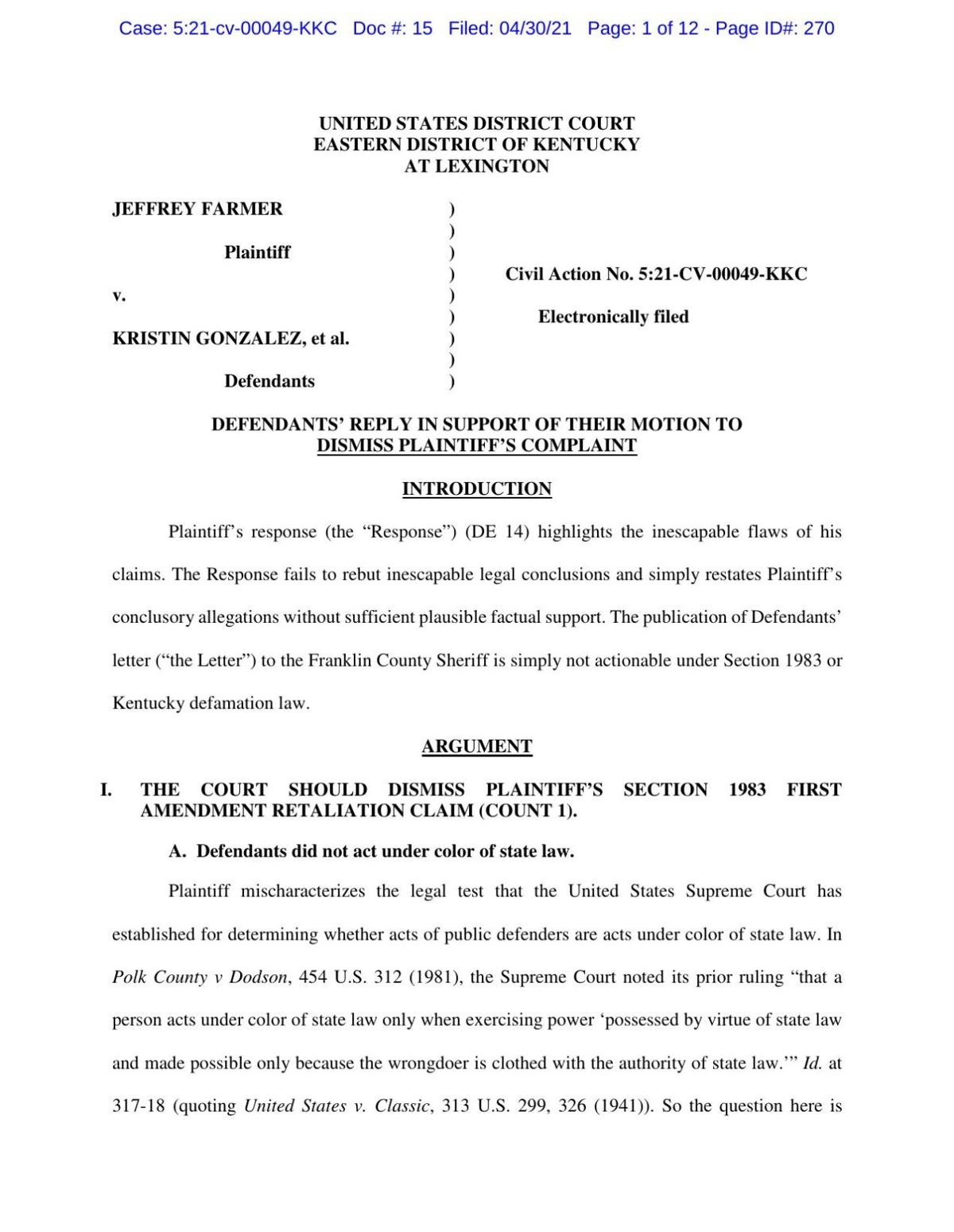 Last thing that Farmer wants is to be on the witness stand in a jury trial explaining what he was doing for that six hours of the insurrection at the base of the Capitol steps! Playing frisbee with the other tourists?