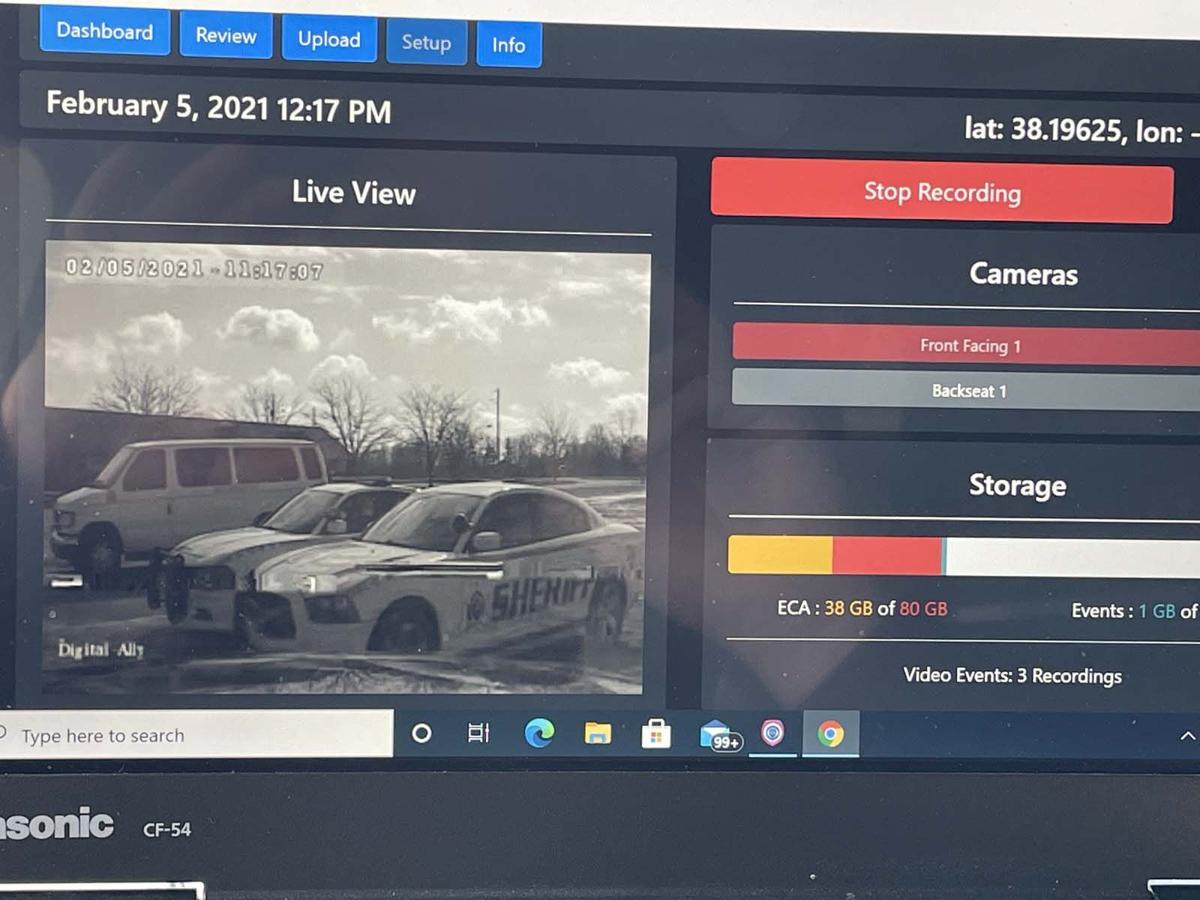 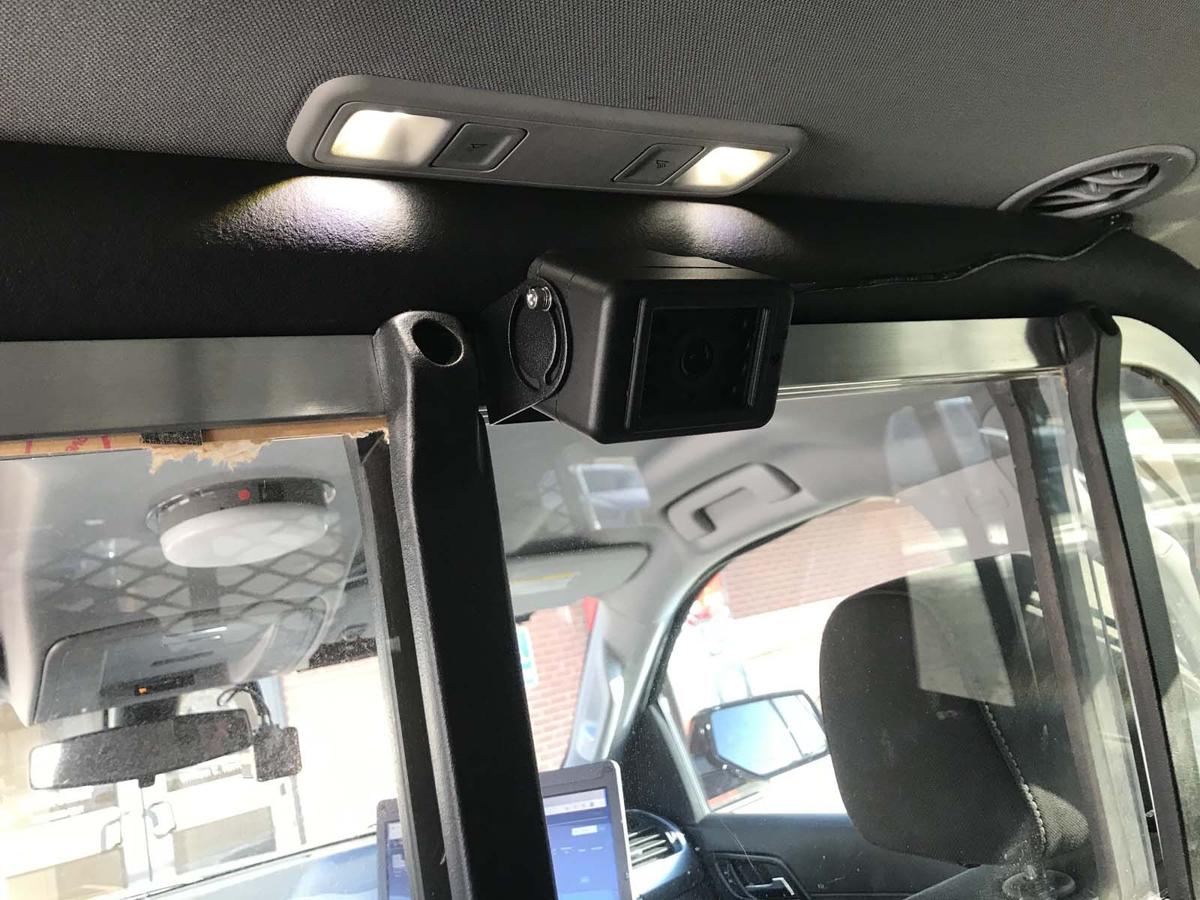 The new camera system in the deputies' cruisers includes one facing the back seat where prisoners are placed. (Photo courtesy Franklin County Sheriff's Office) 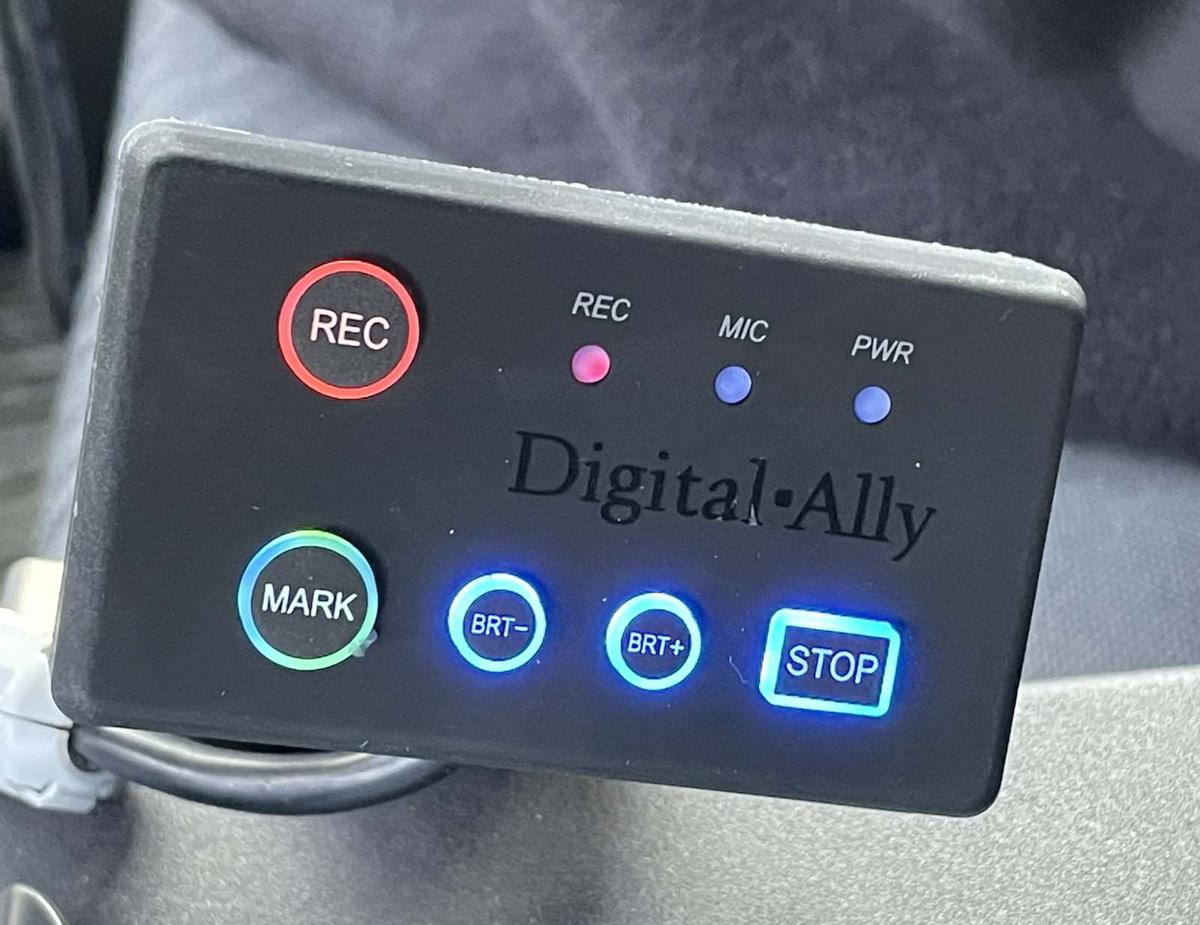 The controls for the cameras allow the deputy to manually activate and control them, but the cameras are also automatically activated when the cruiser's emergency lights are turned on. The vehicle cameras also sync with the deputies' body cameras. (Photo courtesy Franklin County Sheriff's Office.)

Deputies on patrol in Franklin County now have another set of eyes on them after new camera systems were installed in their cruisers this week.

Franklin County Sheriff Chris Quire said the cameras are compatible with the body cams deputies already wear, and add another level of transparency.

“We’re thankful the Franklin County Fiscal Court allowed us to build this into our budget to pay $30,000 a year for five years,” Quire said. “We’ve already made two payments, so we’re ahead for next year.”

Quire said the cameras will cover the front and rear of the vehicle, as well as one mounted on the cage between a suspect and the deputy.

“It really is foolproof,” he said. “If you turn your (emergency) lights on, the cameras come on.”

They can also be activated manually, he said.

It would allow for telehealth assessments with Eastern State Hospital, he said, to determine whether a person would need to be admitted as well, he said.

“To me, body cams are more important if you have to pick,” he said. “These capture all the driving. (Dash cams) are a very close second.”

Quire said the systems were installed by Wednesday and the sergeants were trained on the cameras Thursday. The patrol deputies will be trained in the next few shifts, he said.

The system also offers enclosed GPS tracking, which Quire said would be helpful when deputies are in rural parts of Franklin County, or if something should happen, whether during a call or if they are involved in an accident.

“The deputies are glad because it gives them a sense of safety and security,” Quire said. “The commonwealth's attorney and the county attorney both spoke highly of us getting them for court purposes. I feel it’s a necessary tool.”

Quire said the cameras can be installed in other cruisers as older vehicles are taken out of service. He wants to purchase sport-utility vehicles for deputies in the future, as they are better suited for the rural parts of the county.

“Some of the cars aren’t worth what the cameras cost,” he said.

The contract also carries a warranty, storage and data plan for five years.

Ron , as I grovel so shall ye! Do Ye grovel at the feet of Trump in your seething hatred to those that approach your master? ! Double, double , Ron ,toil and trouble ! I luv ya man!

Maybe we should require all law-enforcement officers to wear a body cam when they attend a Trump “rally”… Just to be sure. That way they’ll be no question about what they did and what they didn’t do at the “rally”! No only thing is what do we do if they turn it off, like many police officers have done and they get ready to kill some innocent unarmed black man in an alley somewhere?

Jim, you, and most Leftists, are absolutely consumed and seethe with Trump hate. And he's not even President anymore! And you have obvious animosity for law enforcement because many of them supported him over his 4 yrs. Hey Jim, what about that left wing lunatic that tried to kill all the GOP reps at that congressional baseball game when he shot Rep Scalise and the 2 black law officers?

As far as the Sheriff cameras go, it was a very wise investment.

It was a very wise investment that SheifPat Melton

It was a very wise investment that Sheriff Melton should have implemented back when they were first considering it. Technology has always been there for the last 10 years.

Law-enforcement officers are never off duty, even when they take leave time to go to a Trump riot and storm the capital killing good police officers. There were 140 capital police/DC officers who were injured by the way mob January 6, many seriously injured. They were upholding their oath, while the off-duty MAGA police officers were violating their’s, so much for lives matter, huh? I have animosity for dirty cops, those who take advantage of the absolute power and authority that we have given them and push a violent right wing agenda. Please officers are supposed to be peace keepers, not occupying forces. I revere those police officers who are protecting our capital from these violent invaders, including those who room please officers they are two calls murder and mayhem. The police are not a monolith, and they need to police their own, because if they don’t, they’re no better than what they have in Russia, a police state!

Jim, you don't like Sheriff Quire very much do you? The article clearly indicated the actual purchase and installation of the cameras was under Sheriff Quire. Moreover, you and the Left are using every opportunity to impugn and taint ALL law officers, again for some having dared to support Trump. And lately, even the National Guard has been impugned for the very same thing. Implications that they and the police are mostly white and therefore "supremacists" is nothing but racist and specious fertilizer! But, you, Richard and the Left will continue to try to impugn and taint them, won't you?

I respect, voted for and supported Sheriff Quire in his bid for his current job. I applaud him for finally installing these cameras in the their cars. It has been a long time coming. But they’re not there just to keep an eye on the officers, they are but a tool to help determine the facts of what actually went on when intervention occurs.

The cameras are but the cold, hard truth, free from political bias, and they sure could use some of that when evaluating what Detective Farmer did in Washington DC, when he answered Trump’s summons and joined the mob that attacked our Capital building.

The truth about what he really did there is in his phone, as his apps followed him everywhere he went and his now erased recents, texts and/or voicemail messages would shine sunlight on the truth.

The jury is still out on how Sheriff Quire handles this.