A sheriff's deputy said Franklin County Schools' superintendent pressured him to end an investigation of Bondurant Middle School's principal for allegedly failing to report complaints of sexual abuse by a teacher. The deputy's allegation led to the superintendent's indictment this week on a misdemeanor count of bribery.

The State Journal obtained details of the case through an open-records request.

County Attorney Rick Sparks on Thursday released a partially redacted report filed by Franklin County Sheriff’s Deputy Montey Chappell on June 19 after a conversaton with Kopp about the investigation of sexual abuse allegations and the principal's handling of them. 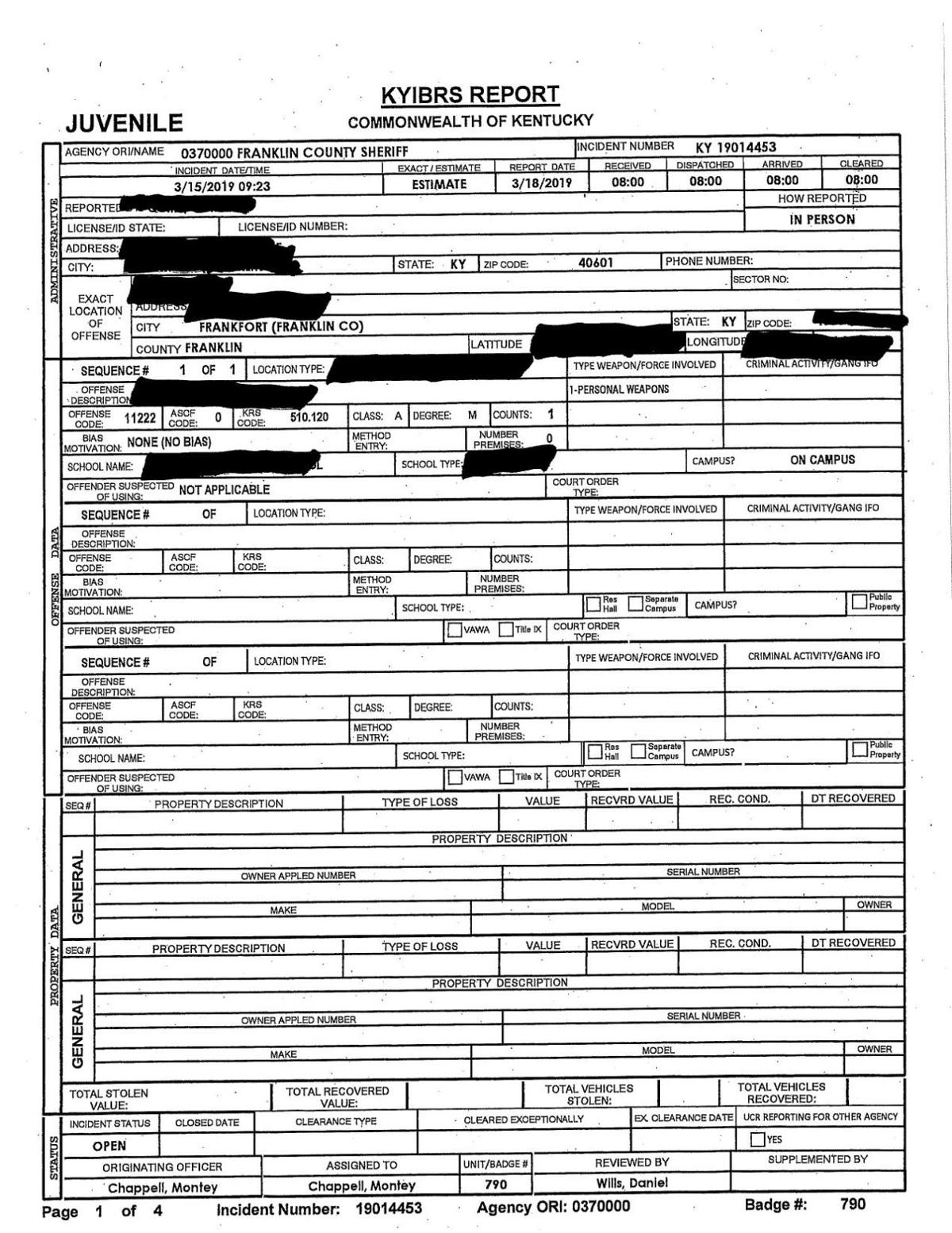 Smith, who taught seventh grade math and science at Bondurant last year, was indicted Tuesday on two charges of first-degree sexual abuse of minors under the age of 16, a Class D felony. The abuses allegedly occurred during the 2018-19 school year.

Kentucky law requires that child abuse or neglect must be reported, including by a person in any position of authority or special trust and anytime a person 21 years old or older commits or allows an act of sexual abuse, sexual exploitation or prostitution upon a child younger than 16.

Information in the report that identified the referral source, the alleged victim and the means and manner of alleged abuse were redacted, along with any information that could lead to the identification of the alleged victim, who is a minor. The State Journal does not identify victims or alleged victims of sexual assault or harassment unless they publicly identify themselves.

In his report, Chappell said that on March 15, he was notified to return a call to the Frankfort Police Department about a complaint that the department had taken the night before. After Chappell spoke with an FPD officer, he contacted Kopp and asked to meet.

Chappell said that Human Resources Director Holly Adkins responded to him and arrived at an unidentified school where they met Allison and told her about the investigation of Smith.

The deputy wrote that Allison said, “Yeah, I heard something about this and had started to look into it.” Kopp and Allison then started the process to have Smith “relieved of his duties” and to find a substitute teacher to take over his classes.

Chappell said that he stepped out of the office while Kopp, Allison and Adkins met with Smith, who reportedly left without incident.

Chappell said in the report that on June 19, he received a grand jury subpoena from Assistant Commonwealth's Attorney Zach Becker requesting documentation from the Franklin County Board of Education. Chappell said he gave the subpoena to Adkins, who allegedly told him, “I read the law and I don’t think she (Allison) broke the law. She has to look into it first to see if they broke the law. I just don’t see it.”

Then, Chappell said, he ran into Kopp coming up some stairs and Kopp asked about the Smith investigation.

“I told him that it was being processed for a grand jury hearing but there is going to be some collateral damage,” Chappell wrote.

Kopp then asked Chappell to come into his office, the deputy alleges. Chappell told Kopp he gave the subpoena to Adkins for policies and procedures as requested by the Commonwealth’s Attorney's Office on the question of alleged failure to report on Allison’s part.

“This is bulls---. Now we are going to lose a principal over this and I don’t believe the teacher did it! I think he might be weird or strange, but this is bulls---!” Kopp allegedly told the deputy, according to Chappell’s report. “I don’t know. I am just probably venting here but she is one of our best principals.”

Chappell said he told Kopp that he was similarly fond of Allison, “but you just can’t dismiss the fact,” to which Kopp allegedly said that he would “go to bat for her and do what it takes!”

The deputy wrote that he told the superintendent that he was not the bad guy and was just doing his job.

As the two stood up, Chappell alleged that Kopp picked up a folder and said, “This is the new SRO (School Resource Officer) contract and I am keeping it the same as last for this year.” Chappell believed this to refer to earlier conversations that he had with Kopp regarding Chappell’s concerns about Kopp rehiring former Frankfort Police Chief Jeff Abrams as FCS' supervisor of school resource officers.

Abrams was hired by the school district as its first school safety coordinator in June 2018. Abrams said Thursday that he is still serving in that position.

“I am doing you a solid. Now I need you to do me a solid,” Kopp allegedly said after picking up the folder, according to Chappell’s report. A "solid" is slang for a favor.

Chappell wrote that he took that to mean he should make the Allison situation "go away because I did you a favor for not hiring Jeff Abrams.”

Chappell wrote that he told Kopp before leaving the meeting, “You can’t find room in shades of gray. Don’t know what to tell you.”

Chappell was a school resource officer at the time but is now head of courthouse security, Sheriff Chris Quire said earlier this week. Chappell’s move to a new position was part of other reorganization in his office, Quire said.

The Franklin County Board of Education announced Wednesday that it would hold a special meeting on Friday. On Thursday, the agenda was amended to include “Action and/or Discussion Regarding the Superintendent Status.” The meeting will be at 11 a.m. at the board office on Kings Daughters Drive and will include a closed session.