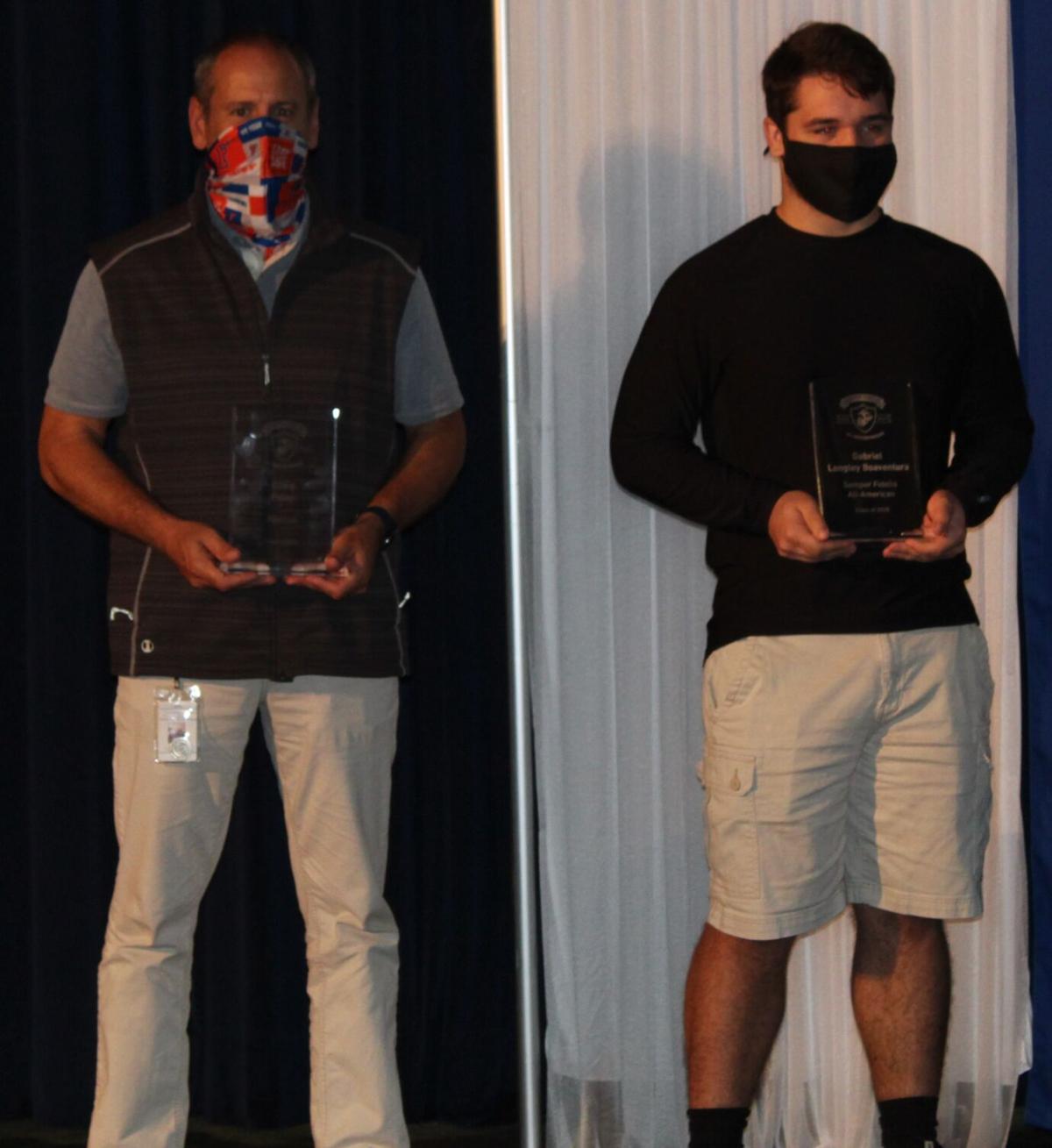 Frankfort's Gabriel Langley Boaventura, right, was honored as a Semper Fidelis All-American in football last week during a ceremony at FHS. At left is FHS football coach Craig Foley, who received an award as Langley Boaventura's mentor. (Photo submitted)

Frankfort's Gabriel Langley Boaventura, right, was honored as a Semper Fidelis All-American in football last week during a ceremony at FHS. At left is FHS football coach Craig Foley, who received an award as Langley Boaventura's mentor. (Photo submitted)

The Semper Fidelis All-American Program is a relatively new one, having debuted in 2017.

Presented by the Marine Corps, its website says the program “recognizes high school students who face life’s battles with the conviction and determination to succeed.

“These students embody the same fighting spirit that Marines stand for by taking on the challenges of succeeding academically while bettering their communities and excelling in athletics and extracurricular activities.”

Frankfort senior Gabriel Langley Boaventura found out this past summer he was named a Semper Fidelis national All-American in football, and last week he received his award during a presentation at FHS.

Over 1,500 athletes were nominated across the nation, and only 96 received the award.

For this honor, Langley Boaventura has been selected as the Traditional Bank Athlete of the Week.

He was nominated for the Semper Fidelis award by FHS football coach Craig Foley and FHS counselor Jenny Richardson. To be nominated, a student must be a junior in high school, have a 3.5 or higher GPA on a 4.0 scale, be active in community service, play a competitive team sport and hold a student or community leadership position.

Langley Boaventura, a senior guard and defensive tackle, is the son of Maia Langley and the late Rui Boaventura and the stepson of Peter Wilson.

SJ: How much emphasis do you place on academics?

Langley Boaventura: Academics are No. 1. I’m going to graduate with an associate’s degree along with my diploma. A few days ago I had a big speech coming up, and I realized I hadn’t prepared for it as much as I should and I wasn’t going to get the grade I expected of myself. I asked Coach Foley to relieve me from practice that day so I could spend more time on my speech, and I got a better grade. I’m a Governor’s Scholar, and academics are No. 1 and No. 2 on my list. I’m always excited to learn something new, something challenging.

SJ: How has COVID changed your perception of football?

Langley Boaventura: Since COVID I really value the program in a way I hadn’t done before. Every opportunity to step on the field, to put on my helmet, is a privilege. Every practice is a treat, for wearing our masks and following protocol. It’s made me appreciate all the time that’s gone into it, and I’m so grateful to be able to do it.

SJ: What other sports do you play, and what is your favorite?

Langley Boaventura: I swim and I’m a track and field captain. I started track and field my junior year, and while it’s near and dear to my heart, I haven’t had a lot of time to build that appreciation. I’ve been swimming since the sixth grade, and I started playing football my freshman year. It’s between swimming and football.

SJ: You had to select a mentor as part of the Semper Fiedelis program. Why did you pick Coach Foley?

Langley Boaventura: He has been there for me since my freshman year. He’s helped me, and he got me playing football. He’s been a rock for me in high school. He’s one of the most reliable people I know, and he’s there when I need a recommendation, support or advice.

SJ: What are your plans after graduation?

Langley Boaventura: I want to go to the University of Kentucky. I want to apply to the Lewis Honors College, and I want to major in business and international studies at the Patterson School of Diplomacy and International Commerce.