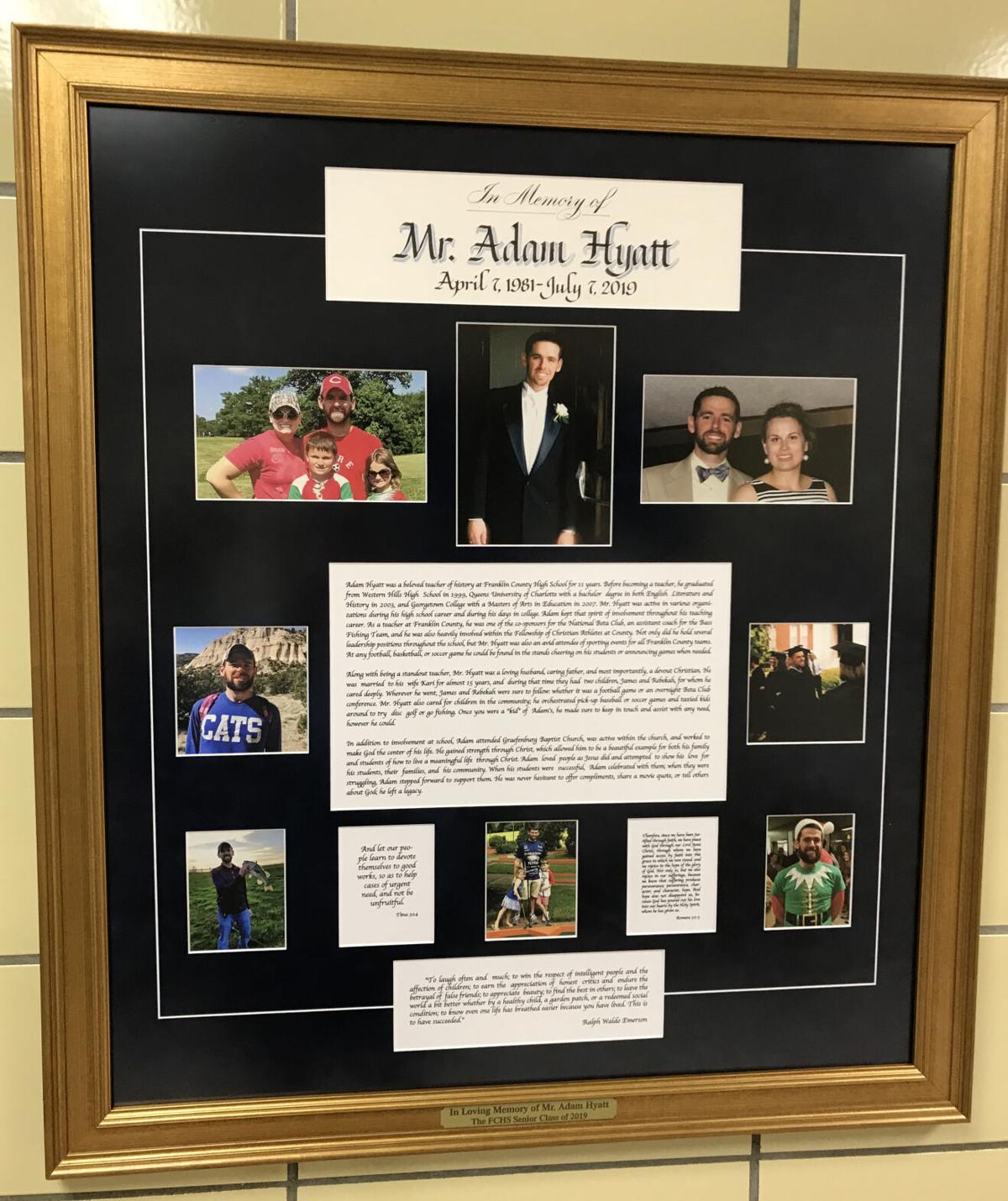 A memorial for Adam Hyatt, funded by the Franklin County HIgh School Class of 2019, was unveiled at the school Tuesday. Hyatt, who taught at FCHS for 11 years, died in a car accident July 7, 2019. (Linda Younkin/State Journal) 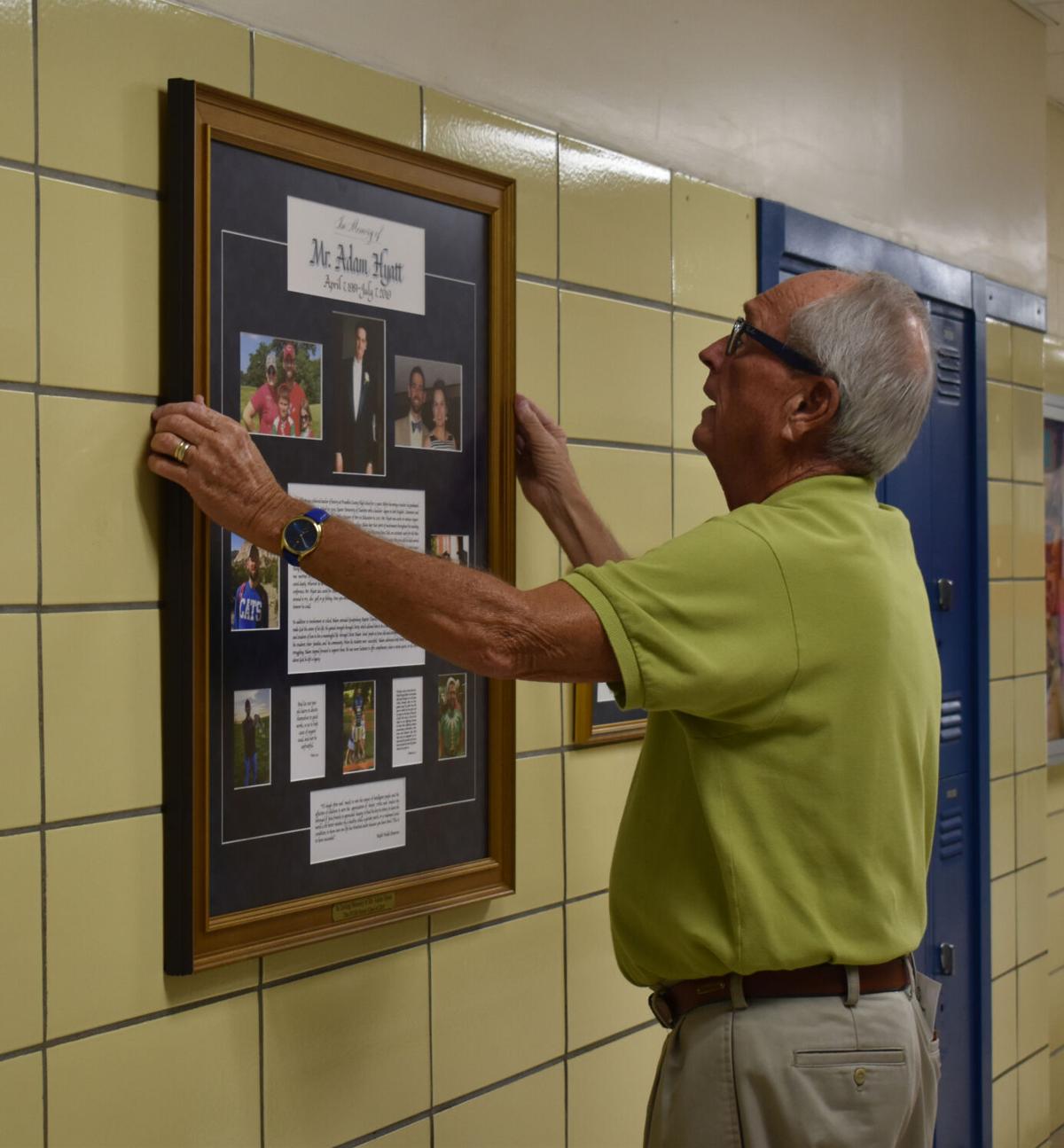 Terry Johnson straightens a memorial for Adam Hyatt after hanging it in a hall at Franklin County High School during a ceremony Thursday. (Linda Younkin/State Journal)

A memorial for Adam Hyatt, funded by the Franklin County HIgh School Class of 2019, was unveiled at the school Tuesday. Hyatt, who taught at FCHS for 11 years, died in a car accident July 7, 2019. (Linda Younkin/State Journal)

Terry Johnson straightens a memorial for Adam Hyatt after hanging it in a hall at Franklin County High School during a ceremony Thursday. (Linda Younkin/State Journal)

The Class of 2019 at Franklin County High School wanted to make sure everyone remembers that.

On Tuesday, a memorial for Hyatt that was funded by the Class of 2019 was unveiled at the school.

“The family are my neighbors, and I’ve known them all my life,” said Julia Blackburn, president of the 2019 class. “All the class officers had him for class at some point during their time at Franklin County.”

The memorial includes pictures of Hyatt, including some with his family, a biography, two Bible verses and a quote from Ralph Waldo Emerson, and it’s framed and hanging in a hall near the front office.

“The class officers and I wanted to do something, a physical memorial,” senior class sponsor Terry Johnson said, “so even people who weren’t in school would know the impact he had.”

While the 2019 class had already graduated, it wanted to fund the memorial. The officers, besides Blackburn, were Caitlyn Barnes, Tre Taylor, Tommy Pack, Sydney Mefford, Erica Enriques, Haley Marrow and Allen Slaughter.

“It was leftover money we raised for prom,” Blackburn said. “We always give the money we have left over to the school in some way. With Mr. Hyatt’s untimely death, we came up with this. We knew we didn’t want to do anything else with the money.

“It turned out very well,” she said of the memorial. “It was everything we wanted it to be. We wanted it to be who he was. It shows the person he was inside and outside of school.”

Johnson said one of the goals of the memorial was to show the different sides of Hyatt.

“We wanted to remember him as a Christian, No. 1, as a family man, No. 2, and as a great teacher, No. 3,” he said. “We included a couple of his favorite Bible verses and pictures as a family man. There’s a quote here, and it’s about using yourself to be fruitful for others.”

Johnson said there was something else people could do to honor Hyatt.

“Last year when we met at the flagpole, we were all there, and we talked about what we wanted to do for Mr. Hyatt,” Johnson said to the class officers at the ceremony.

“We came up with several things, and they were very good, but they were wordly things.

Kari Hyatt thanked the class officers for the memorial.

“I really like this for the fact that people will walk by and see it,” she said. “Even if they weren’t here when he taught here, they’ll see his name and read it. It puts him where he loved to be.

“Thank you for keeping him here.”