Editor's note: This article was updated on Wednesday afternoon to include comments from the FBI.

The Franklin County Schools finance director who resigned last month had been suspended after the district learned she was under investigation by the FBI.

Superintendent Mark Kopp said that the FBI contacted the school district regarding an investigation involving Lesley Wade, who served as the district's finance director and school board treasurer. She was suspended with pay the same day she resigned, records show.

"On Tuesday, June 25, we were contacted by authorities who are investigating a matter related to that former employee," Kopp said.

He explained that due to the "sensitive nature" of the investigation and "on advice of legal counsel," he was unable to comment further.

Timothy Beam, Chief Division Counsel at the Louisville FBI Field office, said that in accordance with Department of Justice policy, "the FBI will neither confirm nor deny the existence of such an investigation."

Wade, who became the school district's finance director in 2017, resigned at the end of June while on suspension, according to her personnel file, which was obtained by The State Journal through an open records request.

Wade was suspended with pay beginning on June 26, according to documents in the file. The letter, which was from Kopp, said the suspension would last no longer than 10 working days and remain in effect pending an investigation. The letter gave no reason for the suspension.

According to FCS Board Policy, an employ can be suspended with pay "only when the Superintendent determines there is a justifiable need for an investigation of alleged employee actions necessary to protect the safety of students and staff or to prevent signification disruption of the workplace and/or education process."

Wade, who worked for the district for 19 years, resigned via an email to the human resources director on the evening of June 26, the same day her suspension began.

The email only contained one sentence: "Please consider this my resignation."

Kopp sent a letter to her the next day saying that the notice had been received and accepted.

Former Superintendent Chrissy Jones appointed Wade, then known as Lesley Cummins, as finance director for the school district in February 2017. Wade was re-employed for her position for a full year beginning in July 2017. 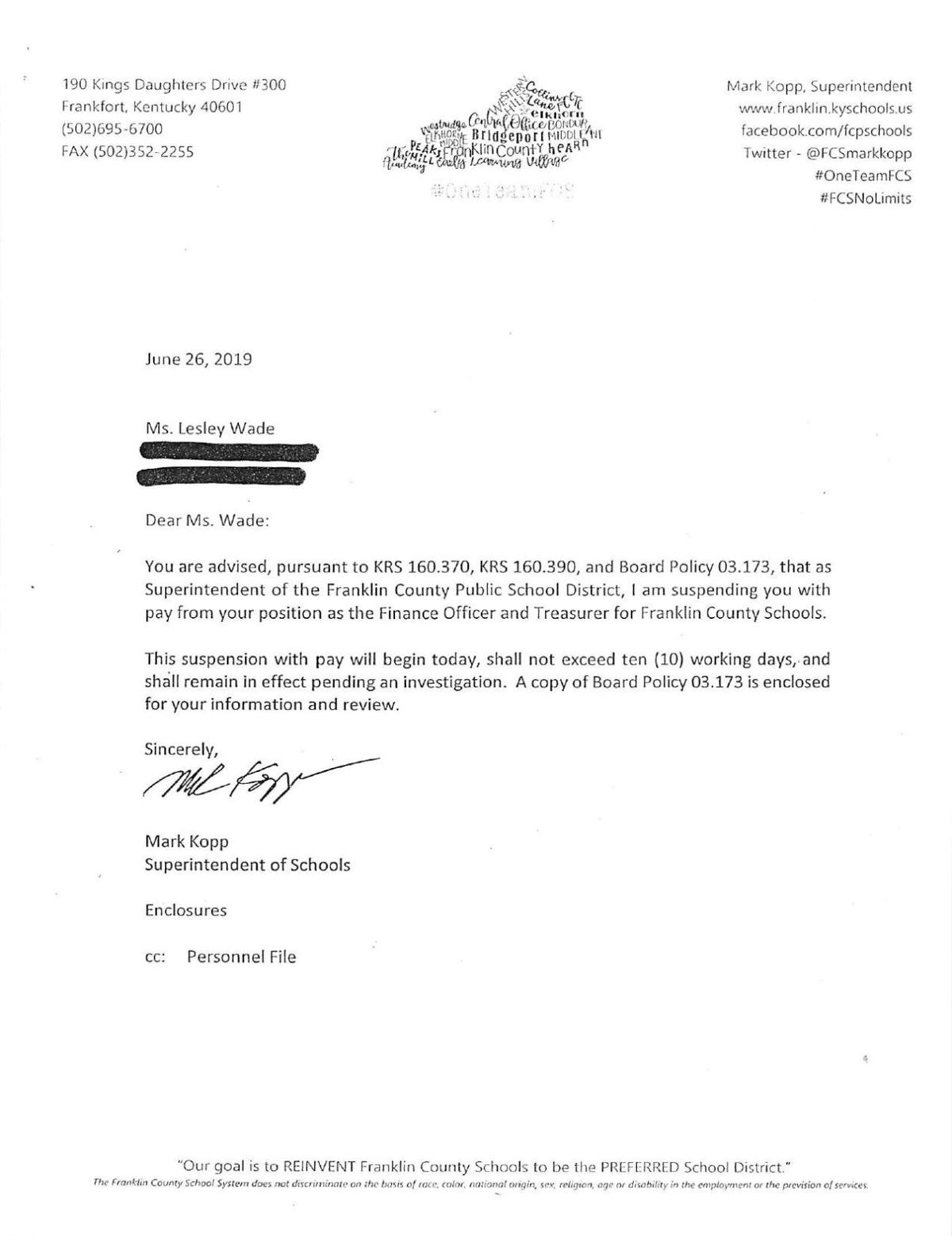 In addition to the documents from Wade's personnel file, The State Journal submitted an open records request for the school district's audits for the past decade.

In the fiscal year 2018 audit, which was done by RFH CPAs and Consultants of Lexington, auditors found that FCS did not "have the internal control procedures required to draft financial statements in conformity with generally accepted accounting principles" because the district lacked "personnel with the expertise to apply generally accepted accounting principles in preparing its financial statements." The audit also found that because the district began to take on "complex activity" related to funding construction of a school, debt issuance and implementing a new accounting standard, it led to "unadjusted financial statements being materially misstated."

RFH made similar observations in 2017. That company began doing independent audits of FCS in 2016.