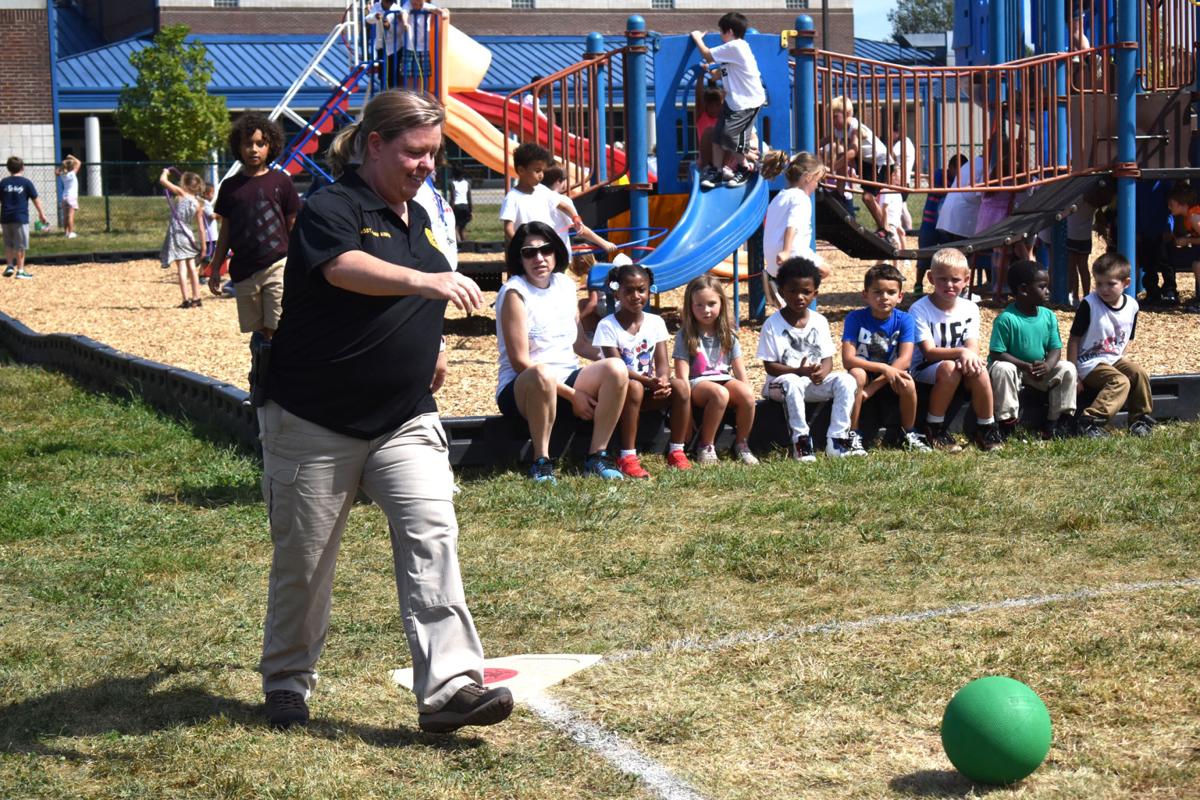 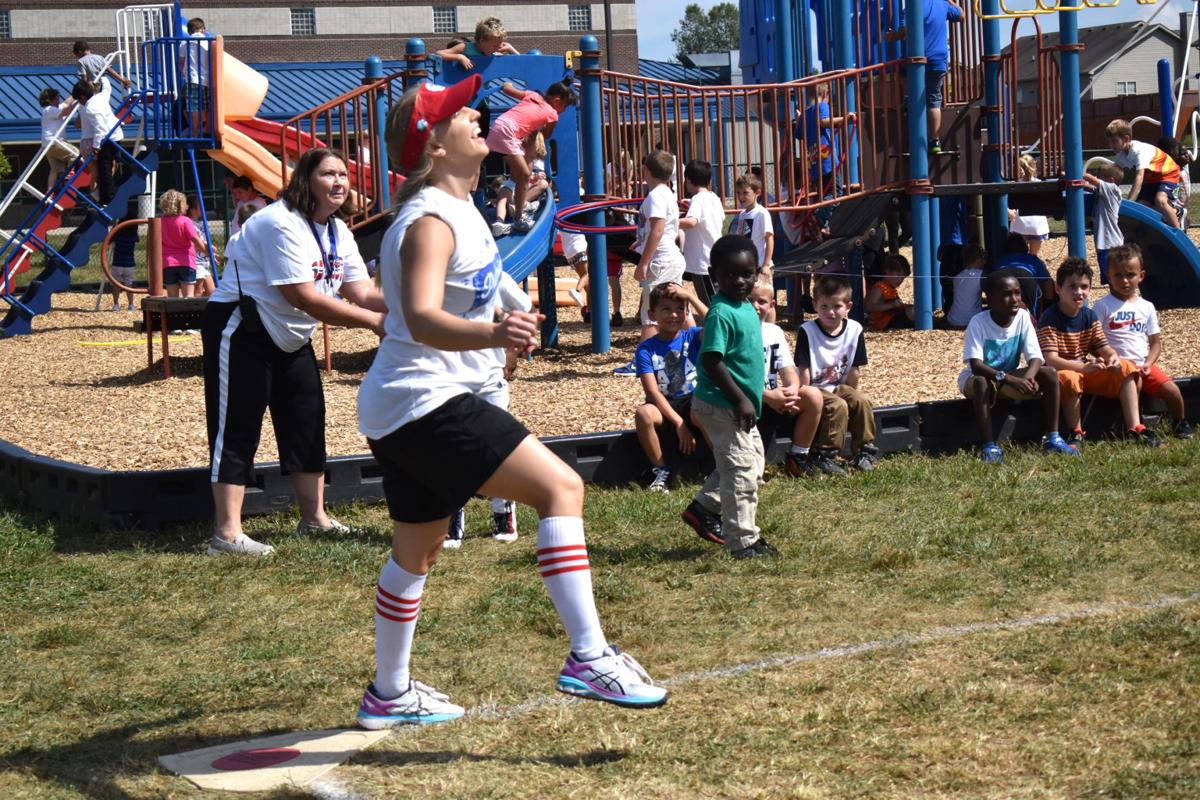 Peaks Mill Principal Cassie House looks up after kicking a ball during a kickball game at the school on Tuesday, Sept. 17, 2019. (Photo by McKenna Horsley) 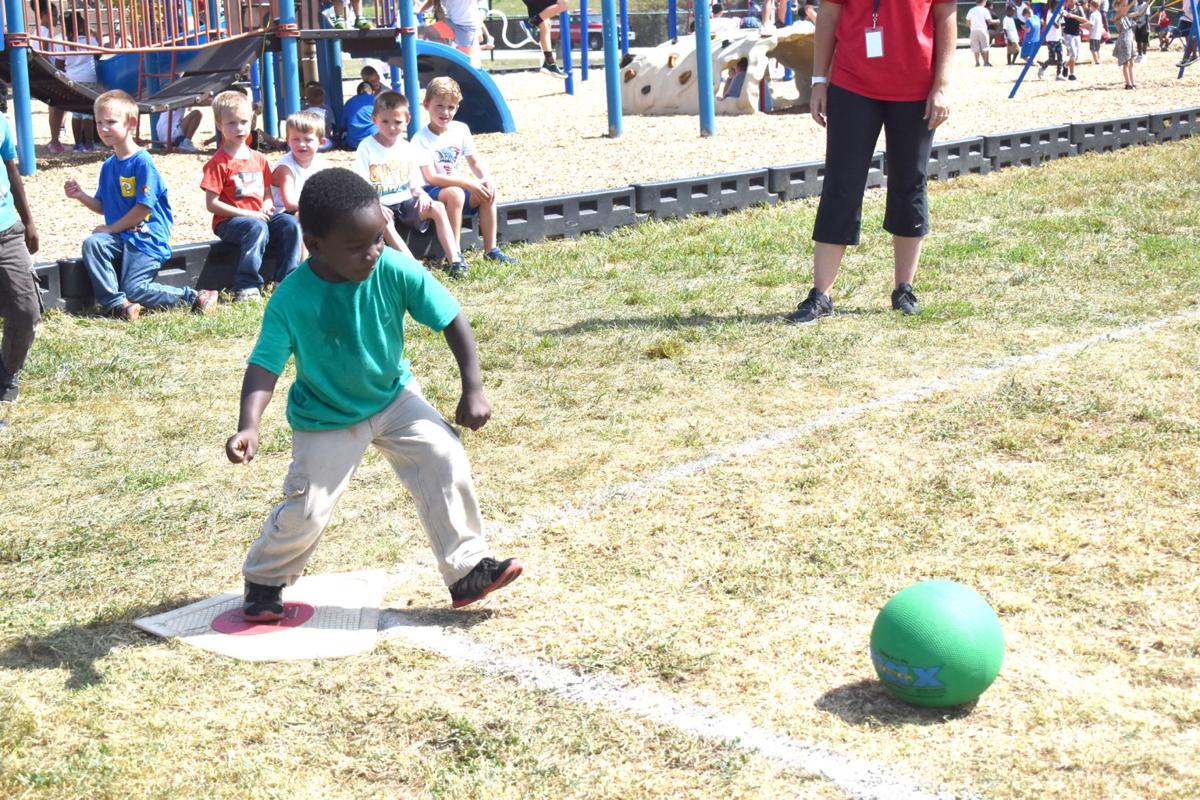 Peaks Mill Principal Cassie House looks up after kicking a ball during a kickball game at the school on Tuesday, Sept. 17, 2019. (Photo by McKenna Horsley)

Peaks Mill Principal Cassie House said she invited the first responders to enjoy some time outside with the kids. Franklin County Schools Central Office staff stopped by for a game or two later on Tuesday afternoon.

“Our hope is that it will increase attendance,” House said, noting that improving attendance of students is a goal of the school this year.

Police officers and firefighters ran bases, caught fly balls in the outfield and gave students high-fives as they played kickball.

Assistant Police Chief Maj. Lynn Aubrey said the officers “had a blast” playing with the students. She said the department tries to do outreach with youth in order to form connections within the community.

“It lets the community know who we are and we get to meet people that we might not meet any other time. And with events like this, we get to connect with the children. Some of them may be a little scared of police officers, so this gives them a chance to see us on more of a personal level and understand that we are nothing to be afraid of, that we are friendly and here to help them,” Aubrey said before turning back to the game to cheer on a student who took first base.

High Attendance Day promotes school attendance across the state, though FCS Communication and Information Coordinator Kristen Waits said the district’s attendance was actually down on Tuesday due to sickness.

Other schools in the district held similar events to encourage attendance. Collins Lane Elementary had a “Dress for Success” Day; students dressed to the nines, walked on a red carpet before entering school and had a white-tablecloth lunch. Hearn Elementary had a cookout for students during lunch. Bondurant Middle entered students who were at school all day in a drawing to win a Hydroflask water bottle.