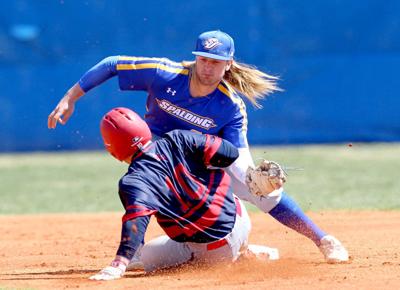 Eric Meyer is making the most of his second chance with baseball.

A 2012 graduate of Franklin County, Meyer recently completed his junior year at Spalding University as the Player of the Year in the St. Louis Intercollegiate Athletic Conference.

Meyer began his college career at Transylvania but left after a year without playing baseball.

That was the beginning of a three-year absence from school and baseball.

“Drugs were the primary issue,” said Meyer, 25. “I got involved with drugs late in my career at Franklin County, and once I was in college I was exposed to different drugs.”

He had a couple of brushes with the law, including one after he’d moved to Florida. After completing a drug court there in 2016, he was ready to come home.

Meyer began applying to different schools in state and was accepted by several, including Spalding, which had recruited him out of high school.

“They had a different coach than who recruited me,” he said. “I knew a couple of players on the team, including Q (FCHS graduate Quenton Brownlee). I met the coach and talked to him for about 15 minutes. I told him everything; I was honest.

“I was guaranteed nothing, but I made a pretty good showing on the field. I had decent mechanics, and they were losing a lot of guys the next year.”

So Meyer joined the Golden Eagles.

“I definitely did miss it,” Meyer said of baseball, “but I’d experienced closure with it, and I was OK if it didn’t work out.”

But having athletics as part of his college experience has helped him academically.

“It keeps me more engaged in class,” said Meyer, who is majoring in social work with a minor in addiction studies. “I think about my GPA, and now I’m at the end of my junior year and I’ll be getting a college degree.”

After spending time on the bench at the beginning of last season, his first with the team, Meyer appeared in 36 games with 29 starts. He batted .398 with 26 RBI and was second team all-conference.

Spalding went 31-12, including 16-6 in conference games, and lost the elimination game in the conference tournament.

This year the Golden Eagles finished the season with a 31-12 record, including 18-4 in conference, and were runners-up in the conference tournament, just missing a bid to the NCAA Div. III national tournament.

“It was pretty disappointing,” Meyer said. “We thought we deserved a (at-large) bid, but the committee thought otherwise. I think if there had been one more bid we would have gotten it.”

Now Meyer is turning his attention to next season.

“It’s going to be weird not having Q and the other seniors around,” he said. “My goal next year is to create a path for the younger players, to be a good role model on and off the field.

“I always go hard in practice and games, and I try to make good decisions. Some listen and some don’t, but you can only be an example if they look up to you.

“I’m trying to be the best person I can be in that regard.”

Ask the City Commission Candidates: Discuss an important issue for Frankfort that not enough people are talking about.

Double-issue of FRANK. magazine to be included in Friday's State Journal

Registration for Easter at the Trace opens March 5

You Asked: When will the Wilkinson Boulevard pedestrian overpass be completed?

Should the Frankfort City Commission pursue a conservation easement as a means of permanently banning bicycles in Leslie Morris Park?