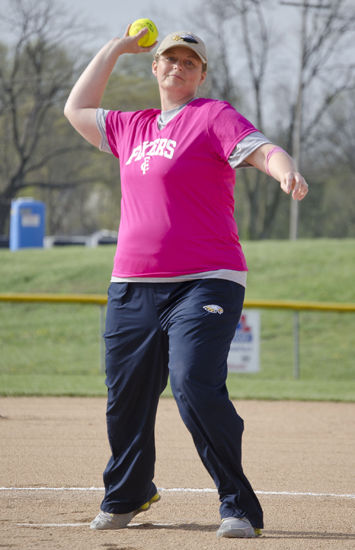 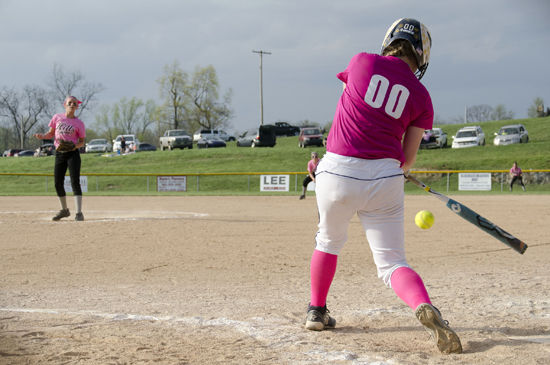 Franklin County and Western Hills’ volleyball teams have been part of “Dig Pink” for years.

Now the two schools’ softball teams have paired up to “Beat Cancer with a Bat.”

FCHS hosted the Lady Wolverines Tuesday at Sally Gaines Field in the first joint “Beat Cancer with a Bat” event for the two teams.

“Beat Cancer with a Bat” is a fundraiser for the National Foundation for Cancer Research and is an annual event in which college and high school softball teams across the country are invited to contribute to the NFCR by pledging to donate proceeds from at least one game.

“This is a great opportunity to raise money for cancer research,” FCHS coach Tracy Spickard said. “I don’t think there’s a single person out here whose life has not been impacted by cancer.”

One of those whose life has been impacted is Matosha Thacker, who threw out the first pitch Tuesday.

Thacker was diagnosed with rectal cancer in August 2012. A first-grade teacher at the Early Learning Village, she and her husband Joey, the head girls basketball coach at FCHS, have three daughters.

“Coach Spickard asked me if I could do it, if I felt up to it,” Thacker said. “It was a very nice thing for her to do and it was an honor.

“It’d be nice if every sport would donate the proceeds from one game. It’s for a good cause, that’s for sure.”

And Thacker sees benefits that last long after the event ends.

“It’s the research they do,” she said. “There are new experimental drugs all the time. They’ve come a long way, but the medicines aren’t cheap.

“There are experimental drugs and with me going through this myself, I’ll try anything.”

“It was fun to go out and see a softball game,” Thacker said. “I love softball, and I played at PikeÂ­ville College for a semester.”

Thacker, along with both teams, wore a pink jersey for Tuesday’s game.

In addition to donating the gate proceeds, other fundraising activities took place — general donations were taken and there was a bake sale.

“We did this two years ago, but it wasn’t a Western Hills game,” Spickard said, “and last year it didn’t work out with our schedule.

“Jeff and I talked about this in August when we were working on our schedules,” she said, referring to WHHS coach Jeff Pritchett. “We thought it would be nice to do, and I’m glad it worked out.

“The Foundation is great. You go online and sign up, and they work together with you. It’s a great opportunity to raise money for cancer research.”

For the past several years the WHHS and FCHS volleyball teams have played each other in a match that is designated as a Dig Pink event, a fundraiser for the Side-Out Foundation that assists cancer patients.

Besides the gate going to the Side-Out Foundation, the volleyball teams also hold a silent auction and sell T-shirts to raise money.

The softball teams hope to make this an annual events, and Spickard would like to see the softball event expand, adding fundraisers such as a silent auction.

“The founder of this program (Sally Gaines) died of cancer,” Spickard said. “She fought a courageous battle, and that makes this near and dear to our hearts.”