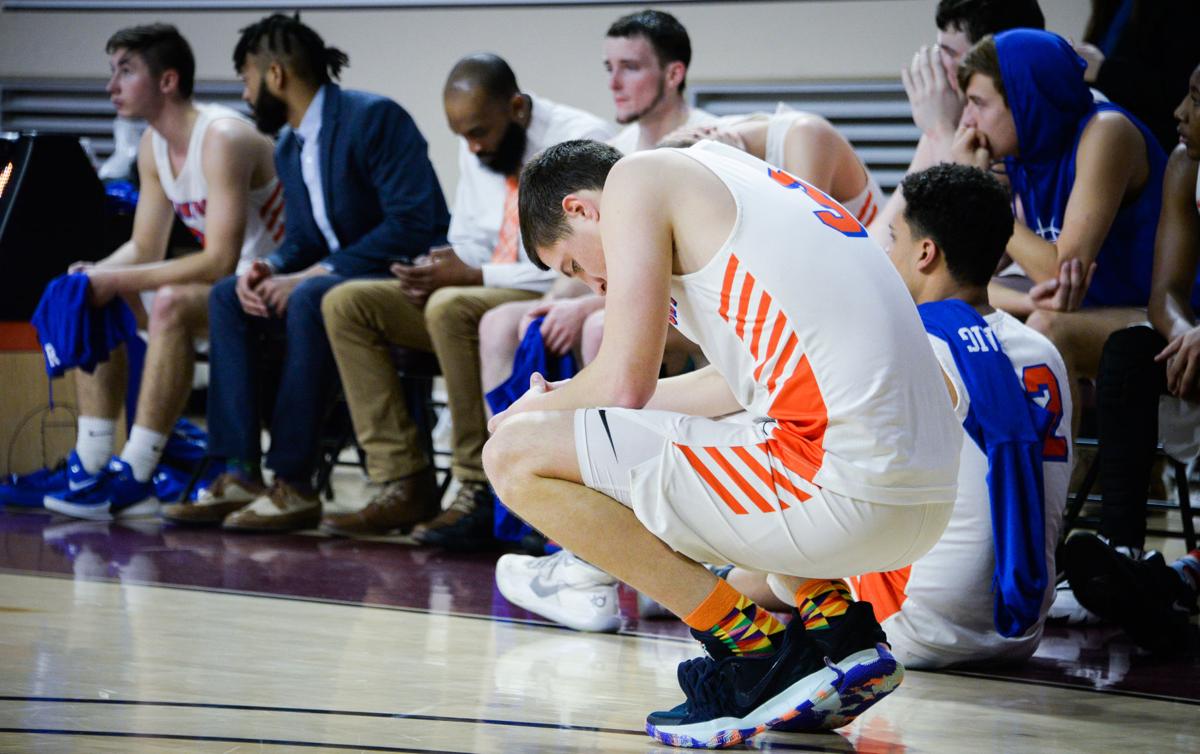 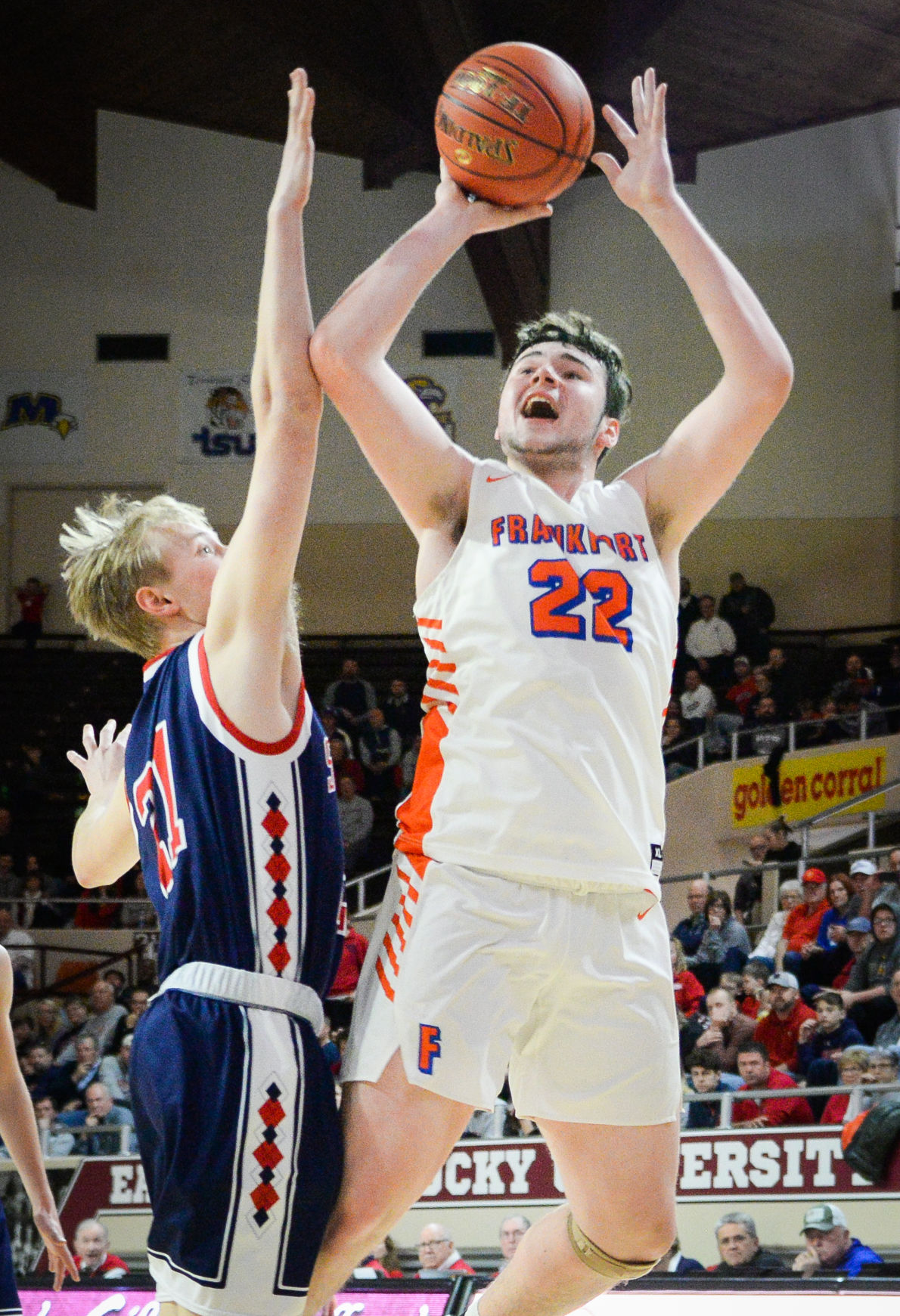 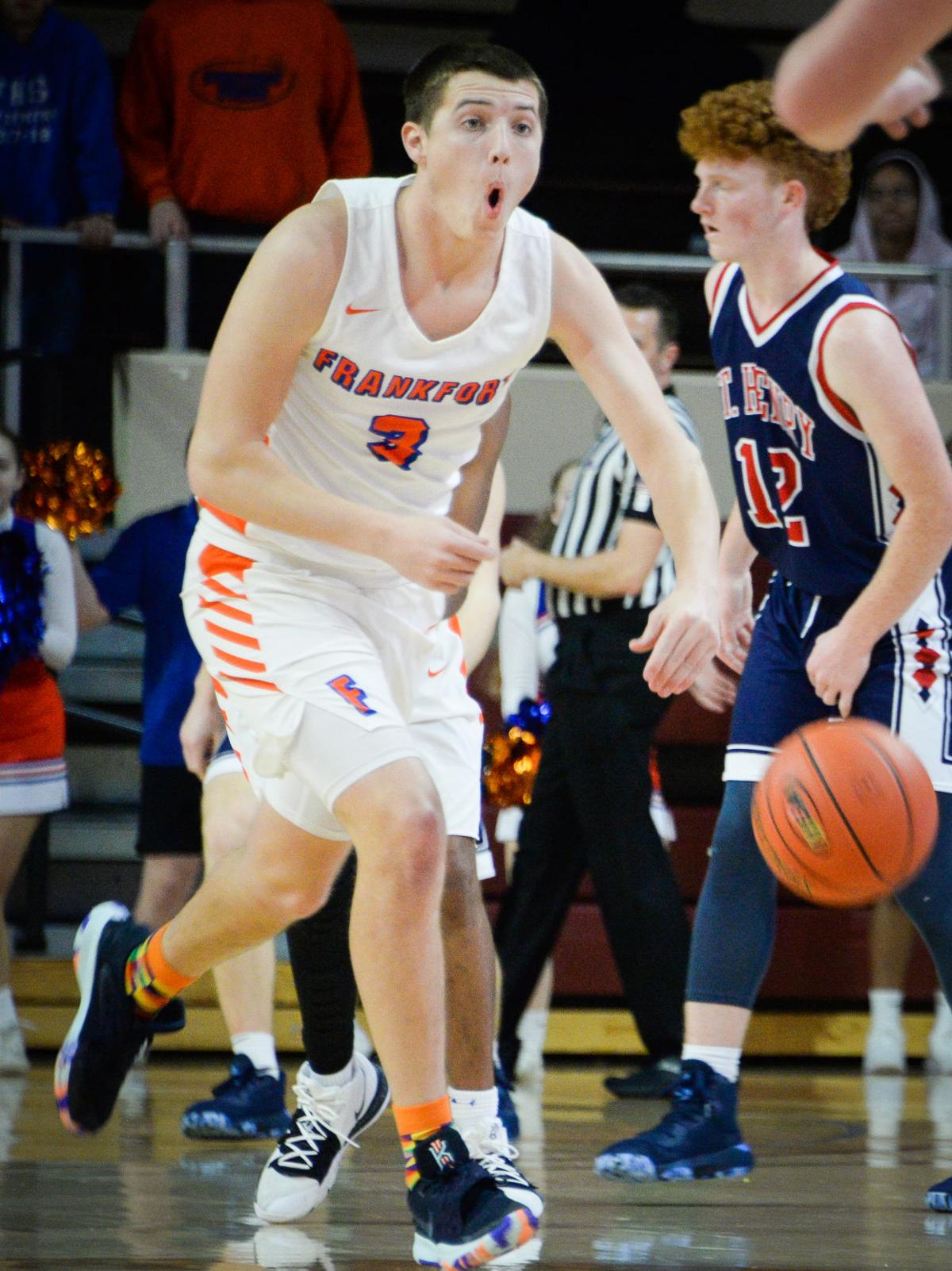 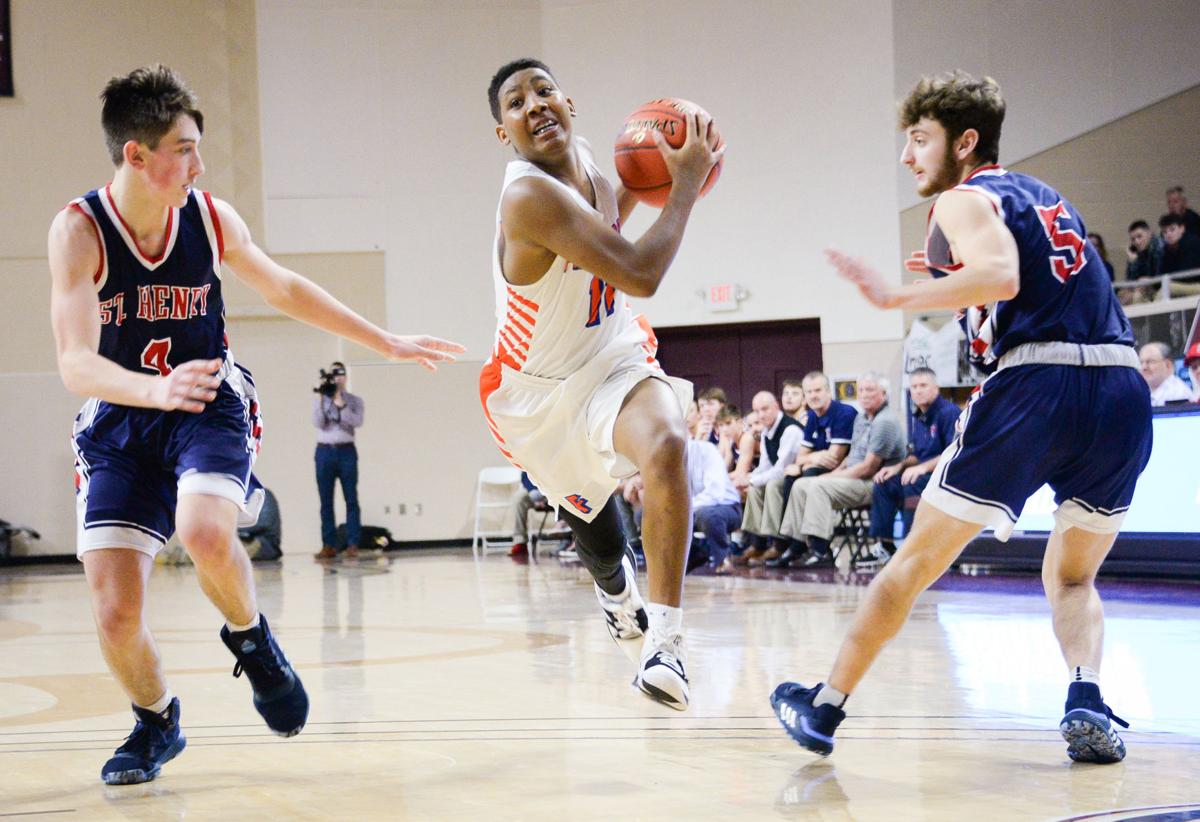 Frankfort's Jordan Blythe (11) tries to pass by St. Henry's Conner Shea (4) and Alex Daniel (5) on his way to the basket during the Kentucky All "A" Classic championship game Sunday at Eastern Kentucky University. FHS lost 77-70. (Hannah Brown | State Journal) 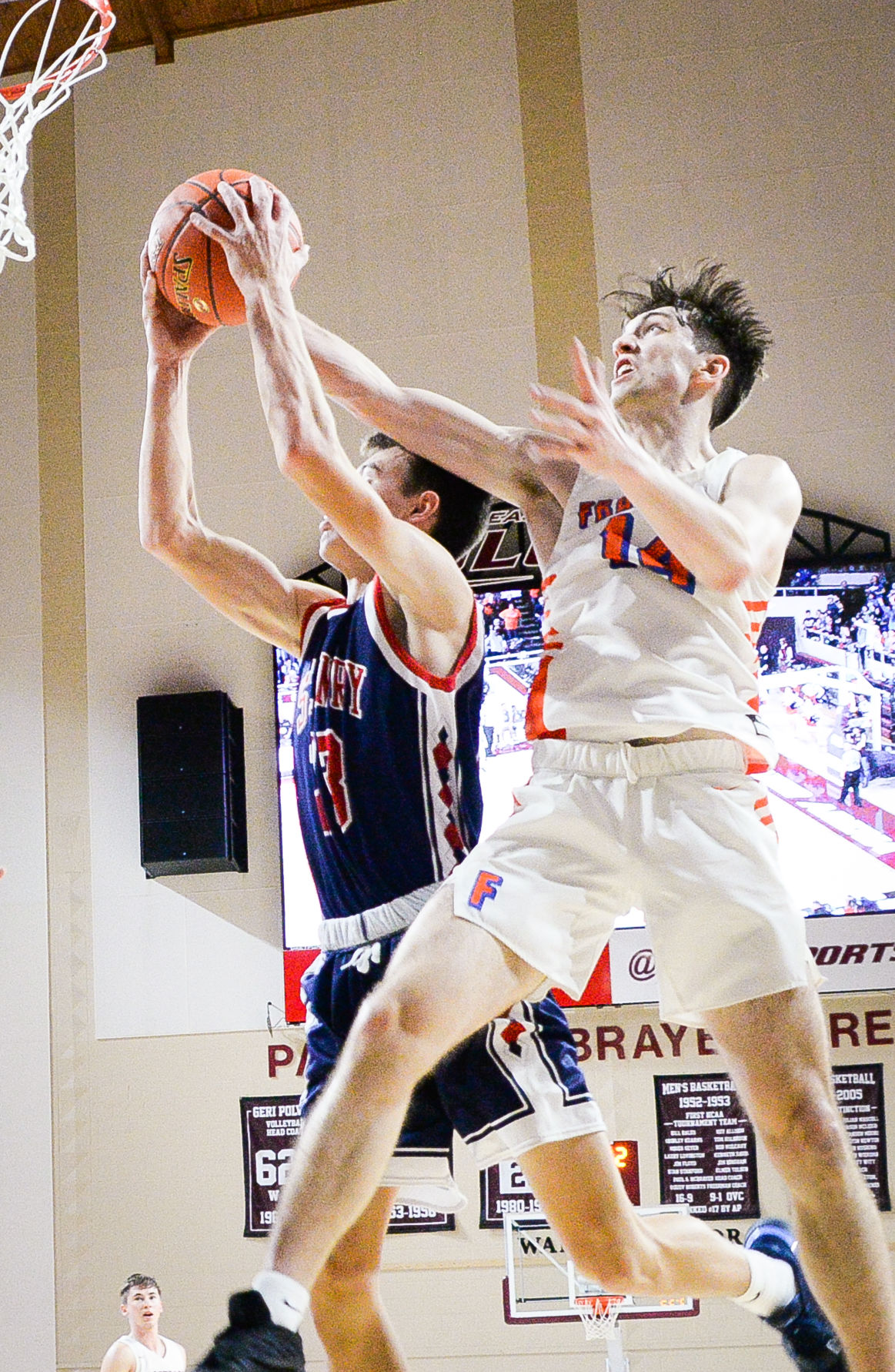 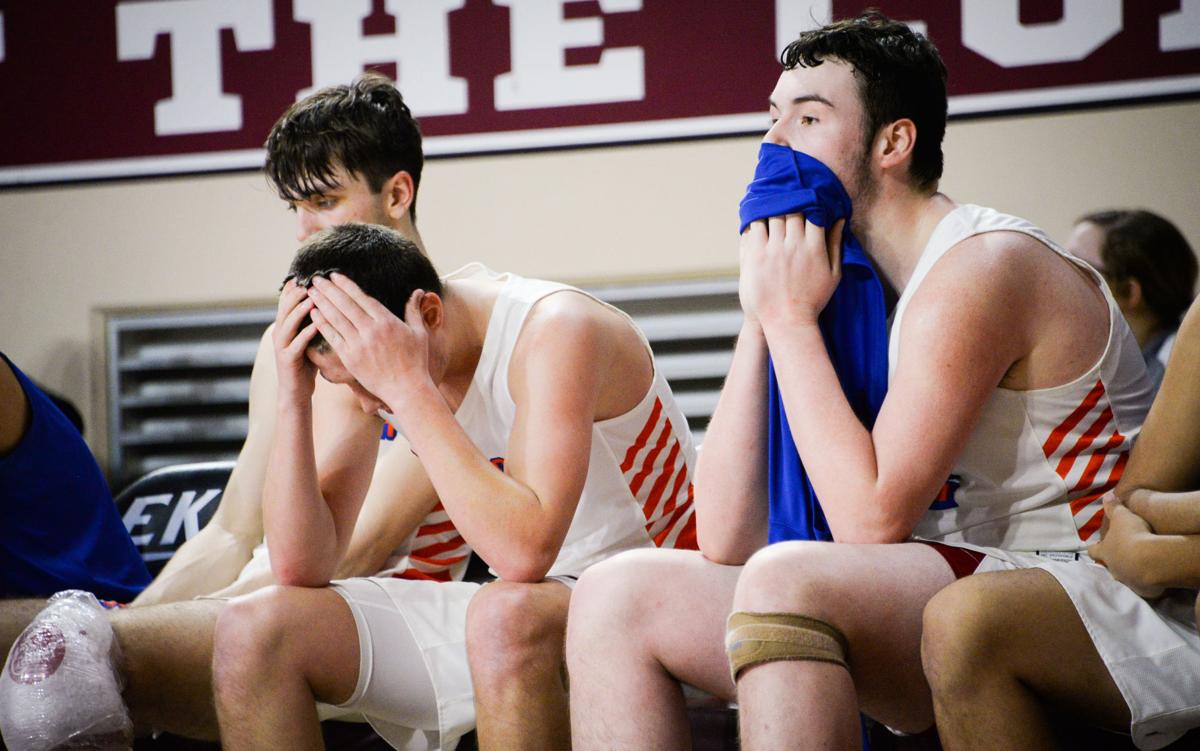 Frankfort's Chaz Austin (14), Reed Miklavcic (3) and Jackson Twombly (22) sit on the bench after being taken out of the game toward the end of the fourth quarter of the Kentucky All "A" Classic championship game Sunday at Eastern Kentucky University. FHS lost 77-70. (Hannah Brown | State Journal)

Frankfort's Jordan Blythe (11) tries to pass by St. Henry's Conner Shea (4) and Alex Daniel (5) on his way to the basket during the Kentucky All "A" Classic championship game Sunday at Eastern Kentucky University. FHS lost 77-70. (Hannah Brown | State Journal)

Frankfort's Chaz Austin (14), Reed Miklavcic (3) and Jackson Twombly (22) sit on the bench after being taken out of the game toward the end of the fourth quarter of the Kentucky All "A" Classic championship game Sunday at Eastern Kentucky University. FHS lost 77-70. (Hannah Brown | State Journal)

RICHMOND — Down by 16 points at the end of the third quarter Sunday, Frankfort's boys basketball team did what it had been doing throughout the Kentucky All "A" Classic.

That keyed a rally for the Panthers that came up short, with St. Henry winning the All "A" Classic championship game 77-70 at Eastern Kentucky University.

"Our kids have shown resiliency the whole week," FHS coach Chris O'Bryan said. "They played their hearts out, and I couldn't be more proud."

Frankfort, shooting 54% in the first quarter, ended the period with a 17-16 lead.

With 33 seconds left in the second period St. Henry led 38-24, but FHS closed out the first half with a 3-pointer from Jackson Twombly and a layup by Charlie Ellis in the final 12 seconds to trail 38-29 at the break.

"We missed some assignments in the second quarter," O'Bryan said, "and when you let a team as good as they are have a lead, it can be hard to come back."

St. Henry (16-3) grabbed the momentum to start the third quarter, scoring the first four points, and the Crusaders led 57-41 going into the final period.

The Panthers had the lead down to five points twice in the final three minutes, the last time with 1:34 remaining, but they couldn't get closer.

"We cut it to five points," O'Bryan said. "We had our opportunities. We could have folded our tents but we kept playing."

The Crusaders went 11-for-12 from the free throw line in the final 1:13 of the game to seal the victory.

FHS began play Jan. 13 in the 11th Region All "A" Classic on a nine-game losing streak. Sunday's loss ended a six-game winning streak for Frankfort (11-13).

"We want to take what we learned here and use it the rest of the year," O'Bryan said. "We have four more district games left, and we want to finish strong and make a run in the postseason."

Twombly led Frankfort with 17 points. Also in double figures for the Panthers were Jordan Blythe with 14 points, Charlie Ellis with 12 and Will O'Bryan with 10.

Named to the all-tournament team from Frankfort were Twombly, Will O'Bryan and Chaz Austin.

This is St. Henry's second state All "A" Classic title. The Crusaders also won the championship in 2003, and they defeated Frankfort in the semifinals that year.

This was Frankfort's sixth trip to the state All "A" Classic and its first in 17 years. Its best finish prior to this year was as a semifinalist in 2003.

"This is a once-in-a-lifetime opportunity for these guys," O'Bryan said. "They did something no one's done before in the history of this school, and they have nothing to be ashamed of."

Frankfort's next game is a district contest Tuesday at The Frankfort Christian Academy.