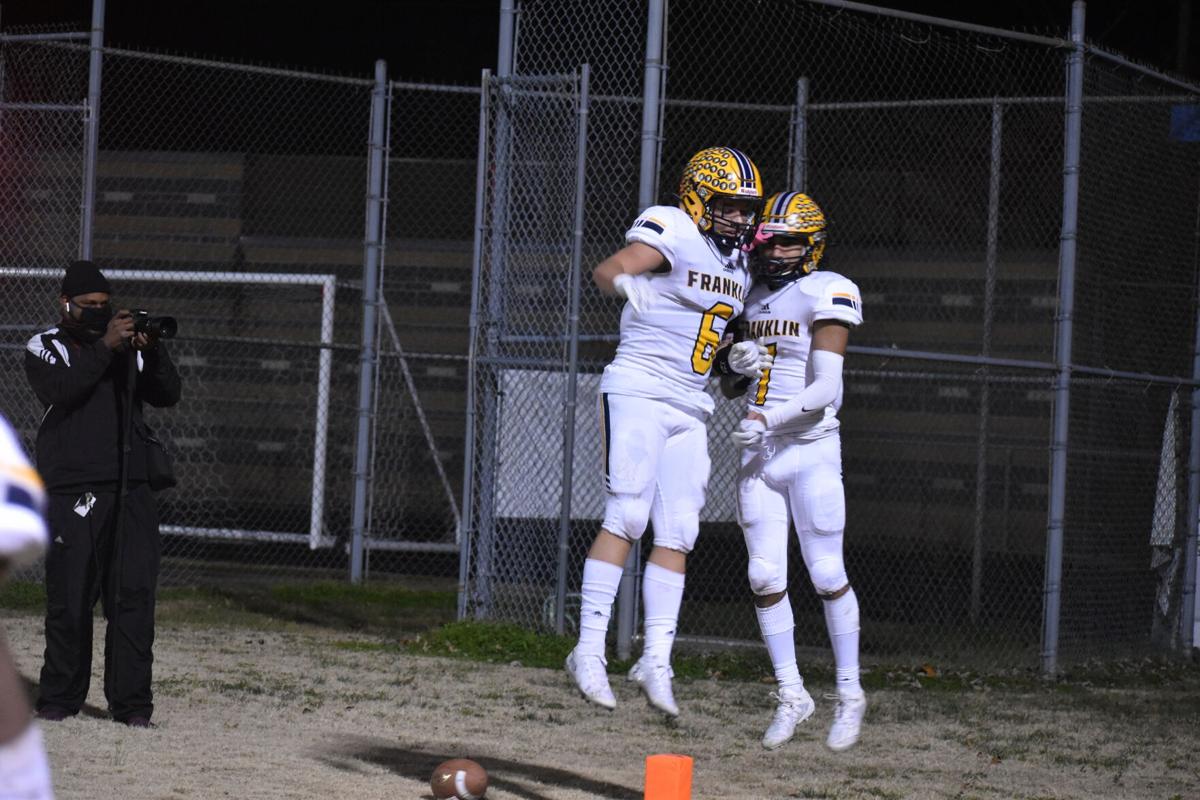 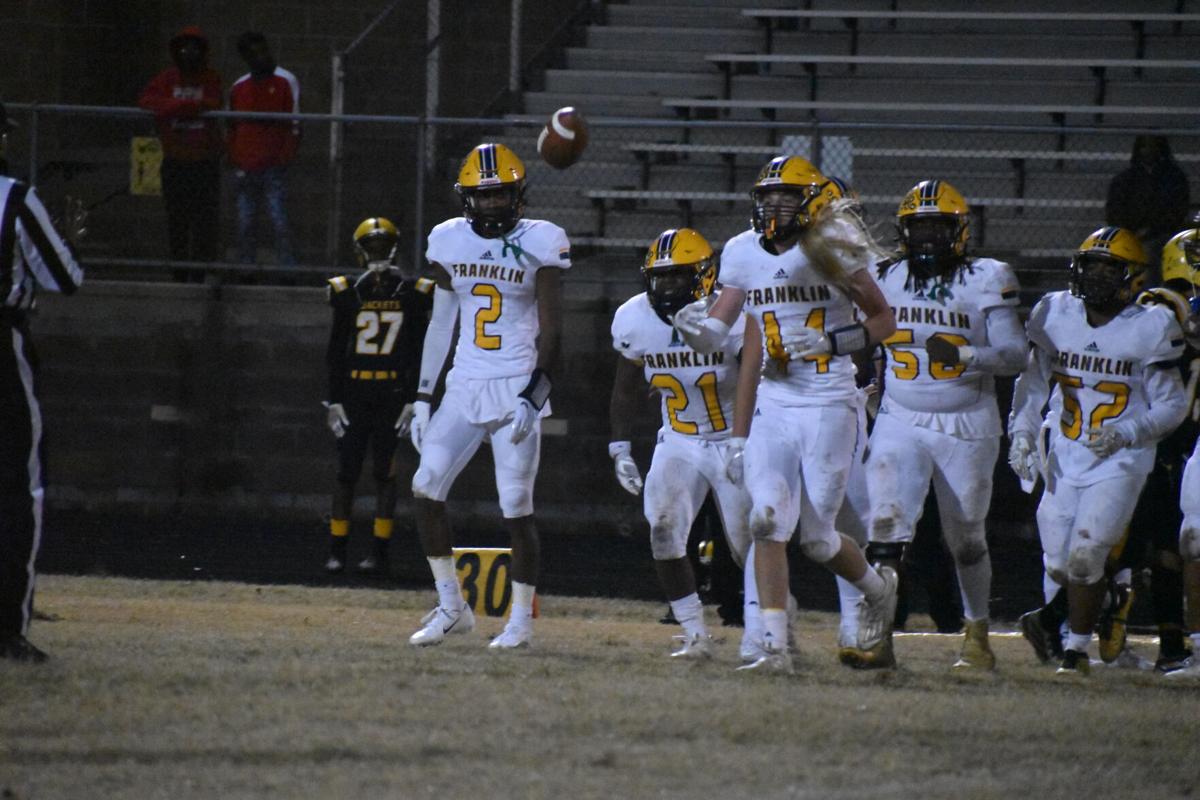 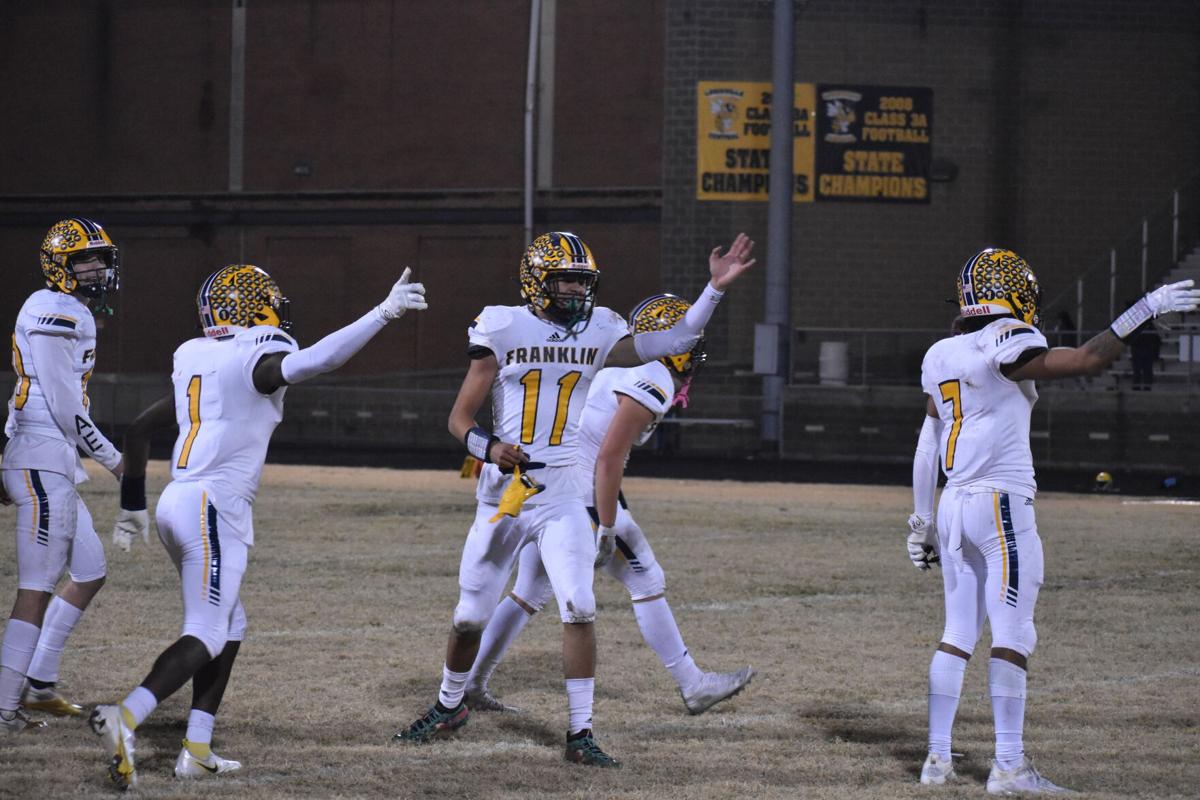 Franklin County's Jayden Mattison (11), along with Bryce Tucker (1) and Zack Claudio signal for a first down after a measurement during Friday's playoff game at Central. At the far left is FCHS' Nick Broyles. Franklin County won 42-6. (Linda Younkin/State Journal)

Franklin County's Jayden Mattison (11), along with Bryce Tucker (1) and Zack Claudio signal for a first down after a measurement during Friday's playoff game at Central. At the far left is FCHS' Nick Broyles. Franklin County won 42-6. (Linda Younkin/State Journal)

Editor's Note: This story was updated at 8 a.m. on Nov. 28 to correct Franklin County's opponent next week.

“Honestly, probably 150 times,” James said. “I watched it every night before going to bed, every morning when I woke up and a few times in between.

“I wanted to know them inside out.”

He did, and that knowledge helped the Flyers defeat Central 42-6 Friday at Central High School Stadium to win the Class 4A District 4 title.

The Flyers (7-1) will play for a regional championship at home Dec. 4 against Allen County-Scottsville, a 28-13 winner over Warren East Friday.

“Our kids were ready,” James said, “and they did what they were supposed to do.”

The last three games between Franklin County and Central were decided by a total of 11 points.

On Friday, FCHS scored the first touchdown early in the first quarter on a pass from Nick Broyles to Kaden Moorman, and the Flyers kept the lead the rest of the way.

Central scored late in the first quarter, on a 2-yard run by Malachi Williams. The conversion run failed, leaving FCHS ahead 7-6 when the quarter ended.

The Flyers put the game away in the second quarter, scoring four touchdowns.

The first came on a 2-yard run by Peyton Ledford. Fred Farrier scored two touchdowns on passes from Broyles covering 34 and 46 yards, and Zack Claudio tallied a touchdown on a scoop and score.

Leading 35-6 at halftime, the Flyers scored the last touchdown of the game on an 18-yard pass from Broyles to Claudio. With Franklin County leading 42-6 with 9:30 left in the third quarter, the game went to a running clock.

FCHS’ Owen Powell was 6-for-6 on point-after kicks.

The win broke a two-game losing streak to the Central, both heartbreakers for the Flyers. Besides the 18-16 loss in October when the Yellow Jackets scored with less than 10 seconds left in the game, Central ruined the Flyers’ perfect season last season with an 18-7 win in the second round of the playoffs.

“That one hurt,” FCHS’ Blair Tate said about last year’s playoff loss. “I think we’ve had the score said to us three times a day for over a year.

“It’s good to come out and get the win.”

Tate had an interception late in the second quarter that started a touchdown drive, and on the final play of the game, Brandon Atkinson broke up a touchdown pass, knocking the ball away from Central’s Joshua Bivens in the end zone.

“I’m proud of the kids,” James said. “They played hard all night. When you play a good team, you can’t have a lull because that lull can cost you.”