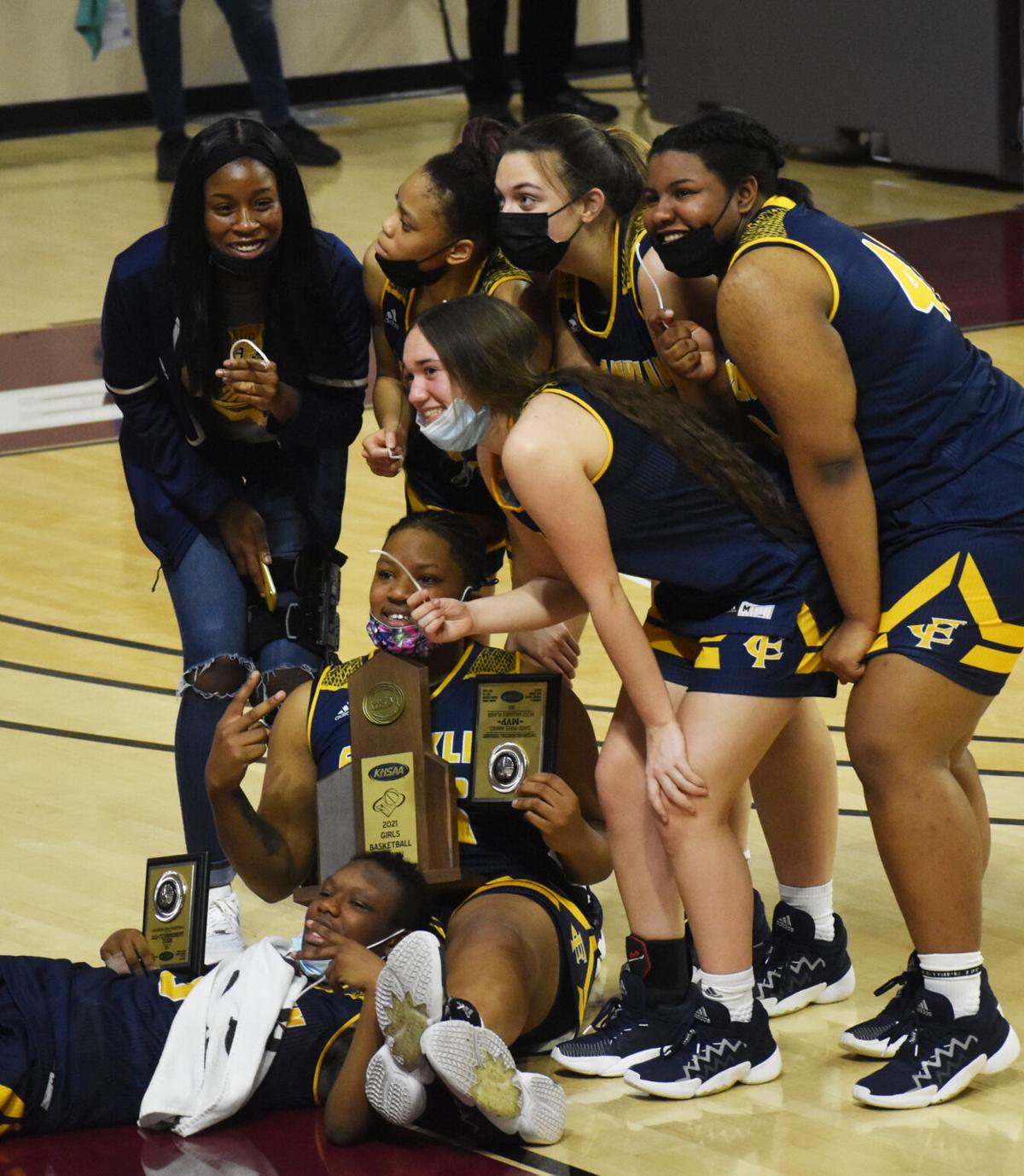 Members of Franklin County's girls basketball team celebrate after winning the 11th Region tournament last week. Nevaeh Carter is lying in front of the group, and Patience Laster is seated. Standing, from left, are Jazmin Chambers, Shauvi Kennedy, Lauren Meadows, Gracie Thacker and Jaden Oldham. FCHS plays South Laurel in the first round of the Mingua Beef Jerky Girls Sweet 16 State Basketball Tournament Wednesday at 5 p.m. at Rupp Arena. Tickets may be purchased at https://khsaa.org/sweet-sixteen-ticket-sales/ and the game will be livestreamed at www.khsaa.tv. It will also be broadcast by Froggy Country at 104.9 FM. (Chanda Veno/State Journal) 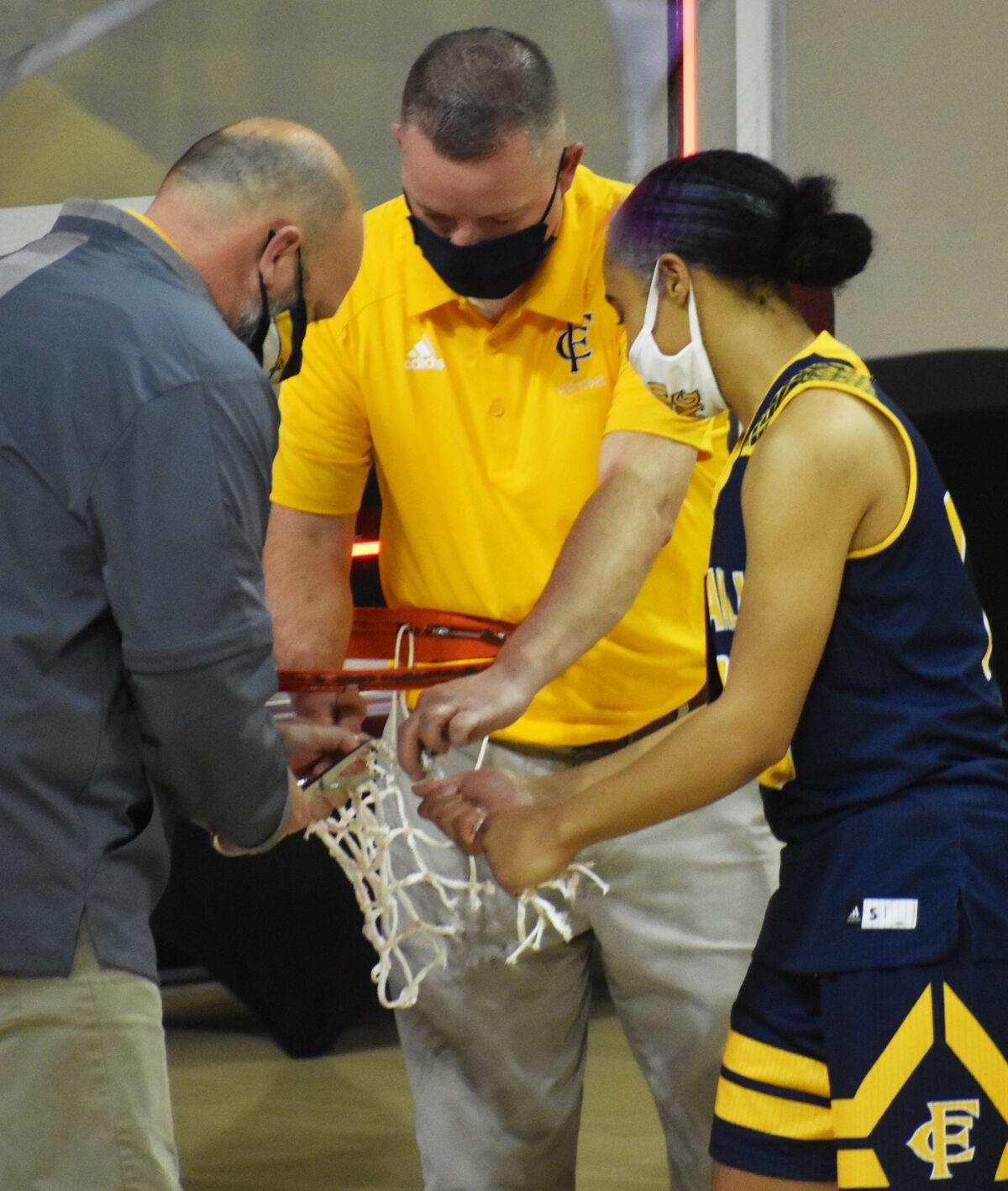 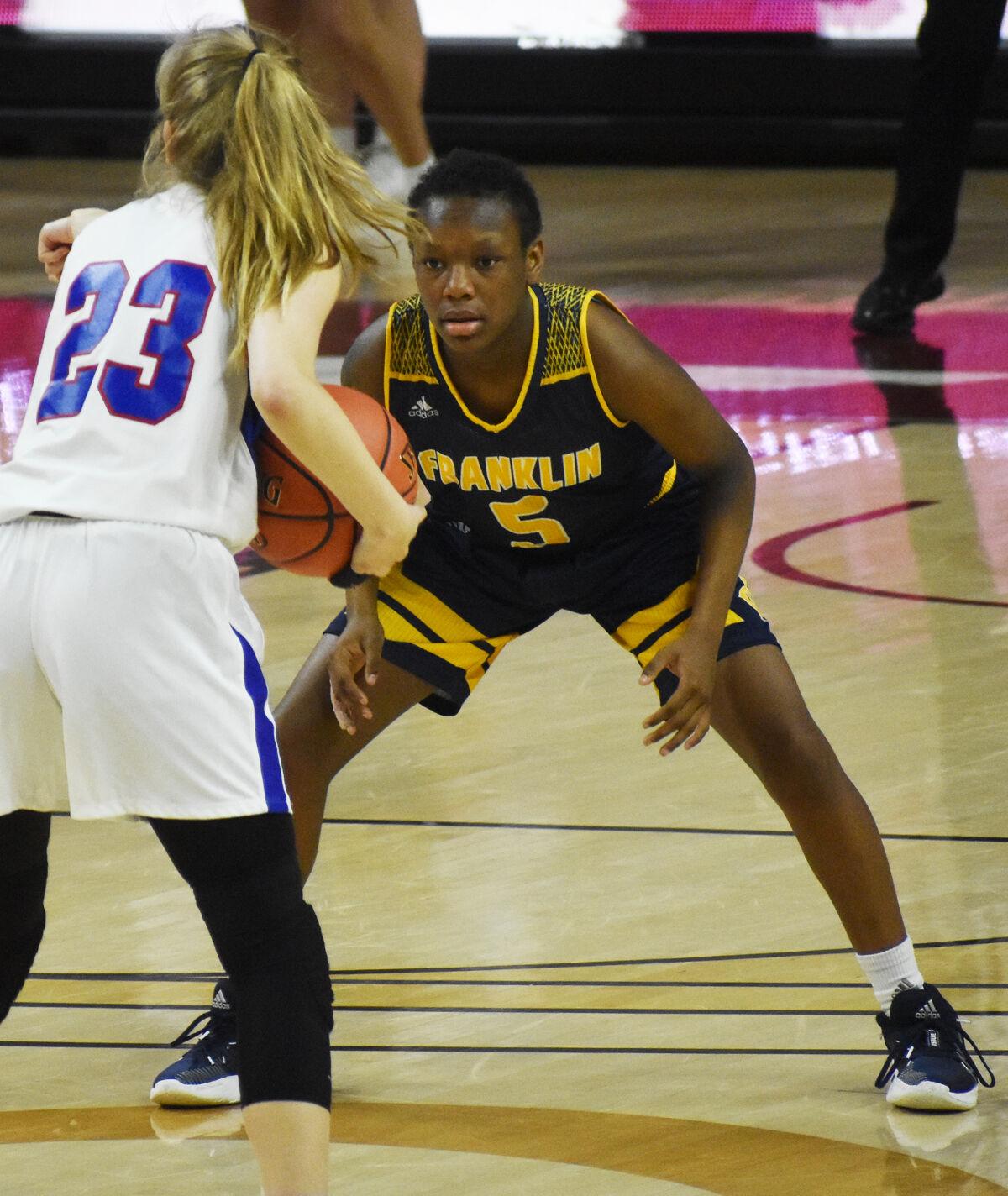 The Franklin County High School Lady Flyers will face South Laurel in the opening round of the Mingua Beef Jerky/KHSAA Girls Sweet 16 at Rupp Arena at 5 p.m. on Wednesday, April 7.

The Lady Jaguars went undefeated in both the 49th District and 13th Region until they met South Laurel, the defending tourney winners, in the championship game. North Laurel finished the season at 24-5.

The Lady Cardinals were led by Rachel Presley, who recorded a double-double with 18 points and 13 rebounds and was named tournament MVP.

The Lady Flyers automatically advanced to the 11th Region championship game after a COVID issue arose in the Tates Creek program, a team FCHS was slated to play in the second round.

Franklin County ousted Madison Central 64-28 in the first round of the region tourney.

In the 11th Region tournament, South Laurel opened with a 51-32 win over Knox Central in the first round and beat Bell County 65-62 to advance to the final against North Laurel.

FCHS and South Laurel have played two common opponents this season — Bullitt East (22-2), which is representing the 6th Region at the Sweet 16, and Berea, which finished the season 11-10.

Both the Lady Cardinals and the Lady Flyers lost to Bullitt East on their home courts by nearly the same margin. On Jan. 16, South Laurel lost 63-39. On Feb. 22, Franklin County lost 62-39.

In early to mid-January, South Laurel missed three games due to COVID. They were against Jackson County, Christian Academy of Louisville and Russell.

FCHS also had a game against Russell canceled on Jan. 9, but the program had a COVID outbreak from the end of January until mid-February that resulted in 10 games being nixed.

The Lady Flyers are on an eight-game winning streak heading into the matchup. The Lady Cardinals have won six in a row.

Southwestern is 20-3 and won the 12th Region championship with a 62-56 win over Mercer County on Sunday. One of the Warriors’ three losses was the season opener at Franklin County. The Lady Flyers pulled out a 51-49 victory.

The Lady Bearcats (25-2) knocked FCHS out of the Sweet 16 in the opening round last year before the remainder of the tournament was canceled due to the coronavirus pandemic.