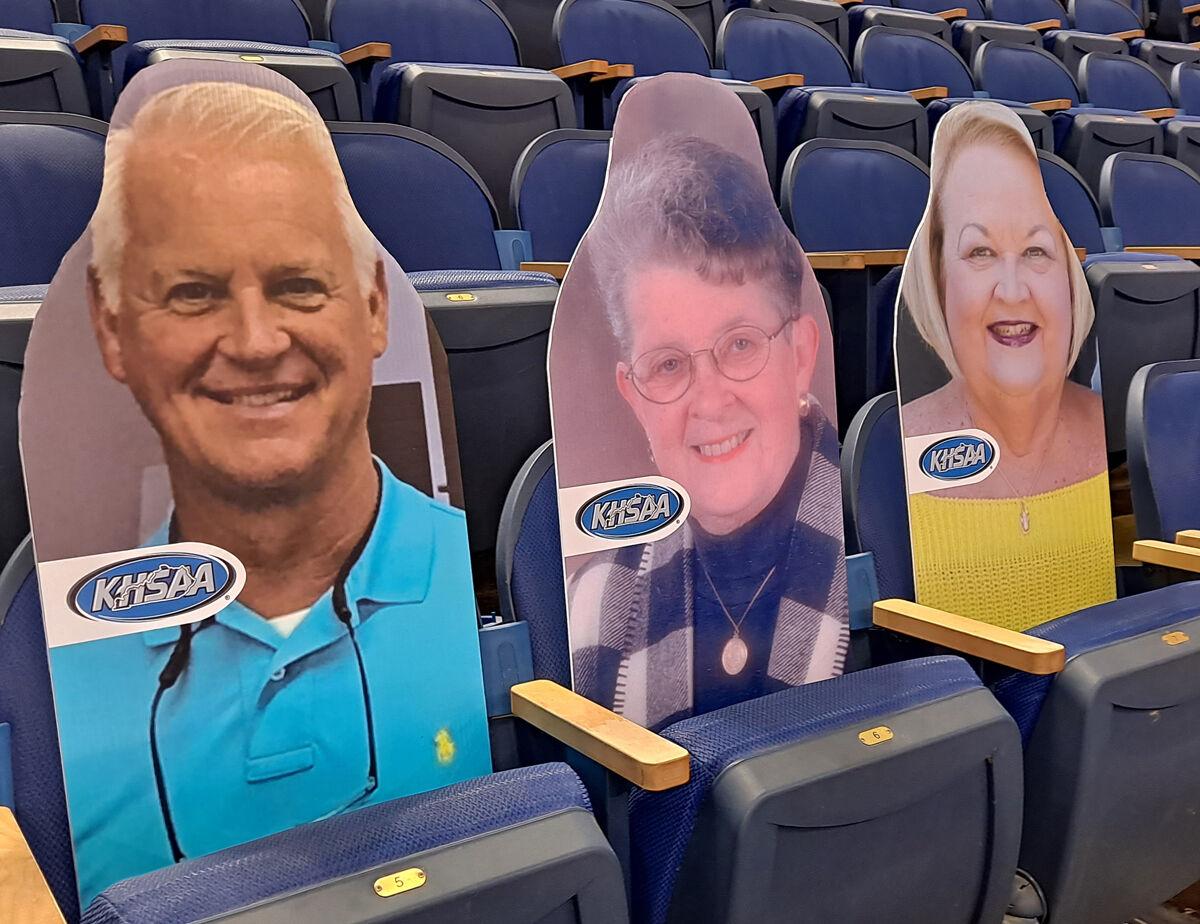 This cutout of Donna McGohon, right, will be in a lower arena seat near midcoast at Rupp Arena again for this week’s girls state tournament. (Photo by Larry Vaught) 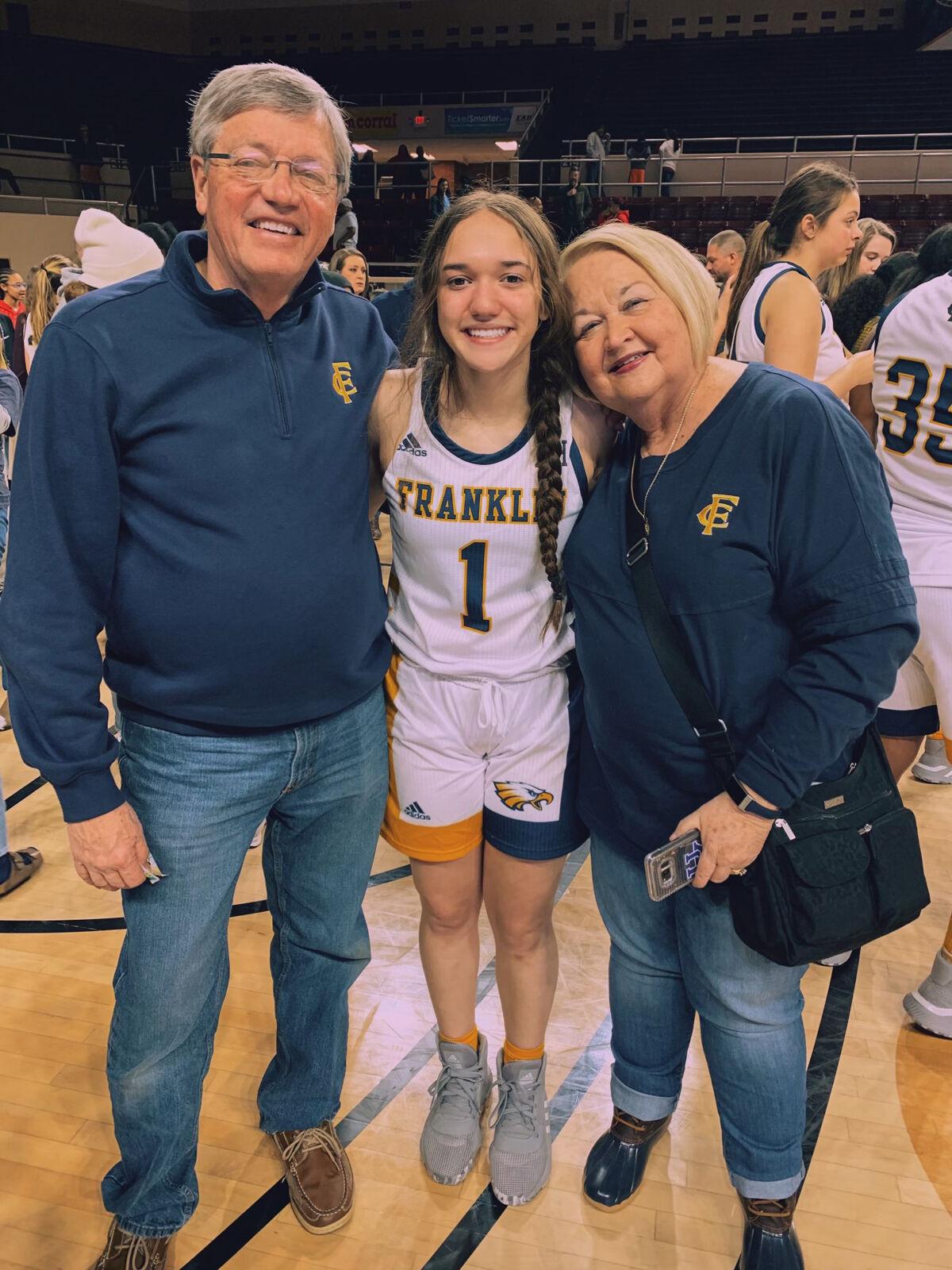 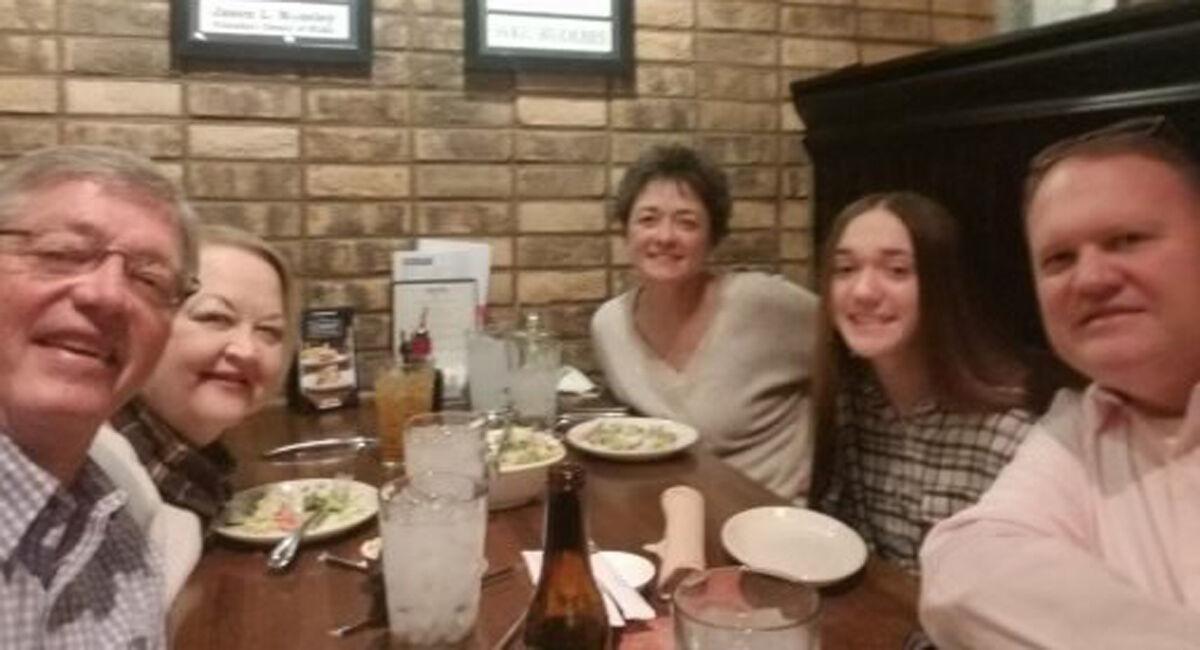 Donna McGohon, second from left, with her family at Malone’s in Lexington two nights before her passing last month. (Photo submitted)

This cutout of Donna McGohon, right, will be in a lower arena seat near midcoast at Rupp Arena again for this week’s girls state tournament. (Photo by Larry Vaught)

Donna McGohon, second from left, with her family at Malone’s in Lexington two nights before her passing last month. (Photo submitted)

Donna McGohon, 72, of Woodford County had recently been diagnosed with cancer but had received a “pretty positive prognosis” and was hoping to keep watching her granddaughter, Franklin County junior guard Lauren Meadows, play in the state tournament at Rupp Arena.

However, the day she started her first round of chemotherapy last month she was home resting when she lost consciousness and passed away.

However, when Franklin County (17-5) plays South Laurel (20-10) Wednesday at 5 p.m. in Rupp Arena, McGohon is going to be there just like she was at last week’s boys state tournament because her son-in-law, FCHS assistant coach Lee Meadows, purchased a cutout of her. She can be found near midcourt just a few rows from the court.

"Donna's passing was sudden and was a shock to us all. Our head coach, Joey Thacker, sent me the link about the cutouts and thought it might be a cool way to honor her,” Lee Meadows said. “She loved to watch her granddaughter play and had become a big Lady Flyer fan.

“After talking to my wife, I decided to do it. Donna loved UK and to see her son-in-law and granddaughter, who are both Louisville fans, be on UK's floor made her proud and laugh last season (at the state tourney). So I thought she needed a return trip this year.”

Lee Meadows admitted he had a “tear in my eye” last week when he saw a picture of McGohon at Rupp Arena during the boys tourney.

“Lauren is not a very emotional person. I showed her the picture and she thinks it's cool that they allowed the cutouts,” Lee Meadows said. “She saw the picture (of her grandmother) from the tweet. That was the first time she knew about it. It made her smile. She loved that her Nanny and PawPaw were at all her games.

“I think it's a cool way to keep her spirit alive doing something she loved. She was at every game whether Lauren got in or not. She was always so proud of her and always cheered for the Lady Flyers. She loved to watch her play.”

Lauren didn’t play in last year’s state tourney loss to Anderson but was in uniform with the team.

“She was a fifth grader when the Lady Flyers went to state in 2015. She stayed at the team hotel for our three-year run at the state tournament, and couldn't wait to be part of the Lady Flyers program,” Lee Meadows said.

“This season has had its ups and downs. Between our team's COVID pause and a late season ankle injury, she hasn't played in a lot of games. But she is looking forward to experiencing the state tournament with her teammates.”

Donna McGohon loved UK football and was part of the Roadcats, a UK football RV club. Her son-in-law said she loved to sing and a deep faith in God, who gave her the “gift of hospitality” that she used often.

“My first experience at their house when I started dating my wife Cara was during a UK versus Louisville basketball game. I grew up a Louisville fan but she welcomed me anyway,” Meadows said.

“They were all eating on their UK blue trays and blue bowls, and she got me out a red tray and bowl. Louisville upset Kentucky that day, and she swore I would never get that red tray again. I actually would sneak it to games when the two were playing, and pull it out at the last minute. We had a fun, antagonistic relationship that I will truly miss.

“Her sudden passing left a void in all of us, but the memories will be with us forever. The state tournament cutout is just one more way we could honor a life well lived.”

Meadows knows he will likely look toward his mother-in-law’s cutout during the Lady Flyers' game hoping it “brings comfort to my father-in-law and wife” during the game.

“She is missed terribly. Sports have always been a huge part of our family and lately it has brought us some sense of comfort and normalcy. Ron (his father-in-law) told Lauren to go play in the district tournament the night after Donna had passed,” Meadows said. “Lauren went 3-for-4 from the 3-point line and finished with nine points. Her best game of the year. I don't think that was a coincidence.”