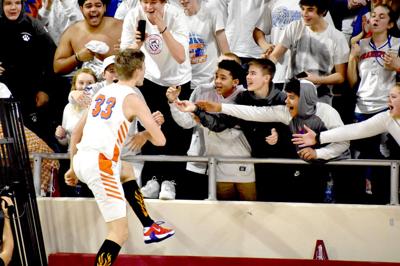 RICHMOND — The first quarter was shaky, the late fourth-quarter lead didn't last, and it turned out none of that mattered to Frankfort's boys basketball team.

The Panthers rallied for a 49-47 overtime victory over Murray Saturday night in the semifinals of the Kentucky All "A" Classic at Eastern Kentucky University.

FHS is making its first-ever appearance in the championship game Sunday at 2 p.m. against St. Henry, a 55-41 winner over Hazard in the second semifinal.

"Before the game started, I looked at our assistant coaches and said we looked nervous," FHS coach Chris O'Bryan said. "We made the decision before the game to mix it up on defense, start in a zone and then switch to man, just to get them thinking."

"We came out fired up and we wanted to get ours," FHS' Will O'Bryan said. "We were jacked up and didn't have our heads on straight."

That changed in the second half. Murray took an eight-point lead midway through the third quarter, but FHS cut the deficit to three, 29-26, by the time the quarter ended.

Frankfort took its first lead of the second half early in the fourth quarter and was ahead 36-33 with 4:31 left in the game.

A basket by Twombly and a three-point play by Chaz Austin put FHS ahead 41-39 with 21 seconds left in regulation, but a putback by Murray's Darius Duffy with four seconds remaining sent the game to overtime.

Murray struck first in the extra period, but the two teams traded baskets twice before another 3-point play by Austin put Frankfort ahead 48-45 with seven seconds left.

Two free throws by Murray's Hunter Utley pulled the Tigers within a point, 48-47, with three seconds remaining, and Will O'Bryan made a free throw with 1.4 seconds left to seal the win.

"When the other team scores late to send the game to overtime and then scores first in overtime, the odds are usually against you," coach O'Bryan said, "but we hit our free throws and got the stops when we needed them. These kids played so hard."

Twombly scored 13 of the Panthers' 16 first-half points, and he finished with a career-high 26 points despite giving up about an inch to Duffy in the post.

"He played good defense," Twombly said, "but I go against Delano Craig in practice, and that prepares me when teams play good defense."

It was offense that was the point of emphasis for the Panthers in the second half.

"At halftime we sat down and talked about our execution and what we needed to do on offense," O'Bryan said. "I couldn't complain about our defense. We only gave up 19 points in the half."

Austin finished with a double-double of 16 points and 12 rebounds. Duffy had 18 rebounds for the Tigers, and Utley led Murray with 12 points.

The Panthers take a six-game winning streak that began in the 11th Region All "A" Classic into Sunday's championship game.

FHS had lost nine straight before the regional All "A" tournament began.

"We always knew we could do this," Twombly said. "We had to put in the pieces that fit."