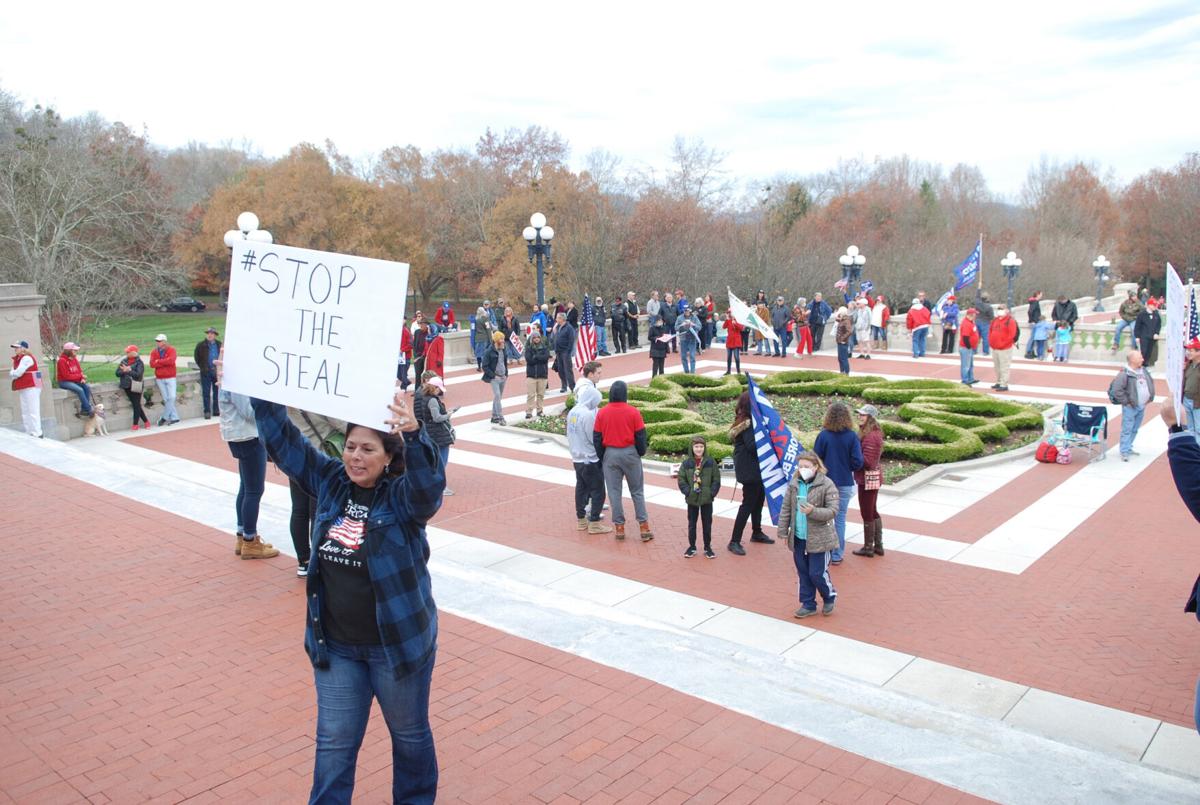 Eleanor Griffin holds a sign in front of a crowd of about 200 people Saturday outside the Kentucky Capitol. The group gathered to protest the presidential election. (Photo by Fred Petke) 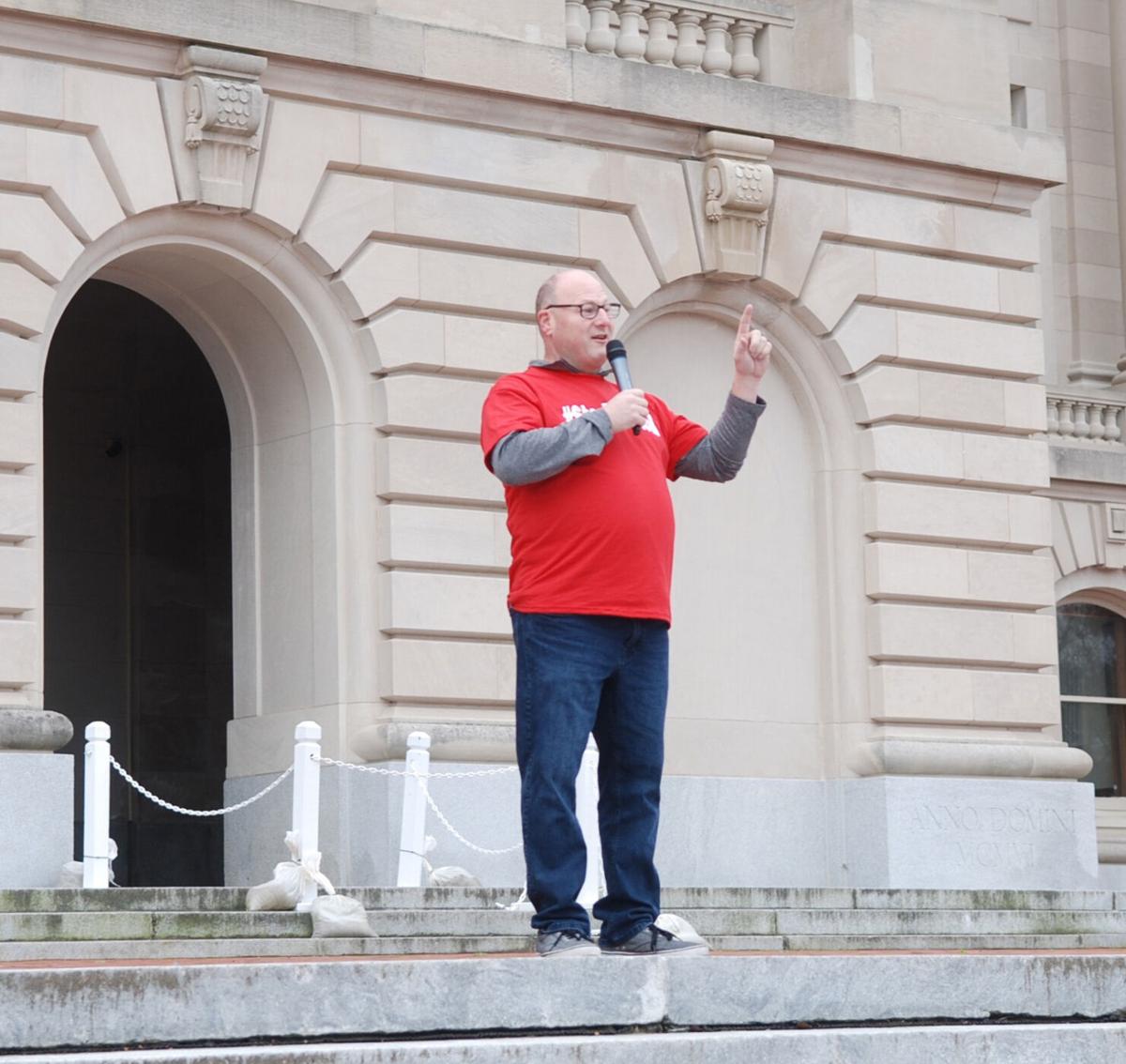 Event organizer and emcee Vincent Palazzo welcomes the crowd to Saturday's rally in front of the Kentucky Capitol. (Photo by Fred Petke) 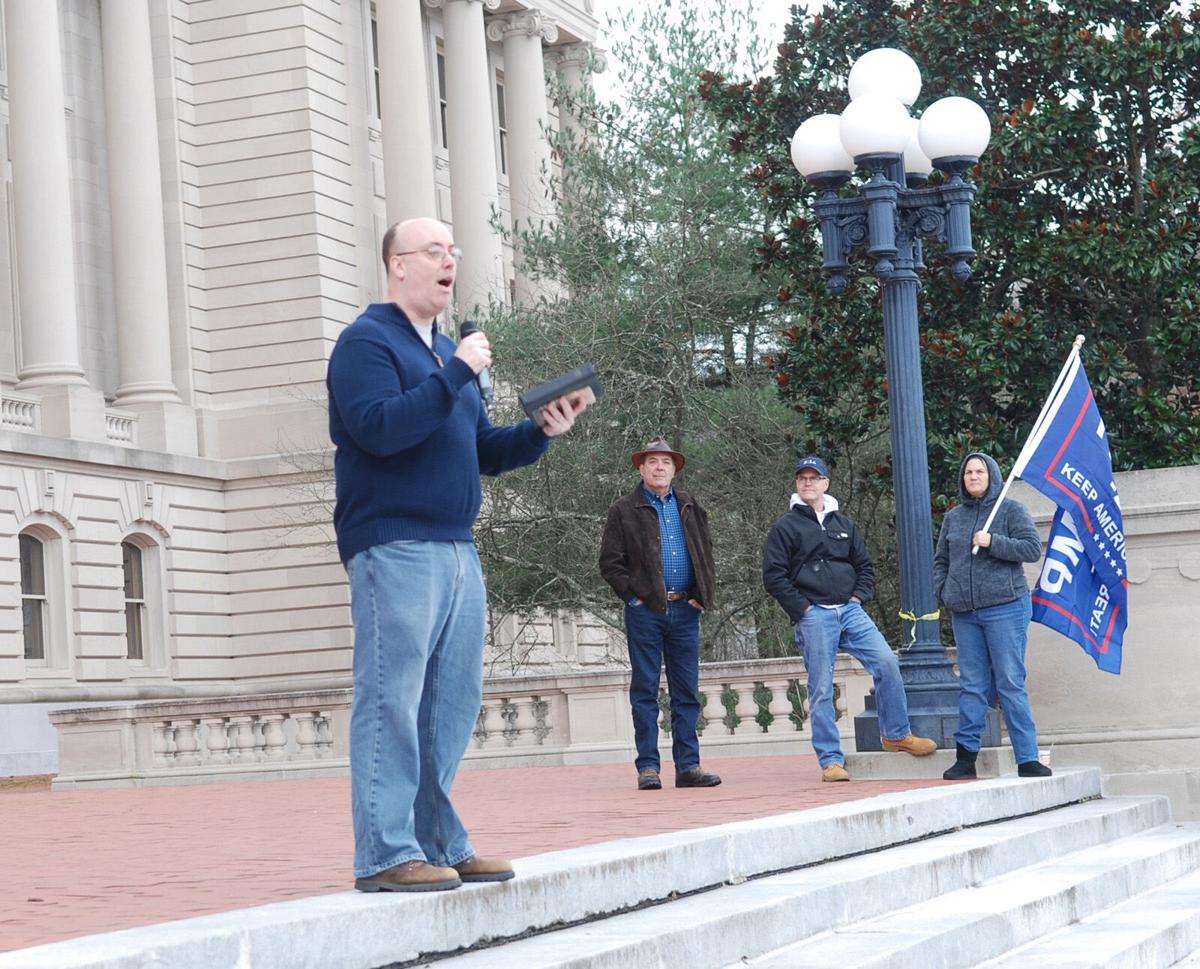 Kentucky Capital Chaplain Lee Watts speaks to the crowd Saturday at a Stop the Steal rally in front of the state capitol. (Photo by Fred Petke) 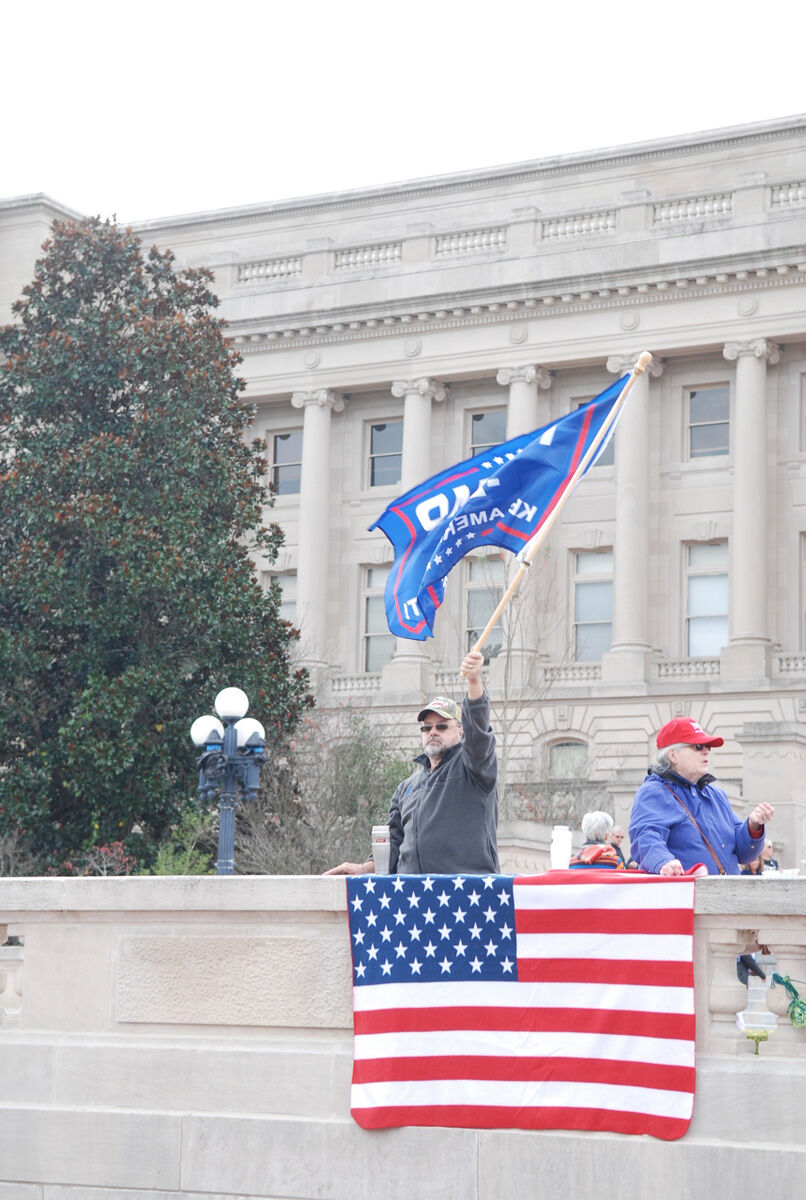 Gene Courtney of Louisville waves a Trump flag in front of the Kentucky Capitol Saturday morning. (Photo by Fred Petke)

Eleanor Griffin holds a sign in front of a crowd of about 200 people Saturday outside the Kentucky Capitol. The group gathered to protest the presidential election. (Photo by Fred Petke)

Event organizer and emcee Vincent Palazzo welcomes the crowd to Saturday's rally in front of the Kentucky Capitol. (Photo by Fred Petke)

Kentucky Capital Chaplain Lee Watts speaks to the crowd Saturday at a Stop the Steal rally in front of the state capitol. (Photo by Fred Petke)

Gene Courtney of Louisville waves a Trump flag in front of the Kentucky Capitol Saturday morning. (Photo by Fred Petke)

This story was updated at 5 p.m. to correct a quote and attribution, and to clarify Watts' status at the capitol.

One vehicle rolled up to the Kentucky Capitol Saturday morning with Lee Greenwood’s “God Bless the USA” blasting from its stereo.

American and Trump flags flew side by side as about 200 people gathered for a “Stop the Steal” rally to protest the results of the presidential election, in which Joe Biden was projected as the winner against President Donald Trump.

Trump himself has maintained there is widespread fraud in the election, and that theme was throughout Saturday’s rally from a half-dozen speakers.

“This is a hostile takeover of our nation,” self-described capitol chaplain Dr. Lee Watts said. “We can not permit that. We are Americans and we do not accept this. Donald Trump won the election and I think (former governor) Matt Bevin did too.”

Watts is not a state employee. In previous published reports, Watts said he was sent to minister to the capitol by a number of churches.

Organizer Vincent Palazzo said Saturday’s rally was the second, following one the previous Saturday. Another is being planned for next Saturday as well.

“Like so many people said, we are not a minority,” Palazzo said. “The media is silent about the majority. Anyone with a brain can see the masses support Trump and that they’re trying to steal the election.”

Trump and others have challenged the results of this year’s election which, in response to the COVID-19 pandemic, has relied heavily on mail-in voting.

“We know Trump did win … but the media is hiding it from us,” said speaker Michael Wolf.

Others are questioning the legitimacy of the election, though election officials across the nation have said there is no evidence of election fraud.

“What happens when Americans do not trust an election?” speaker Brenton Craggs said. “I fear we know the answer to this."

“I stand for Trump, I stand for America, I stand for you having the rights of the Second Amendment,” Patten said. “We has Christians, Americans, should stand together because if we don’t, we’re going to lose. God is on control no matter what happens.”

Members of the crowd came from Louisville, London, Covington, Georgetown and other communities around the state.

“We got a few waves and a couple honks,” Georgetown resident Elanor Griffin said of her drive to Frankfort Saturday morning. "I don’t think I got any fingers.”

Was this the "Biggest MAGA March ever.PERIOD!" ?

The "capital chaplain?" If that is a paying state job, the man needs to be fired!

And I sure don't see anywhere near 200 people, so that seems like an exaggerated number of fanatics. I don't think these nuts need any encouragement or inflation of their numbers from the State-Journal!

And not a person of color in the mix of this group. Anybody get why that is a very telling issue about the views of this group? Sort of like a bunch of klansmen without their robes.

And now you are in charge of what others should think! After all that’s you goal. Right?

We just wish right wingers would instead of being told by their master what to be outraged about "this week".

You can “think” anything that you want, Gayle, nobody can change that even with the facts, but that’s not really what is at issue here, is it?

As a lifelong law enforcement officer, surely you understand that in the court of law it’s proof that matters, not tweets, conspiracy theories, lies and all of the other chaff that you and these rubes keep throwing up in the air. Right?

Cecilia - so many little children standing among those fanatics! That sad that they will think that’s normal- but not all will! If they have the intelligence, will see that what those did and say that they grew up around- was wrong.

Really, they were all “little children“, it’s just that some head adult bodies. They all exhibited childlike naïvete’, rubes following Trump’s Cult of Personality! Let’s get this straight, not a single court challenge to election read regular irregularities has succeeded, and now, not a single reputable law firm is willing to take this rubbish to court, for fear of sanctions by the court for frivolous lawsuits. these Trump trains are interesting, because they feature men with long guns riding around in the back of pick them up trucks, with flags flying… Just like Isis or Al-Qaeda! That is extremely towing, since what they’re wanting is a corporatist theocracy based on Christian model of sharia law.

This frankfort gathering of the Trump worshipers look a little to pudgy to pack heavy guns very long!

Is the capital Chaplin a state employee? Or a volunteer?

"This is a hostile takeoveror our nation,” Capital chaplain Lee Watts said. “We can not permit that. We are Americans and we do not accept this. Donald Trump won the election and I think (former governor) Matt Bevin did too.”

Isn’t that a twisted, white supremest type of “creedism” that Humpty Trumpty has manifested, Then on the other hand , these people would have followed anyone that was xenophobic or racist or white supremist seeking autocratic rule by telling lies to gain their support. We can’t blame it all on Humpty Trumpty. The rot in our society goes deeper than that , even after you whittle away Trump from that rotten parts.

Trump is really just a symptom of the problem, as it’s his enabler‘s like Mitch McConnell, Lindsey Graham, and the rest of the sycophants, that enable him. It’s important to listen to what these people said when Trump was just running as a candidate against all of the other Republicans, because that’s what they really think of Trump.

The good chaplain is only parroting what the president has been saying. I blame Mr Trump first. Sadly most Republican elected officials continue to support the president's dangerous conspiracy theories.

It's way past time for these elected officials to stand up and denounce the president's malarkey. I am glad that some elected Republican officials are calling for a smooth transition.

We mustn't forget that top election officials in the United States said this was the cleanest election ever.

It is time for Mr McConnell to speak up and stop playing politics.

As a farmer I’d compare out society to locust fence post. Looking at the trees your going to harvest for fence post , they all look the same - until you cut them and then you’ll see the punk wood in the center of some . It’s the pithy rotten part in the core of the post ( caused by fungi)and if used as a post in the ground , it’ll not last many years holding up a fence. You’ll have to replace it with a good solid post with no rot or punk in the center . It will stand for many years and support any fence attached to it. Our society certainly has a lot of “ punk wood in it”

Lots of people are saying that the moon is made of green cheese!

I’m a little green around the gills thinking of green cheese! - but I’m just a green horn about cheese’s. Grass always looks greener on the other side of the fence! My son when very young was told he had a green thumb - he inspected both of his thumbs , closely! I never was ever green with envy of others! I always felt as if I had the green light to do as I pleased! We should al be going green for our environment! Let’s see - I’ve heard old folks say green as poison......