The State Journal’s appeal to the Attorney General’s Office for the release of an outside law firm's report pertaining to allegations of sexual harassment against a former Franklin County Regional Jail chief deputy was denied last week.

The newspaper questioned whether Franklin County Attorney Rick Sparks properly withheld some of the findings of the criminal investigation, which found evidence of sexual misconduct by then-FCRJ Chief Deputy Kelly Rouse.

On Sept. 14, more than a month after The State Journal filed an open records request for the report, the county attorney released a heavily redacted copy of the document compiled by attorneys Katherine Coleman and Scott Miller, of Lexington-based Sturgill, Turner, Barker & Maloney. The law firm's report was sent to his office on June 28, 2018.

The AG’s office ruled that Sparks did not violate the Open Records Act by denying The State Journal an unredacted copy of the investigation, which cost the county more than $14,000.

“Franklin County Attorney properly withheld criminal investigation record under prosecutors’ exemption, but initially failed to provide a detailed explanation as to the basis for withholding the record,” the AG's office wrote.

KRS 61.787 states that county attorney records pertaining to criminal investigations or potential litigation are exempt from disclosure and remain exempt after enforcement action is completed or a decision to not take action has been made.

“I did the best to release what I can while preserving the records of my office,” Sparks said previously. 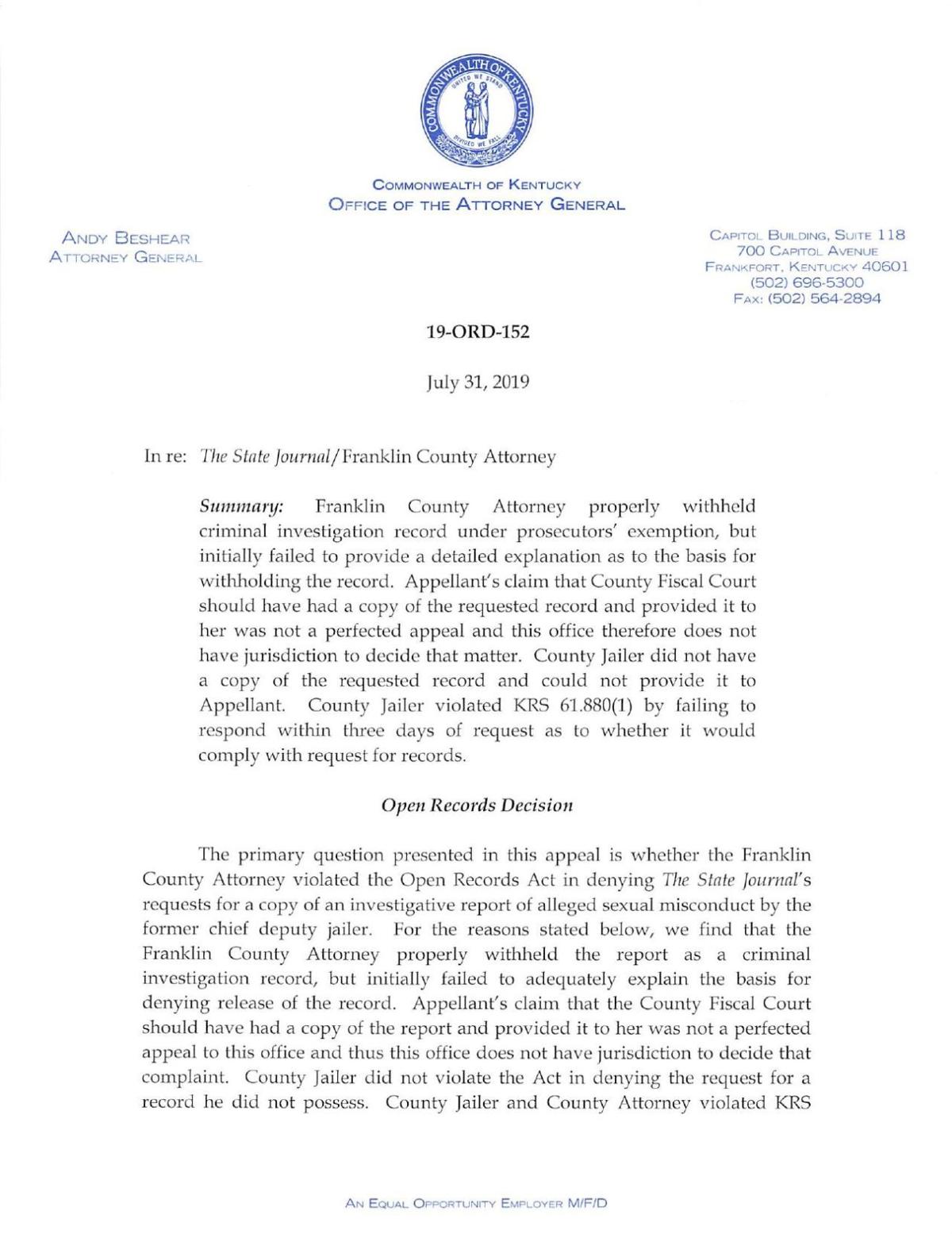 “This decision permits public agencies against which allegations of wrongdoing have been made (sexual harassment/misappropriation of public funds/etc.) to operate in secrecy,” she said.

“We will never know how serious the charges were, whether a thorough investigation was conducted, whether the discipline imposed, or here not imposed, was equivalent to the seriousness of the allegations and whether the facts borne out by the investigation supported final action,” she added.

The allegations against Rouse rose on May 17, 2018, when Jailer Rick Rogers notified his second in command by letter that he was being placed on paid suspension pending the outcome of the private investigators’ review of the claims.

While many details of the findings were redacted, the report stated that employees at the jail described Rouse as “intimidating” and that he was found to have participated in misconduct.

According to the FCRJ’s policy and procedure manual (chapter 3, pages 16 and 17), which Rogers referenced in Rouse’s May 17, 2018, suspension letter, sexual harassment is defined as “inappropriate sexual advances and requests for sexual favors.”

At the time, the jail employed 15 female deputy jailers and three contract nurses.

No criminal charges were brought against Rouse and the report concluded that there was insufficient evidence to determine whether his behavior violated the jail’s fraternization policy, which prohibits relationships in the workplace.

There was also not evidence to confirm or deny the existence of any relationship, consensual or otherwise, between Rouse and any female subordinate, according to the report.

The AG’s opinion found that the jailer and county attorney violated the Open Records Act by failing to respond within three days after the newspaper filed a request for the investigative file on Aug. 30. The AG’s office cited 16ORD-230, which reminds “that the procedural requirements of the Open Records Act ‘are not mere formalities, but are an essential part of the prompt and orderly processing of an open records request.”

The State Journal on Wednesday sent a renewed request seeking the investigators' report from Franklin County Fiscal Court or departments other than the county attorney, to whom the exemption cited by the AG's office specifically applies.

Sparks, who notified the newspaper of receipt of the open records request on Thursday, said a response will be sent the first part to middle of next week.

“Everybody is on deck and pulling records anybody ever touched outside my office,” he said.

State Journal Publisher Steve Stewart said the newspaper looks forward to the county's response to the latest request. The SJ has 30 days to appeal last week's opinion by the attorney general to Franklin County Circuit Court.

"We continue to believe that the requested document is of interest to the taxpayers who funded the investigation and who fund the public pension of the disgraced chief deputy who was allowed to retire without consequence," Stewart said. "We will pursue it vigorously."

Fully recovered, Dontaie Allen was at full speed down stretch

How does your family plan to spend the stimulus check coming from the federal government in response to the coronavirus epidemic?