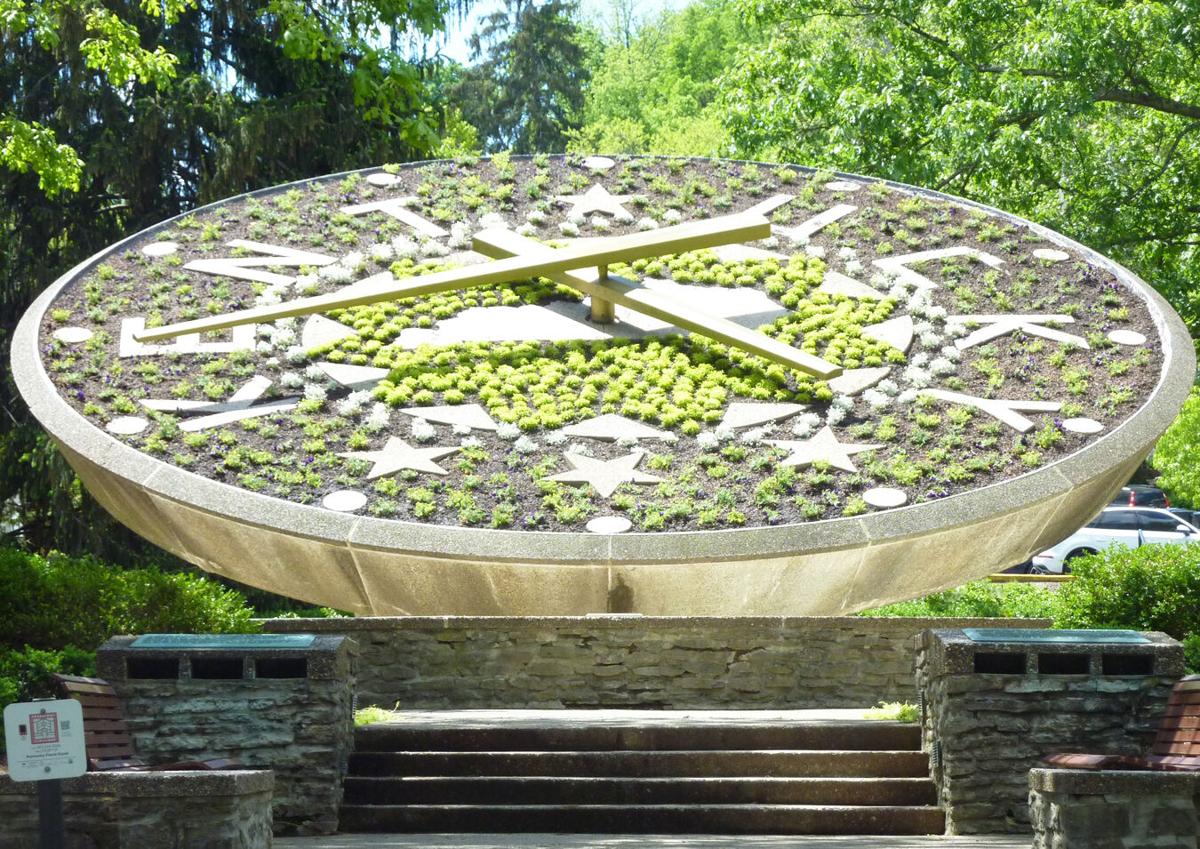 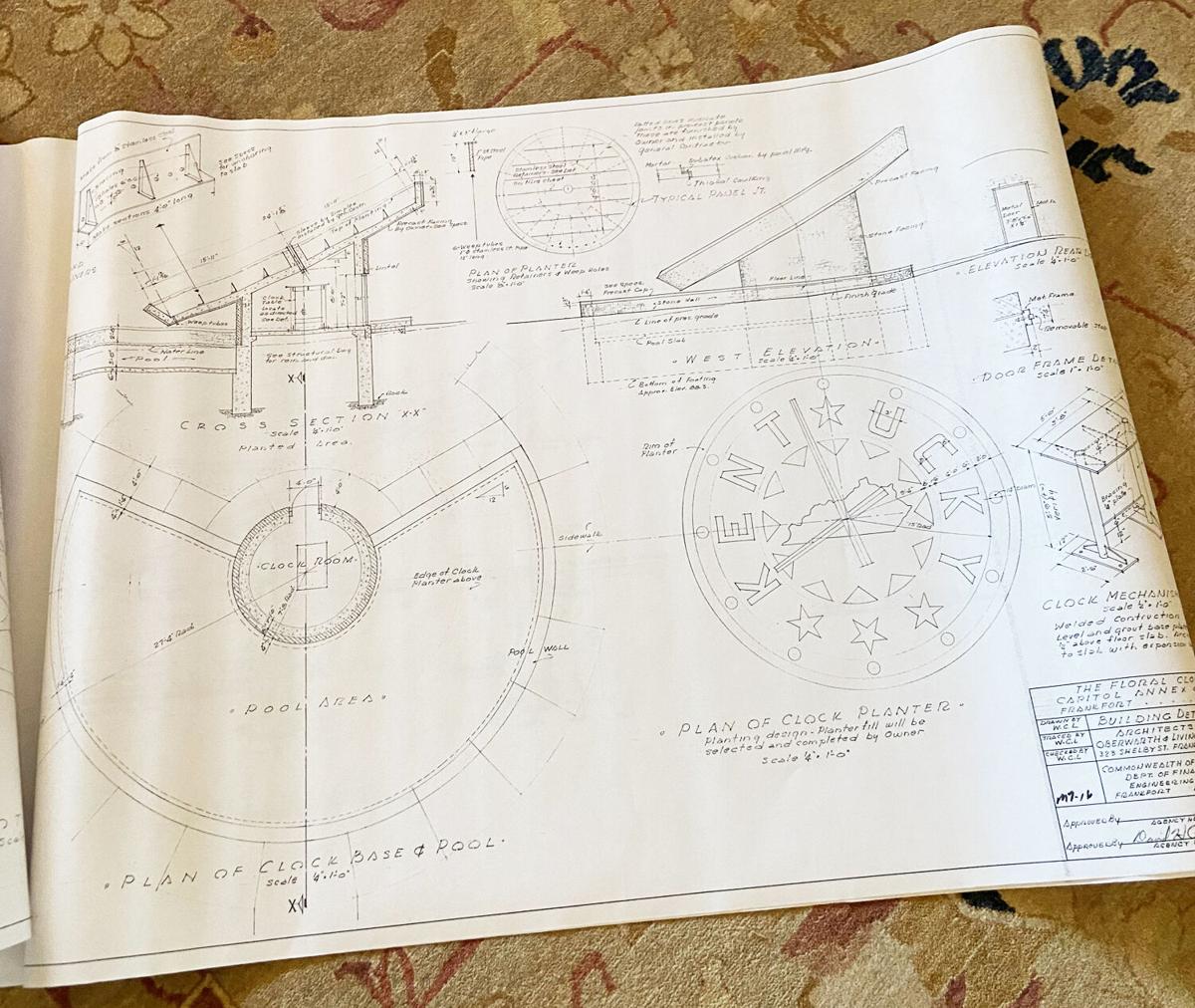 Ann Livingston Wainscott shared a photo of the original plans for the floral clock. Her father William C. Livingston Jr was the architect of the project. (Photo submitted) 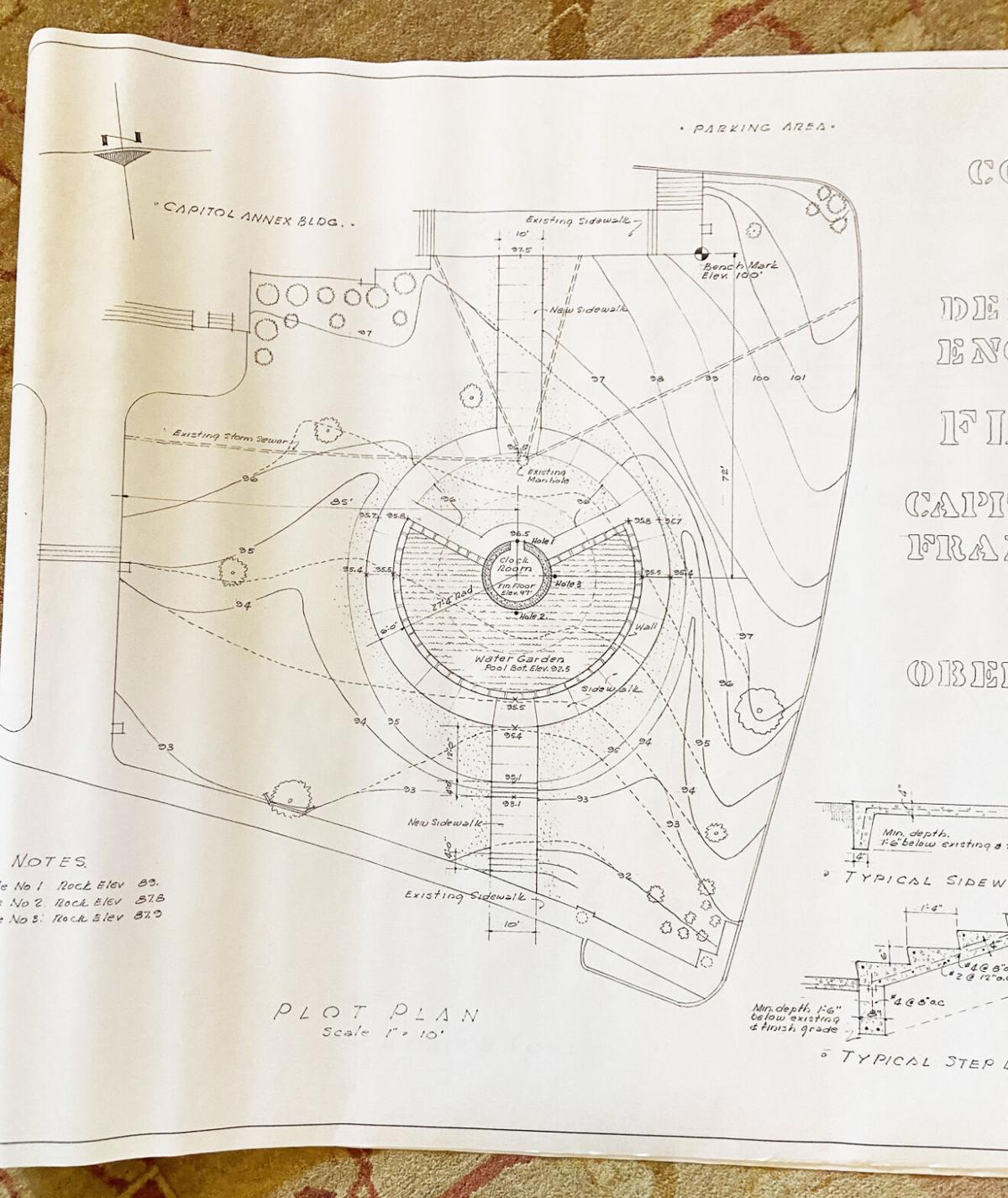 Editor's note: This story was updated at 11:34 a.m. on May 17 to include information about the local architect of the floral clock.

It has ticked more than 31 million minutes since it was installed and this month the Capitol Floral Clock turns 60 years old.

Then-Gov. Bert T. Combs dedicated the unique attraction in May 1961.

But the idea for the giant clock was that of Frankfort resident Ken Dotson, the state’s first landscape branch manager, who had seen a smaller floral clock in Scotland while serving in the military.

“One day we (Dotson and Combs) were just talking and he said: ‘I want to get people to come here. I want you to put something in they can see that will make them come back,’” Dotson said in a 2011 interview conducted by the Kentucky Oral History Commission of the Kentucky Historical Society.

“Just out of the clear blue I said, ‘I saw a floral clock in Scotland,’ but he kind of looked at me funny and never said anything. That fall, he called me over to his office and said, ‘I saw one of those floral clocks.’ He said: ‘Go out to the airport, go up to Niagara Falls and look at it, and come back. We’re going to build it.’ That’s it. That’s how it started.”

Combs appropriated $50,000 from the governor’s contingency fund to pay for the clock’s construction. Frankfort architect William C. Livingston Jr. was commissioned by the governor to both design and oversee the project.

Livingston’s daughter, Ann Livingston Wainscott, who still has the original floral clock plans in her South Carolina home, shared a photo with The State Journal.

The Capitol Floral Clock is one-of-a-kind. The clock face, a concrete planter that holds 100 tons of dirt and flowers, has the word “Kentucky” spelled around it and measures 34 feet in width.

The minute hand is 20 feet long and the hour hand is 15 feet. Both weigh roughly 500 pounds.

In addition to the word “Kentucky,” the face of the clock is adorned with stars and more than 10,000 flowers and plants — in particular begonias and Joseph’s coat — during the warmer months. The greenery is grown in state-owned greenhouses.

In 2011, a plaque in honor of Livingston’s contribution to the project was dedicated near the floral clock during the 50th anniversary celebration. The clock’s hour and minute hands were also painted gold for the occasion.

“Having grown up in Frankfort, this was a special event for my brother (W. Livingston III) and all of our extended family,” Livingston Wainscott said, adding that her father was the architect of one of the most unique tourist attractions in the world

Combs took flak from political opponents — in particular A.B. “Happy” Chandler during the 1963 gubernatorial campaign — for the floral clock’s construction.

“Well, they don’t say it’s half past 2 in Frankfort anymore,” Chandler, who lost his bid for an unprecedented third term as governor, declared. “They say it’s two petunias past the jimson weed.”

The floral clock’s giant planter is suspended above a pool of water that measures 36 feet wide and 4½ feet in depth. Many visitors throw coins into the pool. The money is collected every three weeks and used for charitable purposes, including to fund scholarships and purchase recreational equipment for children in state child care institutions.

The state earned a Bronze Seal Award from the National Council of State Garden Clubs in May 1962 for beautification efforts at the Capitol just a year after the floral clock’s unveiling.

In 2002, the clock was featured on HGTV’s series “Great American Gardens.”

Unfortunately, Dotson didn’t get to see the clock reach its 60th anniversary. He passed away at his Frankfort home on Feb. 3, at the age of 88.

But he and Livingston are credited with constructing one of the most talked-about tourist attractions in Frankfort.

I knew Mr. Dotson and Governor Combs was one of my favorite Governors. I am so glad they proceeded with this clock project. It is a beautiful addition to our beautiful State Capitol. I often walk around the Capitol and always look at or walk over to the clock to see it. I grew up in South Frankfort and the Capitol grounds and clock were our playground. We were lucky kids. Love it.

When Mr. Dotson was in charge, the clock was the jewel in the Capitol landscaping scheme. They made a real big deal out of the governor’s derby breakfast back then, with movie stars and heads of state attending. It was invitation only, but us common folks would go down For the spectacle including the beauty of the floral arrangements in front and maybe catch a glimpse of somebody famous occasionally. At that time, they kept goldfish stocked in the water beneath the clock, and of course, some drunk teenagers would get in every now and then and chase them around. We...er ah, they never meant no harm! Trying to have a little fun.