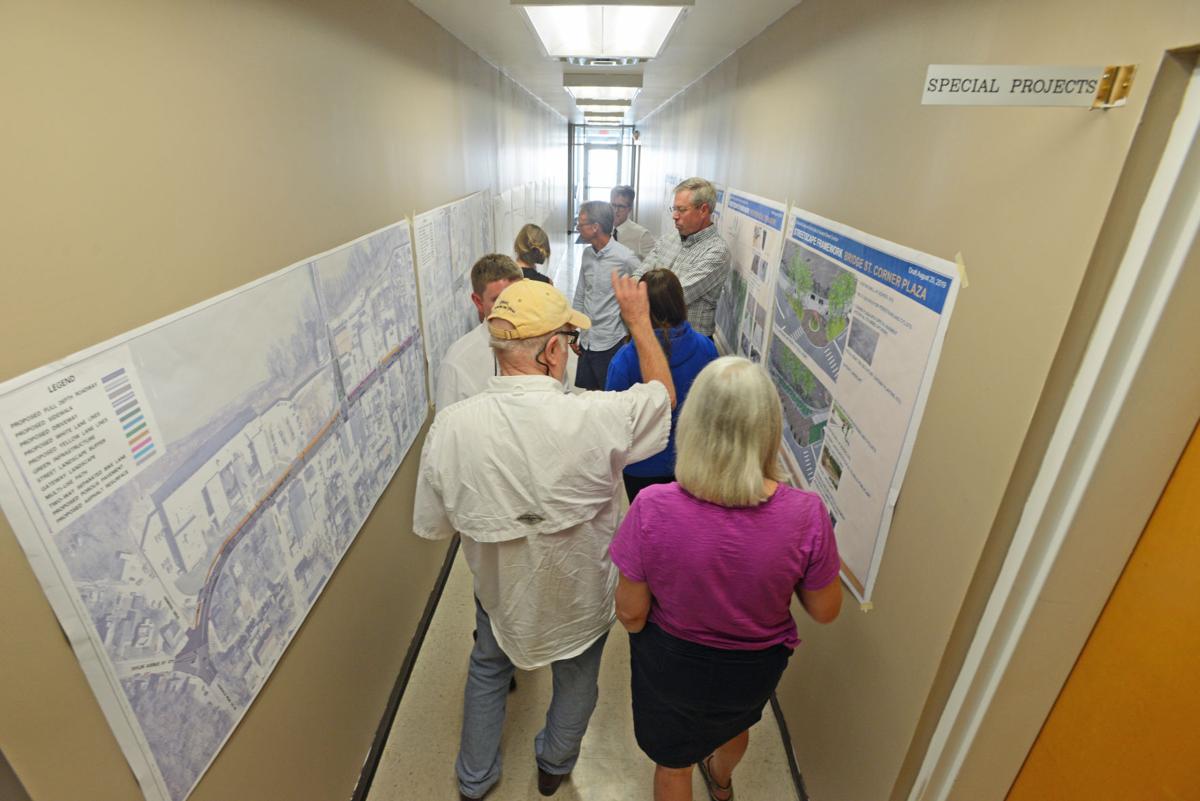 Residents and stakeholders look Thursday night at the preliminary designs of the TIGER grant project. Zack McDonald | The State Journal 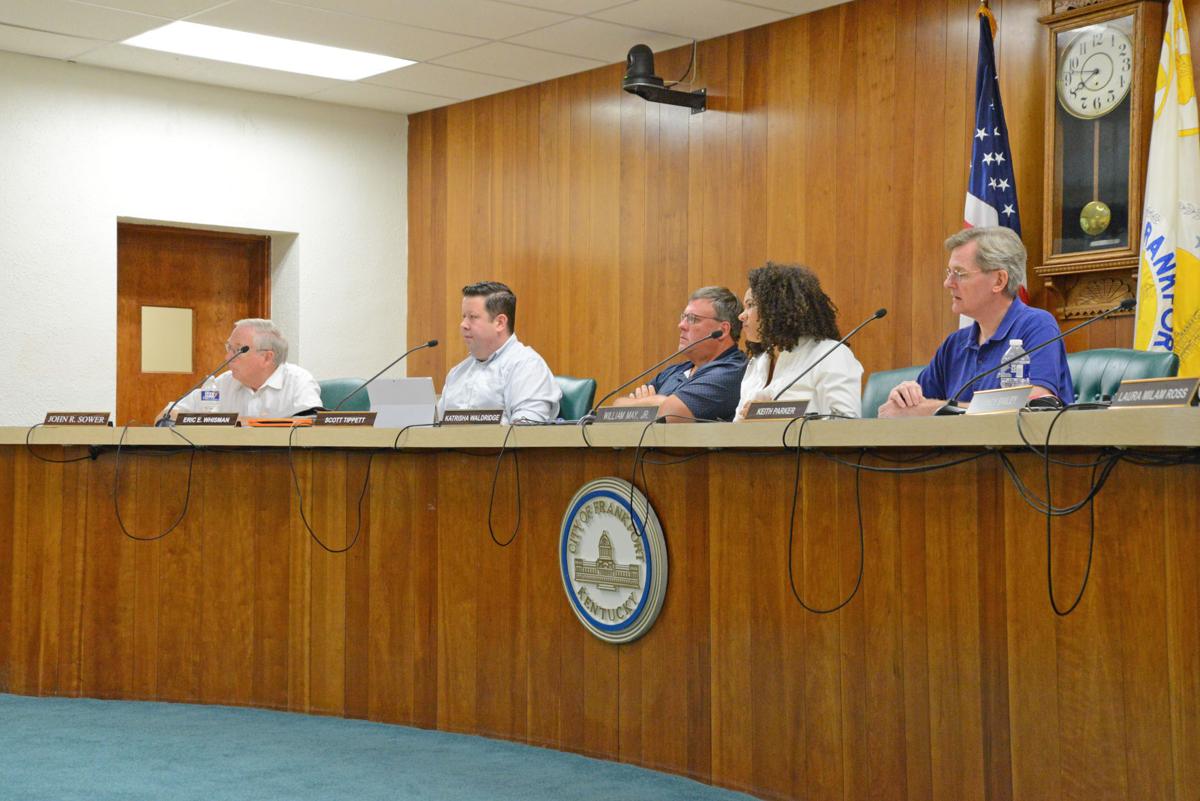 Commissioners listen Thursday to a presentation on the progress of the TIGER grant project. Zack McDonald | The State Journal 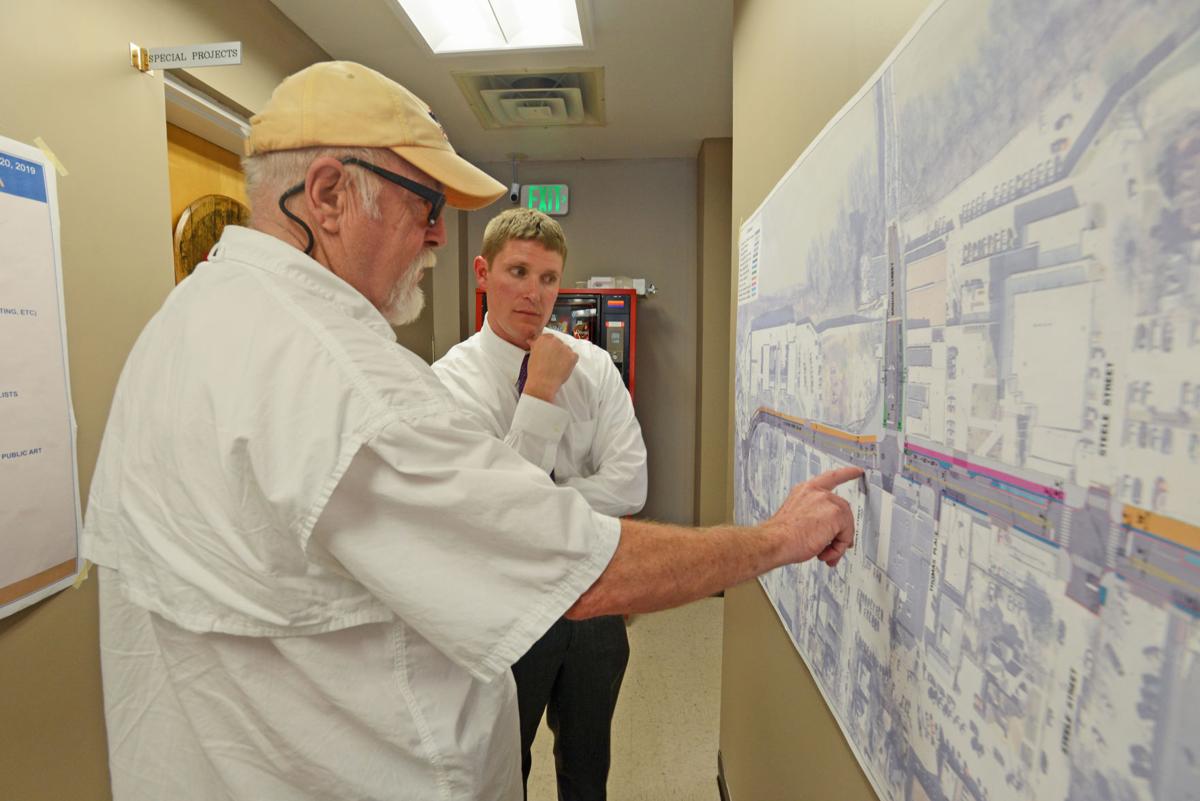 Residents and stakeholders look Thursday night at the preliminary designs of the TIGER grant project. Zack McDonald | The State Journal

Commissioners listen Thursday to a presentation on the progress of the TIGER grant project. Zack McDonald | The State Journal

Truck access, parking, public art and one property dispute arose during the first public hearing on preliminary plans for a $12 million overhaul of the roadway and streetscape of a major downtown corridor.

Frankfort city commissioners held a special meeting Thursday about the project, which is largely funded by a federal Transportation Investment Generating Economic Recovery (TIGER) grant. Officials heard a presentation from engineers STRAND Associates and the Kentucky Transportation Cabinet about the effects of the project on the Second Street corridor as well as praise and complaints from residents. The project will move forward with a final design slated for March, but other opportunities for public input will be available along the way.

The project is being funded by the almost $8 million grant from the U.S. Department of Transportation and a local contribution of $4.375 million, with a goal of boosting economic development along Second Street. Months of private meetings with stakeholders and a public open house have occurred since the city was awarded the federal grant.

However, at least one business owner felt like his concerns were ignored.

Joe Hancock, owner of Whitehead-Hancock Plumbing, Heating & Air Conditioning, told the commission that the project effectively would encroach about 5 feet onto his property. He said he was concerned that the city would end up taking a portion of his property to install a sidewalk without compensation or his consent.

“I don’t feel like the property owners were taken into account on a lot of this project,” Hancock said, adding that his business is about 130 years old. “… I know that two of the oldest businesses in Frankfort, our concerns were not addressed at all.”

City Manager Keith Parker said there has been a discrepancy on property lines, but the city has given consideration to Hancock’s concerns. He said the Transportation Cabinet will be performing a survey to determine where the property meets public right-of-way.

Brent Swigert, president of Walk-Bike Frankfort, praised the majority of aspects of the project. But he said there was one suggestion he provided at a May open house that went unheeded: roundabouts at intersections at Second Street/Capital Avenue and Capital Avenue/Main Street.

“If you look at traffic flow, (roundabouts) perform superior to any traffic signals out there,” Swigert said.

Chase Wright, project manager for STRAND Associates, said engineers looked at a cost-benefit analysis of roundabouts at each intersection, and each presented possible issues. He said they could also be beneficial to the intersections. But it could be a costly move to use the intersections for an experiment the city might have to reverse later on.

“There would be a question about who’s responsible if there is an issue,” Wright said.

Charles Booe, owner of Rebecca Ruth on Second Street, also had issues with the idea of roundabouts precluding delivery trucks from entering the area. He said that it would not only hurt his business but also prevent the likelihood of a replacement for the now-closed Pic-Pac grocery store.

“I think (roundabouts) would be a joke,” Booe said. “… I think if the city is interested in getting in a supermarket, we have to establish truck navigability with a loading dock.”

Houston Barber, Franklin Independent Schools’ superintendent, reiterated the district’s concerns about the removal of a center turning lane near Second Street School that would potentially cause traffic issues.

“If you haven’t seen arrival or dismissal over there, I invite you to come check it out,” Barber said. “The decision I’d like you to continue to review is a consideration of safety for vehicles and pedestrians.”

Mary Palumbo, owner of a row of buildings across the street from City Hall, aired concerns about parking. She said that many of her tenants park at a city-owned lot on nearby Conway Street. And the removal of a left turning lane to the street would cause issues with that.

Parker said the city would look into a solution and providing another City Hall parking lot as an alternative solution.

Some speakers praised broad aspects of the project.

Jeri Howell, a Frankfort resident and teacher at Frankfort High School, said that the project opened up several possibilities for public art — some of which could be contributed by the students of nearby Second Street School.

“Students will see their art come to life on the streets they walk every day,” Howell said.

The city did not address all the concerns put forth during the hearing. But there will be more time to hear complaints.

According to the TIGER grant page on the city’s website, a deadline of March is set for the final designs. The website also encourages people to check back for opportunities for community engagement.

“There’s going to be a lot more public input, but we have to have an ending point on this,” Parker said. “We’re not done with public comment. We’ll continue.”

McGrath takes on Booker and Broihier in only scheduled Democratic U.S. Senate debate