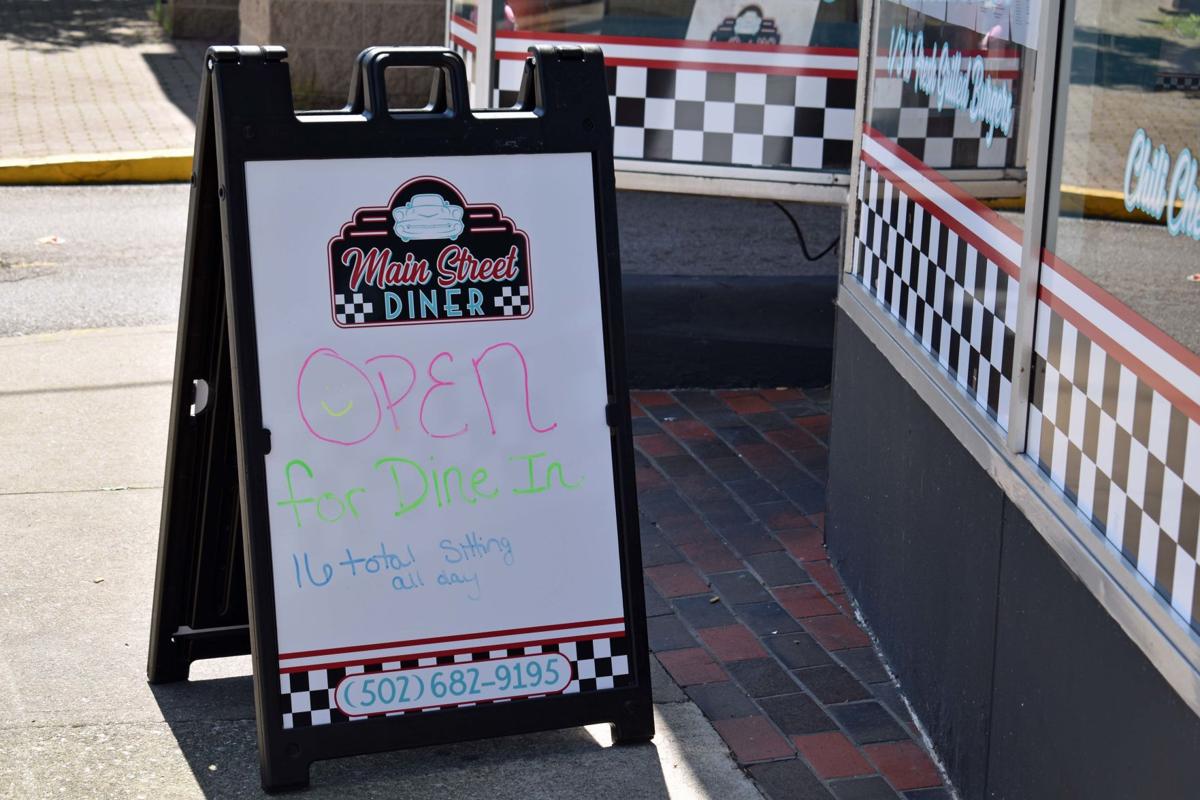 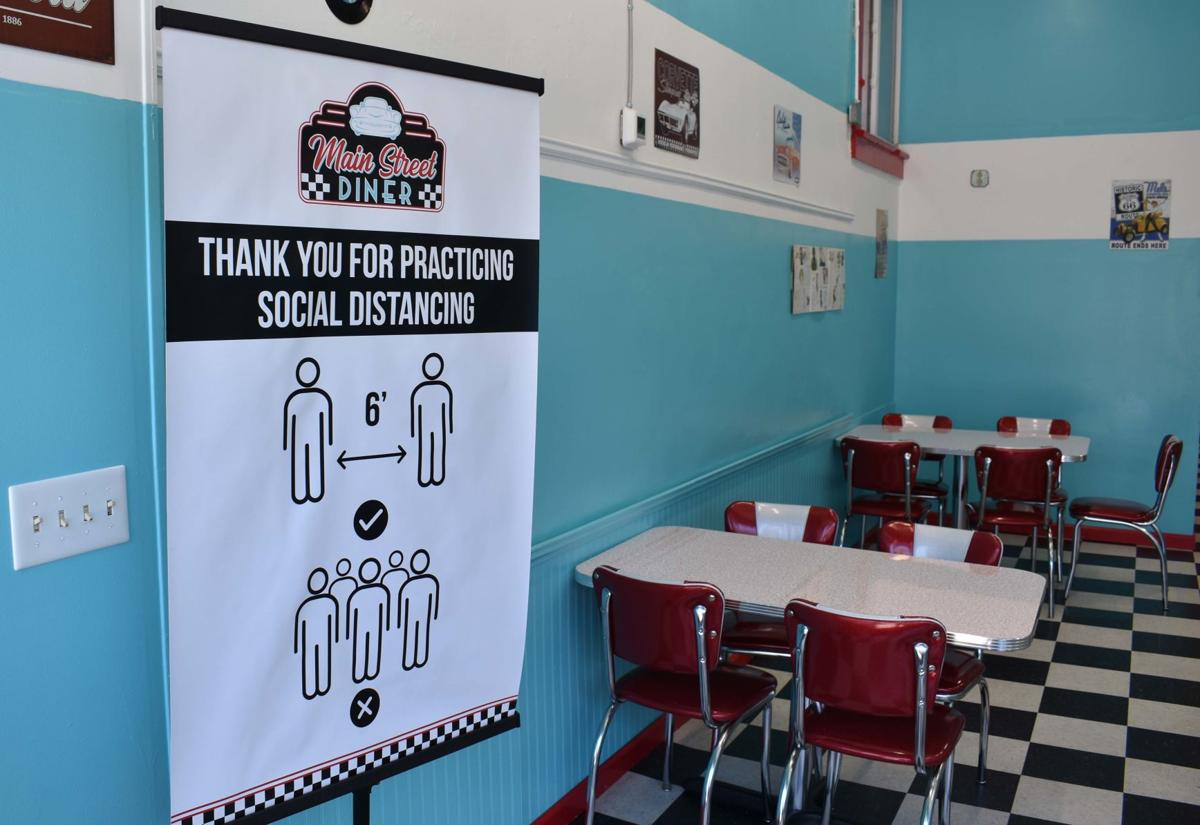 A sign at the front of Main Street Diner downtown reminds customers to remain six feet a part while inside the restaurant. The diner reopened its dining room at 33% capacity on Friday as part of the COVID-19 reopening guidelines set by the state. (Jordan Hensley/The State Journal) 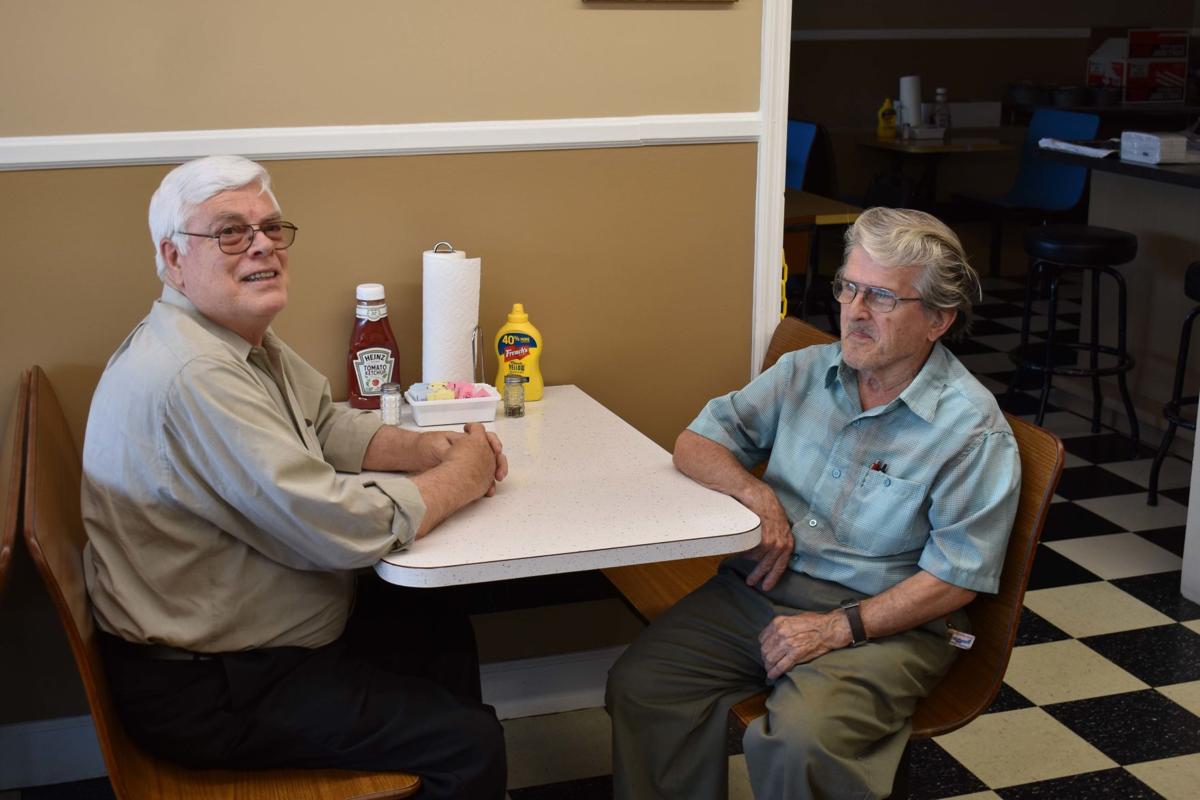 Paul Shelton, left, and Johnny Clark drove by several restaurants on Monday morning before landing on Marshall's Diner. Out of the places they wanted to eat breakfast, Marshall's Diner was the only one open. The restaurant reopened its dining room for the first time on Friday since the COVID-19 shutdown. (Jordan Hensley/The State Journal) 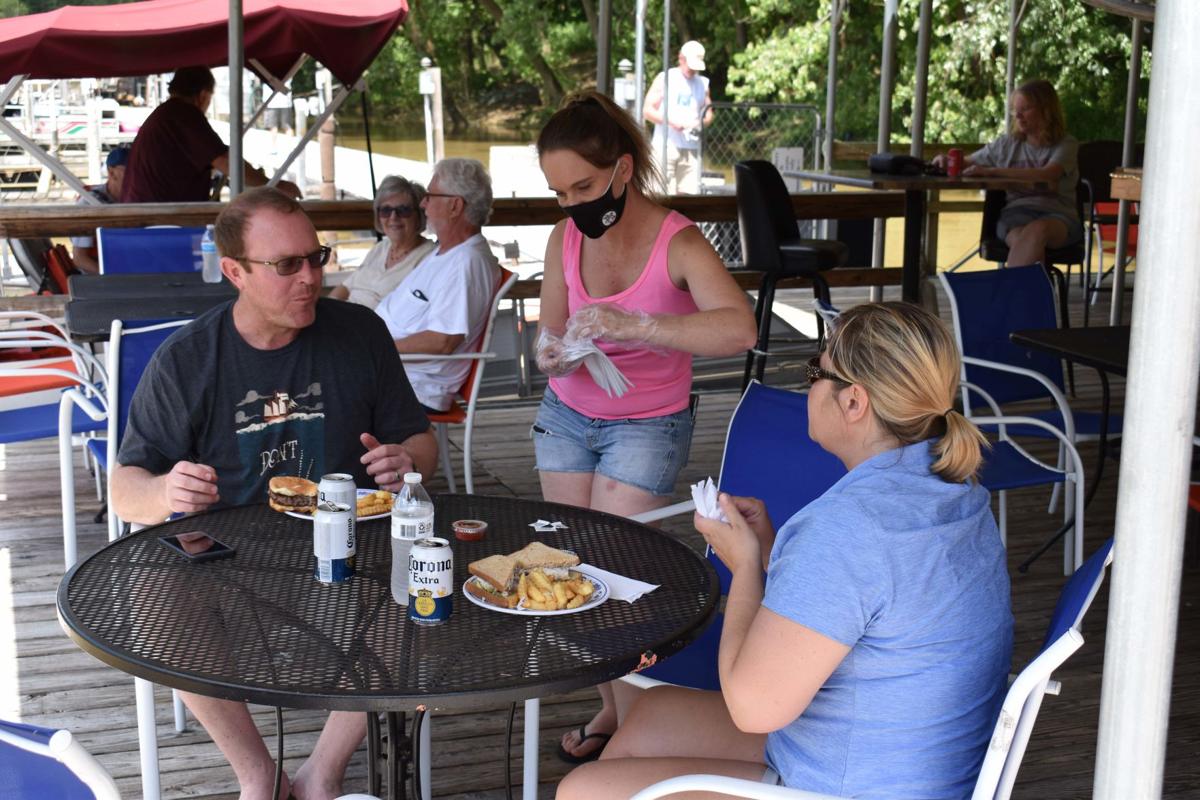 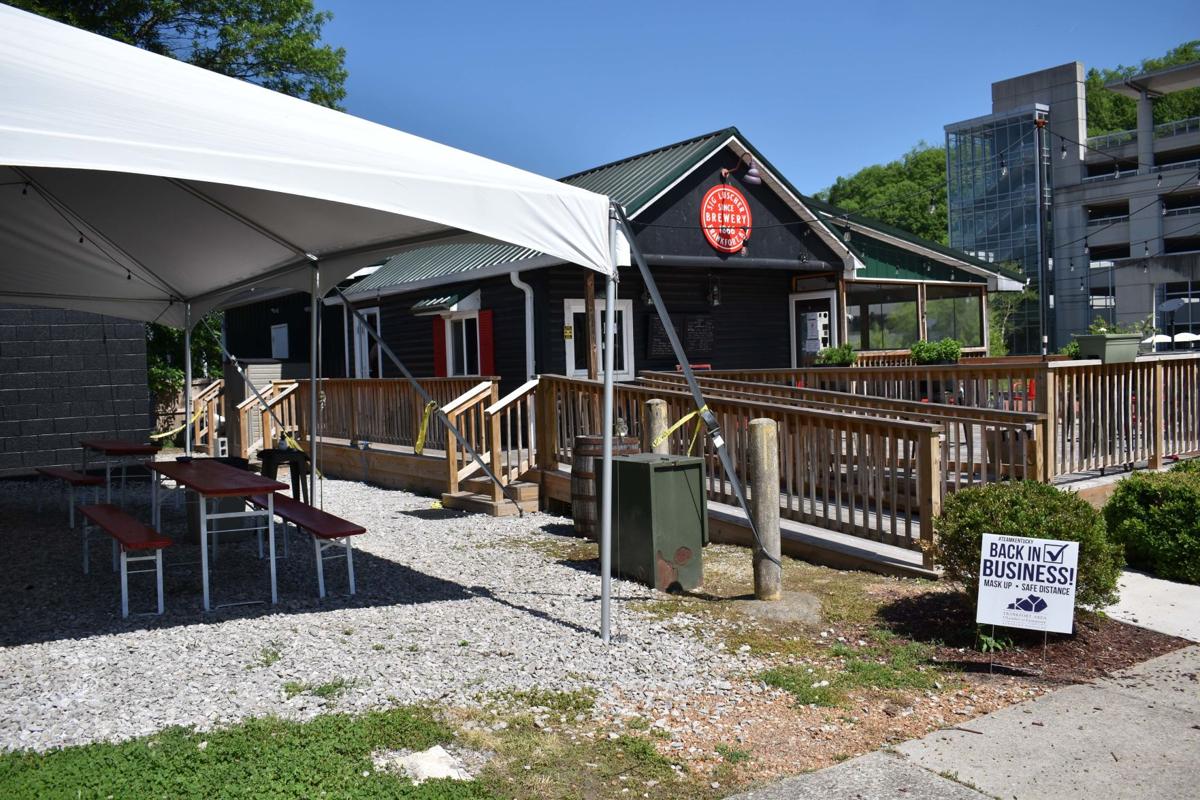 Sig Luscher Brewery owner Tim Luscher's plans to expand outdoor seating were already in the works when COVID-19 shut down the restaurant to everything but take out in March. Now, a large tent and picnic tables will help maintain social distancing guidelines due to COVID-19 and provide a cool area for patrons to eat. (Jordan Hensley/The State Journal)

Restaurants across the commonwealth were given the green light to reopen Friday, but with a few restrictions.

While some Frankfort restaurants chose to keep their dining rooms closed for now, many local eateries decided to reopen to indoor and outdoor dining.

On Monday, Marshall’s Diner owner Elbert Bowman was the only person behind the counter and the grill. For now, he cannot afford to rehire any of the employees he laid off in March when Gov. Andy Beshear ordered restaurants to close except for carryout and delivery in an effort to slow and prevent the spread of COVID-19.

Throughout the restaurant shutdown, Bowman worked filling carryout orders during the day while working as a delivery driver for Pizza Hut at night.

Customers Paul Shelton and Johnny Clark became Bowman’s fifth table of the day at around 11 a.m. The pair had been driving around to all of their favorite stops to find a place to eat breakfast, but only Marshall’s Diner, on Reilly Road, had its dining room open.

At 33% capacity, Bowman said he can seat 35 people at most. To keep people spread out, some tables and chairs have been pushed together to divide the dining room in half.

A mile and a half away on Mero Street, Sig Luscher Brewery was also open for business. Owner Tim Luscher said he reopened the restaurant for on-site dining on Friday and business has been steady. Customers are encouraged to eat outdoors either on the picnic tables underneath a giant tent or at one of the other seating areas surrounding the building.

Customers are asked to wear masks when interacting with staff and vice versa. Hand sanitizer is available and tables and chairs are spaced out to keep everyone properly socially distanced.

A silver lining of the shutdown, Luscher said, was that it gave him some time to get some improvement projects completed.

In the heart of downtown, Main Street Diner and its sister restaurant, the Riverboat Grill, were also open.

Jacob Allan, a co-owner of both restaurants, said it was a difficult decision to reopen the diner’s dining room. Only 16 people can dine inside the restaurant at a time. Carryout orders during the shutdown have kept the business afloat, but the business has still struggled.

Tables are spaced out to maintain social distancing at both restaurants and employees are required to wear masks and gloves when interacting with customers or handling food.

Riverboat Grill, which is a seasonal restaurant on the Kentucky River, opened last week. The inside of the small restaurant is closed to customers for now, but the outdoor dining area is booming.

On Monday, the lunch crowd at the grill was strong.

Customers John and Kelle Flynn said they were excited to be back at the grill, which is one of their favorite spots in Frankfort.

One of the things that I miss most that COVID-19 has stolen from me, is eating out at our many and varied restaurants. I used to eat out on average one meal a day, with no junk, mind you, but good wholesome food.

I ate with friends and family, and I ate out by myself, which really never turned out that way, as there were always others eating around/with me, or waiting on me. I loved the company, and made a point on becoming friends with the owners and their crew. I appreciated their efforts, and was a generous tipper.

That has all changed now, as I fit into that dreaded age/health demographic, where the stats tell us that contracting this virus is much more likely to be a death sentence. You see, I am 69 and have heart disease. surviving a "widow maker" heart attack, and had a ischemic stroke. I have survived all of them with little outward effects, but a little voice inside of my head tells me that it all could be for naught if I get sloppy with this pandemic.

So, I am very careful about wearing my mask when I am out, maintaining social distancing , and disinfecting my hands. I no longer do any browse shopping, but instead, it is more like a military foray, where I have a list of needed items, I get in and obtain them and get out, cleaning my hands before and after. I really don't mind hunkering down out here in the country, as that was what I was used to doing anyway. I have plenty to do.

Because of Governor Beshear's quick and decisive action of shutting down the places which were most likely to be a breeding ground for COVID-19, Kentucky hasn't even suffered a first wave of the virus, as opposed to nearly all of the red states around us. Republicans, both on the federal level, and those controlling our neighboring states, have been in denial about this whole thing, and their populations have suffered mightily. They haven't been silent around here either, with their super majority Legislature and Republican judges taking formal legal action to negate Beshear's administrative orders over time. It is like they want people to die from this!

We have been cooking our own food and picking up (hot food only) takeout, always bringing it home, putting it on our own plates and then nuking it for a few seconds in the microwave, before eating it. That has worked so far.

When I am out, there seems to be a lot of people who are still treating this pandemic as some kind of joke, or as they say, a Democratic hoax. Where in the heck did they get that idea? TRUMP! These same people are currently holding armed demonstrations, which amounts to little more than a freak show, at the Capitol over the governor's actions that have successfully prevented a true pandemic in our state...yet! But with the reopening of society, that is sure to change, much like it has in Alabama.

But because they refuse to abide by a few simple rules in our "new normal", they make it impossible for me and others who are woke, to be able to enjoy eating out in our favorite restaurants. And that is a real bummer!

I really don't see it ever being like it was, as COVID-19 is but one of the wild viruses out there, some have already made the "jump" from animals to humans, and many more just bidding their time. It is not if, but when.

Wildlife (wet) markets around the world “stack the odds in favour” of viruses spreading from animals to humans, a UK scientist has said. They think it originated in bats, then passed to another domesticated animal which transferred it to humans. The inhumane way that we raise our food animals contributes heavily to this jump. There is serious debate whether those who have contracted this coronavirus builds up an immunity that prevents reinfection. That puts the development of an effective vaccine in serious doubt. The common cold is a coronavirus and nobody has developed a vaccine for it.

I’m glad your taking care of yourself and still around James! It’s inspiring to know folks like you and the SJ live in our community and are part of our society. Helps us be more civilized !

Thank you for your kind words. I find solace in your posts as well.