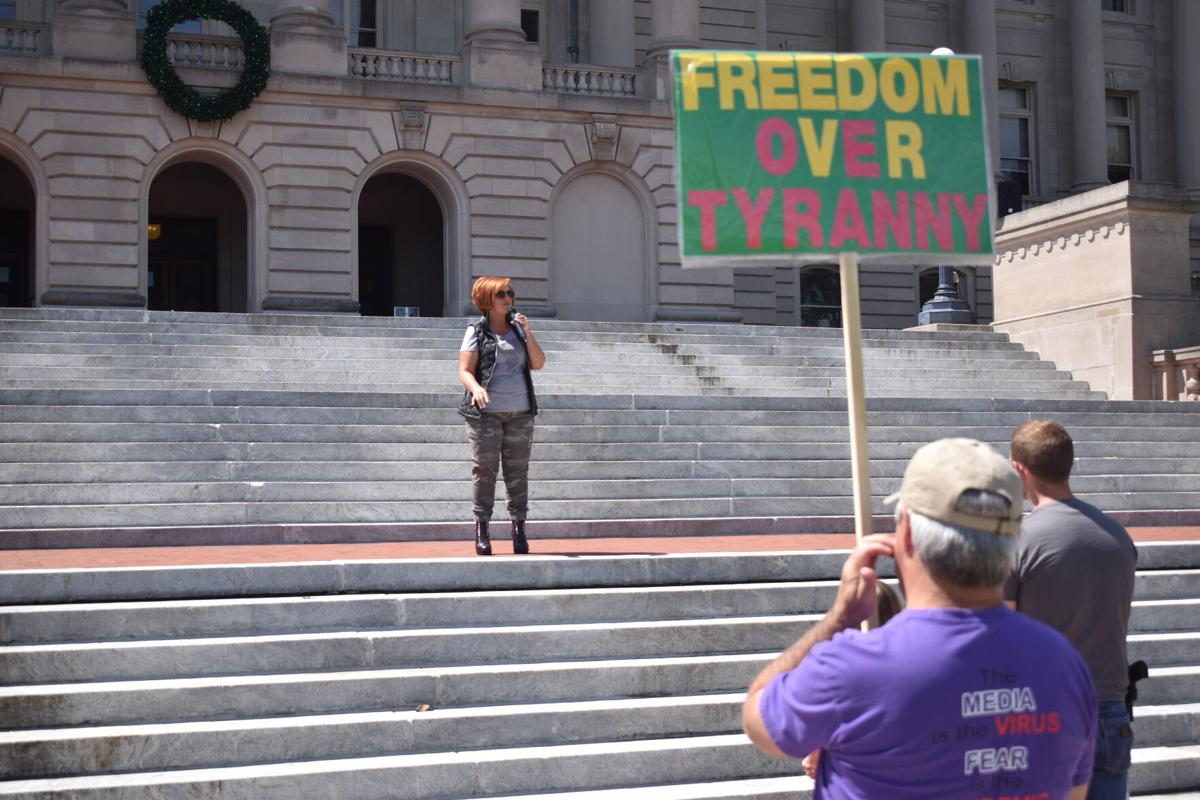 Kimberley Turner was one of several speakers at the "Unmask Kentucky" event on Saturday. (Austin Horn | The State Journal) 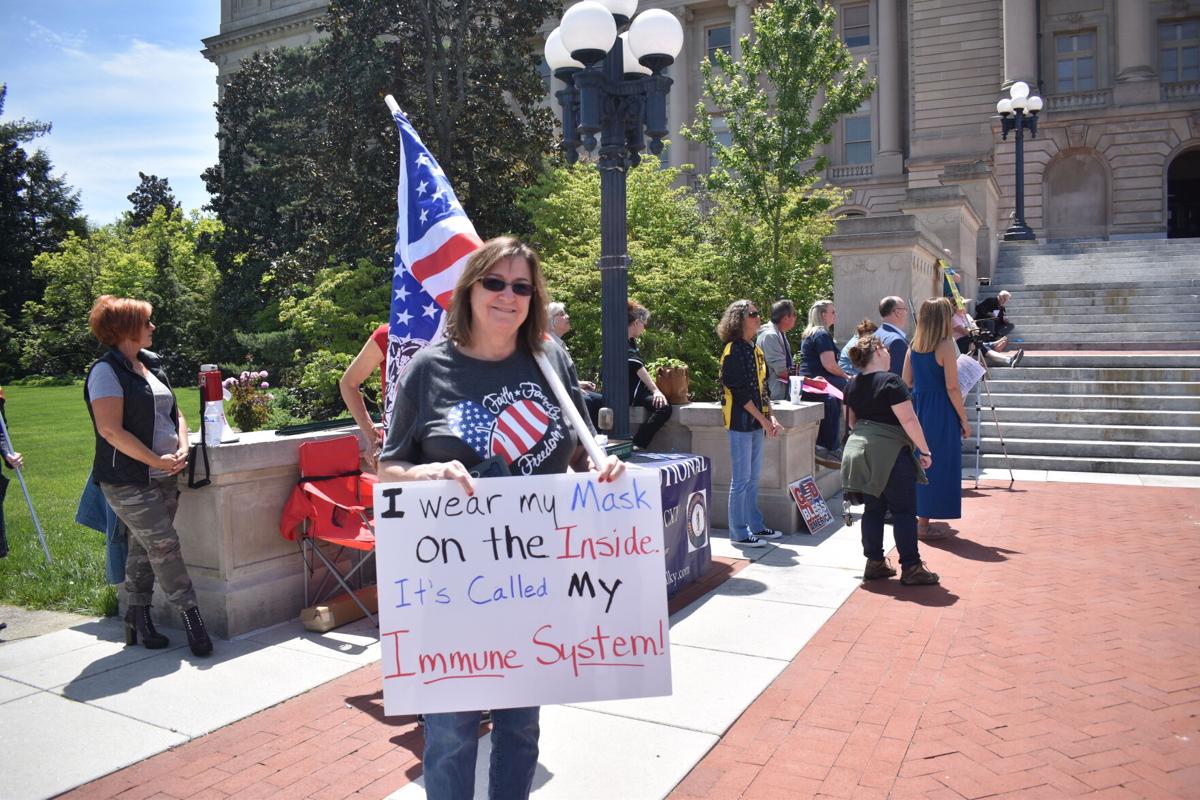 Kim Zimmerman has attended conservative pro-Trump rallies both in Frankfort and in Washington D.C. (Austin Horn | The State Journal) 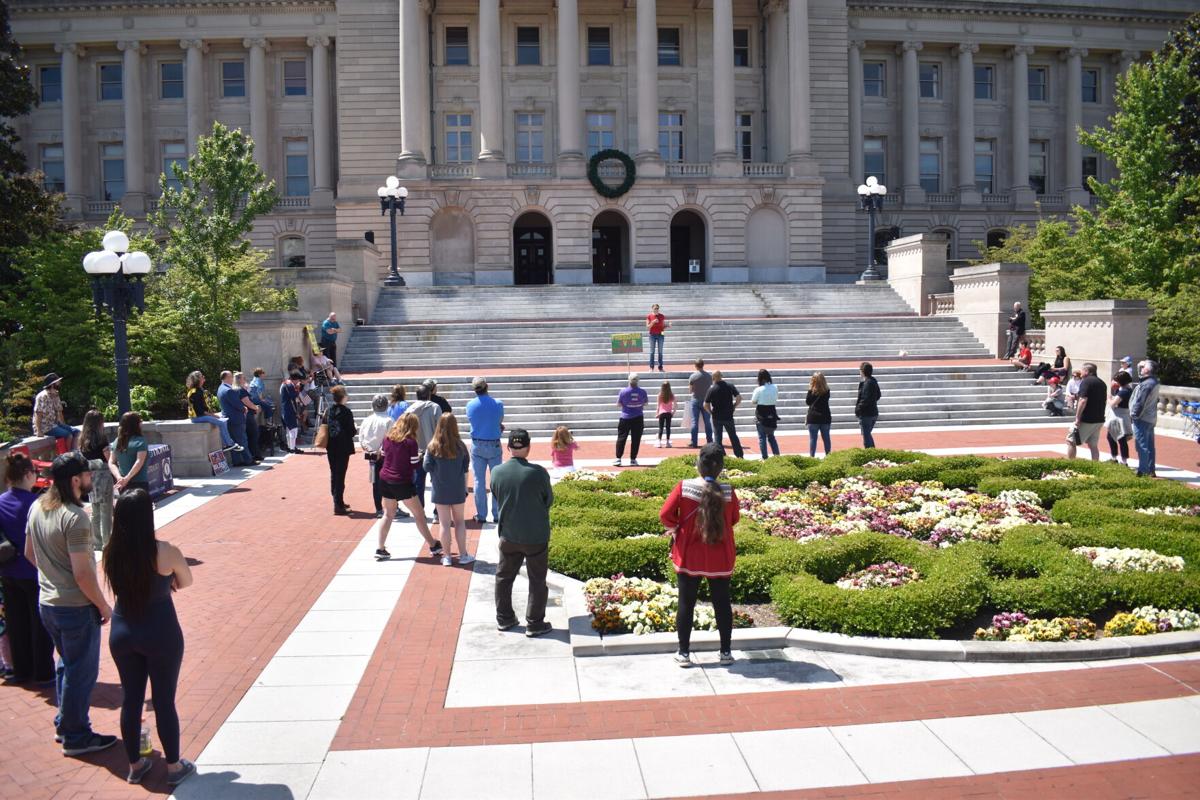 Well over 100 people attended the event on Saturday. (Austin Horn | The State Journal)

Kimberley Turner was one of several speakers at the "Unmask Kentucky" event on Saturday. (Austin Horn | The State Journal)

Kim Zimmerman has attended conservative pro-Trump rallies both in Frankfort and in Washington D.C. (Austin Horn | The State Journal)

Well over 100 people attended the event on Saturday. (Austin Horn | The State Journal)

Well over 100 people attended a rally Saturday in front of the state Capitol to decry COVID-19 regulations and the conduct of Gov. Andy Beshear.

People from across the region listened intently to several conservative speakers, some of whom spread unproven allegations about the COVID-19 vaccine and the results of the 2020 presidential election. Other speakers instead focused on conservative political participation and criticizing general government overreach.

The event, titled “Unmask Kentucky,” was organized before the Centers for Disease Control (CDC) significantly changed its guidelines to allow vaccinated people to go without masks outdoors and indoors and before Beshear’s recent announcement that Kentucky would end its mask mandate and capacity limits on June 11.

Still, those in attendance had a bone to pick with Beshear and his response to the pandemic.

Andrew Cooperrider, who owns a Lexington coffee shop that previously faced litigation for refusing to comply with COVID-19 restrictions and is suing Beshear for those restrictions, spoke first.

Cooperrider heard several calls from the crowd asking him to run for elected office.

“If there’s one death, or even one bad negative reaction to the vaccine from a person who's already had COVID ... the CDC should be held legally liable for medical malpractice,” Cooperrider said.

He also derided the state’s handling of COVID-19 restrictions on businesses like his. He lauded Chris Wiest, a Kentucky attorney who champions conservative causes and is Cooperrider's counsel; Wiest also represents Franklin County Sheriff’s Deputy Jeff Farmer in a lawsuit against Franklin County's public defenders over alleged defamation.

Wiest was supposed to speak at the event, but Cooperrider took over the crowd once more to explain Wiest’s legal background.

The group Constitutional Kentucky was present, advertising a leadership forum and passing out a DVD featuring pillowmaker and conservative political figure Mike Lindell’s program on the results of the 2020 election.

Lee Watts, self-described “volunteer chaplain to the Kentucky Capitol,” said that while he was not against all vaccines he was very much against the COVID-19 vaccine.

“If the vaccination is so great, how come they have to beg you to take it?” Watts said.

“I have no intention of getting this vaccine,” Baker said. “... We’re smart enough to make our own decisions on this thing.”

Baker derided the decisions of Franklin Circuit Court Judge Phillip Shepherd, who has upheld a number of Beshear’s COVID-19 orders.

“There’s no justice in that guy,” Baker said. “He’s a pure political hack and he needs to go.”

Mary Lynn Houtz, of Winchester, said she traveled from Winchester to attend the Saturday event because of her disdain for Beshear and her frustration with big government.

“It’s about legitimate representation,” Houtz said. “Our government has tremendous overreach into our business.”

Lawrenceburg resident Katie Howard, who ran unsuccessfully against Southworth in the Senate District 7 GOP primary last year, said she was trying to get people like those who showed up at the rally to get involved in local politics. Then, she said, their views could more widely affect public policy.

“It all starts from the ground up,” Howard said. “Influence has to start with school boards, our magistrates, city councils.”

Dr. Frank Simon, a popular conservative physician in the state, spoke about videos that he had seen on Facebook and what he called a “fraudulent election” in 2020. He claimed the election in several different races was “rigged” against conservatives, citing votes going “through the internet” and using machinery made in “Communist China” as cause for concern.

No evidence of widespread election fraud or tampering in the 2020 election has been discovered.

Simon also shared that he had been hospitalized for COVID-19 roughly a month ago.

To close the event, 2020 Republican congressional candidate Rhonda Palazzo of Louisville led the crowd in a call-and-response style that denied the efficacy of COVID-19 vaccines.

During the rally, a smaller crowd of people gathered in front of Governor’s Mansion to support Beshear’s policies, per a Spectrum News report.

“The attorney representing Jacob Anthony Chansley, also known as the “QAnon Shaman,” has spent months arguing that Donald Trump is responsible for his client storming the Capitol on Jan. 6.

Now, he says Chansley and other accused Capitol rioters were especially susceptible to being duped by baseless claims about election fraud. In expletive-laden remarks to Talking Points Memo, lawyer Albert Watkins pointed to their mental abilities, using a pejorative for people with intellectual disabilities.

“These are people with brain damage,” Watkins said.

He went on to say that the alleged rioters deserved empathy, arguing they’re not “bad people.” Their actions came, he said, after they were subjected to what he described as “propaganda” not seen since Adolf Hitler.“

They should have been arrested as domestic terrorist for instigating biological warefare with a deadly virus that has killed 600,000 Americans and is still killing 600 a day across the nation.

True. They ARE the tyranny!

Wait... if their Immune System is working so well why are they so s-p-r-e-a-d out in the photos?

Couldn't they all be in a jumbled crowd and still be just as safe?

This is just too confusing... all those doctors and epidemiologist spend their whole LIVES battling virii then along come these well reasoned and smart patriots with their "Nuh uhhhhh!!!" WHO DO I BELEIVE???

I'm not sure I can add anything better than "They aren't smart enough to come in out of the rain."

Doesn't look like much of a "crowd" to me! And the few people that are complaining are against three of the best things to come down the pike in years - our Governor Beshear, masks to keep us safe and vaccines to protect us from Covid-19. I support and appreciate all three of those items.

These people are NOT conservatives, they are fringe radicals, the new “know nothing party”! I’m not sure why they’re complaining about the mask mandate, because they have never worn them. They complain about a vaccine that they’ve never taken, and never will take. They’re part of the problem not part of the solution. It doesn’t surprise me that Adrian Southworth was there championing their causes, she’s pretty much a no nothing too! They are whiners, losers, complaining about something that doesn’t even exist anymore. For them it never did exist. They are the reason that we will have this virus for the next decade, and all I can say is thanks for nothing.

They talk about smart enough to be able to make the wrong decisions, based on what? Most couldn’t pass high school biology, much less challenging epidemiologists, like Dr. Fauci! They aren’t not smart enough to get out of the rain.