The Franklin County Fiscal Court voted to finalize two major items at its meeting on Thursday evening: its budget for the Fiscal Year 2022 and the agreement to establish a Tax Increment Financing (TIF) District with the city for the mostly vacant parcels B and C.

The TIF agreement, for the county to commit 50% of all net new tax revenue from the area towards public infrastructure costs, became final in a second reading by a 6-1 vote. Only Magistrate Sherry Sebastian voting against it — the same result as the first reading.

Judge-Executive Huston Wells, who has been a strong advocate for the county’s participation in the TIF District, was overjoyed at the court’s decision.

“This is a collaboration of both city and county governments pulling together for the betterment of our community,” Wells said. “This is really unimaginable for a community to have 10 acres in its downtown… we’re going to do all we can to make sure that the development happens as quickly as it can and in the correct way.”

Sebastian said that she voted “no” for a variety of reasons, including the perceived inflation of economic numbers provided to the court by the firm Commonwealth Economics and the fact that the bidder, Businessman Marty Johnson’s New Frankfort Development, LLC, shirked responsibility of building the parking garage.

The City of Frankfort, anticipating a $5.5 million federal grant on which the entire agreement is contingent, has assumed responsibility for the garage and will use it and the county’s TIF funds to pay back bonds taken out to pay for the garage.

“I’m eagerly hopeful that the community will benefit from these lofty projections, but I remain challenged by the duration of the pledge, the reliablity of the economic impact projections and assuming the liability of the garage that will be in the immediate vicinity of two existing garages,” Sebastian said.

Present at the court’s meeting, city and county TIF attorney Jim Parsons provided an update and fielded the county’s questions about the agreement. He had altered a previous 50% agreement to include some stipulations added by magistrates at their last meeting. Those include a 20-year time limit, and a limit in TIF contributions to $1.5 million or until all public infrastructure costs are paid off.

Parsons said that the next step for the city, county and proposed developer — Johnson along with Craig Turner’s CRM Companies — in the agreement would be to identify the state TIF program to which they will apply.

Parsons and Frankfort Mayor Layne Wilkerson have indicated that it would make sense for the group to apply for the state property/ad valorem TIF. The other type of TIF on the table is mixed-use, which has the potential to bring in more state money toward the project but involves a significantly more arduous approval process.

In response to a question from Magistrate Michael Mueller, City Attorney Laura Ross said that while the city is engaged with the federal government regarding receipt of the anticipated $5.5 million grant, it does not yet have a timeline for when it believes it will receive the grant.

After multiple lengthy budget meetings, the Fiscal Court settled on an appropriations budget for the upcoming fiscal year, which will begin on July 1, of just over $35.7 million. The budget was approved unanimously.

Treasurer Susan Laurenson and multiple magistrates noted that this year’s budget was an abnormally large one for two primary reasons: rollover capital projects from the previous year including the renovation of the old health department building for use by the Simon House and an energy savings project at the Franklin County regional jail, as well as receipt of more than $5 million in restricted federal grant money.

One brief topic of discussion was the need for a part-time position to assist Planning & Zoning Director Robert Hewitt. Hewitt initially asked for a full-time land planner, but the court later compromised and agreed on hiring someone on a part-time basis.

Mueller questioned whether or not the court was making the right hire, and if the distribution of work might be better handled if a new hire were to take some of Hewitt’s extra work in areas other than Planning & Zoning.

Hewitt responded to questions by emphasizing the heavy workload he has had to take on as a result of the county’s growth and his eagerness to take on responsibilities not traditionally conferred to departments such as his.

“The lion’s share of all phone calls coming into our office is to my department,” Hewitt said. “… 2020 was the greatest amount of permits we’ve issued in the last decade.”

The court eventually moved on from that discussion shortly after Magistrate Lambert Moore insisted that Hewitt knew best what his department needed.

Moore also expressed relief that the court was able to pass its budget unanimously, with most everyone getting some portion of what they wanted in the budget. Multiple magistrates agreed, and thanked Treasurer Susan Laurenson for her hard work.

“It was an arduous task,” Magistrate Marti Booth said. 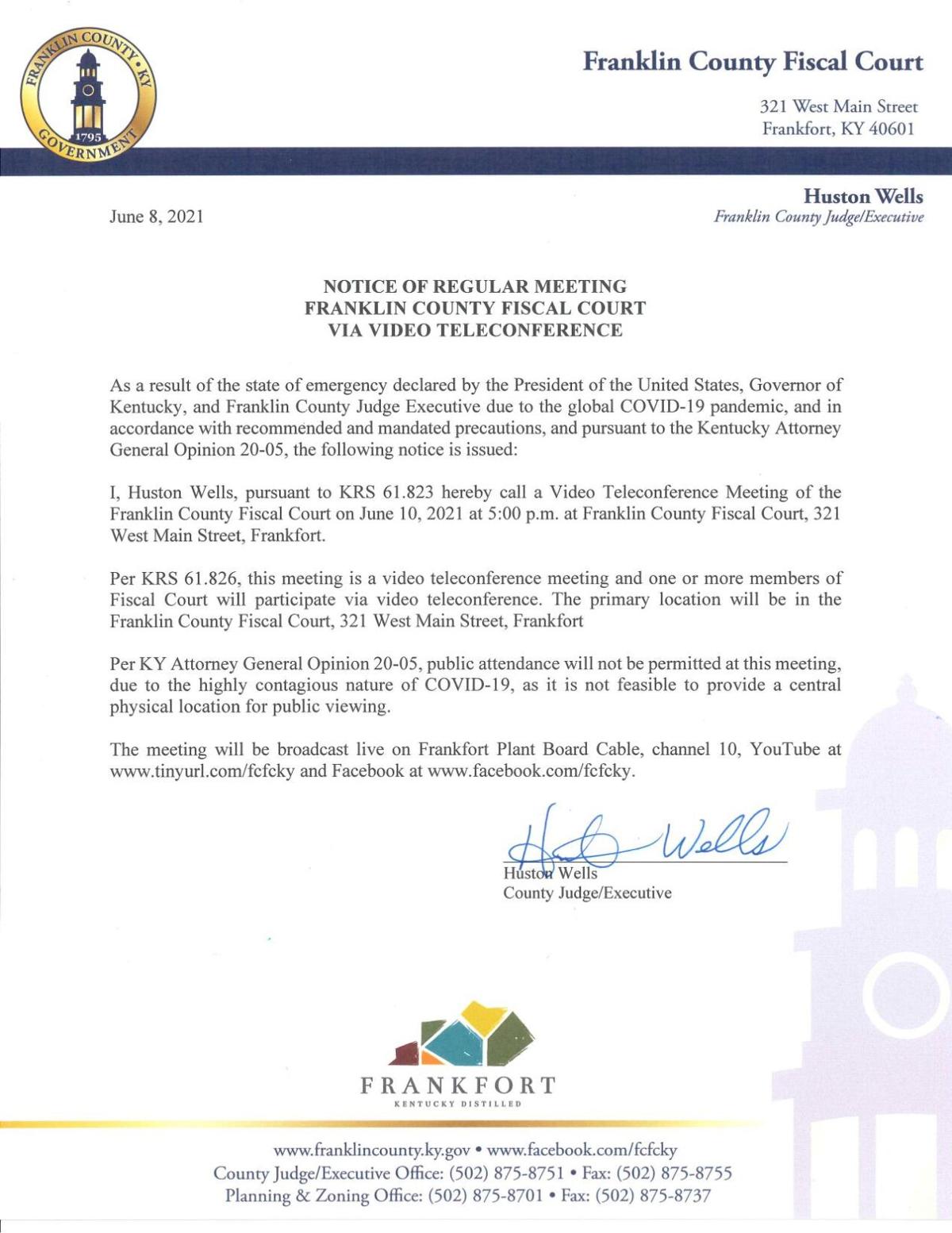 Following up on a previous discussion held when the county opted to cut Kentucky Capital Development Corporation’s budget by $15,000 for the second year in a row, Mueller asked once again for a joint meeting with the city and county governments regarding economic development.

Initially, Mueller said that he had spoken with Wilkerson and all the city commission and that they wanted the meeting held this July. Wells responded that he had alerted City Manager Tommy Russell and had heard nothing back.

“I've talked to the city manager and I said ‘please talk with the mayor and let's get a meeting scheduled,’” Wells said.

Mueller later said that he misspoke and had only contacted one commissioner and the mayor after County Attorney Rick Sparks warned Mueller could have violated open meetings law by contacting the entire city commission.

“It’s mind-boggling to me,” Tracy said. “It’s been very successful for the last 40 years.”

Wells, who sits as the county’s representative on the board, assured them that no health department workers lost their jobs as a result, that the agency was working with the nearly 20 individuals who relied on the service to get help from other agencies and that this closure was part of a growing trend across the state.

“The City of Frankfort, anticipating a $5.5 million federal grant on which the entire agreement is contingent, has assumed responsibility for the garage and will use it and the county’s TIF funds to pay back bonds taken out to pay for the garage.“