After a legal requirement made the Franklin County Park Committee return to the fiscal court to move along with creating a feasibility/master plan for a reimagining of Lakeview Park, the court voted 6-1 Thursday to allow the committee to negotiate with selected firm Hitchcock Design Group.

Magistrate Marti Booth, who cast the single “no” vote, has previously cited concerns about spending taxpayer money on another plan of some kind.

In support of Hitchcock Design Group, Park Committee member and Magistrate Scotty Tracy pointed to a plan produced by that company in McCracken County for a large development. Magistrate Michael Mueller also expressed strong excitement for the plan process.

In both an official work session and during the court’s regular meeting Thursday, the court also began its lengthy budget discussion process by focusing mostly on the Franklin County Regional Jail.

The budget for fiscal year 2022 proposed by Jailer Jake Banta projects a $350,000 revenue loss and a raise of nearly $70,000 in appropriations. Because of that, the projected allocation of county general funds to the jail is slated to rise from $2.16 million to over $2.57 million, an 18.5% increase.

One consistent expense that Banta said he’d particularly like to keep is competitive wages. His proposal includes a plan to raise the jail deputies' starting wage to $15 per hour; it was $14 per hour.

“It’s hard for me to get people from other agencies if they’re making money,” Banta said. “There’s only one that has been less than us … . The main thing is to keep those 48 deputies and to be able to give them a nice raise.”

Magistrate Sherry Sebastian expressed concern about one line item that had risen recently: medical services. She mentioned that it was a concern not only as a budget increase, but noted a number of lawsuits related to the jail’s medical services.

She said she hoped the county could “tighten up the belt” on that item.

Banta sympathized with Sebastian’s concerns, saying that the increase in that line item was recent due to the jail’s newer contract with Southern Health Partners, and that in looking around at other medical services providers there may not be a better alternative.

“I’m right there with you,” Banta said. “We got the contract in last week and we’re still reading through it. We’re still digging through it now, and I’m sure when I work to present that contract to the court I’ll have a lot of questions.”

The fiscal court also received, but did not vote on, a budget proposal from the Kentucky Capital Development Corporation (KCDC). Last year, the court cut its KCDC contribution from $115,000 to $100,000.

KCDC’s proposed budget recommends that the county go back to contributing $115,000.

Wells told the court that he has scheduled two other budget work sessions this month — one for April 14 and the other for April 28. 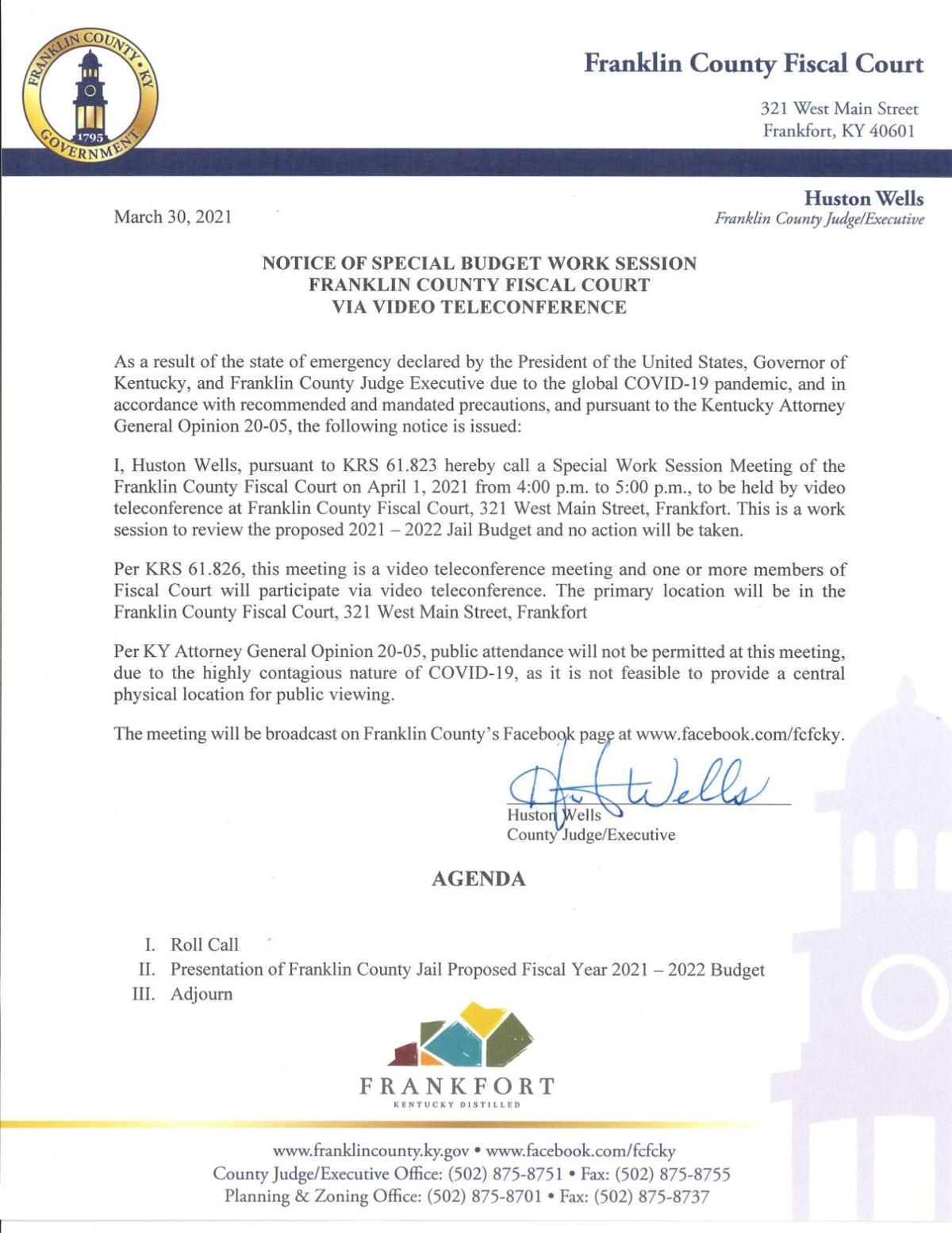 • Franklin County Solid Waste Management Coordinator Brittany Woodward updated magistrates on her department's work, focusing particularly on funds that could be available to any resident in the county or city whose property was damaged by flooding earlier this month.

The grants, she said, could allow for citizens to get funding for repairs caused by flood damage.

Residents can pick up or turn in applications at the Franklin County government office on West Main. Questions should be directed to floodgrants@franklincounty.ky.gov.

The grant application can also be downloaded at https://franklincounty.ky.gov/march-2021-flood-event-grant-application/.

Woodward said the deadline to apply is May 7.

She said both the city and county will apply for the assistance, which is eligible to those affected by the COVID-19 pandemic and can be distributed to individuals for up to six months.

“We have contacted our local utilities and worked on getting the amounts needed in Frankfort and Franklin County to submit with the application,” Northcutt said. “Both city and county are eligible for $200,000 in assistance. If the county does not need the entire amount, city residents' funding can also be applied to the county application so, upon review of the current need, both city and county will be asking for the maximum funding. Once we receive word we have had our applications funded, we will contact the utilities who will let their customers know how to apply and what information is needed.” 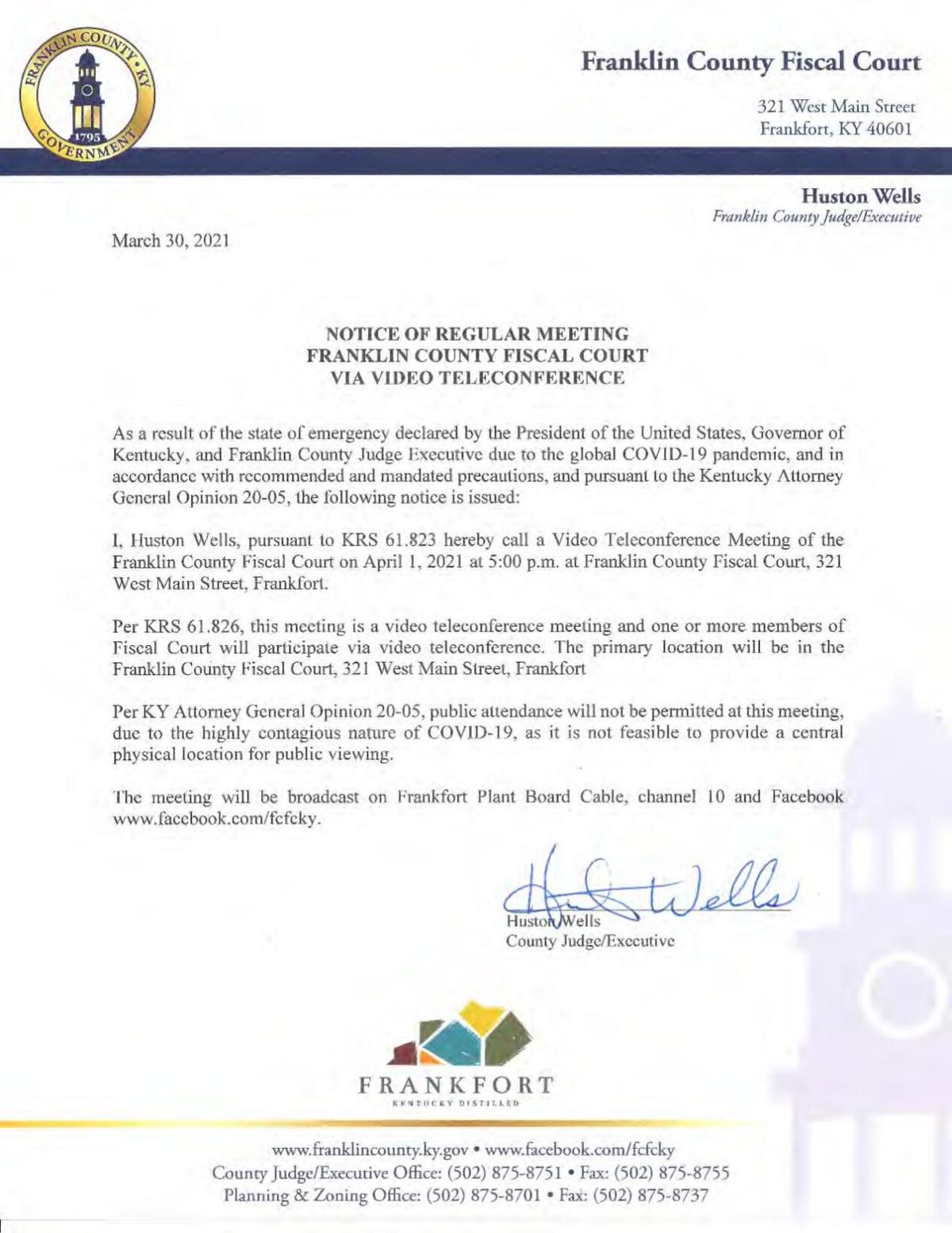 “After a legal requirement “ For the CJE and the County Attorney to go to work? Shouldn’t that be a “ moral requirement “ ? It takes a threat by a legality to get them off their rear ends ( to go sit on their rear ends) to actually do their work fo the taxpayers? Isn’t that strange ? ............... it’s those two that tried to put this meeting off even longer, a while back — remember?

The KCDC funding needs to be abolished and that $ going to worthy cause like the Lakeview park project.