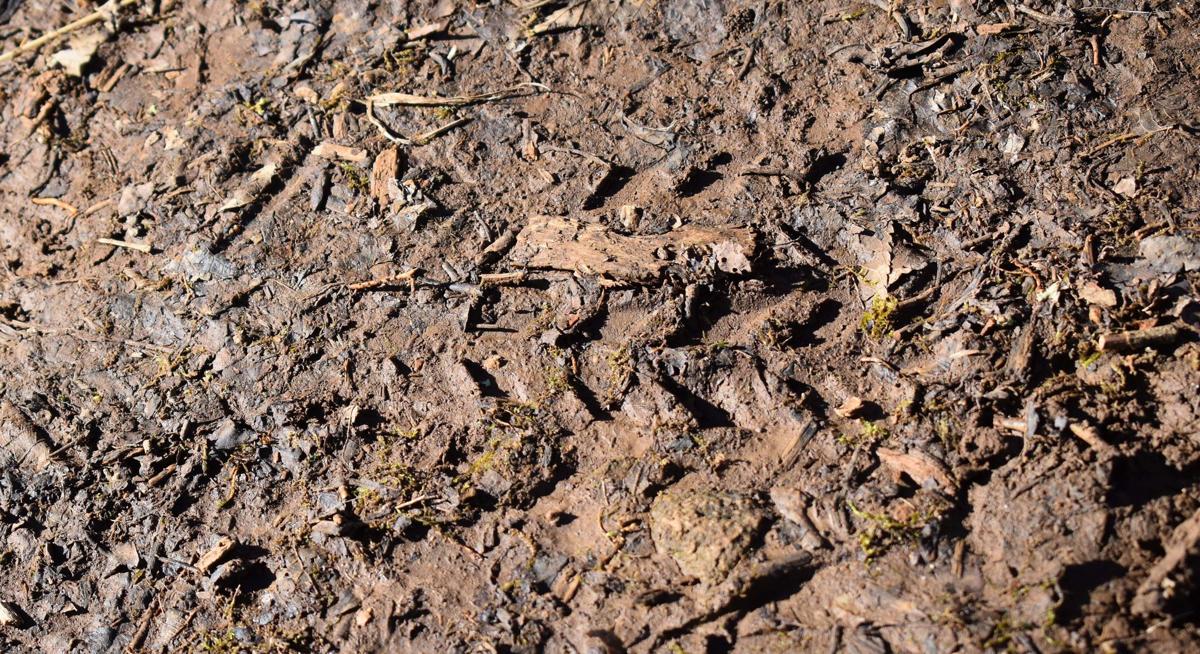 Frankfort resident Christian Lee showed The State Journal this imprint in the mud along the hiking trail at Leslie Morris Park on Fort Hill on Thursday. Lee said a bicycle, which are prohibited at the park, may have created this imprint. (Jordan Hensley/The State Journal) 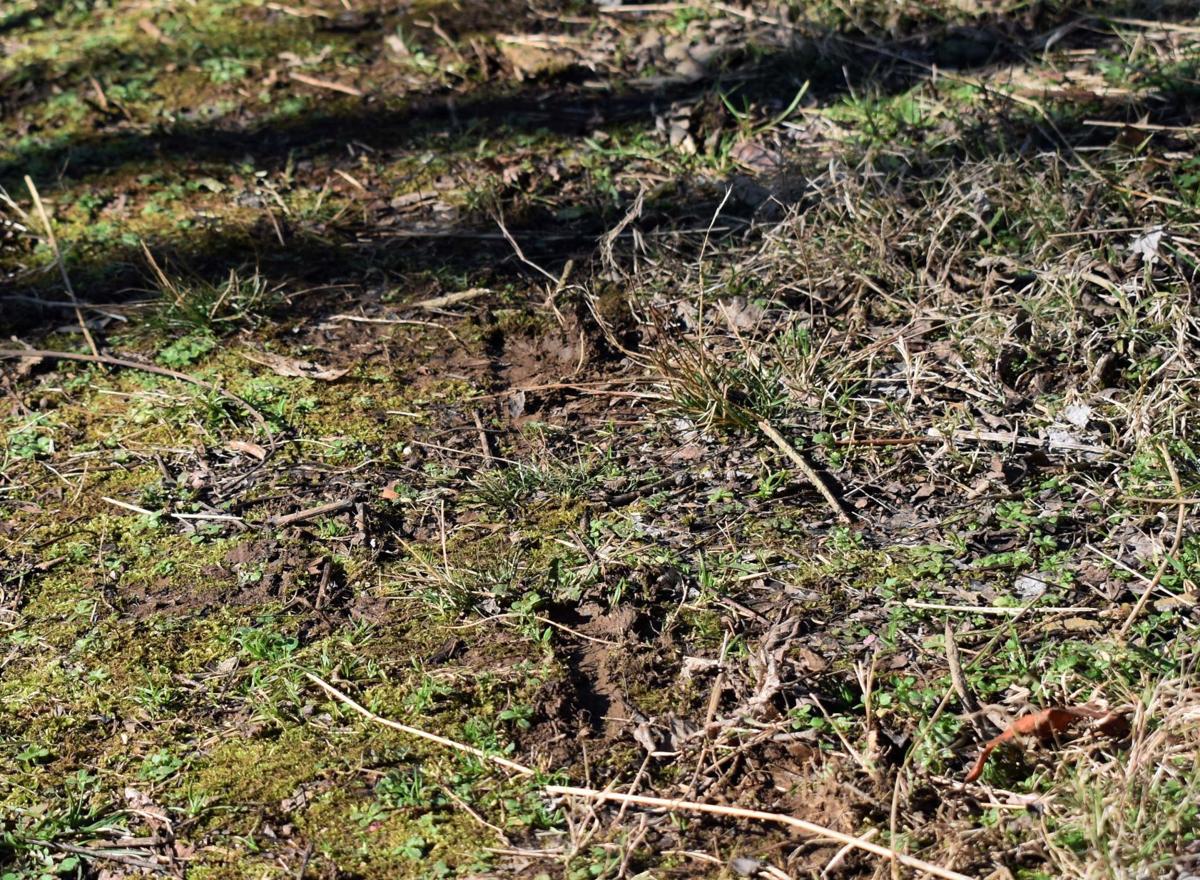 Frankfort resident Christian Lee showed The State Journal this divot in the mud on the hiking trail at Leslie Morris Park on Fort Hill on Thursday. Lee said a bicycle, which are prohibited at the park, may have created this divot. (Jordan Hensley/The State Journal)

Frankfort resident Christian Lee showed The State Journal this imprint in the mud along the hiking trail at Leslie Morris Park on Fort Hill on Thursday. Lee said a bicycle, which are prohibited at the park, may have created this imprint. (Jordan Hensley/The State Journal)

Frankfort resident Christian Lee showed The State Journal this divot in the mud on the hiking trail at Leslie Morris Park on Fort Hill on Thursday. Lee said a bicycle, which are prohibited at the park, may have created this divot. (Jordan Hensley/The State Journal)

At least twice a week, Frankfort resident Christian Lee takes his dogs for a walk along the trails at Leslie Morris Park, home of Fort Hill, which served as an earthwork fort site during the Civil War.

He didn’t let his twisted ankle stop him from showing The State Journal two areas along a small portion of the natural surface trail where he's spotted bicycle tracks before.

Sometimes he’s more confident in his assessment, but on Thursday Lee was hesitant to say for certain if the divots and imprints in the mud are indeed bike tracks. He’s never seen a bicycle at the park, but he said he does come across questionable tracks often. He pays attention because he likes to look for animal tracks.

Lee has never called and complained about the bike tracks. He knows they’re not supposed to be there. In fact, he likes coming to Leslie Morris because his dogs like to chase bicycles.

During citizens comment at the Frankfort City Commission meeting Monday night, Blanton Acres resident Louis McClain expressed concern on behalf of the neighborhood that’s connected to the park that there have been bike tracks spotted along the trail. He also raised concern about the work being done on the trails.

The hiking trails at Leslie Morris were originally deemed multi-use trails. Construction on the trails began in October 2018 after the project was approved by the Frankfort Parks, Recreation and Historic Sites board and former City Manager Cindy Steinhauser.

On Monday, current Frankfort City Manager Keith Parker said his office has not received any phone calls about bicycles at the park, but if someone has seen bikes up there he wants to know about it.

On Friday, Troy Hearn, who serves as trails coordinator for Frankfort’s Parks, Recreation and Historic Sites Department, said he’s been working on the Leslie Morris trails since 2018.

To Hearn’s knowledge, he’s never seen any evidence proving the claim of bikes on the trail.

Hearn said he’s personally never received any complaints about bicycles on the trail either.

As for work being done on the trail, Hearn said he and his "professional volunteers" work on keeping the trails maintained. He said the work that Blanton Acres residents had observed was volunteers cutting down dead trees that were in danger of falling on the trail and/or hikers.

For City Commissioner Scott Tippett, who voted against bicycles at the trail last June alongside Commissioner John Sower and Mayor Bill May, keeping bikes out of Leslie Morris and Fort Hill is something he’s passionate about.

During Monday night’s meeting, Tippett proposed that the city should apply to have the entire park put on the National Register of Historic Places.

“In my view, it is a significant historical site for many reasons … (Fort Hill) should be preserved at all costs and protected,” Tippett told The State Journal on Friday.

Tippett said he’s been consulting with local and Civil War historians who agree that the entire site should be on the register and the process is already underway to submit that application.

While Tippett is against bicycles being used at the park, he said he is not against most recreation efforts in other parks and other areas of the city.

“As long as I’m on city commission, I’m going to continue to defend the site,” Tippett said, adding that Fort Hill is an important part of American history and protecting it is the morally right thing to do.

Tippett recognizes that just because something is on the National Register of Historic Places doesn’t mean it is entirely protected.

The federal government leaves it up to state and local governments to determine protections for historic places.

In Frankfort, the Architectural Review Board “shall consider all applications for National Register listing within the City of Frankfort, except those that are part of an awarded grant issued by the Kentucky Heritage Council, where the City is the applicant. Once individual sites or districts are listed on the National Register, the Board will not automatically obtain review powers for new construction, exterior remodeling and demolition. This designation will be considered for future rezoning requests.”

“If the future board (of commissioners) chooses to desecrate (Fort Hill and Leslie Morris), that’s on them,” Tippett said.

During the planning process, Hearn said the historical significance of the area was taken into consideration and that the nearly 4 miles of trails are a "respectful distance" away from the actual historical sites. According to a previous State Journal article, the trails are at least 300 feet from any environmental, historical and archaeological sites.

However, Hearn argued, there are historical places such as Gettysburg where trails run right through the historic area.

Could the tracks people are seeing along the trail be from wheelchairs? Hearn said it is possible, however, he's never seen someone in a wheelchair using the trails. He also noted the trails are not compliant with the Americans with Disabilities Act.

Hearn said he appreciates the work of the parks office and the board and the objectiveness the city manager has had toward everything.

“I just wish city commission would be more objective too,” he added.