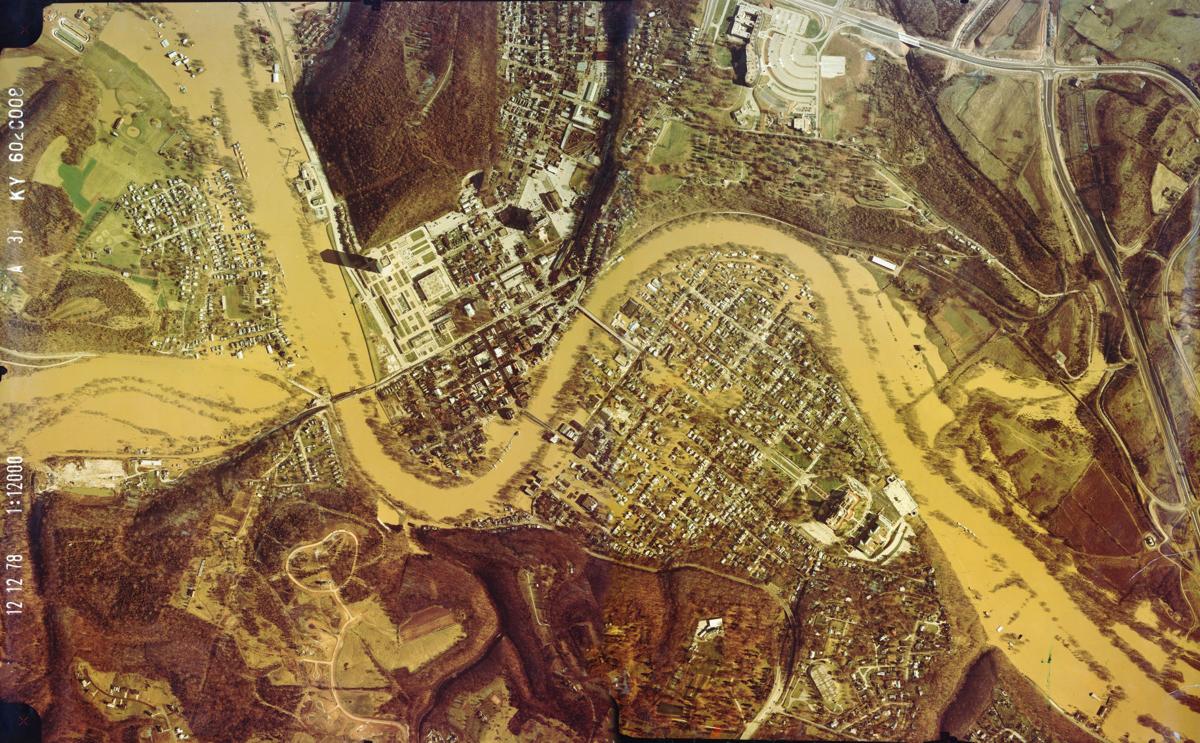 This aerial shot of Frankfort was taken on Dec. 12, 1978, after the Kentucky River crested at 48.47 feet and burst its banks. 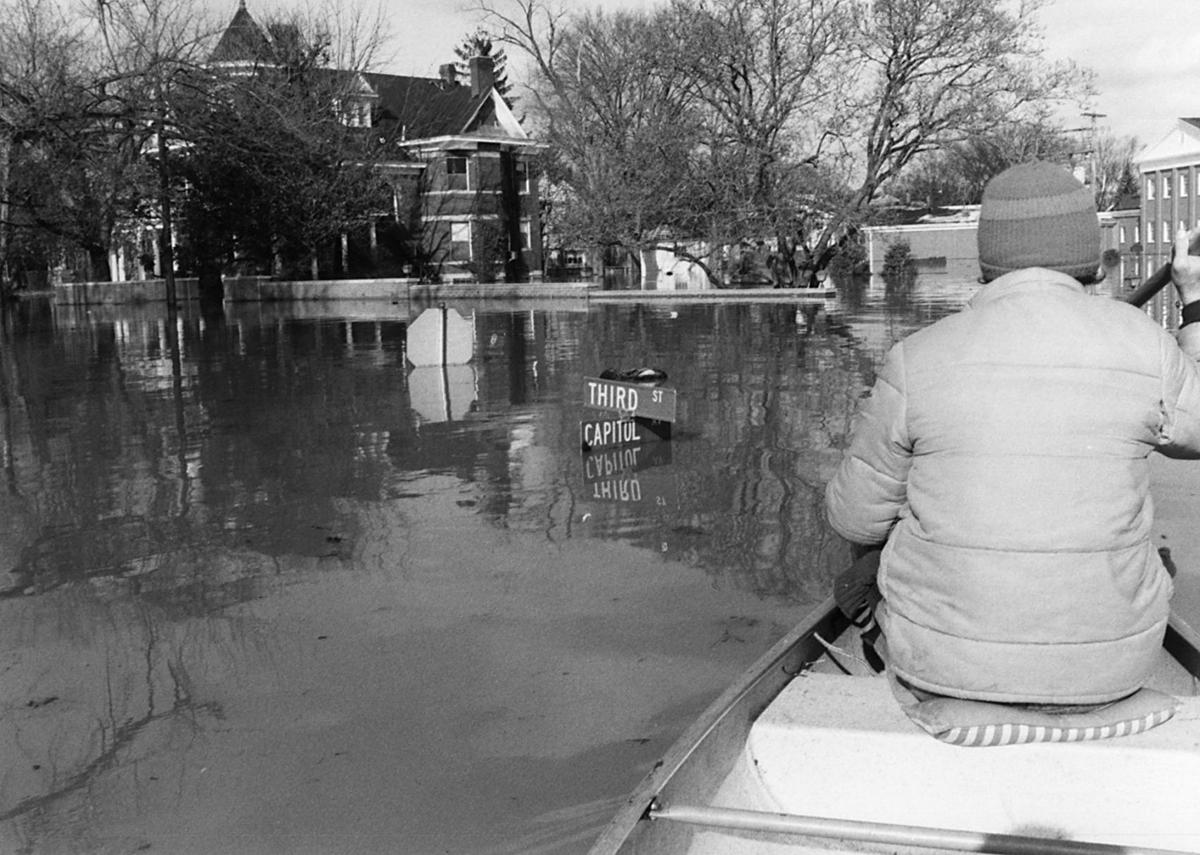 The street sign at the corner of Third Street and Capital Avenue is nearly submerged. 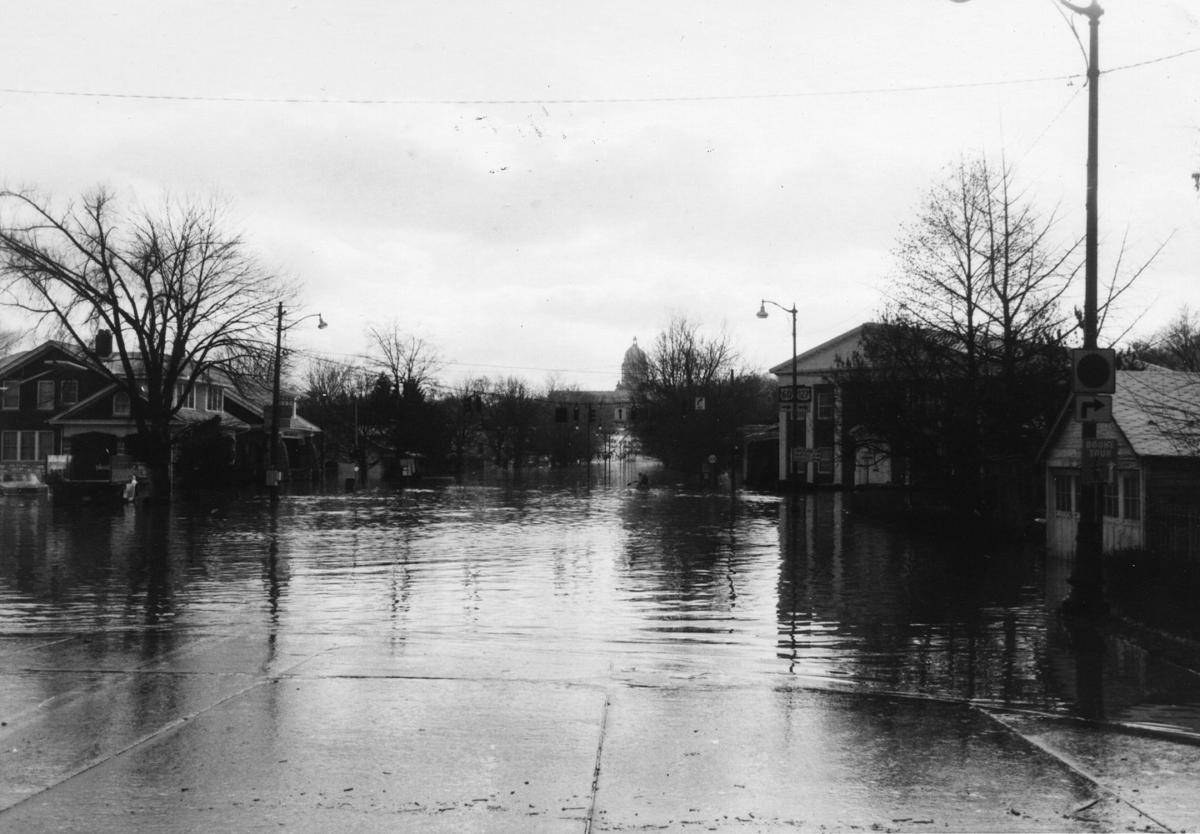 A view of the Capitol from the Capital Avenue Bridge. 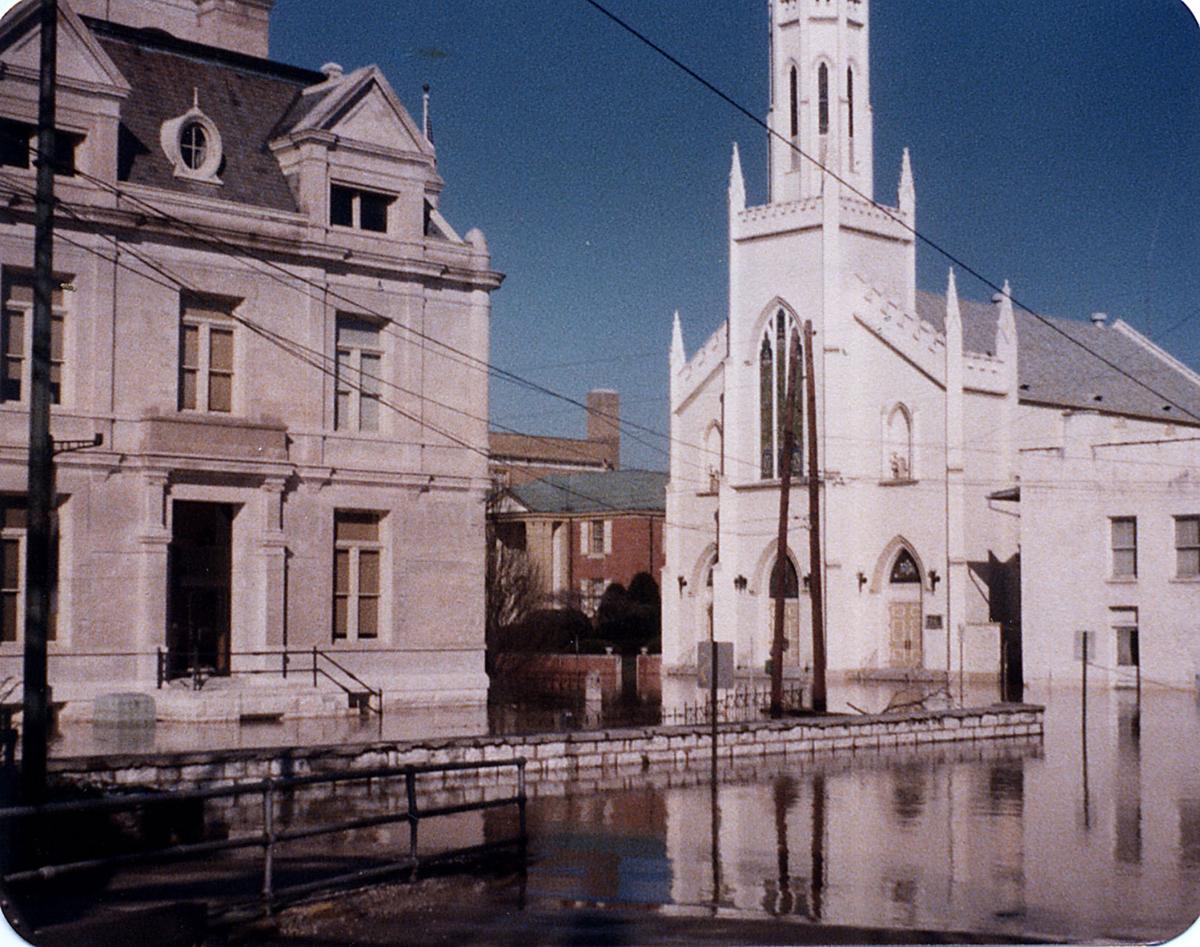 The corner of Wapping and St. Clair streets. 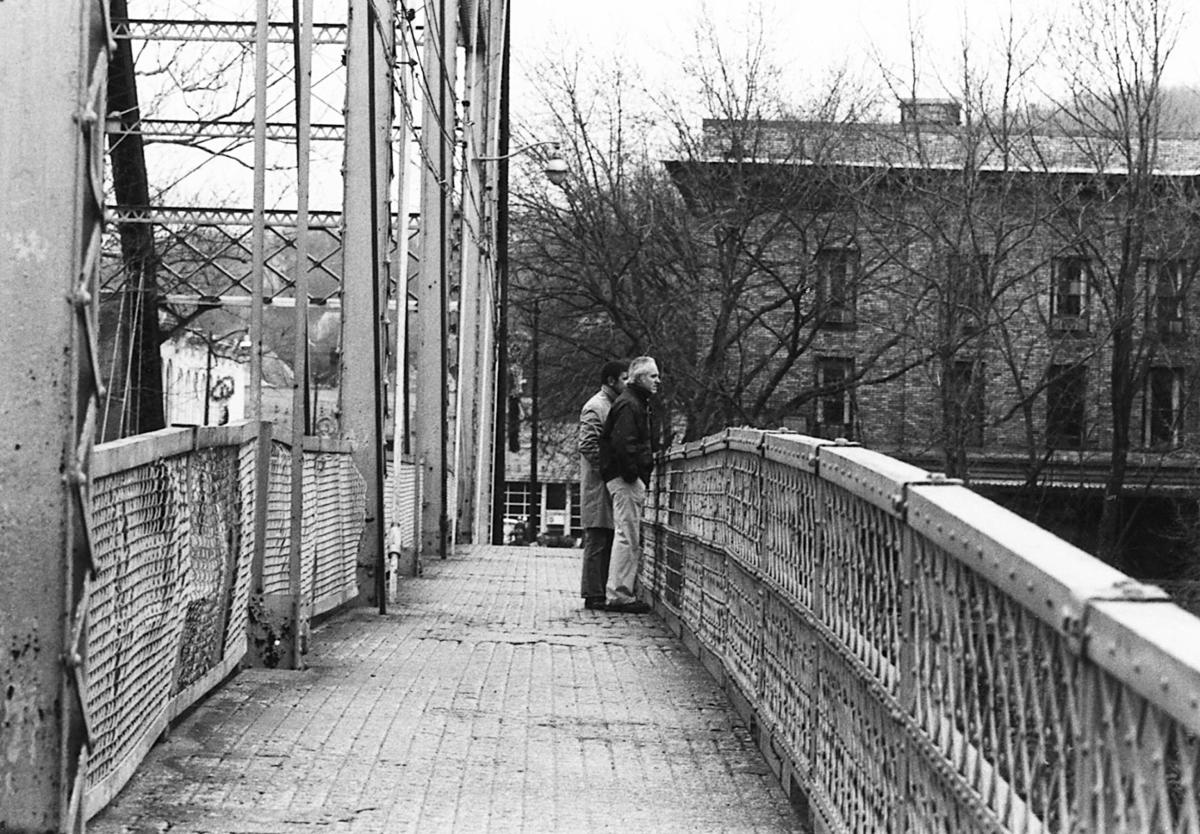 Then-Gov. Julian Carroll looks at the Kentucky River from the Singing Bridge. 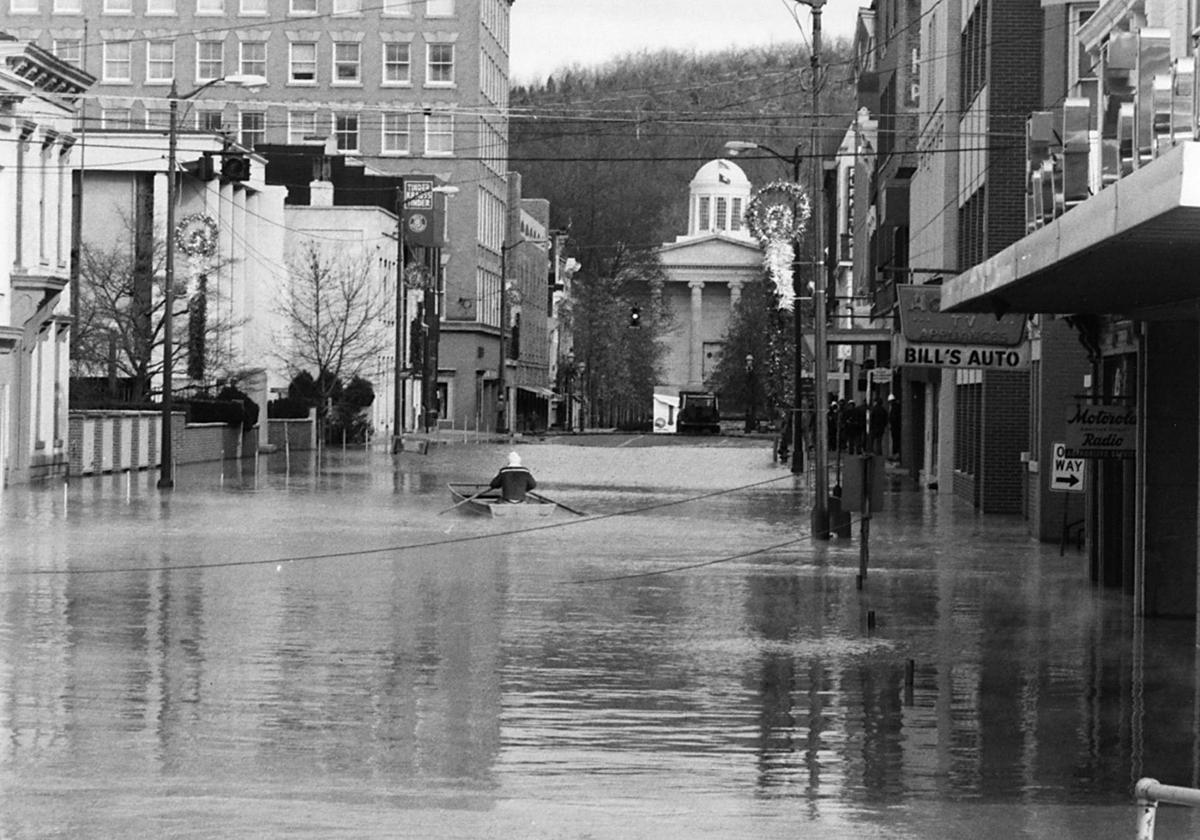 A person in a canoe boats down St. Clair Street near the Old Capitol. 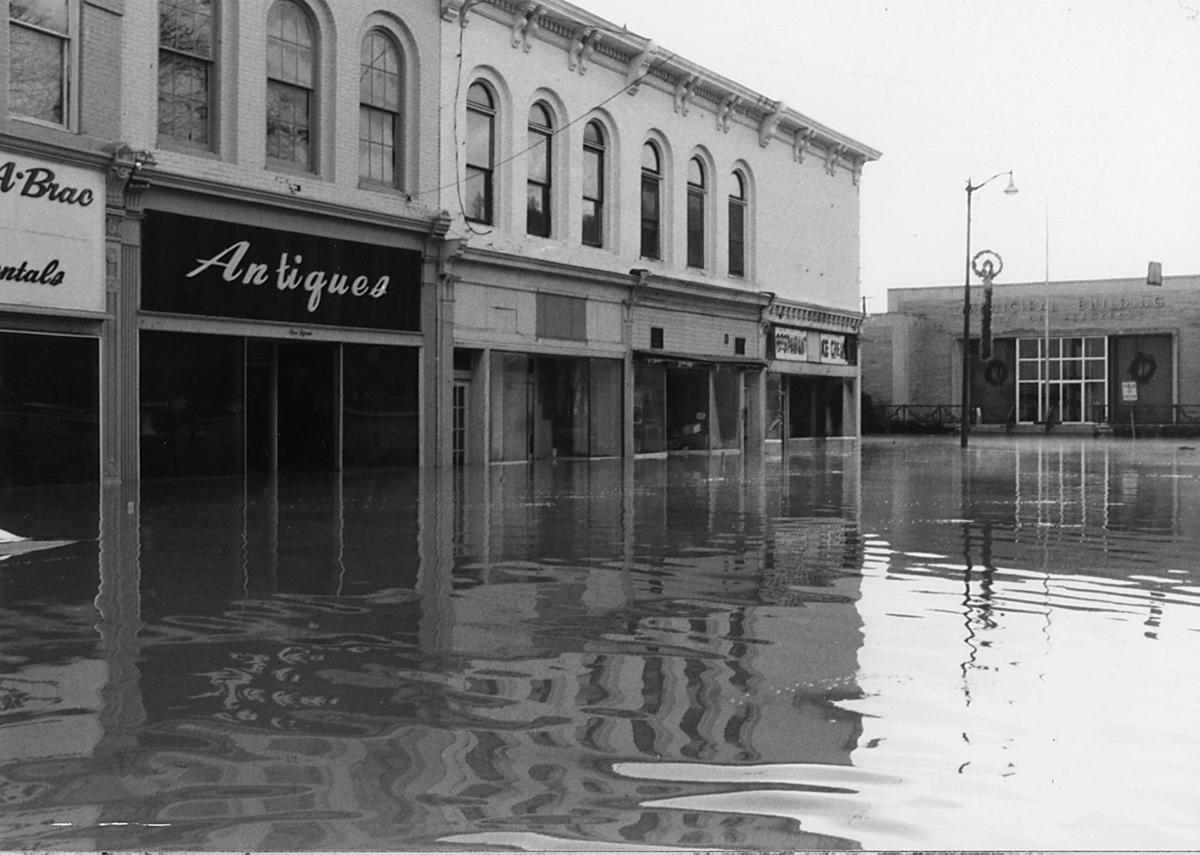 The floodwaters on Bridge Street were several feet deep. In the background is City Hall. 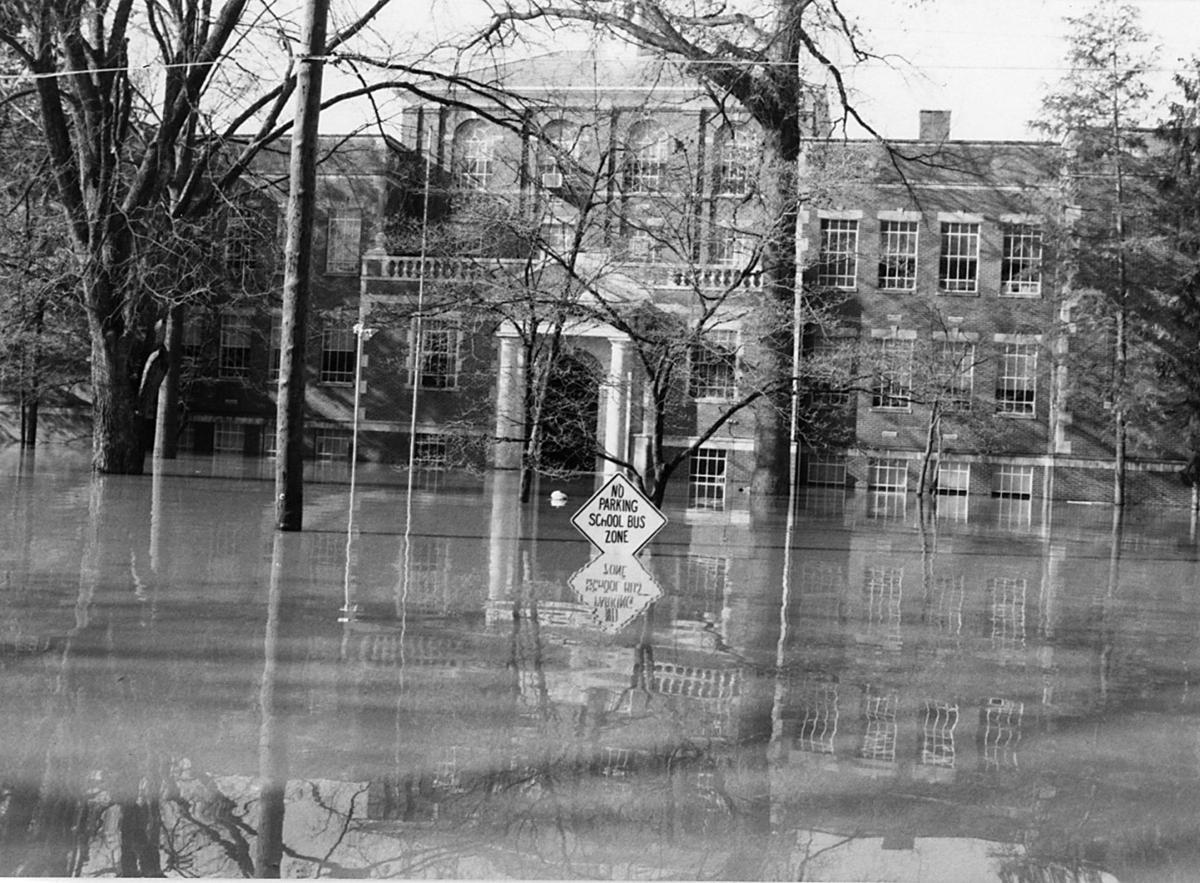 Frankfort High School was surrounded by water on all sides. 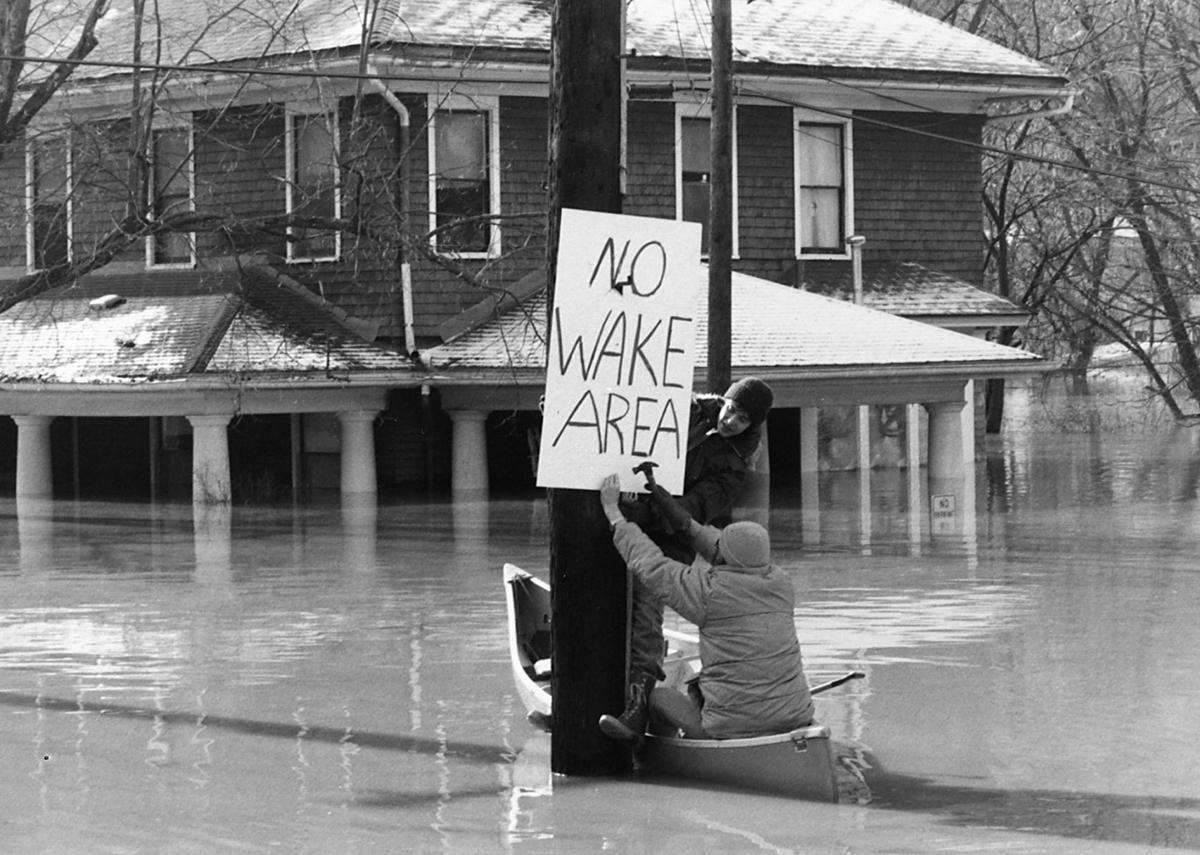 The "No Wake" posted in South Frankfort got a lot of laughs when they were really needed — but it wasn't funny, said City Historian Russ Hatter. 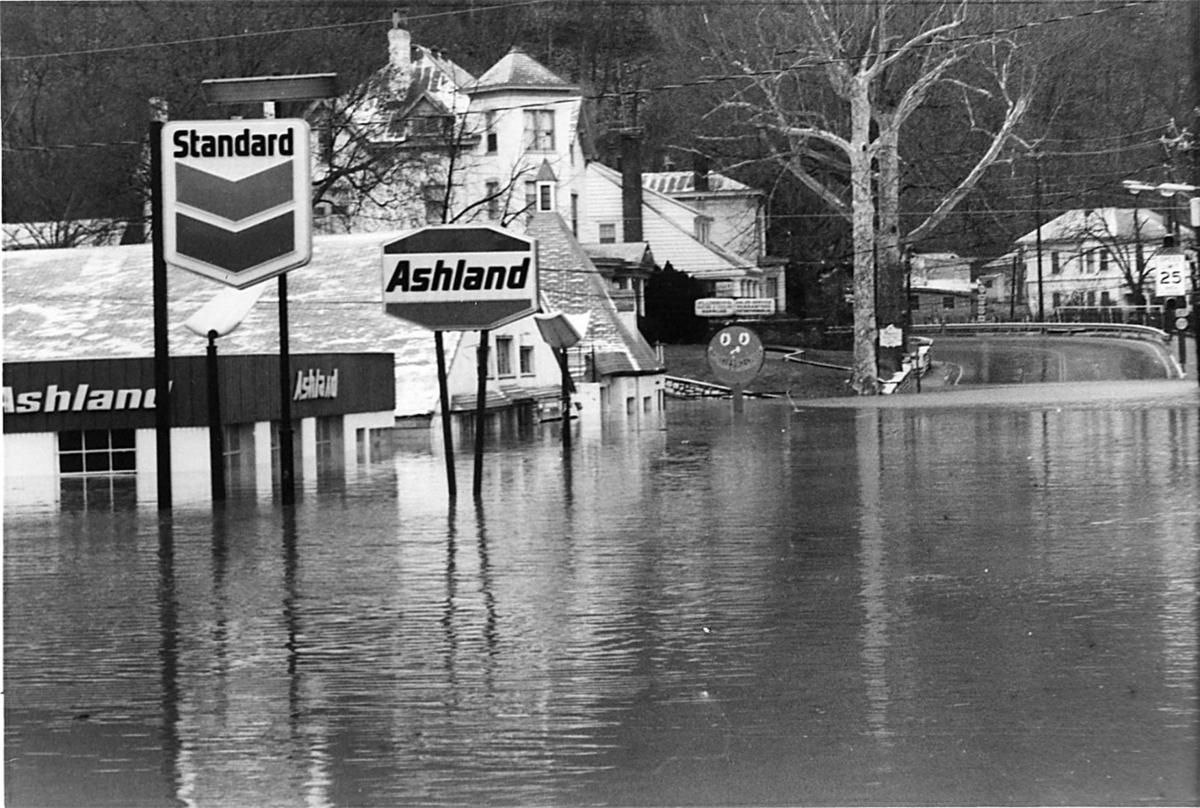 It happened 41 years ago this past week.

After a seven-day period in which the city received nearly 6 inches of precipitation, the Kentucky River busted from its banks, inundating most of South Frankfort and other low-lying areas in the worst flood on record.

In the more than 200 years of its existence Frankfort has repeatedly flooded, but nothing prepared residents for Dec. 10, 1978, when the river crested at 48.47 feet — nearly 10 feet over flood stage and a full foot higher than the Great Flood of 1937.

“If you have never been through something like that, there really is no way to describe it,” said Steve Brooks, who was the city’s Parks, Recreation and Historic Sites director at the time.

One of his main jobs during the flood was moving people out of their residences and to higher ground. With more than half of downtown underwater, 1,300 homes and 95 businesses were evacuated.

Brooks and his team were right in the middle of it, working around the clock to help people.

“We did what we were asked to do,” he added.

One of those tasks involved aiding the police. Then-Mayor Jim Burch had ordered a 5 p.m. downtown curfew mainly because much of the city was in the dark. But there were some who tried to take advantage of the situation.

While working the late shift in a speedboat that night, Brooks and his partner were patrolling Second Street close to Rogers Funeral Home when they received a call about a burglary on Steele Street near the former Pic-Pac.

“We gunned it up the street and the water was so high I had to duck my head to go under the traffic light,” Brooks said, but they got the perpatrators. “That’s something you never forget.”

He also recalled another close call he and then-Franklin County Deputy Sheriff Herman Young had when two huge propane tanks became lodged under the railroad bridge near the Broadway Bridge. The pair tried, to no avail, to free the tanks by poking them with large sticks.

“Looking back, that probably wasn’t the smartest thing,” Brooks chuckled.

The incident was no laughing matter for Frankfort City Historian Russ Hatter, who was pulling an all-nighter at WFKY radio station at the time.

He recalled several tense hours of discussion about whether the tanks could explode and the possibility that it could blow out the flood berm at Broadway.

“If that happened, the entire downtown area would have been devastatingly flooded,” Hatter said.

After much back and forth about whether to evacuate Wilkinson Street from Main to Broadway in the middle of the night, the action turned out not to be necessary. A crew from Georgetown successfully dislodged the tanks, and the river and Hatter kept right on running.

He remembers warning the audience that the rising river would likely knock the station off the air because the transmitter was located in Bellepoint, an area that easily took on water. Even though the radio studio was in Fountain Place and Hatter was high and dry, many listeners assumed he was engulfed in water and in danger.

“I still hear from people that jokingly remember thinking I had to swim to safety,” he said. “The community was fortunate that WKED, whose transmitter was high up on the Choatesville Road, was able to continue broadcasting reports from their studios in the McClure Building.”

Water, gas and phone service was interrupted and the capital was nearly cut off from the rest of the state. Then-Gov. Julian Carroll issued a state of emergency in Kentucky, closed state offices in Frankfort and delayed the start of a special legislative session.

The city’s two schools were also severely affected by the flood. Frankfort High School football and wrestling coach Ray Webb was standing in the gym when it began to take on water.

“I was by the stage and I heard a ‘pop’ and a little water spout shot out through the door. Then I heard ‘pop, pop, pop,’” he said. “I was wading water by the time I got to the door.”

Eventually the water in the gymnasium reached the windows. The school was surrounded on all sides and the basement, which took on 4-5 feet of water, became what the coach called “an indoor swimming pool.”

However, situated in the crook of the Kentucky River’s “S” near the Singing Bridge, Second Street School received the brunt of the damage.

Webb’s wife, Jean Anne, who taught seventh and eighth grade math at the school, had her classroom on the second floor, but she remembers watching water flow in through the basement windows.

“There was no warning to move things out,” she said, including the contents of 10 classrooms and the cafeteria. “We lost everything.”

The first floor was extensively damaged to the tune of $1 million, according to a federal assessment, which deemed the school was structurally weakened by the flood.

After Christmas break, while repairs were being made, school officials moved classes to the Frankfort Convention Center. More than 500 students had classes on the cordoned-off basketball court or in locker rooms.

Jean Anne Webb’s classroom was at the top of the stands outside a concession stand. Another teacher taught inside the concession stand and lunch was served in what is now the Capital Plaza Hotel restaurant.

She said the temperature at the convention center was controlled at a state building on Holmes Street and it was always either too hot or too cold.

“It was the opposite of what it should have been. We burned up in the winter and froze in the spring,” she added.

Across Second Street from the school, then-state Rep. Hank Hancock had just finished a remodeling project in the upstairs of the family plumbing business, Whitehead-Hancock. When he saw water come up from a manhole cover in the street he heeded the previous property owner’s advice and moved all his merchandise to the second floor.

“The flood didn’t stop at the ground floor. It moved right up the stairs and got it all,” he explained, including old mementos and papers and a special letter from his great-grandfather.

“It was a heartbreaking situation, but good results came from it,” Hancock said, speaking of the South Frankfort floodwall, which was completed just months before the river reached 45.22 feet in the 1997 flood.

Brooks said the floodwall has made a huge difference over the years.

“But,” he warned, “the smell from a flooded home never goes away.”