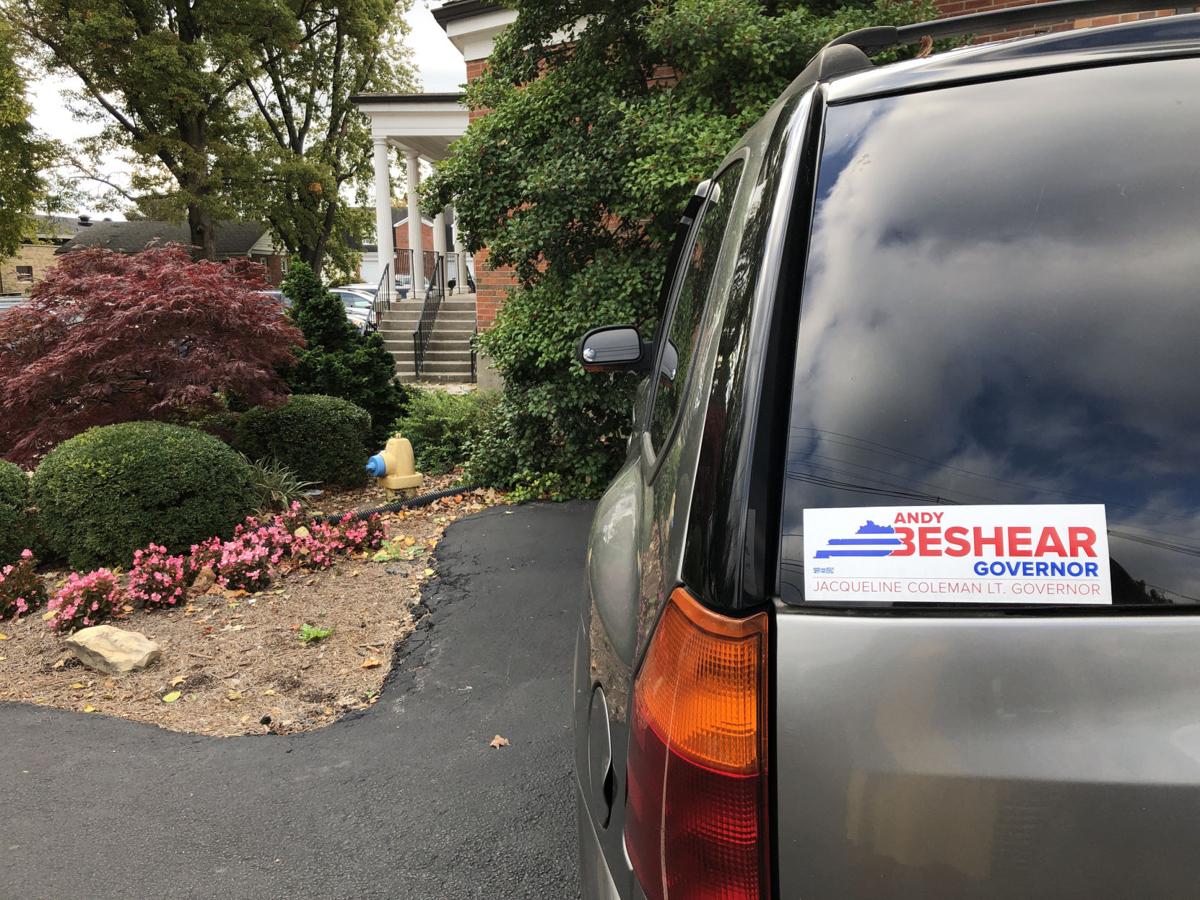 An Andy Beshear bumper sticker is on a vehicle parked in the parking lot of his church. (Photo by Bailey Vandiver) 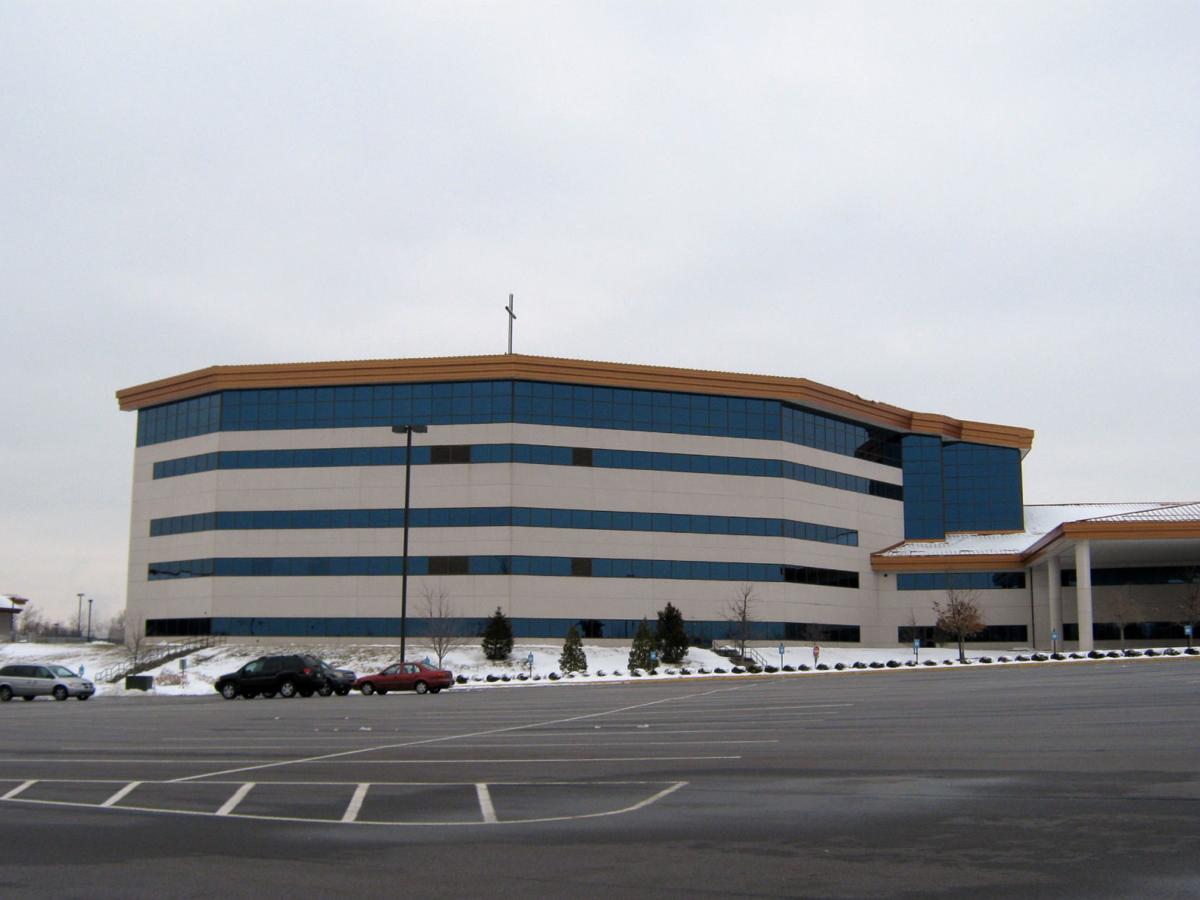 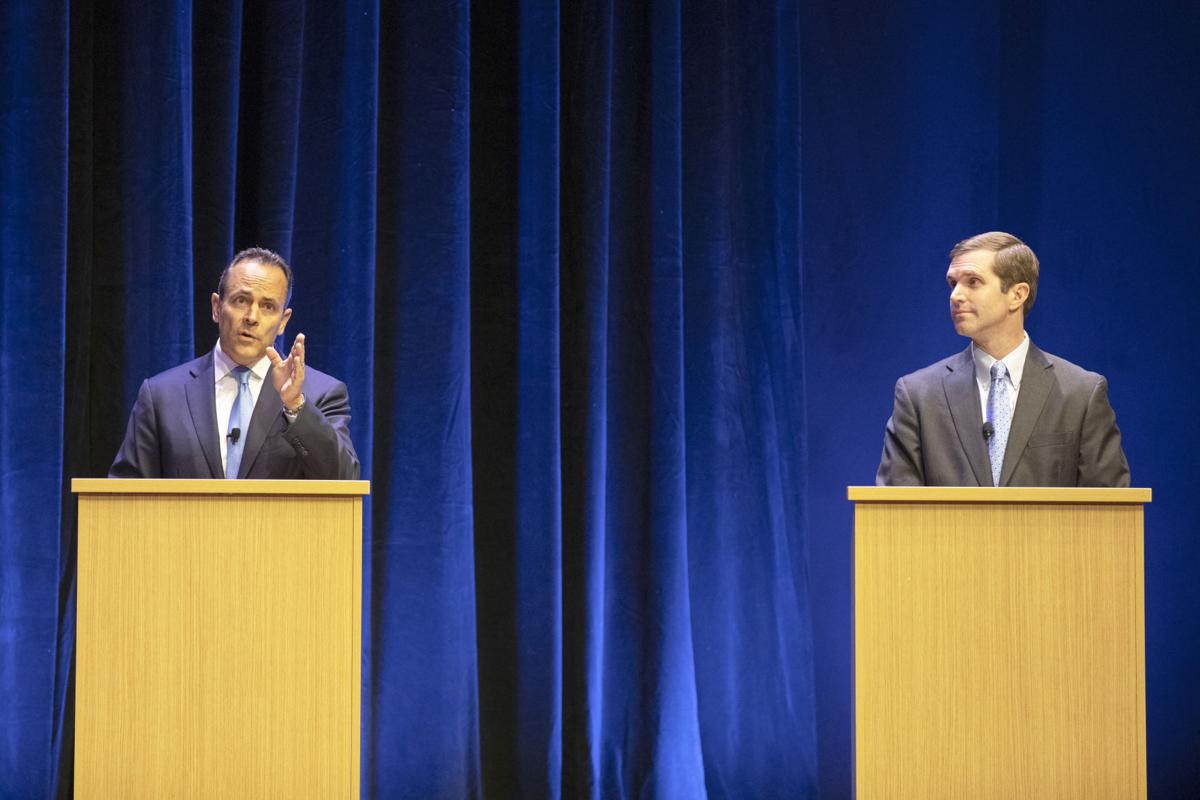 Republican Gov. Matt Bevin, left, and Democratic Attorney General Andy Beshear participate in a debate at the Singletary Center for the Arts on the University of Kentucky campus in Lexington on Oct. 15. (Ryan C. Hermens/Lexington Herald-Leader via AP, Pool) 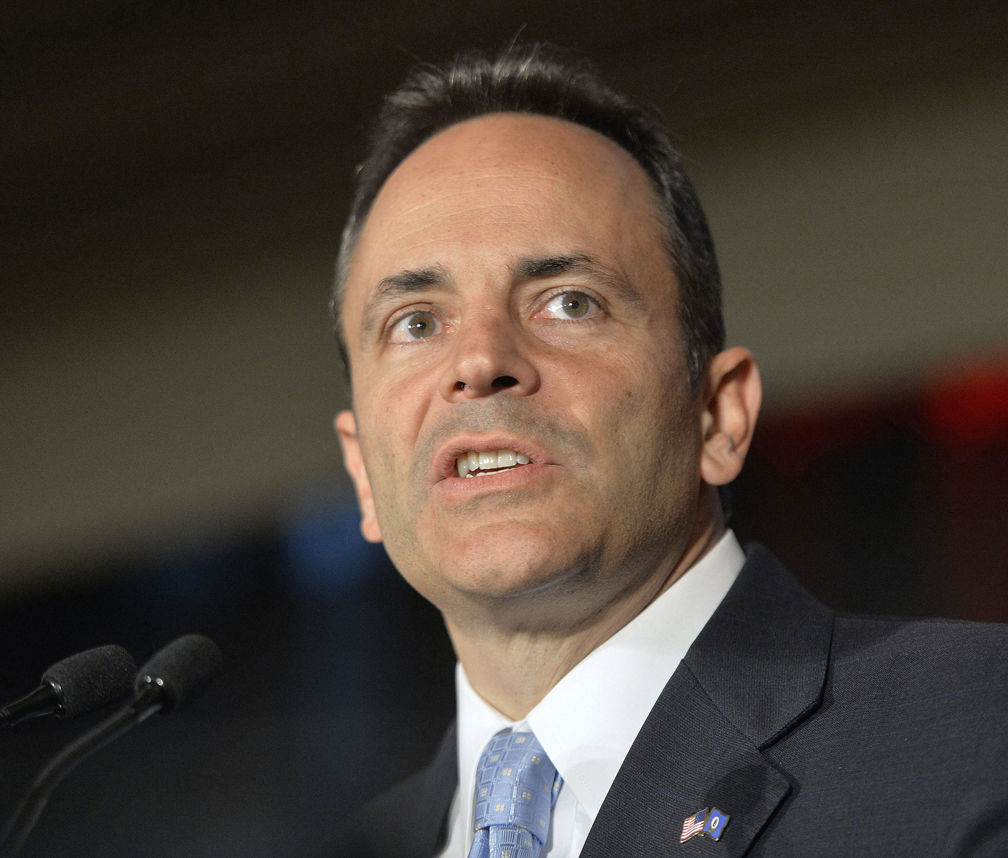 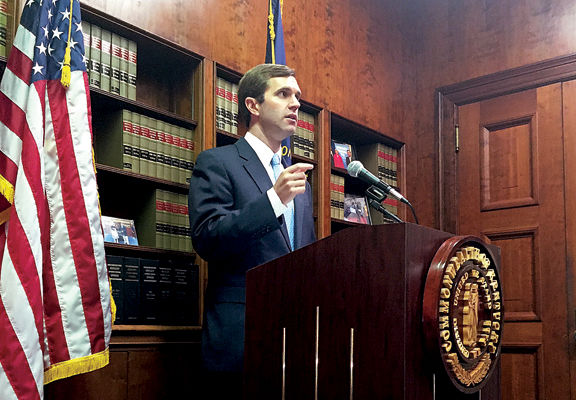 An Andy Beshear bumper sticker is on a vehicle parked in the parking lot of his church. (Photo by Bailey Vandiver)

Republican Gov. Matt Bevin, left, and Democratic Attorney General Andy Beshear participate in a debate at the Singletary Center for the Arts on the University of Kentucky campus in Lexington on Oct. 15. (Ryan C. Hermens/Lexington Herald-Leader via AP, Pool)

Both the Republican governor and the Democratic attorney general have included aspects of their personal faith in their campaign.

Beshear aired a TV ad in August saying that his grandfather and great-grandfather were Baptist preachers, which Beshear said has influenced him to help “the lost, the lonely and the left behind.” That was in response to Bevin’s criticism of Beshear’s support of abortion rights.

Bevin has often been outspoken about his Christian faith during his four years as governor, including signing a 2017 bill into law that allows Kentucky public high schools to teach literacy classes on the Bible and Hebrew scriptures. He recently promoted “Take your Bible to School Day,” and the first word in Bevin’s personal Twitter bio is “Christian.”

Beshear and his family attend Beargrass Christian Church in Louisville, where Beshear serves as a deacon, said campaign spokesperson Sam Newton. The congregation is part of the Disciples of Christ, a church that was founded by evangelicals in Kentucky in the 1830s and is now considered a mainline Protestant denomination.

Bevin’s campaign did not respond to requests for comment for this story, but Bevin is known to attend Southeast Christian Church in Louisville, an evangelical megachurch with multiple campuses in Kentucky and Indiana.

On Sunday, a State Journal reporter attended worship services at both churches, choosing times that didn’t overlap, without any knowledge of which services the Beshear and Bevin families might attend.

At Beargrass, ministers Susan Lowe, Rob Shrader and Steven Straub preached on Luke 17:11-19, in which Jesus heals 10 people who had leprosy, a skin disease. After being healed, they went on their way, but one returned to thank Jesus.

The three ministers, who were filling in because senior minister Leigh Bond was sick, said that while gratitude is important and good, Christians should be understanding of the nine lepers who failed to give thanks.

They suggested reasons the lepers may have failed to thank Jesus, including that they may have been angry, Shrader said. Here the sermon took on a social-justice tone — not crossing over into politics, but making an implicit stand on social issues.

In the time of Jesus, Shrader said, lepers were shunned, and just because they were healed of their disease did not mean they were ready to forgive all the ways they had been wronged.

Talk to friends who are women or people of color, he said, and ask if they are still angry, even at past injustices. And think of “our LGBTQ brothers and sisters,” he continued. They know what it feels like to be shunned, he said, “and if we’re really honest… the church has been one of the bad actors.”

Beargrass Christian, along with other Disciples churches, aims to be a place where all are welcome and none are shunned — “an attempt to embrace people on the full spectrum of wherever they are theologically, economically, socially, politically,” Bond said in an interview.

And that means the congregation is diverse politically, ranging from far right to far left, Bond said. This translates into support — or lack thereof — for their congregant who is running for governor. Bond estimates that about half of the churchgoers support Beshear while the other half don’t. But, he said, “I don’t know who they are, and it doesn’t come up.”

He said the Beshears have never used the church as any sort of political tool, but Bond said he is amazed at how the family continues to make church a priority “in the midst of a schedule I can only imagine.”

Bond said he sees evidence of Beshear’s faith in his campaign, and that he thinks the roots of Beshear’s desire to be in public service are rooted in his religion.

“The things that he’s promoting in terms of support for families and for folks who are in great need,” Bond said, “I think that’s all kind of driven out of his faith foundation and trying to help, to use the biblical phrase, the least of these in our society."

After service came to a close on Sunday — including a jazzy rendition of “It’s a Wonderful Life” played during communion — cars filed out of the parking lot, at least a few of which had Andy Beshear bumper stickers across the back.

About an hour later and a few miles down the road, thousands gathered at Southeast Christian Church for Sunday morning worship.

Southeast leadership declined to comment on Bevin’s membership for this story.

“Southeast Christian continues our mission of connecting people to Jesus and one another,” creative arts pastor Cary Meyer said in an emailed statement. “In keeping with our mission, we strive to keep our focus on ministry and sharing the love, grace and peace of Jesus Christ in all that we do and say, therefore we do not participate in politically aligned events or messages.”

Southeast was founded in Louisville in 1962 and is one of many large churches that are nondenominational but generally evangelical. As of 2015, Southeast was the seventh largest church in the United States, and it averages more than 10,000 attendees on Sundays at this Louisville campus alone.

It seems to be growing, if the nearly 20 babies who were dedicated and prayed over during Sunday’s service are any indication. Several people were baptized as well, in a baptismal that sits next to what looks more like a concert stage than a pulpit.

While it is certainly a modern church — head pastor Kyle Idleman’s sermon was delivered via a high-production-value video, likely because he was at another one of the campuses that day — touches of church tradition abound as well.

As the band played, images appeared on the large screen that made up the back wall of the stage — again, like a concert. Images of old, beautiful stained-glass windows flashed on the screen during the singing of “Holy Spirit” by Jesus Culture. And small wafers and little cups of grape juice are passed around for communion.

Idleman’s sermon focused on a passage in Acts — assumed by scholars to be written by Luke, also the author of the passage preached at Beargrass that morning.

Acts 2:2 uses the phrase “like the blowing of a violent wind” to describe the Holy Spirit, the third part of the trinity in Christian doctrine. If the Holy Spirit is the wind, the church should be the sail of a sailboat, Idleman said. It was a charge to his congregation to allow God to work in their lives and not to sit back idly — the church is in an “all-hands-on-deck” situation, he said.

The sailing metaphors continued: You might be tempted to stay in the harbor, Idleman said, but that’s not what you’re made for.

The Bevins may have been among the thousands of people in the room — and if they were, they likely also got stuck in the traffic jam in the parking lot as their fellow Kentuckians tried to exit the parking lot all at once.

Just a few weeks before Election Day, on Oct. 21, Bevin wecomed Christian pastors to the governor’s mansion. The Courier Journal reported that the invitation, written by revivalist and native Kentuckian Rick Curry, promised the event with Bevin would be “a very spiritual time.”

Throughout his term as governor, Bevin has been held up by some Christians as a good moral leader for Kentucky.

After taking over as governor, Bevin received many notes from “conservative Christians who at last feel represented,” according to the article.

In this election, the candidates’ faith has not entirely been left out of altercations. After Beshear’s ad about his Baptist preacher forefathers, Bevin said it was “insulting to the Baptist religion” because of Beshear’s abortion stance. “I think it’s insulting to people of Baptist faith.”

Some Bevin supporters cite their own faith when explaining their opposition to abortion.

Denise Sparks, a Somerset resident who canvasses for national anti-abortion organization Susan B. Anthony List, said that she opposes abortion because “God made babies and he loves all the babies.”

Wayne A. Gnatuk, a retired Presbyterian minister who is chair of the Kentucky Religious Coalition for Reproductive Choice, said that he is tired of the narrative that all Christians oppose abortion. That’s not true, he said.

“One of the things that makes me very angry is that the anti-choice folks are trying to make it sound like they care deeply about life from a religious perspective when they’re working to dismantle all the social safety nets that those of us who are progressive are trying to keep in place to support poor children and their families,” Gnatuk said.

Gnatuk said he sees religion at work in this election beyond just the abortion issue.

On the other side, one of the pastors who recently met with Bevin at the governor’s mansion, Richard Sams of Calhoun Baptist Church, told the Lexington Herald-Leader afterward that it was “a religious event,” but the election was mentioned, “asking God’s blessings on what is best for our state.”

Bailey Vandiver, a University of Kentucky journalism student, is covering the 2019 gubernatorial race for The State Journal.