The Frankfort Plant Board unanimously voted to award a contract in the amount of nearly $7.1 million to Smith Contractors Inc. of Lawrenceburg for the replacement of its reservoir in the Tanglewood neighborhood.

The contract price far exceeds what the board had budgeted for, with this fiscal year’s budget allotting $4.8 million for the project over two years.

“It's important to point out obviously, that this is going to be somewhat higher than what we had hoped for,” board Chairman John Cubine said. “It's a combination of things. Everything, at this point, is extremely expensive. For example, plywood has gone from about $8 to $32 and some people say it's headed to $40.

"We took competitive bids and we extended the bidding to get more bids in. I don't think there's any reason to think that in delaying it, both from a public safety standpoint and from pricing, that anything will change.”

David Billings, director of water operations for the Plant Board, pointed out that FPB had consulted with Strand Associates regarding Smith Contractors and determined that Smith was responsible in its business dealings.

Billings said that the upcoming fiscal year 2021-22 budget allocation for the whole reservoir replacement project will be $7.45 million, higher than the $7.1 million due to updated construction costs and a contingency percentage.

Board member Dawn Hale asked Adam Weber with Strand Associates, who has long been attached to the project, when construction would begin. Weber responded that groundbreaking would take place “hopefully” in early May.

Board member John Snyder asked whether the costs of the Tanglewood project might be offset by federal stimulus funds for COVID-19 recovery.

Billings responded that he wasn’t sure, but he didn’t think that those funds would apply for a couple of different reasons.

“A lot of us in the industry are expecting (the bill) will include prevailing wage rates, as well as ‘buy American’ requirements,” Billings said. “Some of the previous projects have been done that way. We don't have those in the specifications on this project. So I don't think it will.”

As for financing the project, FPB Finance Director David Denton said that the electric department will give an internal loan to the water department to cover costs. Since the price went up from the initially budgeted amount, he said he thinks that FPB could increase the loan amount by $2 million but he would be more sure about it in the coming weeks.

“If they feel it’s too much, they would look at going out on the bond market for the additional $2 million,” Denton said. “I don’t see any reason not to move forward from a budgeting standpoint.”

The reservoir's replacement was once a source of controversy among FPB, the city of Frankfort and members of the Tanglewood Neighborhood Association.

Initially, the FPB forwarded a lower-cost option for the tank's replacement, but the Tanglewood Neighborhood Association, the Frankfort-Franklin County Planning Commission and eventually the city of Frankfort dissented. The FPB sued the city over the issue.

Litigation was later dropped and the current option was agreed upon as a compromise. 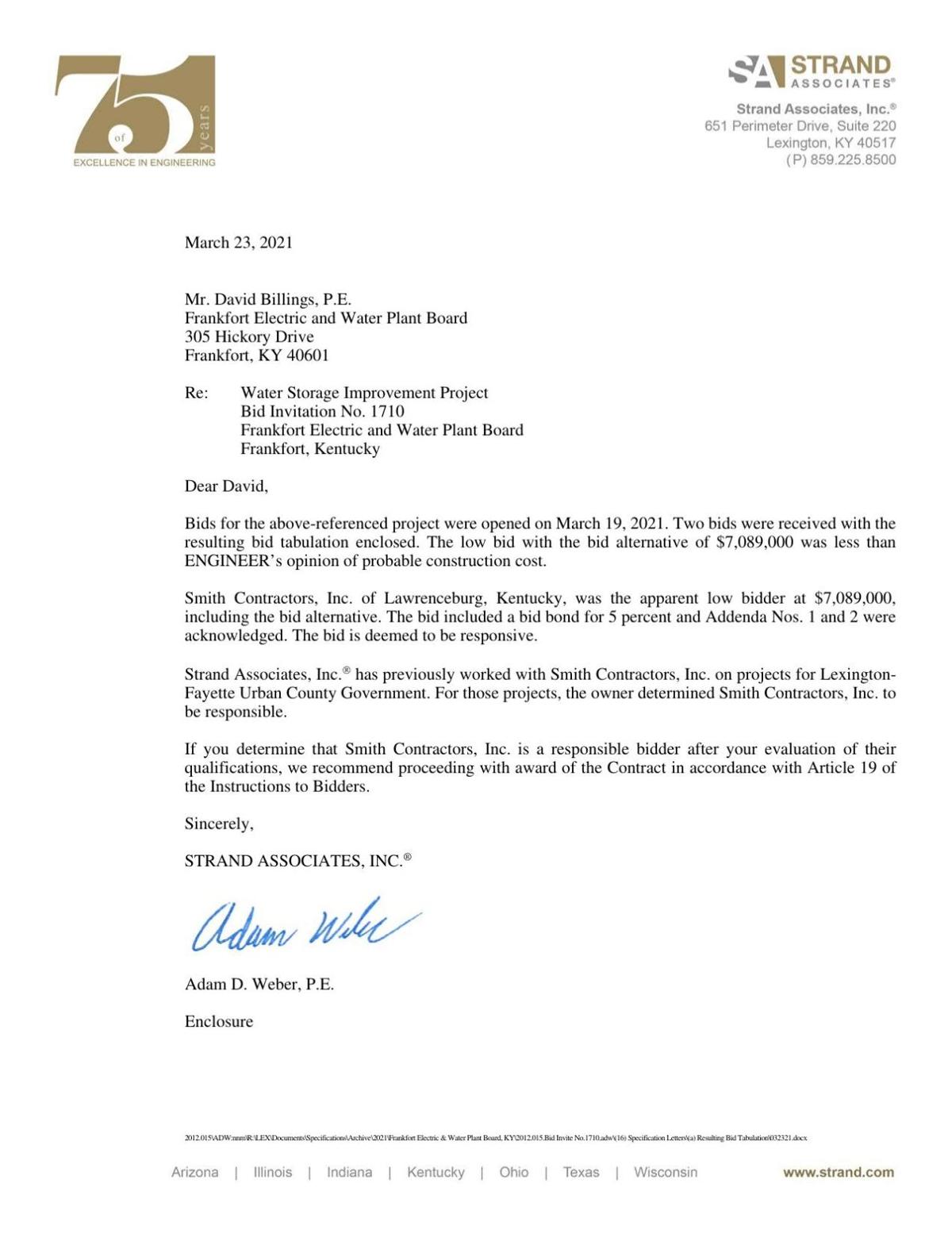 Hats off to Mr. Billings for recommending Smith Contractors and to the Board for selecting Smith. Mr Smith is a can-do guy with an excellent track record with large projects here in Franklin County. Great job FPB.

Perhaps the state journal could do a follow-up article on the details of the huge cost increase of the project since it has almost doubled?

Can the writer explain the difference between the $4 million tank and the $7 million tank?

Why did the FPB file suit and then drop it?

The Frankfort Plant Board filed suit against the city because they were interfering with their day to day administrative duties. The statute says that the Frankfort Plant Board is an independent entity, but Commissioner Roach, Bill May and The commission at the time, wouldn’t allow it. The lawsuit was in it’s final stage, and would have set precedenc from now on about the cities role in the day-to-day operations of the Frankfort Plant Board. It was filed under chairwoman Anna Marie Rosen and vice chair Walt Baldwin, but dropped under the new chairman and board of directors after May refused to renominate Rosen and Baldwin. It was part of May’s capitulation to the Tanglewood neighborhood association and the old guard, of “why can’t we all just get along” instead of being under competent leader ship. It was Bill May‘s swan song.

“The contract price far exceeds what the board had budgeted for, with this fiscal year’s budget allotting $4.8 million for the project over two years.

“It's important to point out obviously, that this is going to be somewhat higher than what we had hoped for,” board Chairman John Cubine said.”

The taxpayers of Frankfort need to thank Tanglewood Neighborhood Assoc. for its incessant whining about the preferred alternate two years ago, that would have cost just $4.1 million, for this delay that is now going to cost another $3 million and subjected our City to the risks of a catastrophic failure of our old reservoir that would have devastated our town.

And this is why Mayor May fired FPB Directors Walt Baldwin and Anna Marie Rosen… Really?