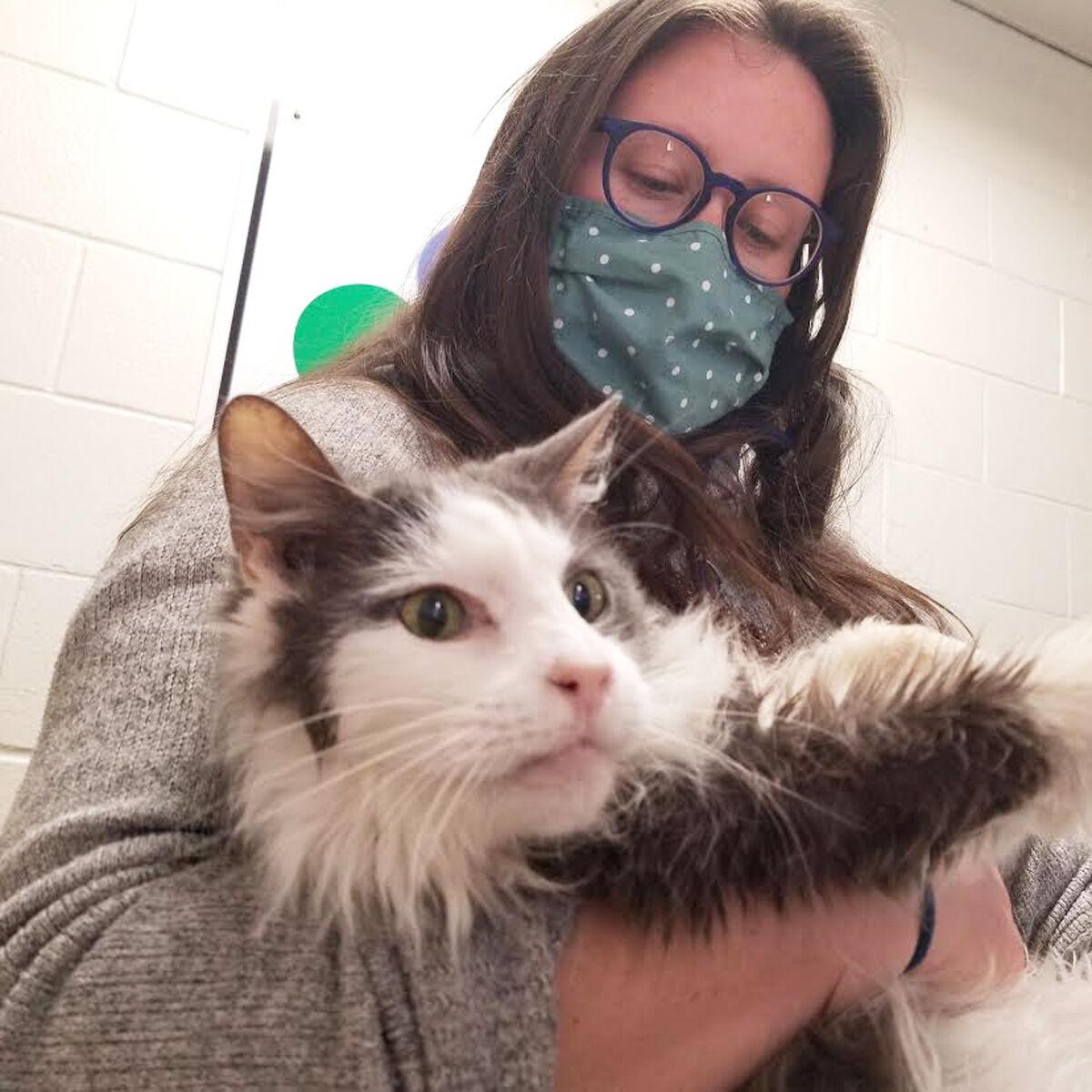 After going missing for the past 1½ years, Harvey the cat was reunited with Leesa Unger at the Franklin County Humane Society on Tuesday. (Photo submitted) 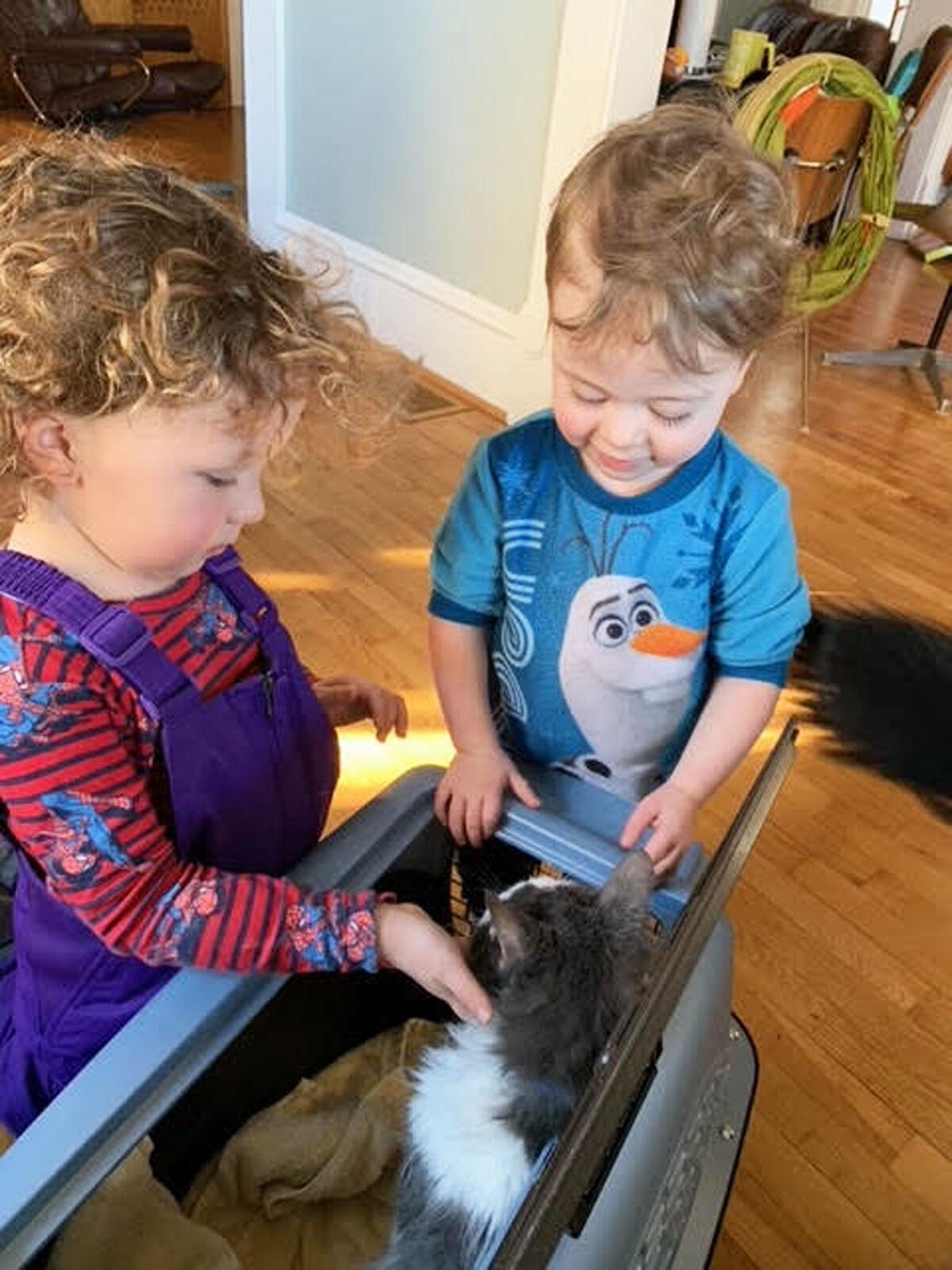 Sam Johnson, left, and Ruby Johnson were reunited with Harvey on Tuesday. The cat went missing more than a year ago and turned up at a rescue shelter in Shelbyville before being transferred to the Franklin County Humane Society over the weekend. (Photo submitted)

Last weekend the animal shelter took in Harvey from a rescue in Shelbyville and posted a photo of him on its Facebook page. Unger’s mother saw the post and texted it to her on Monday night.

“The fact that Harvey made it back to Frankfort is just pure luck,” Unger added. “If he hadn’t made it back to the Franklin County Humane Society, then we may have never seen him again.”

When Leesa and her husband, Daniel Johnson, got Harvey in 2010 through an ad on Craigslist, the cat was already full grown, declawed and neutered.

“I picked him up at a gas station from a lady,” she said. “She claimed that he was timid and stayed under her bed.”

But with the family, Harvey was quite the opposite — frisky, playful and the center of attention.

Before he went missing more than 1½ years ago, Harvey usually roamed outside during the day — never straying far from their downtown Frankfort home.

“He loved to be around us and I was surprised when he didn’t make it inside one night,” she said, adding that he’s a loud, vocal cat and when he didn't come she knew something was wrong.

But Unger never stopped thinking about Harvey and it bothered her that he simply disappeared.

“I would wake up thinking about him randomly in the middle of the night and I often thought I heard his meow,” she remarked.

She would scroll through photos of shelter cats online and, through it all, believed he was still alive.

“A cat like Harvey doesn’t give up. He is tough and ornery.”

How he made his way to Shelbyville is an answer the family will likely never know, and it’s a question that is going to drive Unger nuts.

“It’s so wild,” she said. “He was gone for a year and a half and as soon as I picked him up he purred and acted like no time had passed.”

Lowary confirmed that the humane society has microchipped Harvey in case he gets traveling feet again. It’s a procedure that Unger recommends everyone do for their pets.

Harvey got a relatively clean bill of health from a local veterinarian on Wednesday and appears to relatively healthy for a cat his age.

“He came home missing some teeth, had fleas and was a bit dirty, but he is doing well,” Unger said.

In the meantime, Harvey is getting reacquainted with his housemates — the family's two young children, Sam and Ruby, and two rescue pups, Leroy Jenkins, a German shepherd mix, and Ernie Gruntfeld, an Aussie shepherd mix.

“When Harvey went missing our daughter, Ruby, was only 3 months old and our son, Sam, was almost 2,” Unger remarked, adding that the kids are excited to have a cat in the house.

“Harvey is probably wondering where all these extra little people came from!”

Unger credited the humane society with reuniting the family with their long lost pet and encourages local folks to donate to the new animal shelter fund at https://www.fchsanimals.org/donate.html

Out on the farm , I’ve noticed that as cats get older they are prone to climb up into the motor compartments of trucks and cars - especially if a cold snap hits , they seek warmth emitting from a source like a combustion engine that’s just been turned off. Also they will seek to escape from a curious pup , aggressive dog or even a cat squabble in the under carriage and motor compartment of autos. Kittens will at times “ ride “ too! People also like to pick up pets on a “whim ” if they see one that catches their eye! I’d guess that cat didn’t walk to Shelbyville.