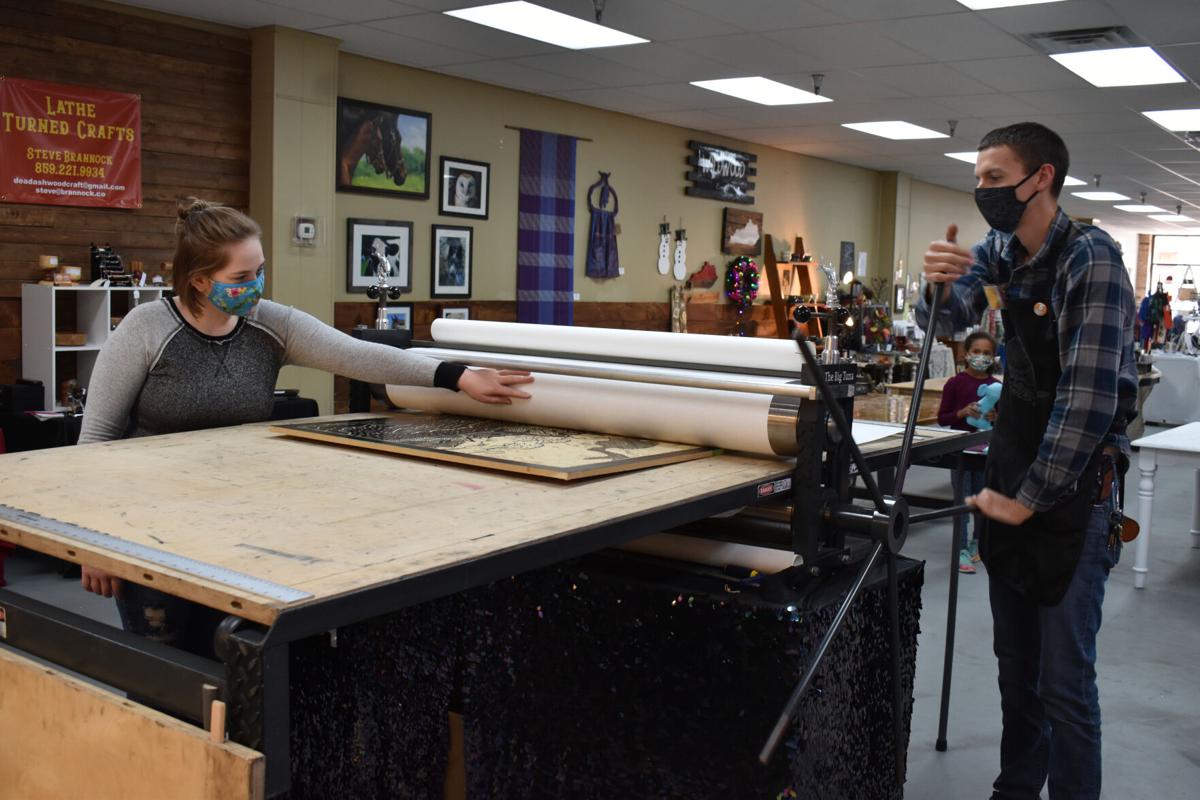 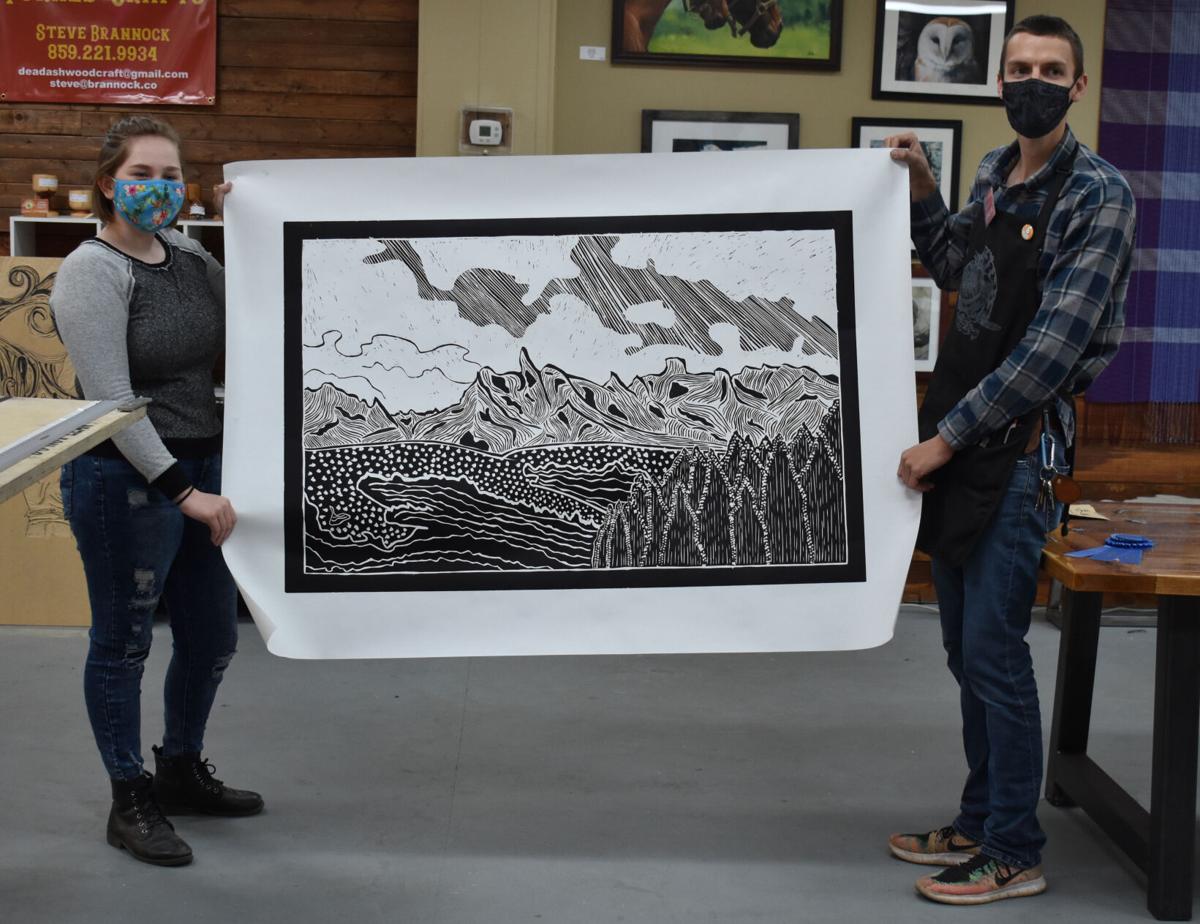 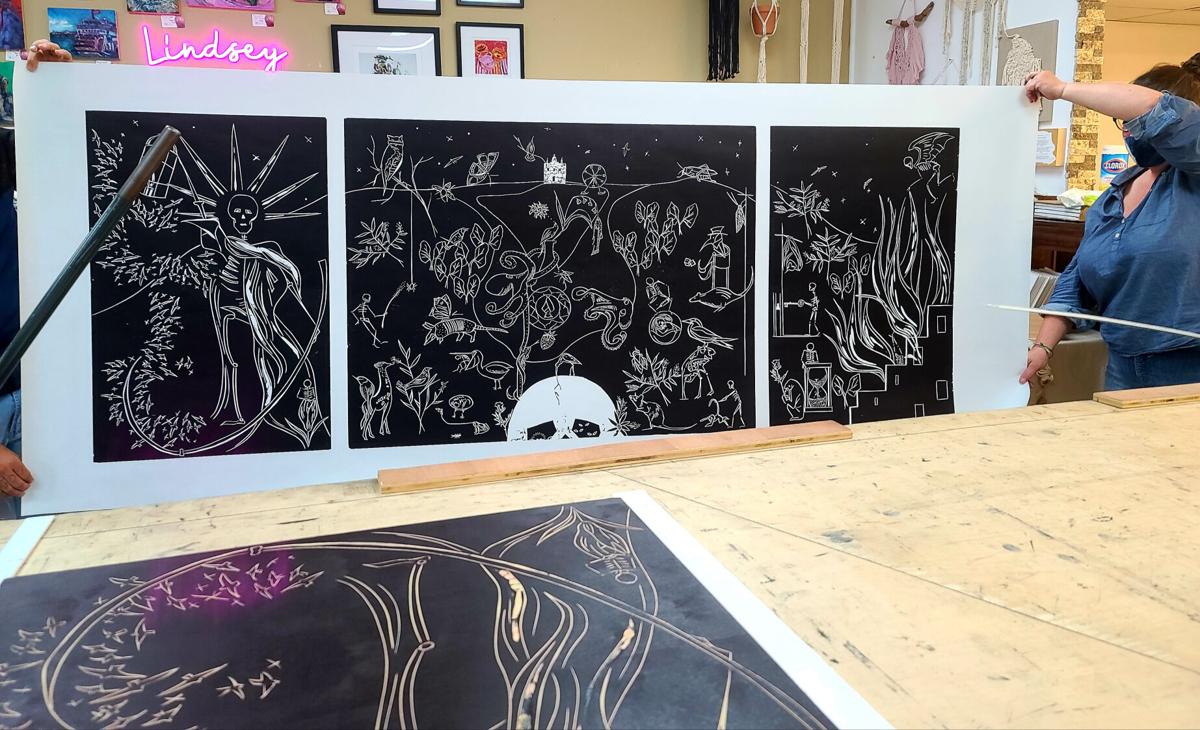 Racquel Keller displays the three-panel woodblock print she made Saturday at Silo Ridge Makers Market. The print is based on Hieronymus Bosch's "Garden of Earthly Delights." (Photo submitted)

Racquel Keller displays the three-panel woodblock print she made Saturday at Silo Ridge Makers Market. The print is based on Hieronymus Bosch's "Garden of Earthly Delights." (Photo submitted)

Lyell Castonguay and Carand Burnet, co-owners of BIG INK Prints in New Hampshire, travel around the country with their press, named the Big Tuna, so artists can produce prints of their large scale, hand-carved woodblocks.

This weekend they were in Frankfort, where 13 artists had their woodblocks printed onto paper.

The event was hosted by Otrera Arts and Roaming Studio and took place at Silo Ridge Makers Market.

“We started planning last year, in September or October, but the pandemic changed things for us,” said Toby Penney, director of Otrera Arts and owner of Roaming Studio.

“There were going to be 24 artists, but because of COVID some dropped off their wood blocks to be printed, and others decided not to participate at this time.”

All but one of the 13 artists who made prints have been involved with the Frankfort Arts Alliance.

Racquel Keller, of Maryland, was the exception. Otrera Arts and Roaming Studio hosted her as a guest artist in residence through the end of the weekend.

“When they said this was happening, I said, ‘oh, yes,’” she said. “All my Christmas gifts last year were some variation on wood carvings.”

Keller’s work was a three-panel piece based on Hieronymus Bosch’s Garden of Earthly Delights, a triptych oil painting on oak panel, but with a COVID-related basis.

Other changes were an owl that was blindfolded, and another owl Keller turned into a bat.

In printing woodblocks, artists carve the image on the blocks. What they carve out will be white on the print.

“We had quite a few artists that were first-timers,” Castonguay said. “If you can draw, if you like to draw, you can do this.”

BIG INK goes to about 20 events a year, mostly at museums and art centers.

“If we get a group of artists that wants us to come, we can get there,” Castonguay said.

BIG INK opened in 2012, and Castonguay and Burnet began traveling the country with Big Tuna in 2016. This weekend was their first time in Frankfort.

Jody Jacques, part owner of Broadway Clay, has been an art teacher at Good Shepherd, Capital Day and Second Street. She signed up her daughter, Kaja Jacques, for the event.

“She was drawing potato people when she was like 18 months old,” Jody Jacques said. “She’s always loved working with markers. I thought there was something wrong with her brothers because they didn’t draw potato people until they were 3.”

Kaja, a sophomore at Franklin County, carved a landscape on her woodblock.

While her mother was the one who signed her up for the event, Kaja liked the experience.

“I enjoy it a lot,” she said. “I love trying something new.”

“Your best quality is you work with something until you figure it out,” her mother told her. “You don’t quit. She has amazing ability to take in information and turn it into something.”

Kaja can add woodblock printing to her art repertoire.

“I do a little bit of everything,” she said. “I do a lot of fiber art and a lot of sketching and character creation. I enjoy drawing people, and I sew and knit.

“I think I’ll hang some up,” she said about her prints. “It might be a birthday gift for my dad. His birthday is soon, and I’ll put some in my portfolio for college. I want to go into some sort of creative field.”

I worked at this newspaper for years, and got quite used to reading film negatives whether upside down, mirrored or flipped, and can appreciate the work needed to carve, by hand, a mirror image of the art being created. Awesome job!