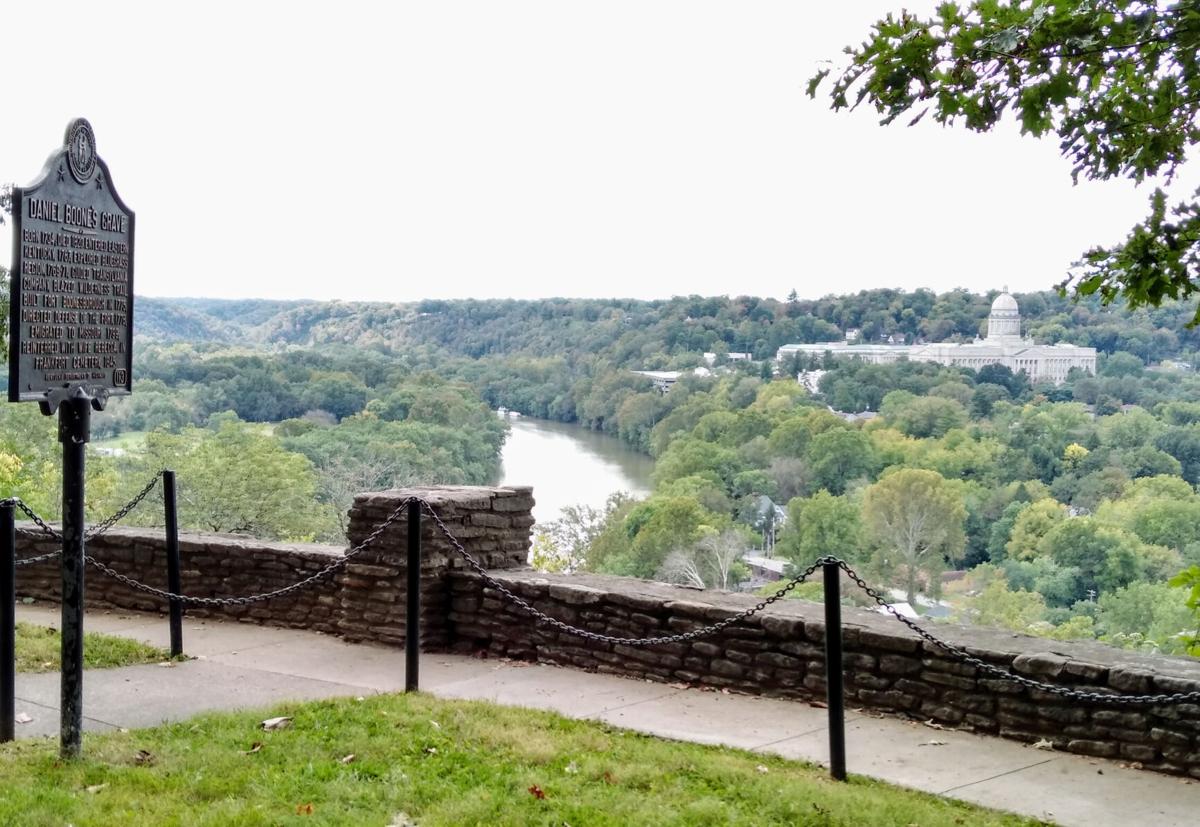 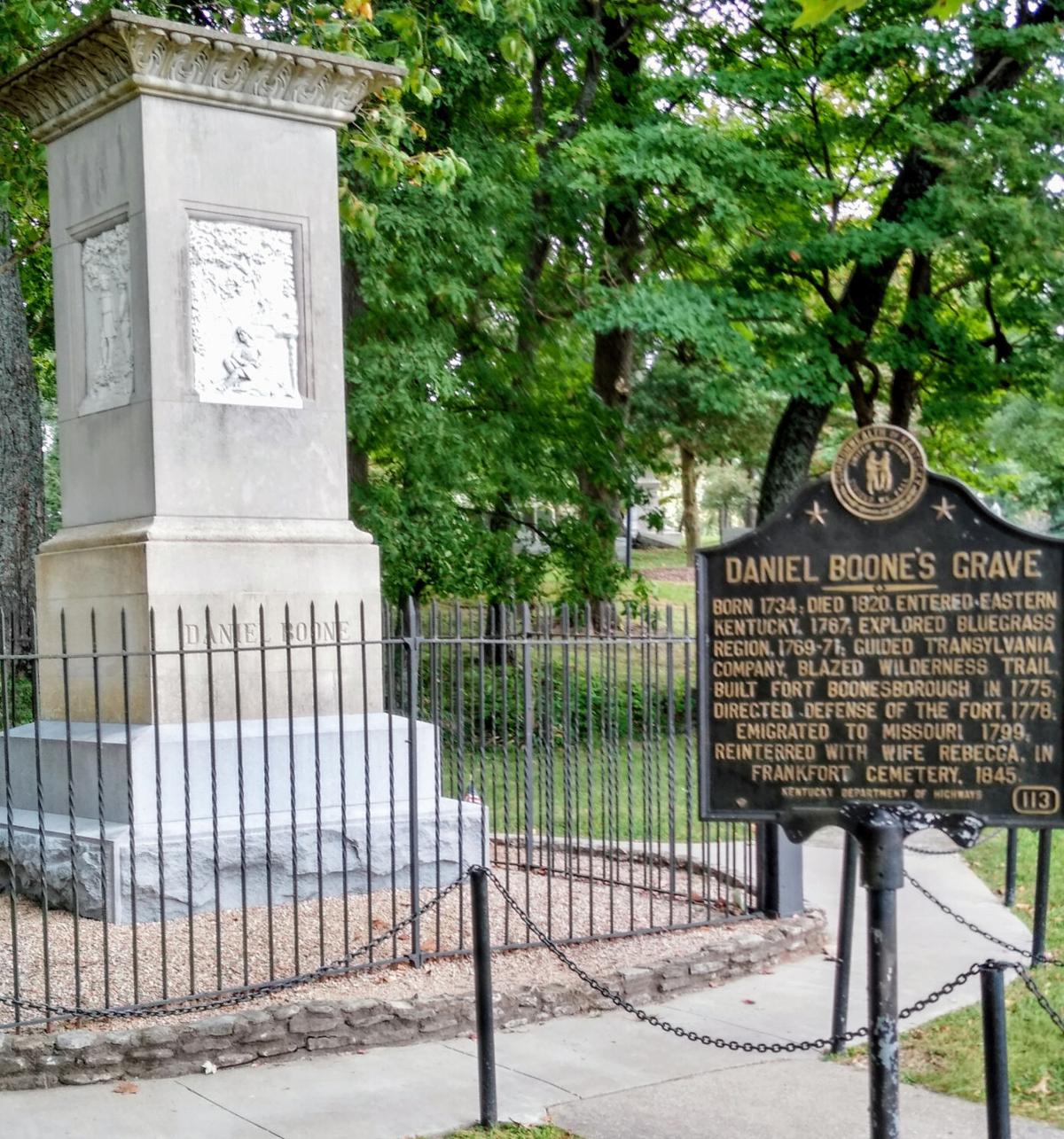 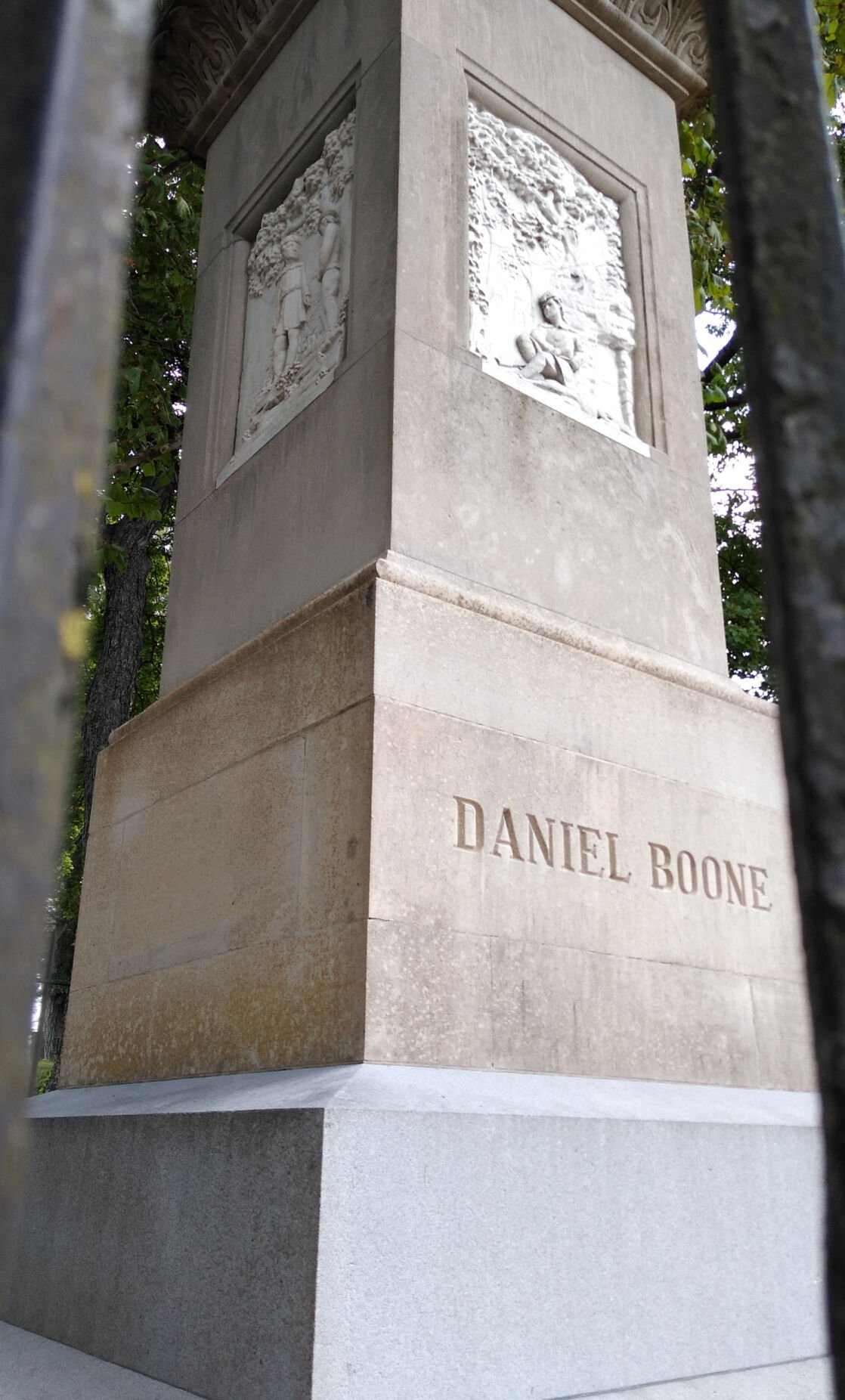 Daniel Boone's burial site in Frankfort Cemetery is one of the city's most popular tourist attractions. (Chanda Veno) 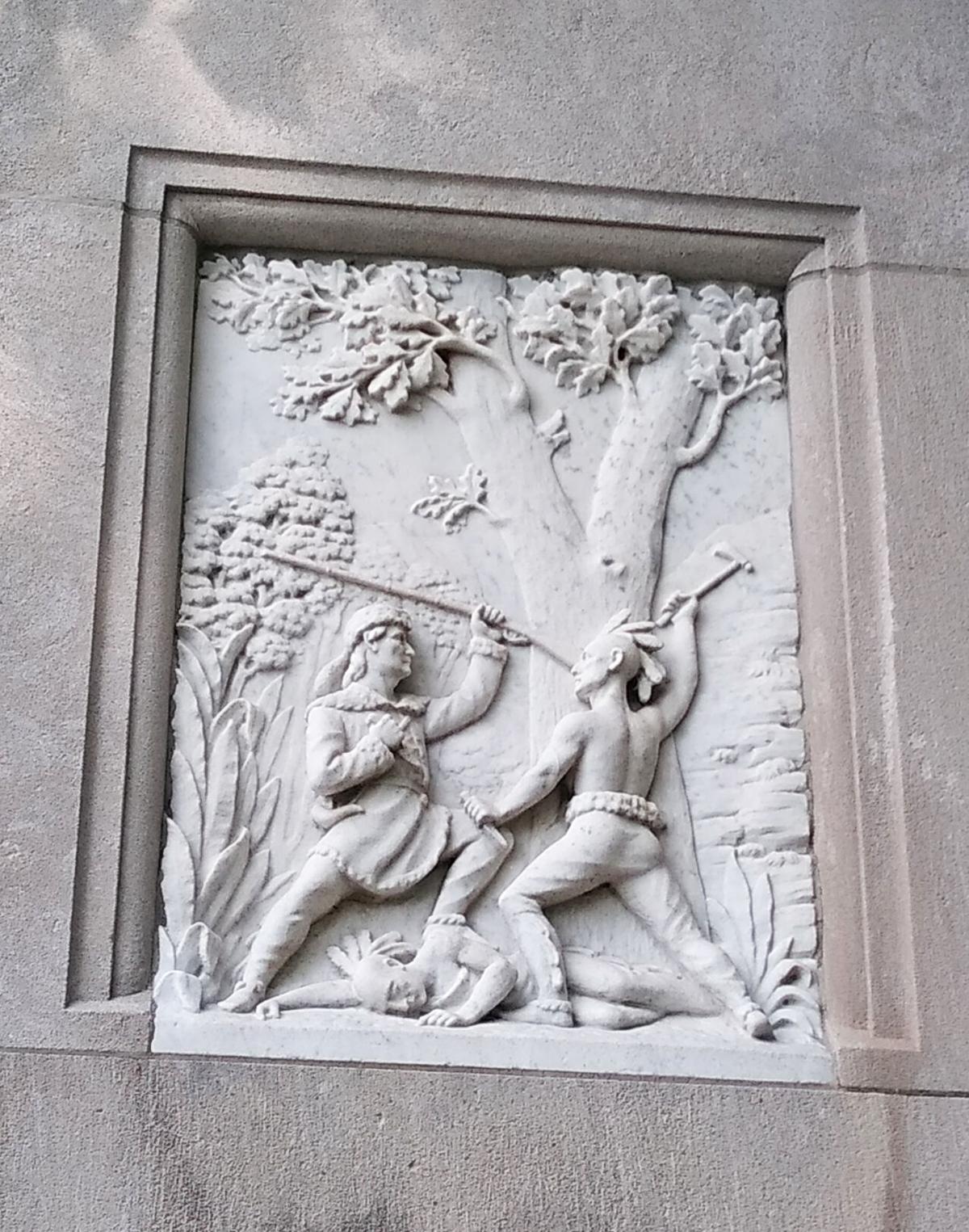 That is the opening verse of country music artist and Taylorsville native J.D. Shelburne’s “Straight From Kentucky,” a song that pays homage to numerous Bluegrass State icons.

For the launch of the 2020 Kentucky Visitor’s Guide earlier this year, Shelburne performed the song in the Capitol Rotunda — not far from the scenic spot in Frankfort Cemetery where a monument marks Boone’s remains.

But some are skeptical about whether the interred bones are actually those of the iconic explorer.

Boone, an American frontiersman most notably known for his exploration and settlement of what is now Kentucky, died 200 years ago today on Sept. 26, 1820, of natural causes at the age of 85.

He was originally laid to rest next to his wife, Rebecca, in a not-very-well-marked grave on his son Nathan’s farm near present-day Marthasville, Missouri.

But in 1845, the Boones’ remains were disinterred and moved to Frankfort Cemetery, which at the time was looking to become the second incorporated memorial park in the country.

Local historian Russ Hatter said the idea for the Frankfort Cemetery was that of local judge Mason Brown, who visited and noted the beauty of the Mount Auburn Cemetery in Cambridge, Massachusetts, and wanted to do the same thing here.

“And so the family said if we can come up with somebody famous it might help bring attention to our cemetery,” he explained in a 2014 KET interview.

“Apparently they were in such a hurry to do this, and I wonder if it was because the state of Missouri was like, ‘Why are you doing this? We should have Daniel Boone here in our state.’ ”

According to the Frankfort Cemetery website, the Boones’ remains were moved here “with great ceremony” and reburied in a spot overlooking the Kentucky River and capital city. They were the first to be interred at the cemetery in September 1845.

The gravesite continues to be one of the city’s top tourist attractions. On Saturday, visitors from Gallatin, Jefferson, Jessamine and Grant counties were checking out the Boone plot.

A father and son made the trip from Whitley County. They had planned to stop by when they last visited Frankfort about a month ago but didn’t have an opportunity.

Both were surprised that it was the 200th anniversary of Boone’s death because his birth and death dates are not listed on the monument over his grave or the nearby historic marker.

The monument, which was built by John Haley in 1860, features four marble panels depicting scenes from Daniel and Rebecca’s life that were added two years later. During the Civil War the panels were vandalized and only one of the original panels still exists. It is on display at Waveland State Historic Site in Lexington.

However, some, including the Friends of Daniel Boone’s Burial Site in Missouri, are skeptical about whether the remains in the Frankfort Cemetery are actually the Boones’.

Black slaves had also been buried nearby, so it is possible the wrong remains were mistakenly removed from the crowded Missouri cemetery.

“It’s one of those great Kentucky-Missouri mysteries and people are fascinated by it,” Sara Elliott, a former curator at the Kentucky History Center and current executive director at Liberty Hall Historic Site and park manager at Waveland State Historic Site, told KET.

The controversy started with a cast made of plaster of paris of Daniel Boone’s skull before he and Rebecca were reburied in Frankfort.

In the early 1980s, the Kentucky state medical examiner made the statement that he thought it might be an African American skull rather than Daniel Boone’s.

“That kinda sparked an interest in whether or not they had actually exhumed Daniel Boone or was it a slave that had been buried near him,” Elliott added.

A decade later Emily Craig, the then-state medical examiner who was also an anthropologist, inspected the cast and could not determine the race of the skull, only that it was male.

Today, both the Frankfort Cemetery and the Old Bryan Farm in Missouri claim to have Boone’s remains.

“We do know that Daniel Boone is dead. He died in 1820. He’s buried somewhere — what a beautiful place to be right here in Frankfort, Kentucky, overlooking the Kentucky River,” Hatter stated.

Krystal Jackson, of Nicholasville, who was visiting the Boones’ plot on Saturday, agreed.

“It’s a cool thing to see and a beautiful day to be here.”

We attended the 200th Bicentennial Remembrance of Boone's death in Missouri this past weekend. I feel certain Boone is here in Frankfort after attending this event. Scholar, Ted Franklin Belue, was there discussing where Boone is buried and presenting his findings and new book "Finding Daniel Boone: His Last Days in Missouri and the Strange Fate of his Remains". The author layed out the evidence and the facts. Check out the book, lot of Frankfort subjects and information included in it.

Thanks for that information! I’ll have to read that one to about ol’ Dan! I guess in the long run , it’s good for both states for tourism and celebrating a “ pioneer” that blazed a trail for settlers that lived in Ky and Ms isn’t bad. One could look at White settlers in different perspectives( I’m sure native Americans did)- they brought axes , saws and guns , not as naturalist or environmentalist but to change the natural habitat into something they deemed necessary for survival. If the locals didn’t like their axes or saws then the “settlers “ would use their guns! Well, I think it would be quite a sight if we could go back and see Ky in its natural “ wilderness “ form ! Don’t get me wrong ! I like a permanent structure to abide in and three easy meals a day on the table ! Can humanity continue to change our habitat and protect our environment for future generations?

As a distant cousin of Dan’l (verified by genetic testing), I like to think that his remains are here in the Frankfort Cemetery, which is near my Dad’s grave.

From the coonskin cap on top of ol’ Dan - To the the heel of his rawhide shoe; the rippin’est, roarin’est, fightin’est man- The frontier ever knew!

On TV. Really, he was a short little baldheaded guy who left his wife and family alone to fend for themselves in the wilderness for 5-6 months at a time, while he hung out with his buds on “hunting trips“!

And he could run fast - and for a reason! To save his hide!

I’ve read every history book and biography of Daniel Boone while I was a child and an adult that’s been written I believe! That last one - can’t remember the Author, maybe 10 - 15 years ago? was the last one written and a good one! We all grew up dreaming of being Daniel Boone watching all the shows ! ( shame they didn’t film them in Ky and not California and Utah!)

30 years ago , more or less , I was in Florida one winter fishing. I met three fellows from Missouri in a gas station and commented that Daniel Boone was buried in Frankfort , mentioning that he was thought to still be buried in Missouri. They assured me very seriously that he was still in Missouri! Needless to say with three of them and one of me , I didn’t further the conversation , and later I questioned myself as to why I even brought it up! I guess I expected them to see the warped humor I did in where Daniel Boone really was!