In a 5-2 vote, the Frankfort-Franklin County Planning Commission voted Thursday night to send a recommendation to the Franklin County Fiscal Court to approve a zoning change for about 85 acres at 690 Duncan Road.

Ron Tierney, a Winchester developer who owns Tierney Storage, requested that the land be rezoned from agricultural to industrial. Residents in the area opposed the change for various reasons, including the demolition of a historic house that was on the farm.

According to the commission’s bylaws, only members who were present during the public testimony or reviewed an official record of it were allowed to vote. So, seven commissioners— Sherron Jackson, David Boggs, Patti Cross, Keith Lee, Tim Luscher, James Terrell and Kate Bennett — of the 11 on the board cast votes on motions related to the application. Commissioners Charles Stewart, Russell Wright, Jim Nickell and Joyce Honaker were ineligible to vote. Nickell was also absent on Thursday.

“Mr. Tierney, the commission has voted in favor of sending a recommendation to the fiscal court that the zone map amendment request be granted,” Jackson, the chairman of the board, said after the vote. At that point, a Duncan Road resident walked out of the room and said, “Bulls---.”

Jackson said that those who oppose the recommendation can appeal it in Franklin County Circuit Court.

Tierney said following the meeting that he felt the outcome was “very positive,” and declined to speak further.

“It is representative of what the facts were presented to them. I believe the next step that as it goes to the fiscal court, once again the facts presented will provide for a positive vote,” she said.

Susan Goddard, a neighboring property owner and a co-director of the Duncan Road-Hilltop Meadows Association, said the next step for residents is to go to fiscal court.

“The process was chaotic and disregarded protocol and the public,” said Chris Schimmoeller, the president of Envision Franklin County. The community advocacy group has repeatedly spoken against the zone change among other actions Tierney has taken on the property.

At the last commission meeting on Jan. 9, various parties that would be affected by the change, including Tierney and his lawyer, Planning and Zoning Staff, Bradshaw on behalf of KCDC, Duncan Road residents and more, gave public testimony regarding the proposal.

Prior to the Thursday meeting, parties were allowed to submit findings of fact to Franklin County Planning and Zoning staff by Jan. 30, which was decided at the Jan. 9 meeting. Staff gave The State Journal documents submitted by KCDC, Envision Franklin County, a lawyer representing Tierney Storage and the Franklin County Trust for Historic Preservation. Goddard provided The State Journal with findings of fact submitted by a lawyer representing the Duncan Road-Hilltop Meadows Association, but a copy was not provided by Planning and Zoning staff.

During the meeting, the commissioners accepted a copy of the findings from Goddard and entered them into the record. County Planning and Zoning Director Robert Hewitt said that the findings from the neighborhood associations’ lawyer were submitted a minute after his office closed on Jan. 30, thus were not included in the packet. Goddard showed an email from Hewitt acknowledging receipt of the letter.

The commission took a brief recess to review the findings Thursday night before entering them into the record. Goddard called it “pathetic” because citizens did not have a chance to review the document before the vote. 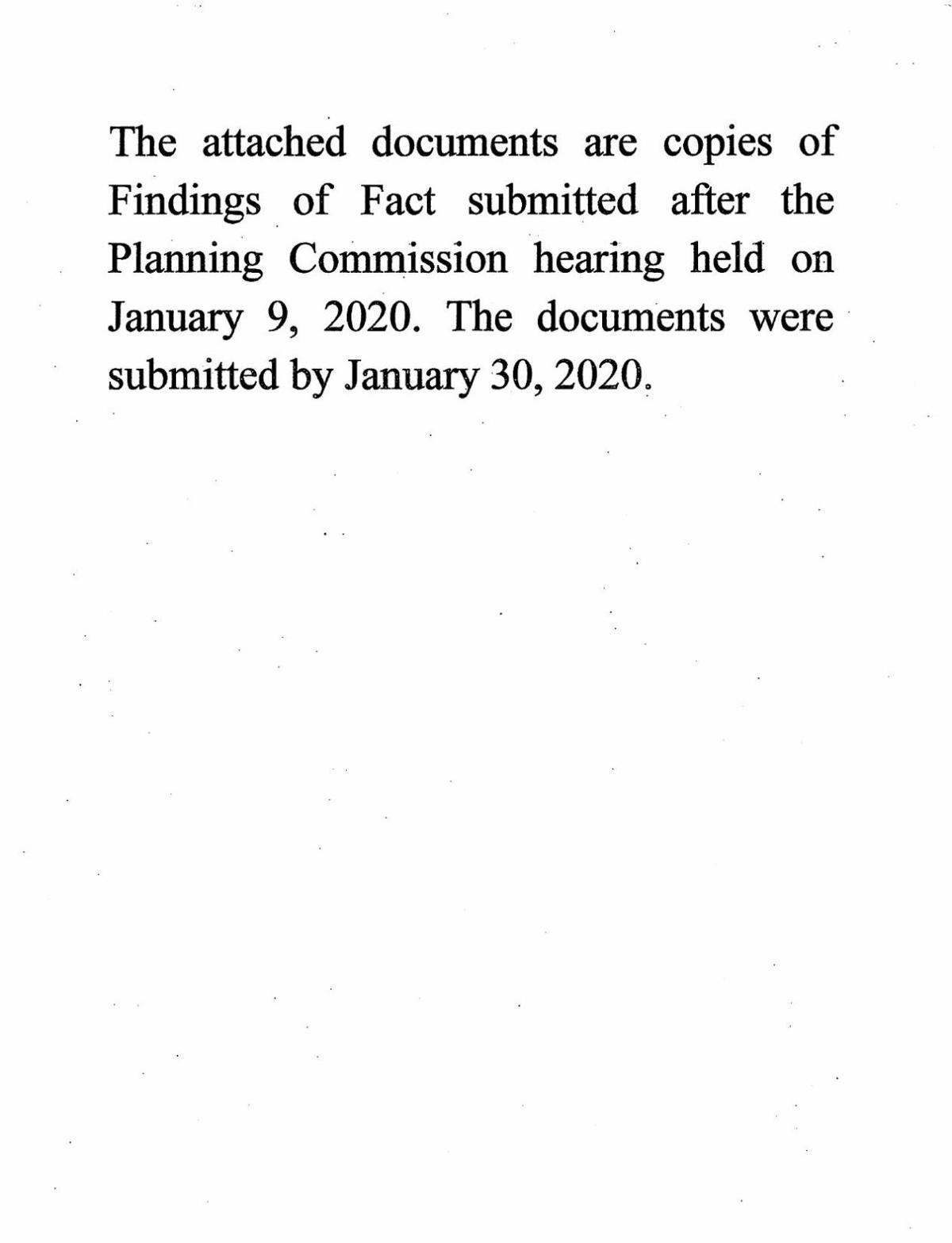 John Rompf Jr., an attorney for Tierney, said in his findings of fact that the zoning request is compliant with the 2016 Frankfort-Franklin County Comprehensive Plan, as the Duncan Road property is designated as an “employment center.”

His submission contends that granting the zoning change would make the property “consistent with existing activities in the general area of the property within Franklin County” and would have an impact on the development of “schools, parks and local government functions due to the increase in the tax base as well as employment opportunities.”

Bradshaw previously told The State Journal that Tierney plans for the property to be an industrial park.

On behalf of KCDC, Bradshaw sent an email to Hewitt that was included in the findings of fact given to the commissioners. She refuted claims made at the Jan. 9 meeting, among them that Tierney had “no skin in the game.”

“In reality, Mr. Tierney probably has more skin in the game than the total of that room. He has purchased over $20M worth of buildings and property in Franklin County and added to the value of each of those properties by building new buildings, upgrading abandoned buildings, providing infrastructure and JOBS,” she wrote.

She said that Tierney has done nothing outside of the limitations of the Frankfort-Franklin County Planning and Zoning restrictions or the county’s Comprehensive Land Use Plan.

Schimmoeller wrote Envision Franklin County’s findings of fact. The letter argues that “no analysis has been offered that this zone change would further community good” and that Tierney Storage “has ignored county and state rules that are in place” by not acquiring a proper land disturbance permit from the county before beginning grade work, disturbing over an acre of land which violated a county permit, and not acquiring an encroachment permit from the Kentucky Transportation Cabinet before constructing a road entrance on the property.

According to documents from KYTC obtained via an open records request, the cabinet issued a notice of an illegal encroachment to Tierney Storage on Jan. 15, about six days after the January planning commission meeting. The notice gave Tierney 30 days to remedy the encroachment.

“There was no analysis presented that this is an economically productive development proposal. No analysis of increased tax revenue compared to increase services/infrastructure cost was presented to demonstrate this,” Schimmoeller wrote.

Natalie Wilkerson, board president of the Franklin County Trust for Historic Preservation, submitted that organization's findings of fact, saying that the group strongly opposes the requested zone change given the property’s historical significance. The property is on the National Register for Historic Places.

“According to the National Register, the significance of this property not only lies within the historic house that has been demolished, but in the agricultural fields that make up the acreage of this site,” Wilkerson said. 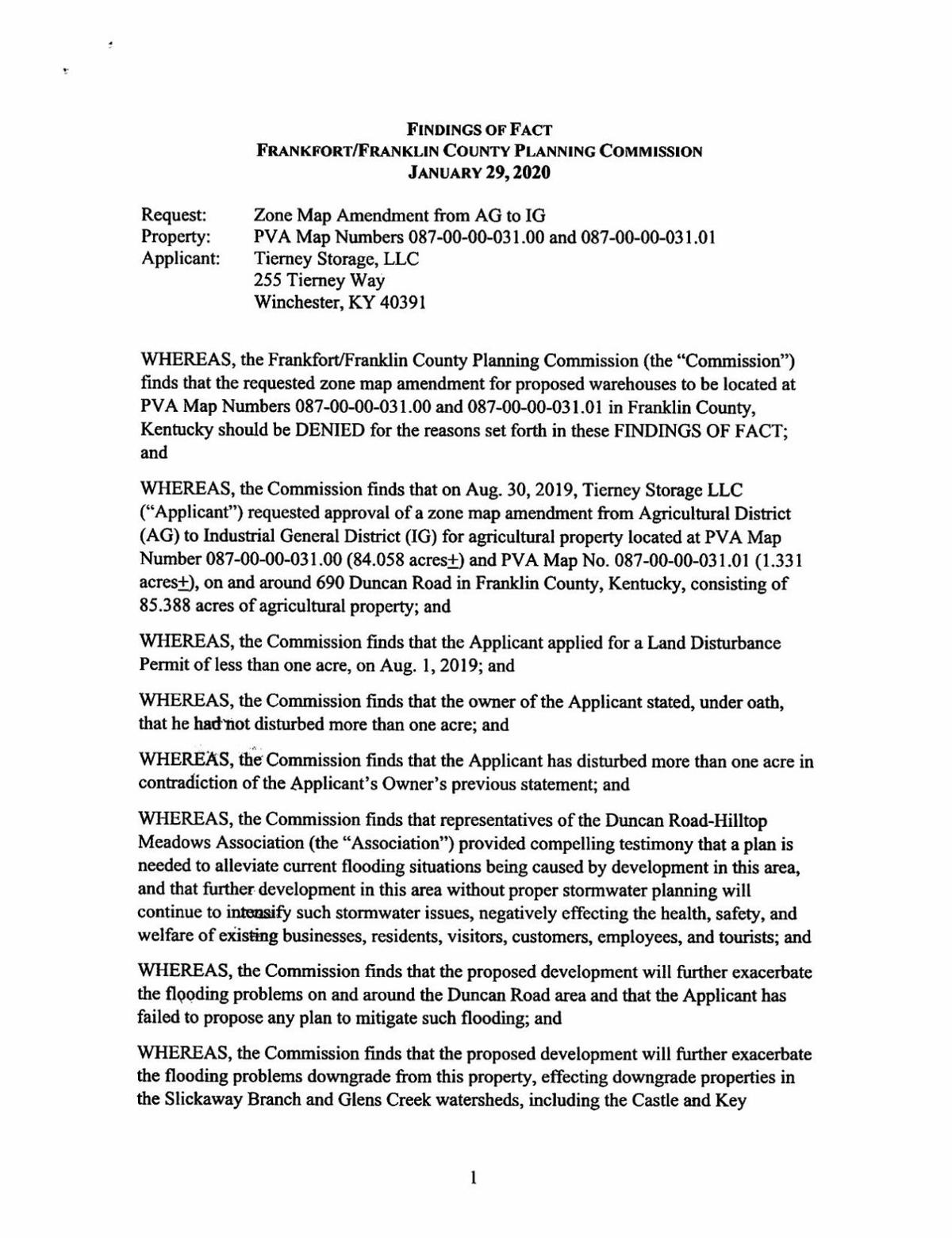 She recalled that Tierney last year razed the historic Blanton-Crutcher House and surrounding landscape, which includes a cemetery, without a permit.

“We presume that the intent of this exemption was to enable rural landowners to care for their properties outside the bounds of local jurisdiction, as much of Franklin County lies outside of our urban and suburban core. When an industrial developer uses it for demolition on a rural property and then turns right around and requests a zoning change it becomes clear that a misappropriation of the exemption occurred in a deceitful manner.”

Randy Strobo, the attorney for the Duncan Road-Hilltop Meadows Association, said in the findings of fact he submitted that the zoning change should be denied. Citing testimony provided by neighbors, he argued that more than one acre of land on 690 Duncan Road had been disturbed, flooding problems caused by existing development “will further exacerbate” with the proposed development and that the McCracken Pike area is an “already stressed area” with notable tourism.

So, the P&Z Commission, the Franklin County Fiscal Court, the County Attorney, The State Journal, and any other government entity, are just going to let Mr. Tyranny walk on his egregious knowing and willful violations of constructing without a permit? Why? WWTD? Could it be that his complete disregard for the law was something Trump would have (has) done? Trump and Tyranny are often seem together in public, and because it is daylight, that makes it OK? Or that whatever Trump does, even when Tyranny is right there too, is OK, because AG Barr says so?

McGrath takes on Booker and Broihier in only scheduled Democratic U.S. Senate debate