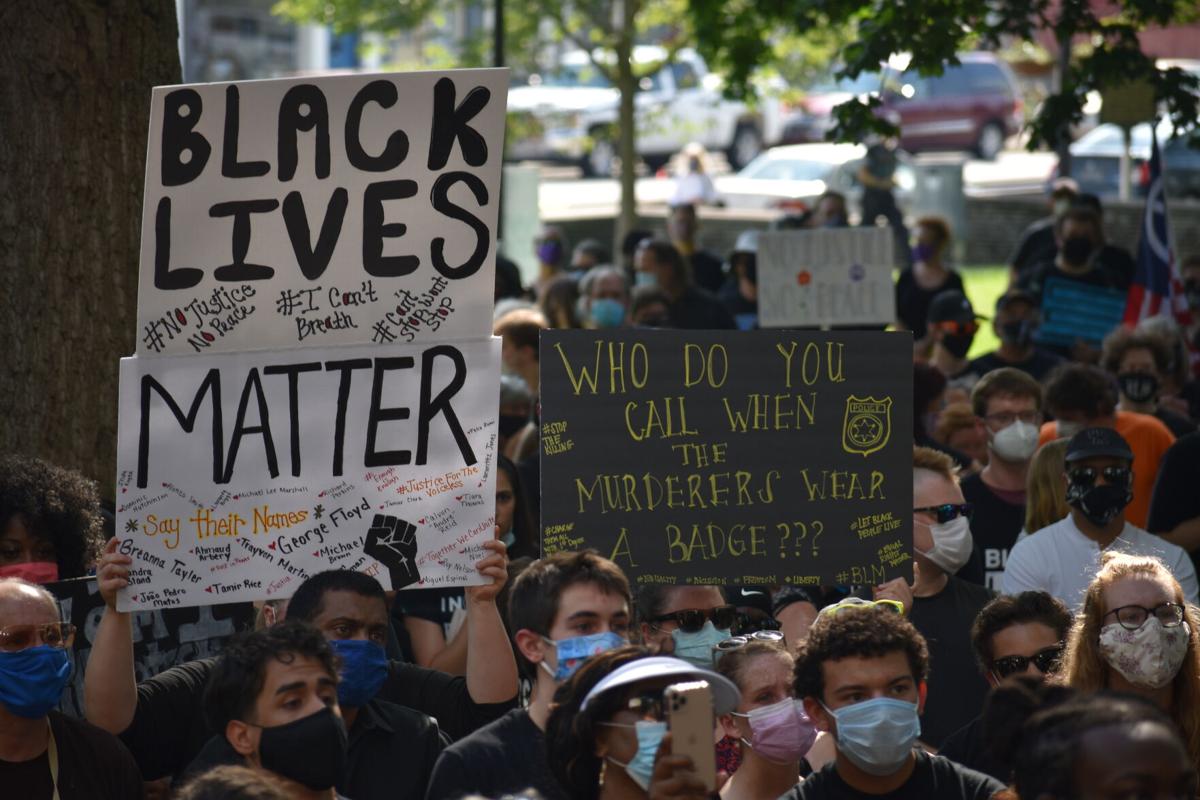 Thousands gathered on the Old Capitol lawn on West Broadway on Friday for a peaceful Black Lives Matter march to the Capitol grounds to bring awareness to police brutality and racism. (Jordan Hensley/The State Journal) 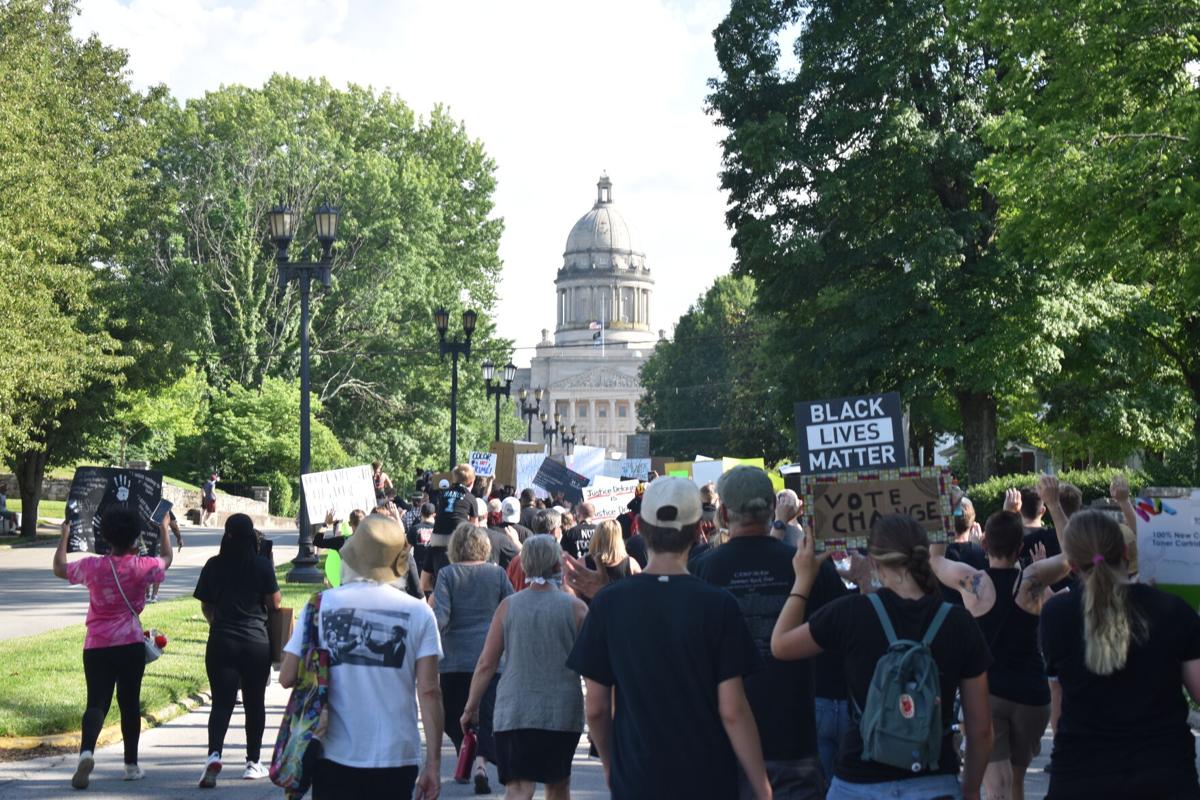 Thousands gathered on the Old Capitol lawn on West Broadway for a peaceful Black Lives Matter march to the Capitol grounds to bring awareness to police brutality and racism earlier this month. (State Journal file photo) 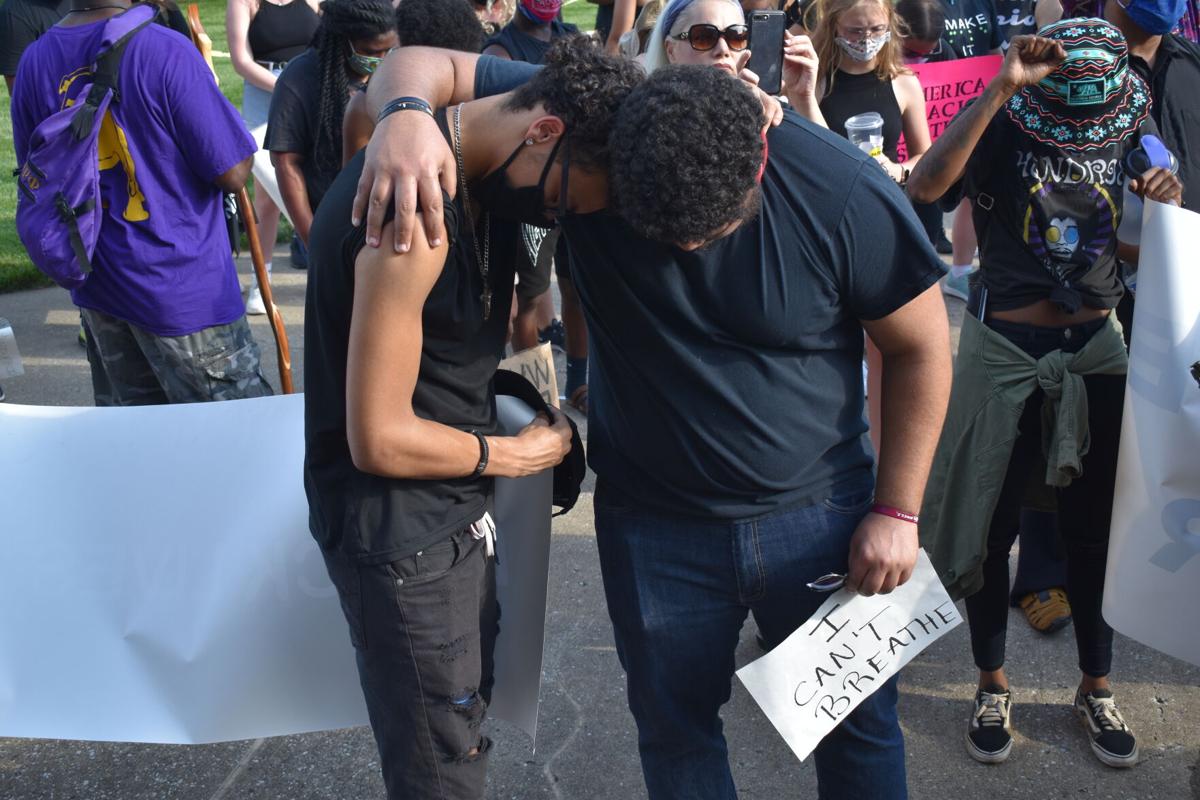 Josan Brown and Tayshan Hamilton embrace as they pray at a Black Lives Matter march on the Capitol grounds on Friday. (Jordan Hensley/The State Journal) 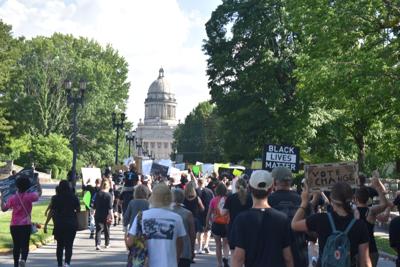 Thousands gathered on the Old Capitol lawn on West Broadway on Friday for a peaceful Black Lives Matter march to the Capitol grounds to bring awareness to police brutality and racism. (Jordan Hensley/The State Journal)

Thousands gathered on the Old Capitol lawn on West Broadway for a peaceful Black Lives Matter march to the Capitol grounds to bring awareness to police brutality and racism earlier this month. (State Journal file photo)

Editor's Note: This article was updated at 1:11 p.m. on June 6 to include remarks from Frankfort Mayor Bill May.

Although the crowd chanted “No justice, no peace,” peace was a recurring theme among those who participated in a Black Lives Matter march in Frankfort on Friday afternoon.

Shortly after 5 p.m., rally-goers, armed with masks to protect themselves from COVID-19 and signs calling for justice, equality and love, peacefully marched from the Old Capitol on West Broadway to the Capitol grounds before returning to Downtown Frankfort.

How would you describe the state of race relations in Frankfort and Franklin County?

Bowman said he participated in the march and called it "amazing."

"It was truly an honor to be part of that first step in solving problems that we have and issues, any trust issues, things like that with the community," he said.

Bowman added he's proud of Frankfort and he thinks the community set an example for the state that an event like that can happen without violence.

A group of young adults who call themselves the For the People Coalition organized the march.

“We saw things happening outside of the city and we did not want that to happen here,” said Barbara Petty, one of the organizers. “So, we just wanted to make aware of that to the community that they know they are safe. That we can come together as one — black, white, Indian, gay, trans(gender) — it doesn’t matter. We can do this.”

“Let this be a movement,” Waldridge said. “Let’s light a fire under our elected officials, our lawmakers to demand action for transformation. For this movement to bring justice, unity and peace, we must stick together as a community and demand better for justice and equality for all. We are a mere drop of water in a bucket individually, but together we are an ocean. We are mighty.”

The names Breonna Taylor, George Floyd and Ahmaud Arbery were common among the signs and posters as well as the phrases “Black Lives Matter” and “I can’t breathe.”

Friday was Taylor’s 27th birthday. Rally-goers were encouraged to sign a poster for Taylor’s family and the crowd sang “Happy Birthday” to her twice.

According to the search warrant, police believed one of the two men had packages delivered to Taylor’s residence. Taylor, an emergency room technician, dreamed of becoming a nurse and mother.

On May 25, George Floyd, of Minneapolis, died in police custody after being accused of passing a $20 counterfeit bill at a grocery store.

The video of a white police officer pinning Floyd, who was handcuffed, to the ground with his knee to the back of Floyd’s neck went viral. For nearly nine minutes, Floyd told the officer, “I can’t breathe,” until he eventually lost consciousness and died.

And then there’s Ahmaud Arbery, who died in Brunswick, Georgia, on Feb. 23. A father and son, both white men, are charged with Arbery’s murder. Arbery was jogging when the two men attempted to make a citizen's arrest of Arbery.

Arbery was known as an athlete who liked to stay in shape. He was 25 years old.

Within the last week, protests have erupted nationwide calling for justice for Taylor, Floyd and Arbery. The protests have also sought to draw attention to police brutality and racism.

A study published in the scientific journal Proceedings of the National Academy of Sciences last year said 1 in 1,000 black men can expect to die at the hands of police in the U.S.

Before marching to the Capitol grounds, the organizers and a few guest speakers spoke on the goals of the protest while reminding the crowd that black Americans have faced hundreds of years of oppression in the U.S., including slavery, segregation, racism and discrimination.

Organizers also reminded the crowd to keep each other “in check,” as the goal of the rally was to remain peaceful. No violence or vandalism would be tolerated, they said.

And so they marched. Chanting Taylor, Floyd and Arbery’s names, “Hands up, don’t shoot,” “Black lives matter,” and more.

Among the marchers was Frankfort mother Sharon Buchanan. She was marching to bring awareness to her son John Brandon Lamotte’s case.

Lamotte was convicted and sentenced to 11 years in prison for first-degree assault last year. Buchanan says her son is innocent and did not stab his neighbor multiple times in Frankfort in 2017.

“He was presumed guilty from the beginning,” Buchanan said.

“Black lives matter. I believe that should be known to people,” she said. “This is important because (racism) needs to stop.”

Rally-goer Daniel Blithe-Jones, 29, of Frankfort, told The State Journal that he loves and cares for everyone, not just black lives.

“It ain’t just black lives,” he said. “I think all lives matter, honestly. Because I’ve grown up around both sides. Love is love.”

Frankfort Mayor Bill May also participated in Friday's march, despite his cancer diagnosis, which increases his risk of contracting COVID-19.

“I need to be here," May said. "This is such an important issue that requires every voice to speak against the injustices suffered for generations. Today we are unified. We are fighting this fight together.”

Marchers were met on the Capitol grounds by Gov. Andy Beshear, who let the crowd know he will do everything he can to remove a monument dedicated to Jefferson Davis, who served as president of the Confederacy, from the Capitol Rotunda.

At that news, the crowd erupted in a thunderous applause.

So proud of my hometown. It's long past time to remake all the institutions that support and perpetuate white supremacy, and police reform is at the top of the list.

So far, I am not proud of how our hometown has remade all institutions that support white supremacy, which is the root problem here, while the media has reported it as police brutality. Police brutality is just a symptom of the root problem. White superiority manifest itself in all of our societal institutions, as most white people are completely unaware of their own white privilege! Some people can be trained to be able to see their own white privilege, while others are in total denial, and will never get it.

But without an understanding of that’s basic concept. We’re doomed to keep repeating the same mistakes over and over again.

Thanks, and also, You can't remove a life time of inherent bias with training...because the true violators aren't at all interested in learning why they are they way they are, which they don't acknowledge. That psychobabble is just elitist BS!, they'll say. You can't hire those who were torturing animals as grade school kids, send them to a military finishing school occupation in Afghanistan where they find their niche, "kicking in doors and shooting people", and who are eat up with PTSD, then give them 10 bonus points on the police force test for their invaluable service. They just aren't going to act right on your streets with a big gun and all of that authoritah! Right wingers are born not trained. That is why you can have two siblings who grew up together under the same roof, and one be a forever Trumper and the other a Never Trumper. The Forever Trumper was born without nuance and/or apathy genes. You can't correct that with training. We don't need cops with an occupation attitude, but rather peace officers. The last line of the evaluation should read: "If Black Lives Matter offends you, then you simply don't qualify." They need to find a good shrink and another line of work.

Your right that you can’t remove a lifetime of inherent bias. The word inherent is , in these situations means inherited. It is a learned bias , we aren’t born racist.

But we do have a choice in our behavior to do right or wrong.

Trump and the Republicans brought out the bias racist from their shadows they hid in , such as the Republican Ky Senator Danny Carroll ( white man)that introduced HB 1 , that supported family separation of brown skinned immigrants seeking asylum. He’s a retired police officer and took that train of racist thought to our higher levels of Government, trying to make racism a law.

Alabama man gets probation for stolen property, near crash

Frankfort Christmas Parade to be held at CCU