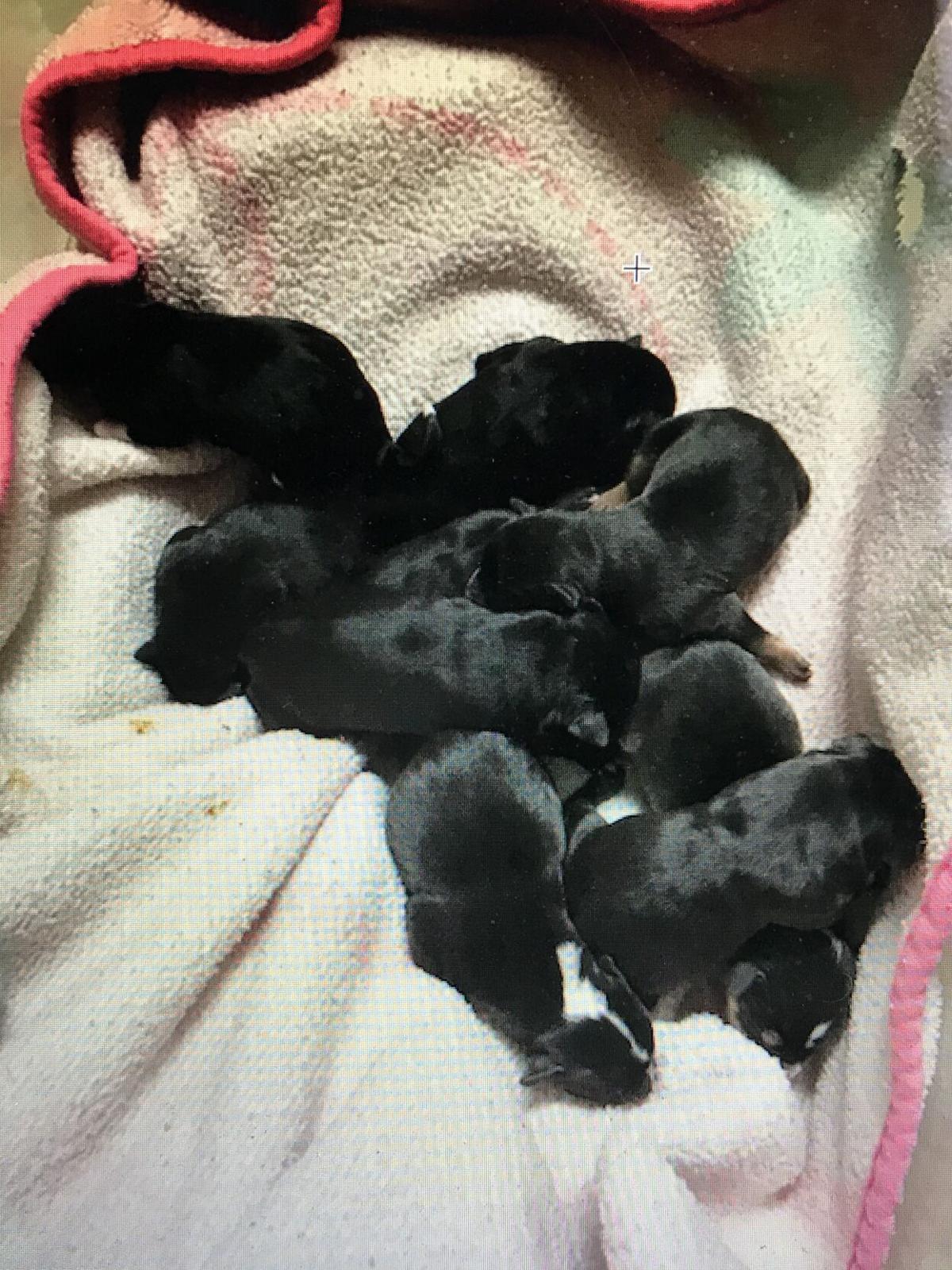 This litter of newborn puppies was abandoned on the porch at the Betty J. Martin L.I.F.E. House for Animals on Saturday night. (Photo submitted) 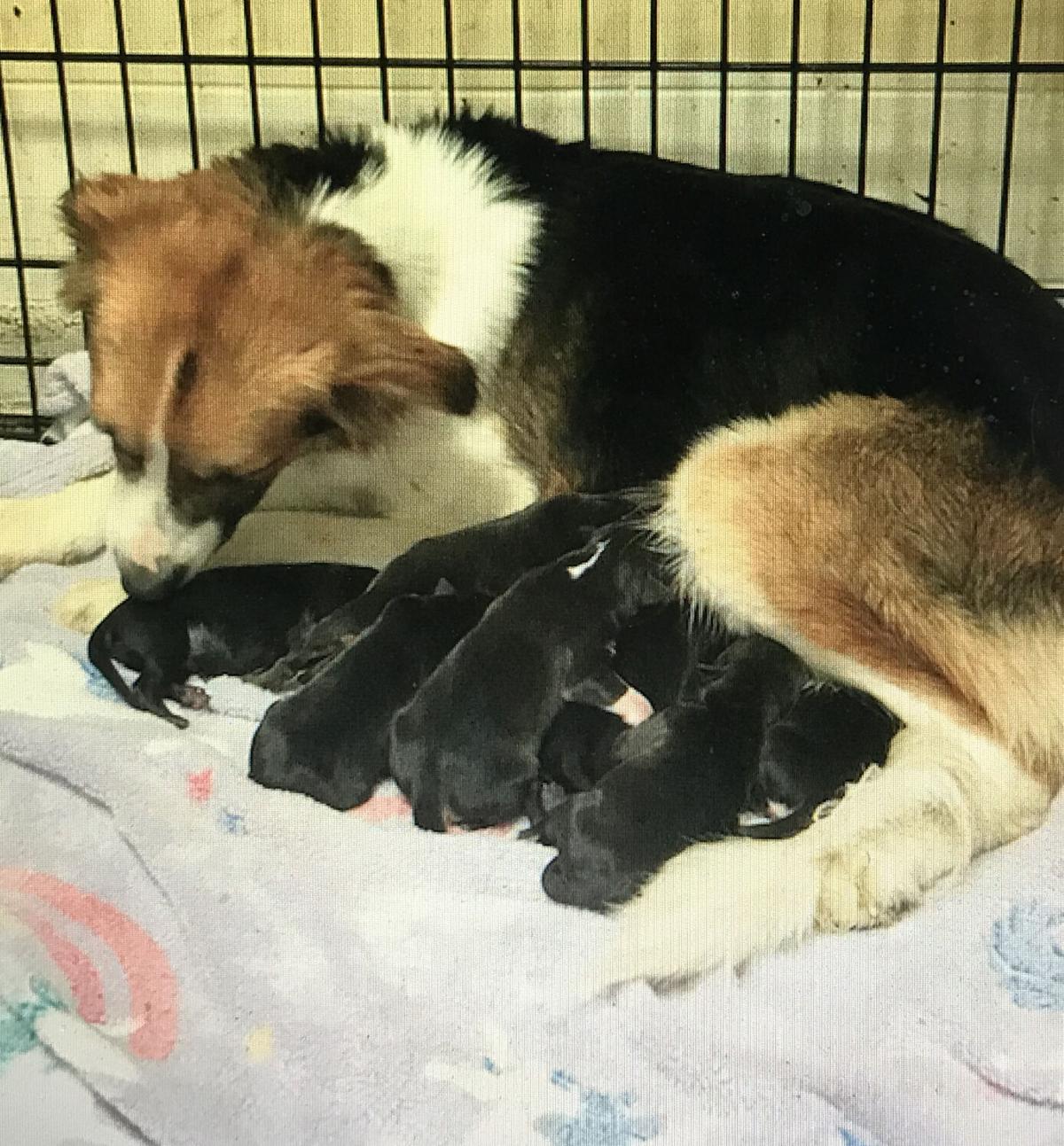 Lexi, at All Dogs Come From Heaven Rescue in Amelia, Ohio, nurses the puppies who were abandoned out front of the Betty J. Martin L.I.F.E. House for Animals. (Photo submitted)

When volunteers arrived at the Betty J. Martin L.I.F.E. House for Animals early Sunday morning, they made a heartbreaking discovery.

In a gray tub, lying on a blanket, was a litter of nine puppies.

“It was horrifying,” said Martin, president of the no-kill animal shelter at 14 Fido Court.

Surveillance video shows a woman left the puppies on the shelter’s front porch at 10:58 p.m. Saturday. The volunteers arrived at 7:30 a.m. Sunday and thought just three of the puppies were alive.

“We got them warmed up, and they were all alive,” Martin said Tuesday afternoon, “but at this point out of nine only four are surviving. Heroic efforts were taken.

“Why anyone would think this is the thing to do is beyond me.”

The puppies were taken to All Dogs Come From Heaven Rescue in Amelia, Ohio, which has a nursing dog, Lexi, who accepted the puppies.

“We found a nursing mom,” Martin said, “but making the trip was a lot of stress, and for some it was too much.”

Martin said the puppies appeared to be newborns.

“There was no effort to try and save them,” she said about the woman who dropped them off. “They were in a tub and there was a blanket, but they were on top of the blanket. She walked up like she was dropping off a bag of dog food and walked away.”

Temperatures were in the low 20s Saturday night and early Sunday morning, and the puppies were left alone for 8½ hours.

L.I.F.E. House filed a report with the Franklin County Sheriff’s Office, which has posted the surveillance video on its Facebook page.

“We are asking the public for help and information to identify the female who dropped off the puppies,” FCSO posted on its Facebook page. “Our hope for this investigation is to seek appropriate criminal charges for the suspect as well as educating the public on the dangers to animals in the current weather we are experiencing. If you would like to help identify the female in the video you can remain anonymous and send a tip to our tip line at 502-320-3306. You can also message us here on our Facebook or call our office at 502-875-8740.”

The post also stated a person can be charged with second-degree cruelty to animals (a misdemeanor) when he/she subjects any animal to or causes cruel or injurious mistreatment through abandonment.

The story makes me sick…🤮

There’s no laws prohibiting people from animal cruelty that’s really enforced. All bark and no bite. Although ever couple of years, some one that has a gazillion “ pets ” in or around their dwelling -that are abused , starving in unsanitary conditions is slapped on the wrist after the fact . The people that abuse these animals are usually some self righteous thinking individuals that considers theirselves as a “ savior “ to pets - then the pet food donations and $ runs out and the starvation and mistreatment starts . We’ve all seen or heard stories of it all our lives . These self righteous individuals are mainly ignorant and poor themselves and I suspect in the back of their minds when the private $ donations come in for pet care they think “I’m spending some of this on myself!”