The Frankfort City Commission unanimously approved a development agreement Monday that inched it closer to an arrangement regarding the redevelopment of Parcels B and C in downtown Frankfort.

The city shared late last week the details of its development agreement before voting unanimously to pass it. 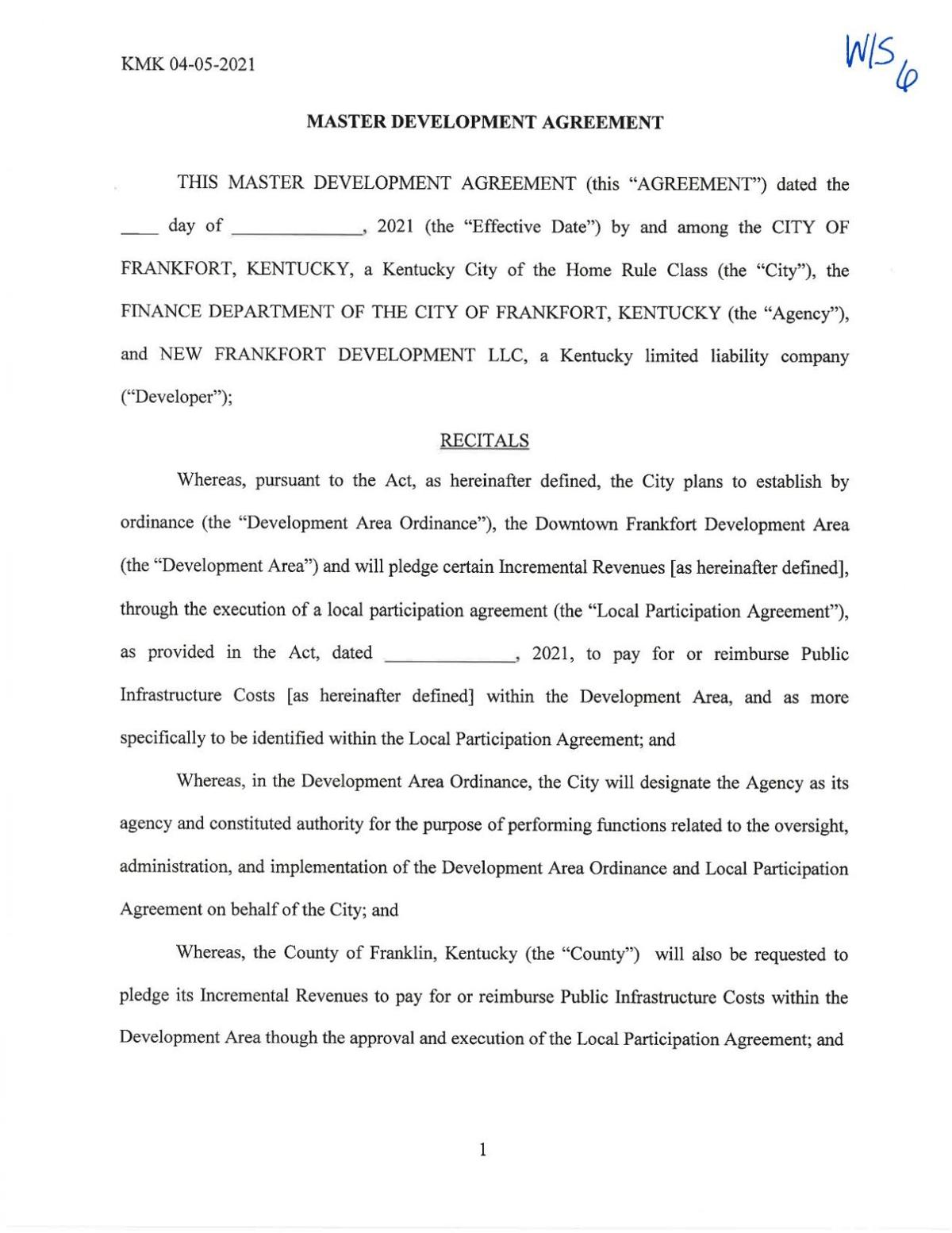 Per City Attorney Laura Ross, the agreement commits landowner Marty Johnson of New Frankfort Development and developing partner CRM Companies "to comply with the project vision, which is roughly a $50 million project," including apartment-style housing, retail, office and parking space.

Mayor Layne Wilkerson stressed at Monday’s meeting that any potential agreement between the parties would go back to square one if the city does not receive a $5.5 million federal grant to build a transit center along with a state-mandated parking garage.

Central to the document is the city’s commitment to construct a 300-space parking garage with a transit center included. Half of the parking spaces in the $8.5 million garage and transit facility must be dedicated to the Capital Plaza Hotel, according to the deed transferred from the state to New Frankfort Development when it purchased the mostly vacant 12 acres of former Capital Plaza land for $1,000.

The construction of a garage would satisfy the state’s longstanding contractual obligation to the Capital Plaza Hotel. A prior garage for the hotel was demolished along with the Frankfort Convention Center.

The city has said it will likely issue bonds to fund the extra $3 million to construct the garage, and that the construction is contingent upon approval of the federal transit grant and the receipt of a one-year extension from the state of the time required to have the parking garage constructed.

Craig Turner of CRM Companies has committed to extending Washington Street two blocks north to Mero Street for roughly $1.5 million and giving the street to the city for public use.

Specific Tax Increment Financing (TIF) contributions will not be laid out or sought until the city, county and developer later agree on a Local Participation Agreement, though the agreement includes language about “activation” of the TIF no later than four years after the executing the participation agreement.

Tax Increment Financing is a process by which taxing entities like the city and county can commit future marginal tax revenues caused by a development project to reimbursing public infrastructure costs.

As public infrastructure, the parking garage, Washington Street extension and other items could be eligible for reimbursement through future TIF revenues.

Next steps include getting all parties to agree to participate in the TIF District, adopting a city and county ordinance, then submitting a TIF application to the state Economic Development Cabinet.

Read the entire development agreement, agreed upon by both parties, at the following link: https://tinyurl.com/5xkr2vfw. 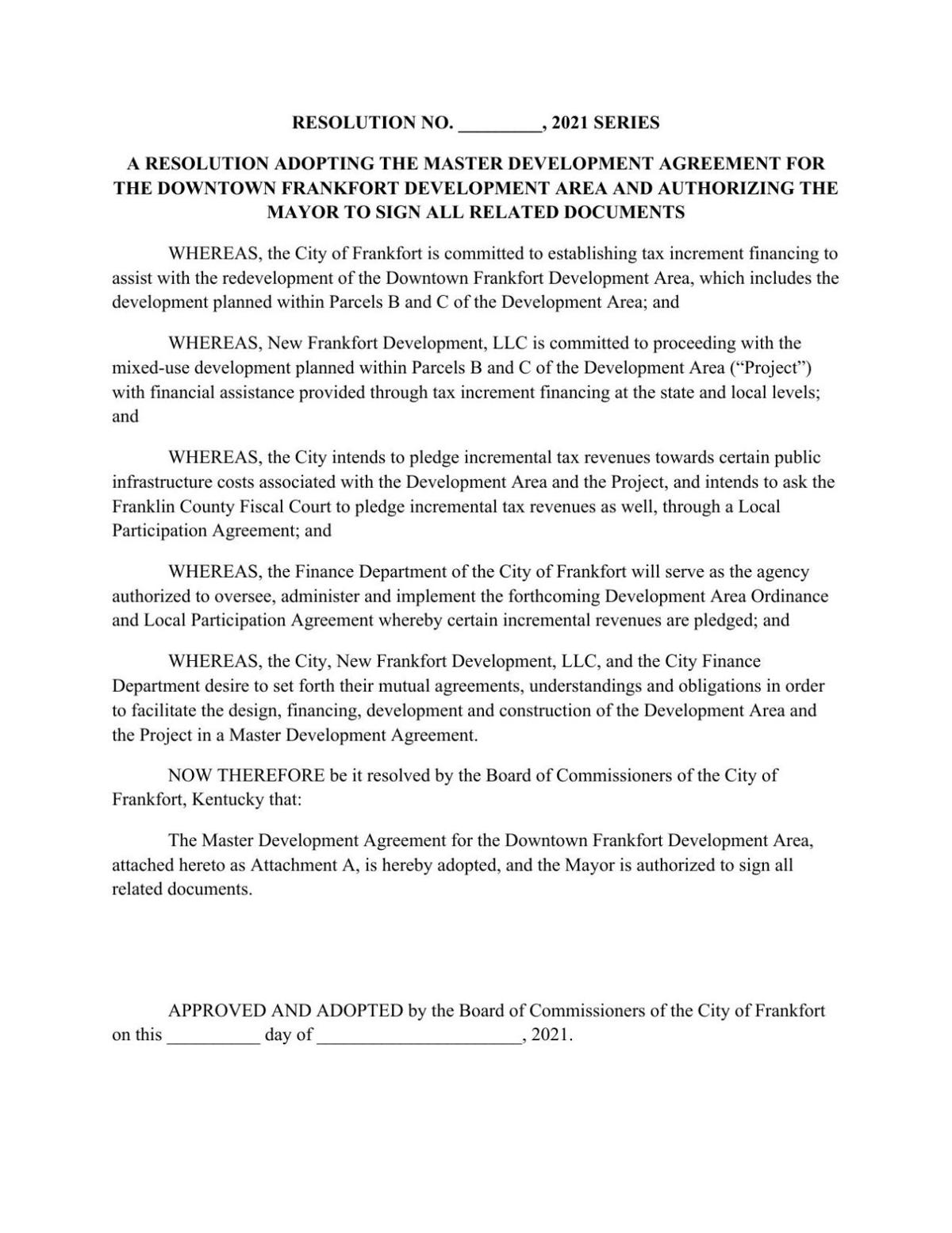 What if there are no TIF revenues? What if this whole commercial district is a bust, just like it was back when the capital plaza first opened up? Those businesses went out of business in a few years, and that was before the brick and mortar commercial district breakdown. The trends aren’t real favorable for this, you folks realize that don’t you?

The way it looks now is that we’re going to be out $10 million and have really nothing to show for it.

Maybe they can open another Subway ? I heard the one downtown is closing for lack of business. And another Gibbys since the one we had closed , and another Mitchell’s clothing store - that’s ones out of business. — did I miss any?

I will bet dollars to donuts that this fantasy $50 million redevelopment that Marti Johnson tacitly has committed to will never get off the ground. Ten years in the future, there still will be a hodgepodge of nothing down there, that will more closely resemble what is there now than any grandiose commercial district. I got faith in Marty. Not!