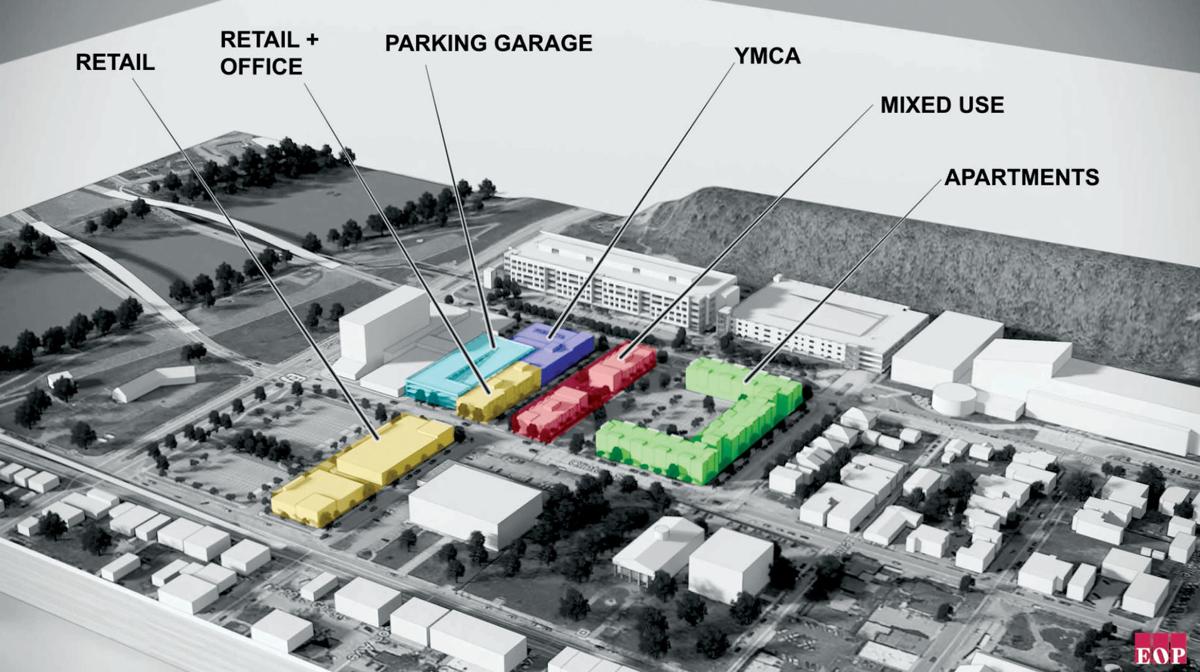 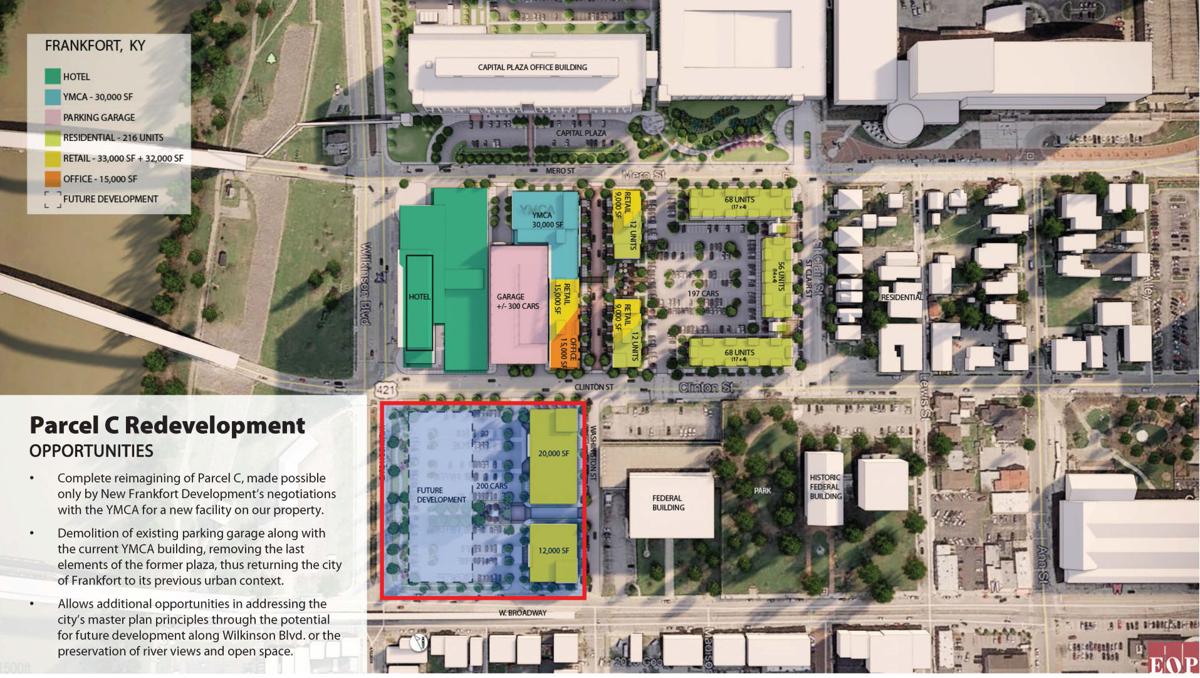 Johnson, a Hazard-based developer and businessman and the sole bidder, was awarded Parcels B and C by the state Finance and Administration Cabinet in November. He bid $1,000 on the property.

The nearly 12-acre property is the site of the demolished Frankfort Convention Center and adjacent Fountain Place Shoppes. The property also includes the land under the YMCA and Capital Plaza Hotel along with an existing state parking garage.

The 124-page proposal shows NFD’s vision for the parcels, which includes 200-plus residential units, and reveals the team NFD plans to hire to develop the land. 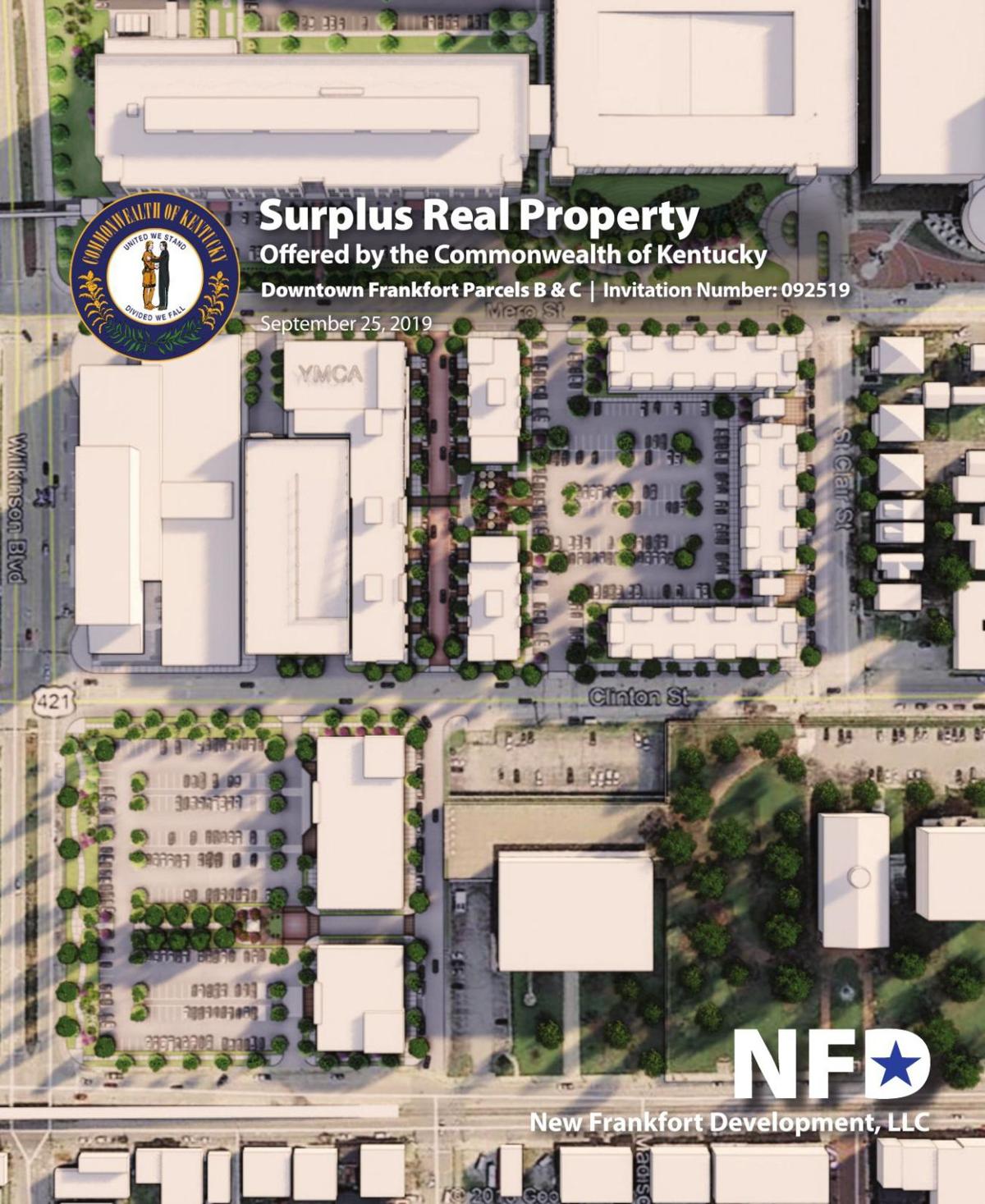 In November, Johnson told The State Journal he “would like to get a deal done for a new YMCA.”

The proposal, dated Sept. 25, 2019, mentions Johnson has already been discussing the possibility of constructing a new YMCA building with its staff and board.

“The NFD team is proposing a new two-story, 30,000 square feet YMCA at the northwest corner of Mero and the Washington Street extension,” page 53 of the proposal reads. “The new YMCA will include extensive building transparency to enhance the YMCA experience and activate pedestrian and street edge. (Please see letter from YMCA CEO David Martorano at the end of the section).”

On page 64, the Sept. 16 letter written by former YMCA of Central Kentucky CEO Martorano confirms NFD’s intent to relocate the YMCA from its current location on West Broadway Street.

Martorano resigned as the YMCA’s CEO on Nov. 1 to accept a new position with YMCA of the USA.

The State Journal called and emailed interim CEO Paula Anderson and called Frankfort YMCA Board Chair Paul Harnice on Dec. 27, but did not receive a response for request to comment on NFD’s plans by press time.

Jerry Grasso, vice president of marketing and communications of the YMCA of Central Kentucky, however, responded.

“We continue to talk to all relevant parties and no decisions have been made,” Grasso said.

The State Journal also contacted Johnson via email, phone call and text message over several days but did not receive a response from him by press time.

As for the Capital Plaza Hotel, NFD hopes to add on to the building using the empty retail space of the Fountain Shoppes.

“The NFD team is purchasing the existing Capital Plaza Hotel and will completely renovate and re-imagine both the building’s exterior and interior by reorganizing the interior public spaces, restaurant and bar and increasing the amount of meeting space by over 7,000 square feet,” page 52 of the proposal reads. “The hotel’s new vitality will contribute to the unique character of the community and play an integral role in the overall Parcel B&C development.”

According to the proposal, NFD envisions the revitalized hotel will encourage and foster a connection with bourbon and local tourism.

The proposal describes the deal with the Capital Plaza Hotel as exclusive.

Notably absent from the proposal was a letter from the hotel's parent company Stonebridge Hospitality LLC confirming the deal.

The State Journal attempted to reach Marc Stone with Stonebridge Hospitality LLC in-person, by phone and through text messages since Dec. 27, but he did not respond to requests for comment by press time.

To bid on the parcels, Johnson had to stick to a list of requirements, which included incorporating the Downtown Master Plan’s ideas for a mixed-use residential and commercial development and a state-mandated 300-space parking garage to meet contractual obligations to the Capital Plaza Hotel.

NFD’s proposal reveals its plans to develop the space for retail, residential, cultural, institutional and entertainment uses while improving walkability.

All of these plans are preliminary, as Eric Cockley, director of planning and community development for the City of Frankfort, told The State Journal in November.

The projects will involve a change in zoning and development plan review through Cockley’s office.

Johnson said in November the newly proposed parking garage is estimated to cost $4 to $5 million.

According to the proposal, the garage will have vehicular access from Mero Street and Clinton Street.

The plans also include a proposal to extend Washington Street. Two-story structures of nearly 33,000 square feet will be the new home for retail and restaurants. Nearly 15,000 square feet of small business office space and 24 residential units will also be constructed. The proposal says NFD envisions the street remaining two-way traffic with parallel parking on each side along with 15-foot-wide sidewalks.

Along St. Clair, Clinton and Mero streets, NFD plans to construct 192 new residential units 15 to 20 feet from the street edge along with a 197-space parking area.

To make this project possible, Johnson isn’t working alone. NFD has two other partners, but Johnson has been hesitant to name them without their permission.

The proposal does name the development consultants, contractors, architects and designers.

NFD plans to use CRM Companies as the development consultant. Their most recent work includes the 300 Building and the freshly opened Mayo-Underwood Building.

Three other companies that worked on the 300 Building and Mayo-Underwood Building have also been chosen. EOP Architects will responsible for architecture and interior design. CARMAN was selected for site and landscape design, and D.W. Wilburn Inc. was selected as the general contractor.

The financial options, however, were not redacted.