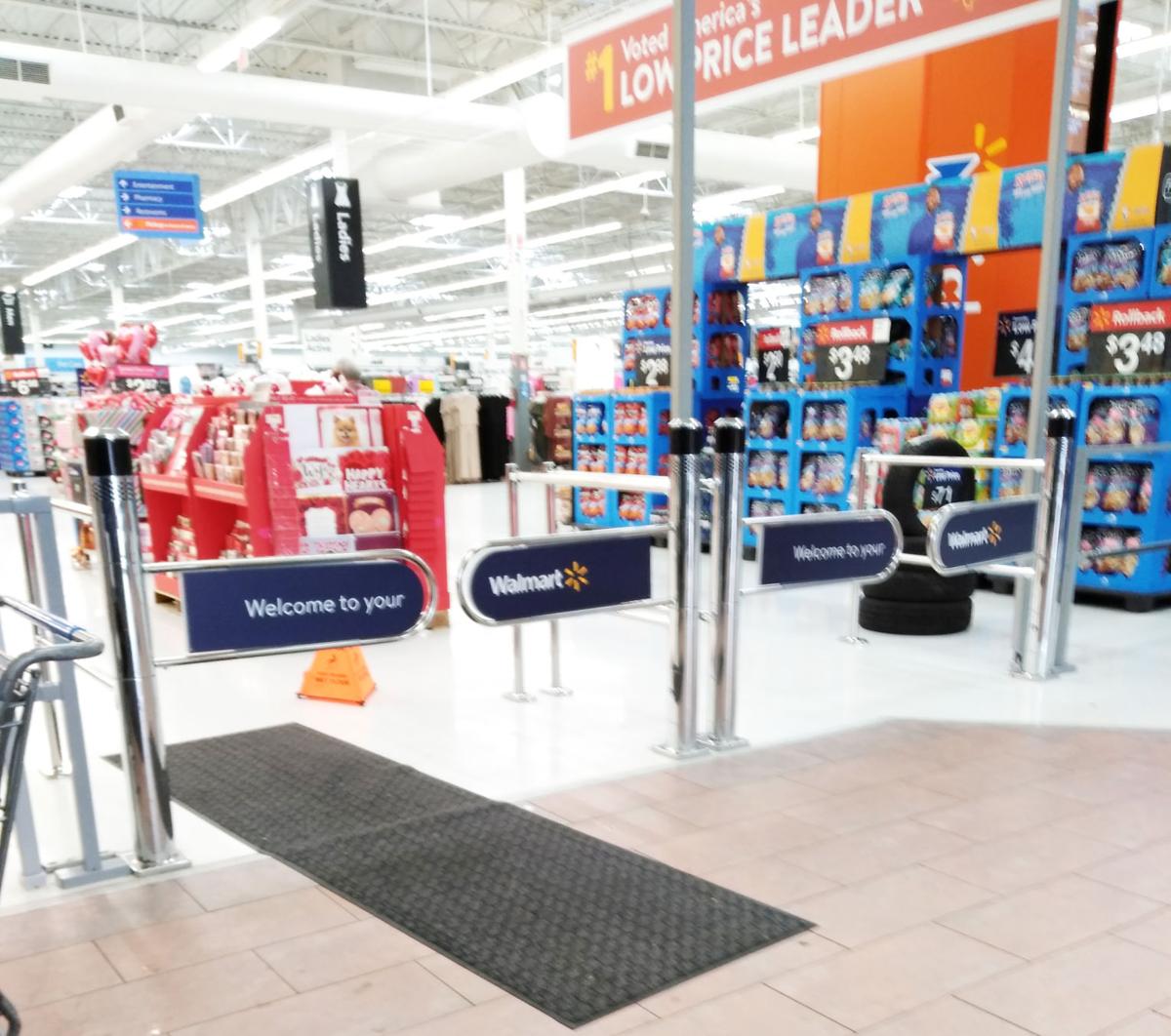 Walmart in Frankfort has installed "customer access gates" at both entrances. 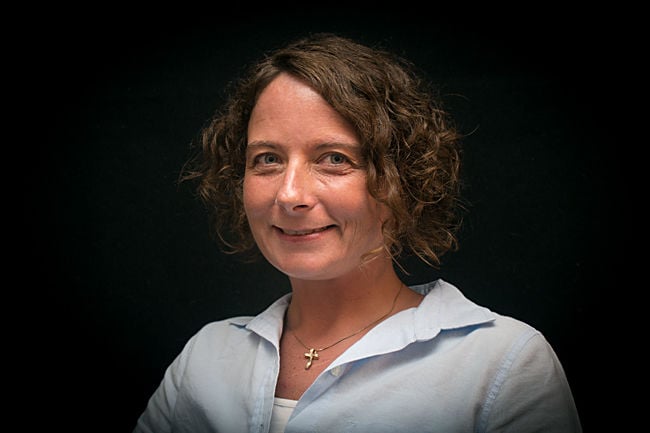 Most stores go above and beyond to roll out the red carpet for their customers. Apparently that isn’t so at Walmart — which is guarded as if Fort Knox gold is inside, not rollback prices on supersized Arm & Hammer OxiClean fresh scent liquid laundry detergent and 48-count packages of Energizer AA batteries.

An infrequent shopper of the multinational retail chain (peopleofwalmart.com — need I say more), I was stunned to see new gates guarding the entrances the other day when I was forced to make a quick stop at the store for a few essentials — not treasure.

The “customer access gates” — as Walmart so pleasantly puts it — are motorized and open when slight pressure is applied. The big box business began installing the new gates in 1,300 locations nationwide as an “anti-theft precaution” and “to welcome our customers to our stores,” according to Walmart spokesman Phillip Keene.

Oh, sure, because nothing is more inviting than the words “welcome to Walmart” written on metal gates that customers are herded through like cattle.

Gone are the retirees whose smiling faces greeted shoppers at the door with chit-chat, a shopping cart and bright yellow happy face stickers for the little ones.

Now Walmart, which likely has more surveillance cameras than the Capitol, employs “customer hosts” in an effort to deter shoplifting, which is a constant issue for the company. Just glance at The State Journal police and fire blotter and you’ll likely find a few theft entries from the Frankfort store.

With the implementation of its “More at the Door” program in 2016, Walmart replaced those sweet, retired greeters with the yellow-vested “hosts,” whose main job is to scan customer receipts as they leave to ascertain that no one is making off with more than they paid for.

Perhaps the idea sounded good on paper, because in practice it feels obtrusive. When the gray-haired gentleman “host” checked my receipt the other day, it made me feel as though he was scrutinizing my purchases.

I debated whether to rattle off the reasons I needed a 24-pack of Mountain Dew Zero Sugar and a large box of Colombian coffee K-cups. But I decided it wasn’t any of his business that we are attempting to wean our two teenage boys off regular soda and I am in the newspaper business and need all the caffeine I can get.

This is just an observation, but maybe Walmart wouldn’t need to check customer receipts if it employed more folks to work the 20-plus registers that sit vacant, forcing shoppers to scan their own purchases at the self-checkouts.

Surely, one of the world’s largest companies can find a way to curb theft without making customers feel like criminals every time they enter and exit. Because, if not, its “More at the Door” program might just prompt more shoppers, myself included, out the door.

Chanda Veno is managing editor of The State Journal. She can be emailed at chanda.veno@state-journal.com.

That is funny,” welcome to Walmart “ written on a gate impeding your entrance!! Kinda like “ We hope everyone is resting well” at the entrance to a cemetery”! ……?……Avoid them by going to your left thru the self check out!

Walmart has the least expensive cotton cargo pants I like ! Made in Bangladesh! Where is that in the world ??!

Walmart has a great online store , much like Amazon, and prices that beat the others often. No thieves gate there! What is the “ carbon footprint “ in jumping in your car going from brick and mortar store after store? And what’s the “ carbon footprint “ in sitting at home , ordering online , waiting for the giant box delivery truck pull up to deliver your small package ( or big!) that’s quadrupled wrapped ( five times more than in the store)?

"An infrequent shopper of the multinational retail chain (peopleofwalmart.com — need I say more), I was stunned to see new gates..."

Think of all the people who have to shop at Walmart because it's either the closest or the cheapest place for them to buy essentials. That Walmart helped precipitate this fact by their ruthless competitive strategies is beside the point: in an economic environment where income and wealth inequality are reaching staggering levels, the minimum wage hasn't budged from $7.25/hour since 2008, and competing retailers can't afford to stay in business, Walmart is the only game in town for many low-income consumers.

It's great that you can afford to shop elsewhere and so that you can infrequently come face-to-face with Kentucky poverty, but maybe you could have written this in a way that didn't reinforce the pride in your superiority over people who very well may read and subscribe to the State Journal. Or perhaps it's the fact you expect they wouldn't read that encouraged you to mock them?

I’m sure that the clothes- ect. where the rich folk shop and the poor at Walmart are all made in the same Asian countries across the ocean. The seamstresses just sew a different “ label” on for the rich folk! The clothes ect at Walmart cost pennies on the dollar even there. The rich folk stores is even less ( fraction of a penny? ) of a cost from the mark up. If half is sold they still profit, who knows 1,000% ? They buy a pallet of blue jeans for average $1 a pair for 200 pairs - put them on the rack or shelves for $25 each ? Rich folk store even more? I’m guessing of course! Bet I’m in the ball park! There’s probably enough new clothes in the US right now to last most of us the rest of our lives if all manufacturers stopped making clothes today! What a materialist bunch we are! Ha!

I am sure that Wally World’s losses to theft are astounding! Its profit margins are low, so it does not take much loss to eat up the profits. Hint: use only the live checkouts instead of the self checkouts, as the lines will force them to hire more people. Also, when you leave, have your receipt at hand, and make eye contact with the minder, walk straight to them with a smile and try to hand it to them. Almost always they will wave you through with no delay, as you simply don’t for the profile of someone trying to sneak out with stolen merchandise.

I use the self-checkouts at most stores that use them for one reason: I can almost always get myself out of there much faster than waiting in any line with a cashier. Cashiers just don't seem to be in any real hurry at any store. I'd be in full support of a line with a cashier if it moved with any kind of efficiency. By the way, I've been in Walmarts with long lines for the few cashiered registers that were open. Walmart doesn't take any action to open the several registers that sit there idle. When I see long lines like that, I just walk out and come back later...or go somewhere else. I doubt long lines would force them to hire more people.

They have people to surveil you while you're shopping, but try to ask someone for assistance in finding anything and it's "not my job" time.

I had to call for a manager recently because I was treated rudely while trying to locate a product to no avail.

Don’t throw the baby out with the wash! Don’t forget the Massacre at a Walmart in Texas that left 20 innocent Hispanics dead , at the hands of white racist murderer. Walmart is scrambling to make some kind of assurance for its customers, and I’d think they’ve been shaken to the core about the morality of people. If Walmart could go back in time and stop that massacre they would more than likely leave no stones unturned to prevent it. The company still has competitively priced items that feed and cloth us . I can make fun of Walmart but in the end I hope the best for them !

"Surely, one of the world’s largest companies can find a way to curb theft without making customers feel like criminals every time they enter and exit."---Easy to complain. More difficult to come up with an alternate solution. Blame the thieves. Not the victim. You go to Walmart to save money. Be glad they are trying something to stop the losses.

As a white man of some advanced age, I have never felt like a criminal anywhere, much less at Walmart, in the past or now. If you don’t act like a criminal, you usually don’t get treated like one, unless of course, you are black or brown. Then, all bets are off. For all of you white folks out there complaining about being made to feel like a criminal simply because they put antitheft gates at the entrance, try to use this as a teaching moment. Then try to imagine how you would feel if you had someone following you around in every store that you went into, and that would be kinda like being black, not counting on all of the other times, like getting pulled over by the police all of the time, or when you try to get a job. But I regress...

In my prime , I could leap across those anti theft gates in Walmart! Matter of fact I could shove them open now! My 5 year old grandson can easily get past them! I’m really not sure what they were engineered for? A child’s play gizmo? They are shiny! Be pretty decorated for Christmas !

True! The fraction of a percentage of us that steal , cause the rest of us to be treated as suspicious! All the cost of all those checkouts that aren’t manned ( or womanned)? They’re silly about installing those in aren’t they? Ha! Don’t Forget the parking lots build 2/3 to bid ! All that beautiful blacktop setting there empty for the rain runoff to help flood our natural streams and creeks in an unnatural way. What about all the McDonald’s now looking like jail’s , with no windows! They did cut out unused order counters. But put the little Self order, crazy one out in the middle of the standing area ! Funny!